Victoria Jeffers joined Blue Ventures as its information communications and technology (ICT) project coordinator in September 2014. She helps to coordinate its project to assess shark fisheries in Madagascar via mobile phone and is piloting the system across other Blue Ventures projects.

I’ve been living and working in Madagascar for six months now and in early March I visited the Blue Ventures project site at Belo sur Mer in western Madagascar. It was here that I had probably my most exciting work-related moment yet. I’m usually based in Andavadoaka, about 160 kilometres south of Belo sur Mer, where part of my job is overseeing the day-to-day running of the shark monitoring project. In eight sites around Andavadoaka we have community-based monitors who are using smartphones to collect data about the shark fisheries. The monitors in the south-west have been doing this for nearly two years, using both mobile phones and traditional exercise books and cameras. The aim now is to wean them off the paper collection and have all data entered directly into the phone.

With Dan Barrera, the project coordinator for this site, my first task was to recruit a new data collector for the Menabe region, where Belo sur Mer is situated. We met Farakely, a local fisherman from a small coastal community near Morondava early on Saturday morning. Recommended by our local boat captain, Eloi, Farakely seemed keen to get involved in the project, but had limited experience using a mobile phone. In fact, he had never used a smartphone before! We spent a couple of hours teaching him the basics: how to use a touch screen, how to unlock the phone, how to delete mistakes, how to make phone calls – all things that you and I probably take for granted.

We eventually moved onto the data collection process itself. ODK (Open Data Kit) Collect is the app we are using to collect data and we have created specific forms to input exactly the data we need and photos of the sharks caught. These data can then be sent directly from the phone, eliminating the triple-entry checking system that currently exists. Our aim has always been to have instantly accessible data that we can share with the communities and other interested parties. 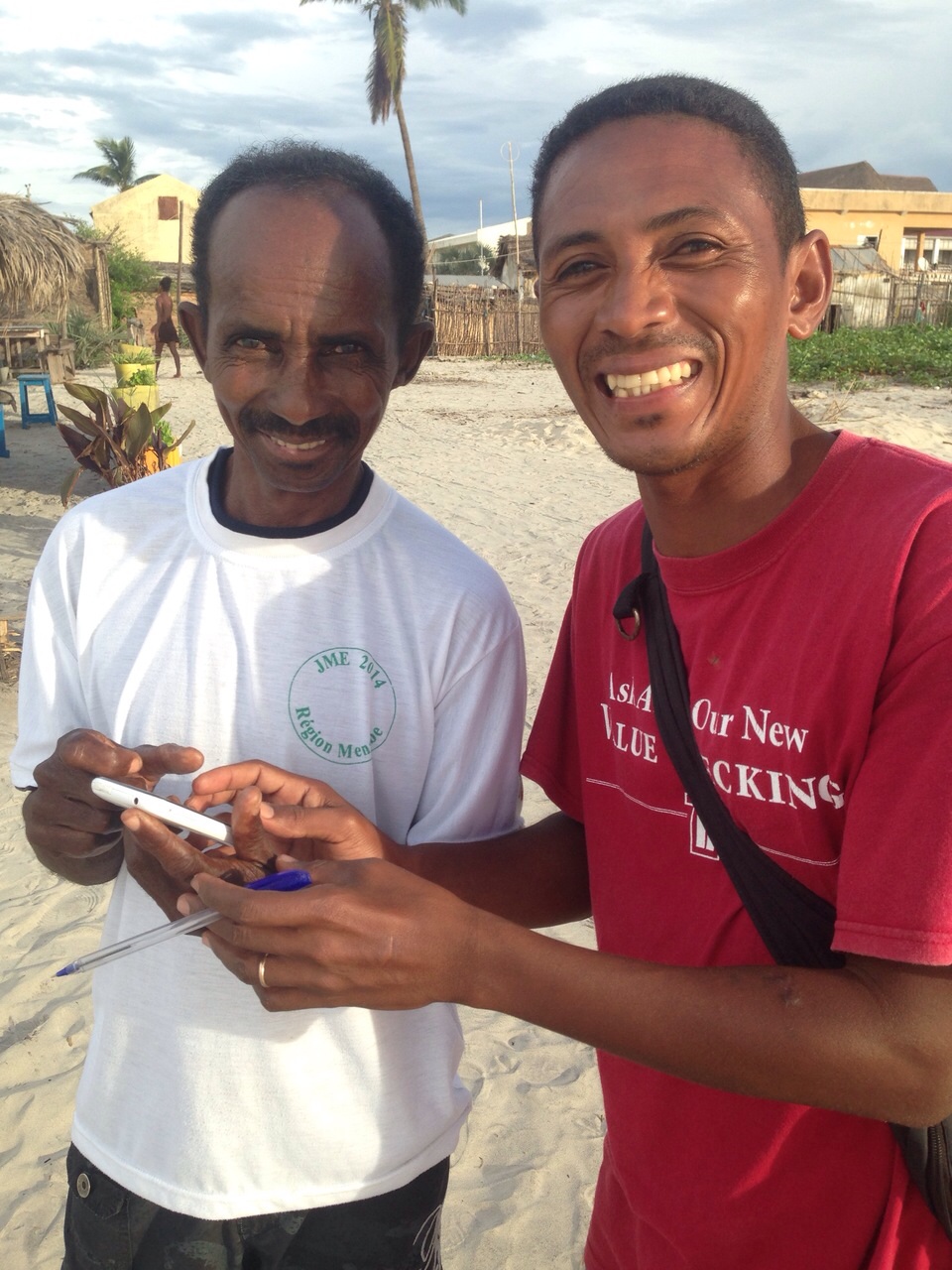 Farakely (left) and Emmanuel pose with the smartphone after Farakely has successfully learnt to collect data. © Dan Berrara

Although quite slow to start with, Farakely was a fast learner and seemed to get the hang of things fairly quickly. After a few hours we left him and agreed to meet again in a couple of days. We set him some homework, an ambitious target to complete 10 practice forms. When we next met him he hadn’t managed to fill in any forms but still seemed confident and happy, although he was struggling to take pictures. We gave him another mini tutorial and arranged to see him again at the weekend.

I spent the next few days in Belo sur Mer teaching the staff how to use ODK and meeting up with existing data collectors to train them on an updated data entry form I had designed. At the same time, I encouraged them to use their phones rather than their exercise books. When the weekend came round we met Farakely again and he had completed four forms with real data. He thought that he had filled in more and was slightly confused about the number of sharks he had seen. The look of frustration and disappointment on his face when we explained his mistake was heart-breaking.

At this point I made everyone take a step back and reflect on what he had achieved. One week after never having used a smartphone before, Farakely had managed to complete forms on his own and had data that were ready to send. He had achieved what it had taken multiple training sessions and many months to achieve with other data collectors. A little smile of satisfaction and shy pride formed on his face when we pointed this out to him and congratulated him on what is a massive success for the shark project and also a fantastic personal achievement. He was happy and I was so proud of him!

Blue Ventures has recently produced a factsheet summarising our project to use smartphones to improve small-scale fisheries management.