It’s been a busy few months at Shark Spotters. On 1st June 2012 we expanded our programme to a seventh beach, the Caves, Koeel Bay on the eastern shore of False Bay. The Caves was the site of the tragic shark incident in April and following requests from the public we explored the possibility of spotting in the area. After a review of the area and a pilot project we determined that it was possible to deploy a full-time spotting programme and The Caves site has been up and running successfully since 1 June. During the pilot study we recorded 9 shark sightings, and the last sighting at Caves was on 19 June. Local fishermen have also provided us reports of sharks sighted in the area. It’s encouraging to see locals returning to the area to surf and we are pleased to offer this beach safety initiative to a new community of ocean users. The support we have received from the public for the expansion of the program has been phenomenal and we would like to take this opportunity to thank Bruce Tavenor, for donating the flagpole, and Reef Wetsuits, BulkSMS and Terracor for your cash donations which have made an invaluable contribution to covering the costs of this new operating beach. 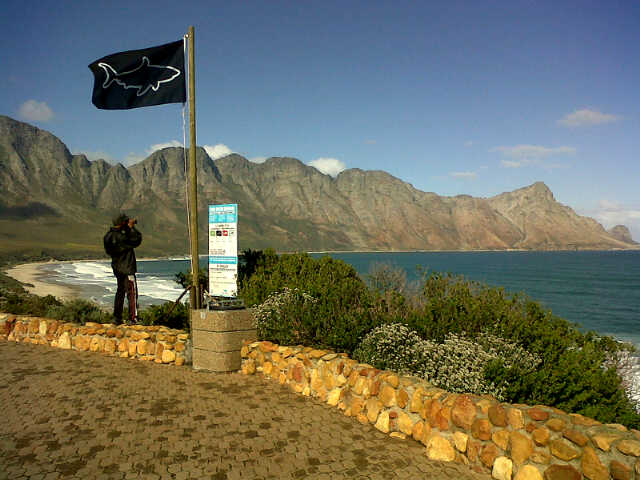 The good news didn’t stop there. In 2007 the City of Cape Town committed five years of funding to the Shark Spotting program, which came to an end in June this year. Following an external audit and review of the programme, we are happy to report that the City has committed to funding the program for a further three years, until June 2015. We are extremely grateful to the City for their continued support of the program and for recognising the valuable contribution we are making to the communities by enhancing beach safety at the City’s popular beaches. Shark sightings are at a low at the moment which we expect at this time of year. The last sighting on a Shark Spotter beach was 19 June at Caves, Koeel Bay, and prior to that the 22nd May in Muizenberg. During the winter months the sharks aggregate around Seal Island, to feed on young of the year seals and are therefore not seen as frequently on the inshore areas. We do however continue to operate throughout the winter months, as sharks may still be found inshore in particular conditions, especially if there is something there that may attract it, such as large schools of fish or a whale carcass. Therefore the Spotters remain vigilant throughout the winter months. Based on our tracking and sightings research we expect the inshore sightings to increase at the start of spring again and will issue a reminder closer to the time. 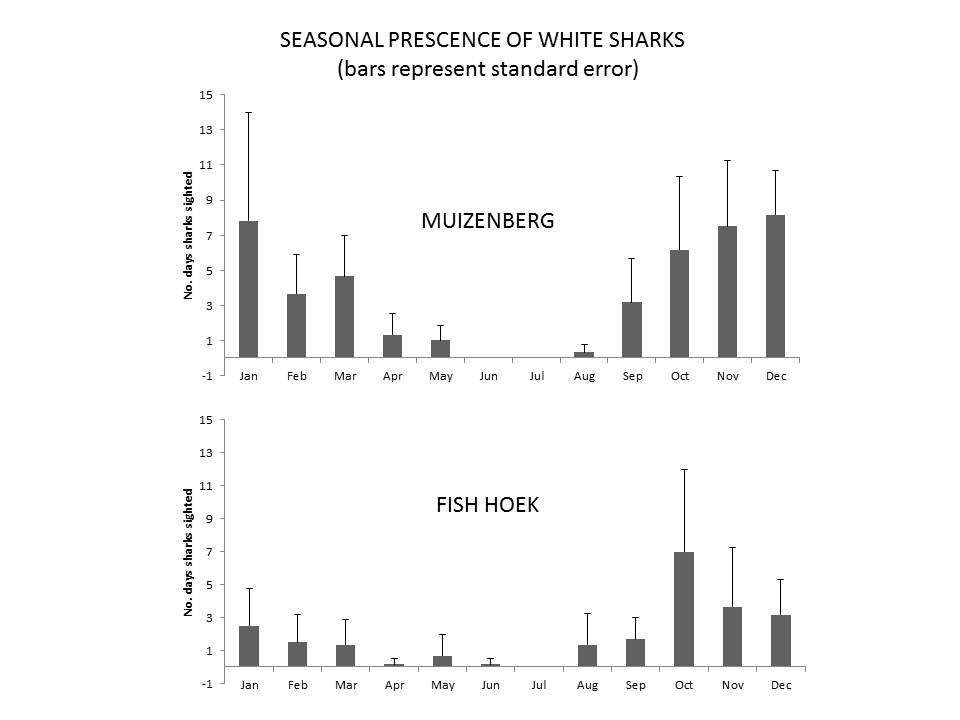 With the beaches a bit quieter in winter we like to take the opportunity to do some valuable training with the team, increasing their knowledge of the ocean and its animals, and developing and enhancing their skills as spotters. This year will be particularly interesting as we will focus on the new developments from the, teaching the spotters about the valuable information we have gained from the data they collect on a daily basis. In June our research manager attended a human-wildlife conflict training course in Gaborone, Botswana (http://www.humanwildlifeconflict.org) where she learnt about conflict analysis, studied case studies from across Southern Africa and best practices. This information will be passed on to the spotters to enable them to better manage conflict situations they face on a daily basis. The training will also include the spotters completing their First Aid Level 2 certificate, and refreshing their shark incident protocol training.

Educating the public about sharks, shark behaviour and how the programme works is essential to beach safety and in the last few months we have given public presentations to the Friends of Silvermine and the Newlands Rotary Club. We are also pleased to be part of the Save Our Seas Shark Centre’s Marine Conservation Speaker Series where we will be speaking on 19 July ) .

We have recently published a new study. Shark Spotters is often asked how effective the electronic shark repellent Shark ShieldTM is and in 2010 and 2011 we collaborated with Dr. Charlie Huveneers from South Australia Research and Development Institute and other colleagues on the first scientific study to test their effectiveness at repelling white sharks. The effects of the electric deterrent were tested under two different situations i.e. using a seal decoy in South Africa and under baited conditions in Australia. The results showed that the deterrent did have an effect on the behaviour of white sharks under certain conditions, but that it did not repel them in all situations. It also found no evidence that the deterrent attracted white sharks. A full copy of the report can be found here (http://www.sharkspotters.org.za/wp-content/uploads/2012/06/Huveneers-et-al-2012-Shark-Shield-testing_SafeWork-SA.pdf).

And finally, a valuable resource for any ocean user is the launch of a new website which allows anyone interested to track satellite tagged white sharks alongside researchers who are seeking to gain ground breaking information on the ecology and behaviour of sharks. The website www.sharks-ocearch.verite.com allows you to see which tagged sharks are currently in your area and explains how to follow their travels online. The researchers tagged a small percentage of the total population, but these tagged individuals can provide information about what the population may be doing. So far the tagged sharks have undertaken remarkable journey’s such as travelling from Mossel Bay to Namibia and back, and travelling from Struisbaai to northern Mozambique, a journey already more than 3000 km. It’s also highlighted many coastal aggregation sites. The tracks can help you see whether some sharks may be using a specific area for extended periods of time, or whether they are travelling through the area. In time, patterns and trends in seasonality and timing may become evident. We encourage people to use the tracks to learn more about the sharks in their area. Warning, the website is addictive! 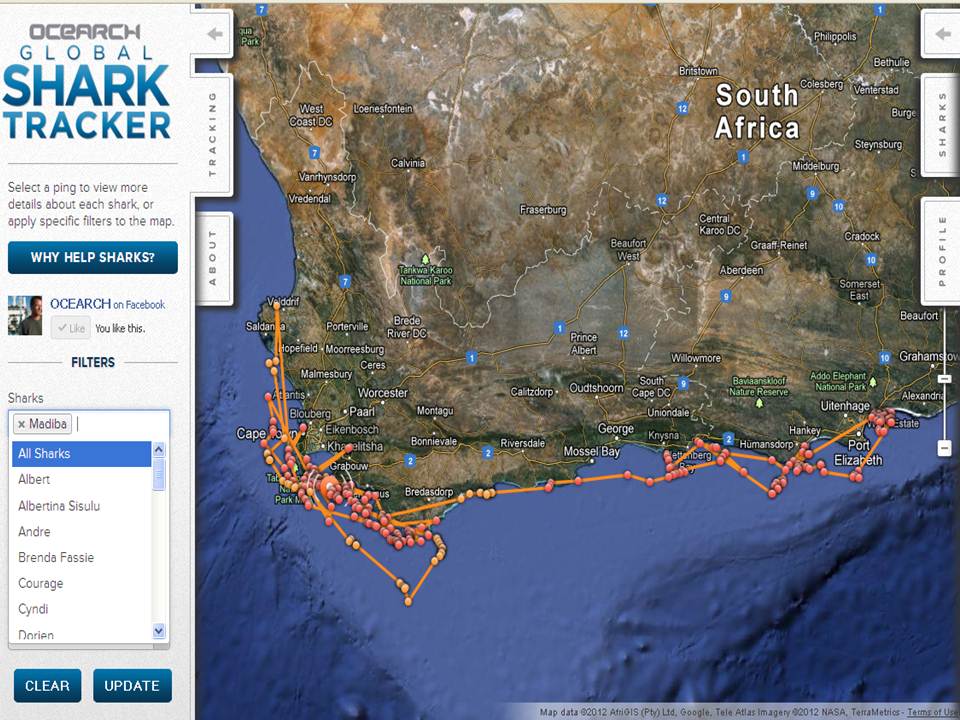