I am one month into my internship with the Bimini Sharklab, an internship that I have wanted to do since I was in high school. It has been nothing like I expected when I was 10 years younger, but nevertheless it has been an amazing experience. For starters, the island is a lot smaller than I expected and I have been enjoying the small island life. The sun is always shining, the palm trees wave with the wind, and the water is a special kind of blue, the “Bimini blue” color that I have been hearing about. However, I did not come to this lab to soak in the sun and play in the water, though that is what it feels like sometimes. It feels like that because I have wanted to work with sharks since I was five years old, and you know what they say about loving the work you do – it will never feel like work.

There has been one day that has really stood out to me so far, and it will be a day that I will definitely never forget. We were recently visited by course students from Eckerd College and in order to show them a little bit of what we do we set up scientific longlines to show them how they are set and how sharks are worked up from a longline. Yet, with everything that I have learned with my time as a fisheries technician, nothing ever goes as planned with fieldwork.

We were originally going to set up the longlines at a location east of the North island, but with rough seas we decided to set the lines within a channel that leads to a lagoon. Our crew’s morale was high while we were setting the lines, telling jokes and having a grand ole time. Our whimsical nature quickly switched to a more serious note when we realized that we had a blacktip (C. limbatus) shark on the line. There was no more time to joke around and we worked diligently to finish the workup in quick time. While we were working up the first shark there was another blacktip that ended up getting hooked on another line. Once we arrived at the second shark and did the workup, low and behold there was a third shark on the line. 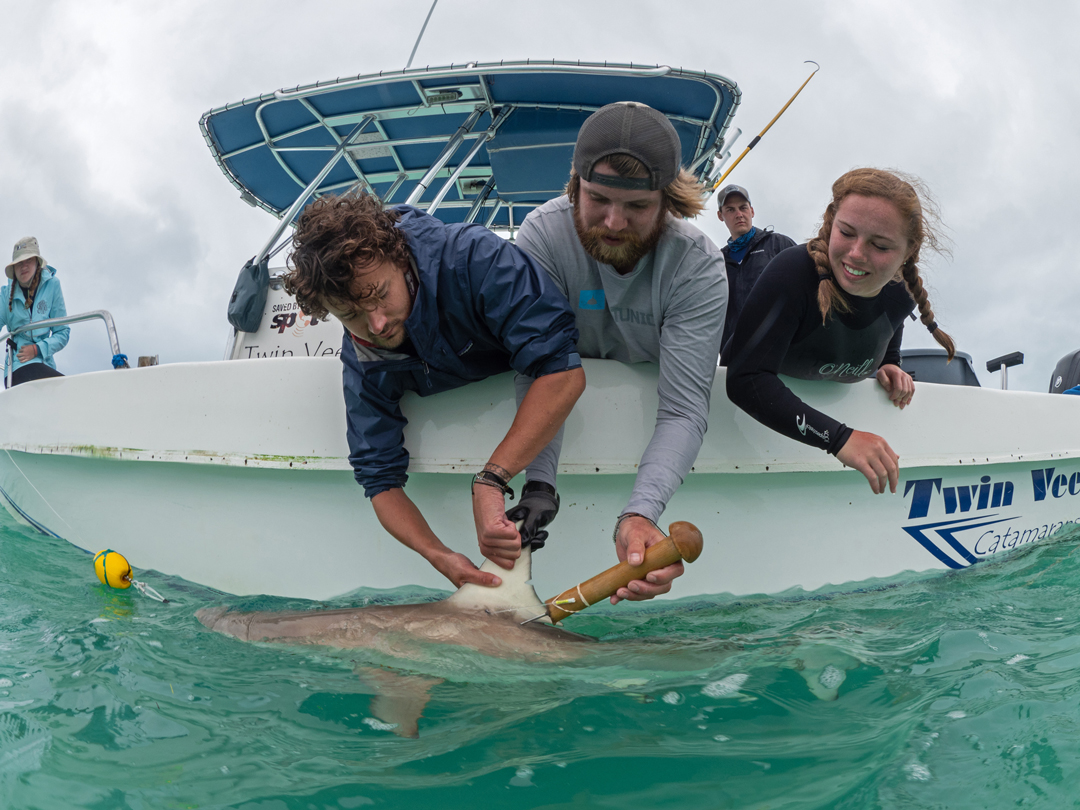 Little did we know, but this would be the start of seven back-to-back-to-back-to-back workups. There was no time between the sharks and we actually started to de-bait the lines so that the trend wouldn’t go on until nightfall.

Once everything was said and done, the mood of the team went from a serious note back to a lightened mood ending with an unbelievable high. In total we had four blacktip sharks and three lemon (N. brevirostris) sharks, and we never (at least since I’ve been here) have had that many sharks in such a short amount of time. All of the workups were done perfectly and quickly, with the students from Eckerd sharing the Sharklab teams’ excitement.