So, some new research is headed for False Bay’s fishes … and it means something pretty exciting for monitoring and conservation along the entire South African coastline. Before I give you some updates on our testing and preparation phase, perhaps I should explain a little what this is all about:

A leopard catshark gives the BRUV the curious once-over…

Cameras for Conservation:
Baited remote underwater video cameras (we like to call them BRUVS) were developed in Australia, and have subsequently been used from New Zealand to Hawaii, Belize and the Maldives (to mention but a few!) For South Africa, they represent a cost-effective, time-efficient method of monitoring our underwater world. In order to correctly protect and manage our fish stocks, we have to adequately monitor their populations. Monitoring also has to take place in our Marine Protected Areas (MPAs) to assess how they are working, inform future design and regulate their enforcement.

Our current repertoire of techniques used to monitor fish populations throw some logistical obstacles in the way of sustainable, long-term monitoring … SCUBA assessments are expensive, labour intensive and limited by the depths we can safely access, the amount of time that can safely be spent underwater and the ocean conditions suitable for dive surveys. Controlled angling surveys also rely on skilled labour, and may prove more difficult to justify in Marine Protected Areas (MPAs) and for species of particular conservation concern. In a country where the funds and skilled labour available for monitoring are limited, innovative solutions need to be added to our arsenal of conservation tools. 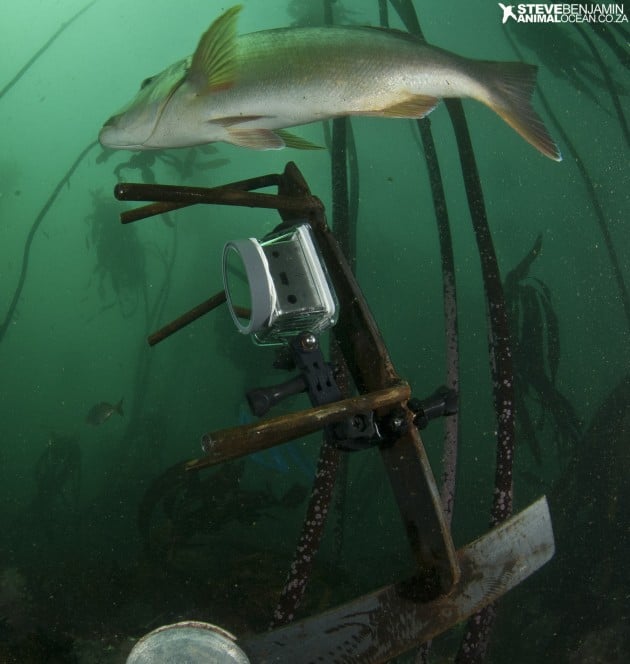 A red steenbras, species of great conservation concern, checks the BRUV out

An Underwater Eye:
BRUVs are deployed from a boat, lowered to the seafloor by means of a rope and remain connected to the surface by means of a buoy. They are left out for one hour to film all the fish that are attracted within the camera’s field of view. The footage is recorded on a memory disc and brought ashore for analysis later in the lab.

Why are we excited?
BRUVs have been shown to be more cost-effective than traditional monitoring techniques, with a lower environmental impact and modest requirements for skilled labour. Most excitingly, they have been shown to be important in assessing shark and ray species usually not detected by other monitoring techniques. This is really important for False Bay, where shyer shark species such as the Smooth-hound (Mustelus mustelus), Spotted gully (Triakis megalopterus) and the catshark species form an important part of the ecosystem (indeed, many shark and ray species form an important part of the fishery). BRUVs are useful for assessing reef fish species, which are particularly vulnerable to overfishing because they tend to be long-lived, slow-growing species and form a large component of South Africa’s recreational and commercial catch … So this year’s project will conduct the first underwater video assessment of False Bay’s fishes, including its shark and ray species. Bringing cameras to the conservation equation marks an important step in the future of monitoring along our coastline … Watch this space for updates from the field, lots of videos and some exciting findings!