Just another day at the shark lab

Our aim for this particular day was to catch lemon sharks larger than 1.2m for a visiting scientist, Evan Byrnes, who is using respirometry to study metabolic rate in sub-adult lemon sharks. 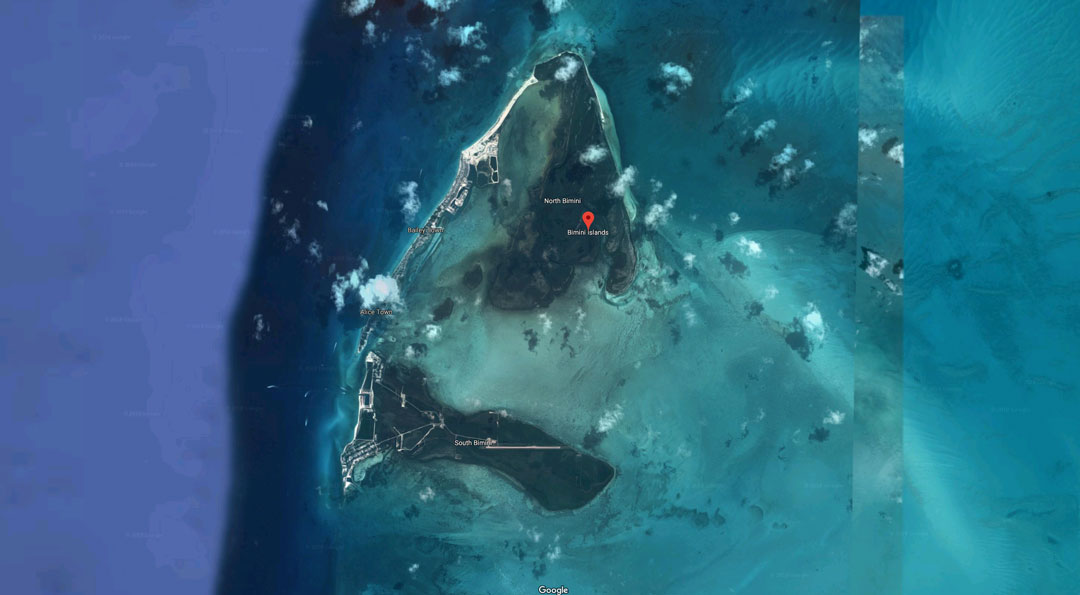 We started the day slowly baking in the sun but protected by the shore from the wind. We had interest immediately, in the form of juvenile lemons and a nurse shark, which was not what we were looking for. The tide slackened off and we decided to move 50 yards west to another outlet where our chum could flow further out to sea. With the sun reaching its peak ferocity and the wind whipping up we all started to lose hope and patience. Evan offered round his Skittles to his demoralised crew. Ryan, another volunteer, dropped one into the bottom of the boat, into a slurry of fish guts. Upset that he had let this tasty morsel go he gifted it to the shark gods and prayed for a lemon. Immediately after an overjoyed Ryan shouted out, pointing in the direction of a good-sized shadow. Within minutes, the little beauty was caught and pulled in to the edge of the boat, tail-roped and held in position by its dorsal fin. A quick measure to check his size and at 125cm, he was big enough for trials. We wrapped a DIY stretcher under the shark, lifting him up from the water to a transport tub on the boat. The hook was removed before a quick journey back to the Sharklab beach, where the reverse stretcher technique got him safely into our semi-captive pen. After a few mandatory high 5’s we returned to what we had now christened ‘Skittle Alley’.

We returned to find a second lemon shark hanging around our bait box. We set the lines and waited. Before long, number two was in the bag, just marginally bigger than the first at 127cm. It was getting late and we were ready to pull the lines when another volunteer noticed something swim underneath us. With the sun setting and the wind breaking the surface it made it difficult to work out. It was a shark but we were unsure of the species – it was big and odd. We soon realised that it was a lemon shark that had got something wrapped around it. 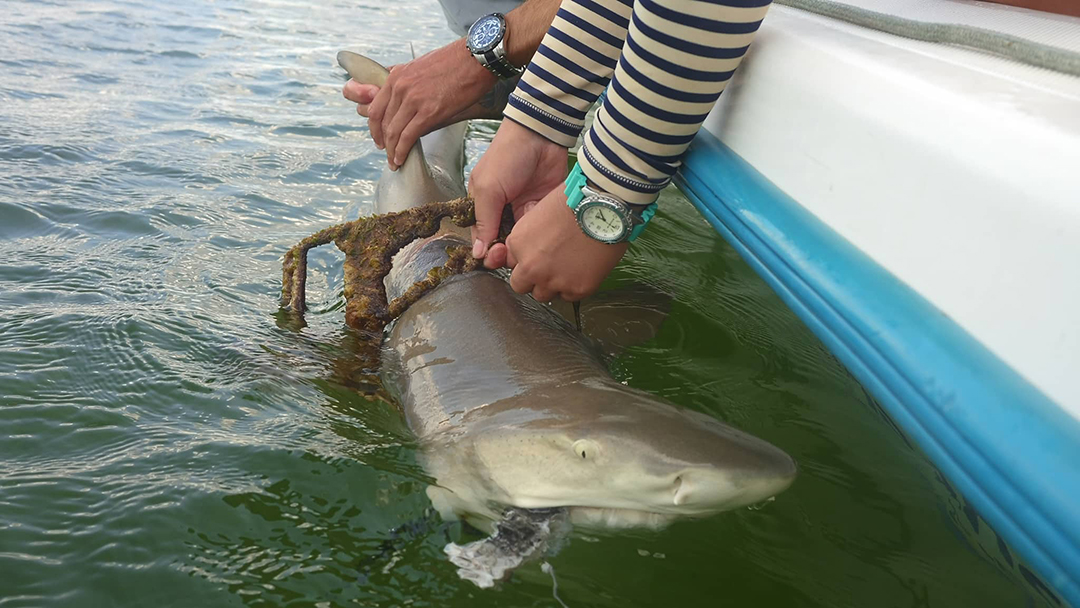 Time and time again he circled, dragging up sand as he swam. Finally he bit, and we got him to the surface only to reveal a metal gasket stuck around its body. The damage wasn’t immediately visible until we managed to cut the loop off. We gently peeled it away until we got to the pectoral fins, where we had to slide it out of the tissue – it had cut in like razor blades. Having trouble freeing the loop from the shark’s belly, we turned him into tonic immobility and were aghast at the sight of an inch-deep laceration around the entire body. 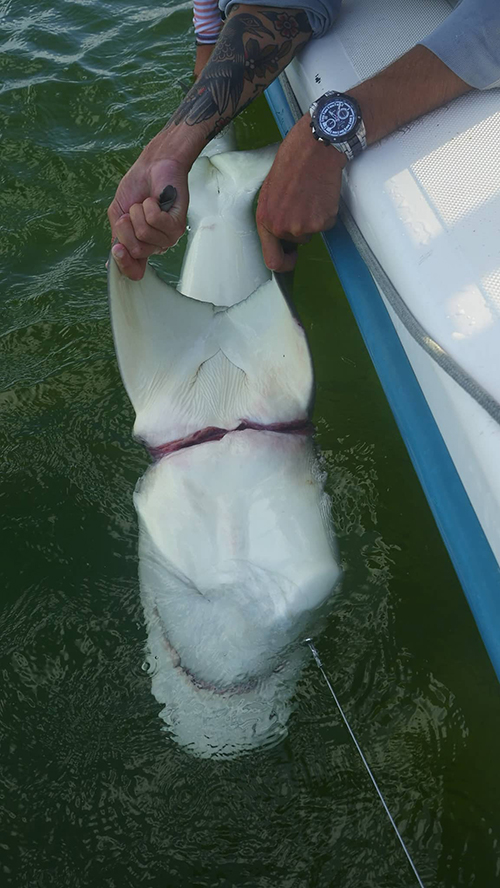 Laceration from the metal gasket on the belly of a lemon shark. Photo by Ryan Cake © Bimini Biological Field Station Foundation - SharkLab.

The metal gasket held in place from the skin that was healing over the top; obviously, this shark had worn this necklace for quite some time. Finally, he was free and with the hook removed, he swam away strong.

This shark was previously caught and tagged in April 2018, so it will be interesting to see his recovery if we capture him again. We returned for dinner and storytelling with a good feeling of having helped one of god’s creatures out!