How do sharks deal with hurricanes?

As shark scientists, The Bahamas is a goldmine. The crystal-clear waters and diversity of environments over and between the limestone banks that make up the country provide habitat for an abundance of sharks and rays. But in late summer, when the temperature of the warm, productive waters of the East Atlantic peaks, it also creates the perfect niche for something much more formidable: hurricanes. 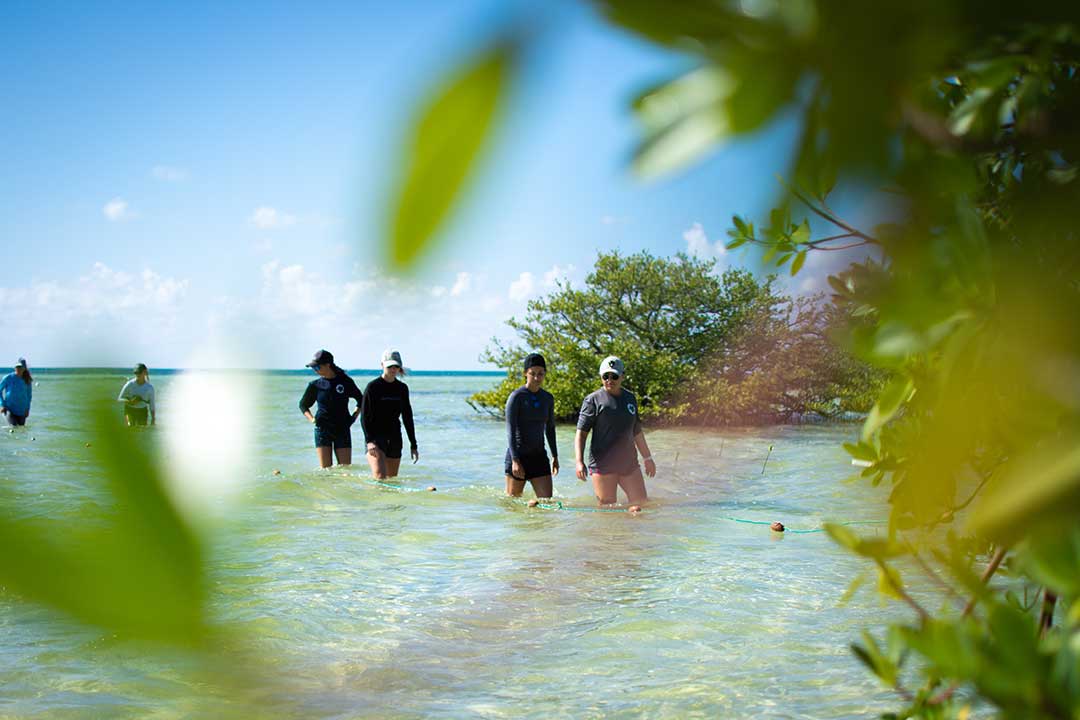 The 2020 Atlantic hurricane season was geared up to rival 2005 as one of the most active seasons on record. Sitting precariously in the path that many of these storms take, Bimini is no stranger to the monster storms that the Atlantic so readily whips up: through the lively 2005 season that saw Katrina cause desolation to New Orleans, Irma’s rampage through the Caribbean in 2017, and sitting just 50 miles south of Dorian’s eyewall last September: Bimini still stands. Sharklab staff and alumni are well-versed in how to execute a full evacuation of the lab, and the deep fear and hope that you feel as you look back at the boarded-up station, fingers firmly crossed for the days ahead.

And while the devastation caused by hurricanes is – understandably – measured in human-based metrics (lives lost, the monetary value of the damage caused, number of houses destroyed), we rarely consider the impact to the natural world, terrestrial or marine, despite the large repercussions of these extreme events.

So, what happens to the sharks in Bahamian waters during major hurricanes?

The answer is: it’s not entirely clear.

For starters, studying how sharks behave in response to hurricanes is challenging. To be in the same place as any major storm is not recommended, to say the least. But some studies have got around this by using acoustic telemetry: passive monitoring stations that detect if a tagged shark is in its locality.

In a recent study from Florida International University, Bradley Strickland and colleagues looked at the presence of juvenile bull sharks (Carcharhinus leucas) on their acoustic array in the Shark River Estuary as Hurricane Irma hit Florida in 2017. Of the 14 tagged animals, 11 regularly detected individuals were absent from the array across the days that Irma hit, leaving anywhere from 17 to 1 days before landfall. This not only suggests that sharks move out of coastal areas and presumably into deeper offshore waters but interestingly that they are able to anticipate the system sometime before it hits. 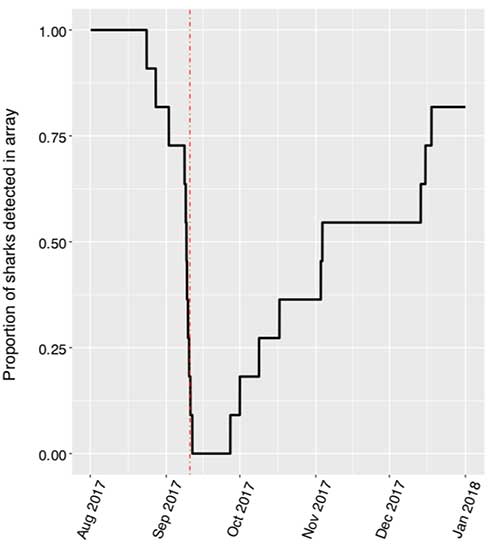 Figure from Strickland et al. (2019): Proportion of sharks detected on the array between August 2017 and January 2018. The red dotted line indicates the date that Hurricane Irma moved through the Shark River Estuary.

If you have ever experienced a hurricane, you’ll know that the strangely eerie days leading up to it seem surreal: as you hastily board your windows and tie-down your garden, the weather can still be beautifully calm. So what do sharks sense that we don’t? A study of blacktip sharks (Carcharhinus limbatus) published in 2001 by a team at Mote Marine Laboratory used the same passive telemetry as Strickland et al. alongside measuring other meteorological parameters. They similarly discovered that the sharks left their shallow water habitat and moved to deeper water, but what’s more, their initial departure was matched to the sudden drop in barometric pressure that proceeds a storm – in this instance, tropical storm Gabrielle. This behaviour was repeated the next year when Hurricane Gordon passed through the same study site 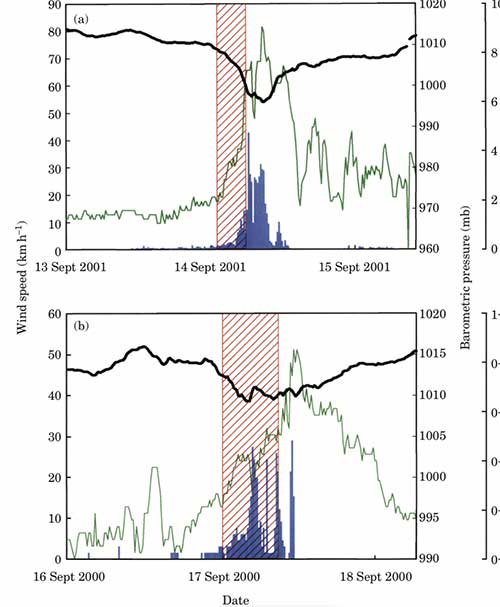 Figure from Heupel et al. (2003): Weather conditions and timing of shark departure from the array during two Atlantic storm events.

In both of these studies, sharks returned to their usual habitat once the storm has passed, albeit for a few that seemingly succumbed to the drastic marine conditions associated with storms; reduced dissolved oxygen and drops in temperature accompany the expected violent waves and surge. While there is still much more to learn, what we do know paints a fascinating picture of a resilient group of fish. 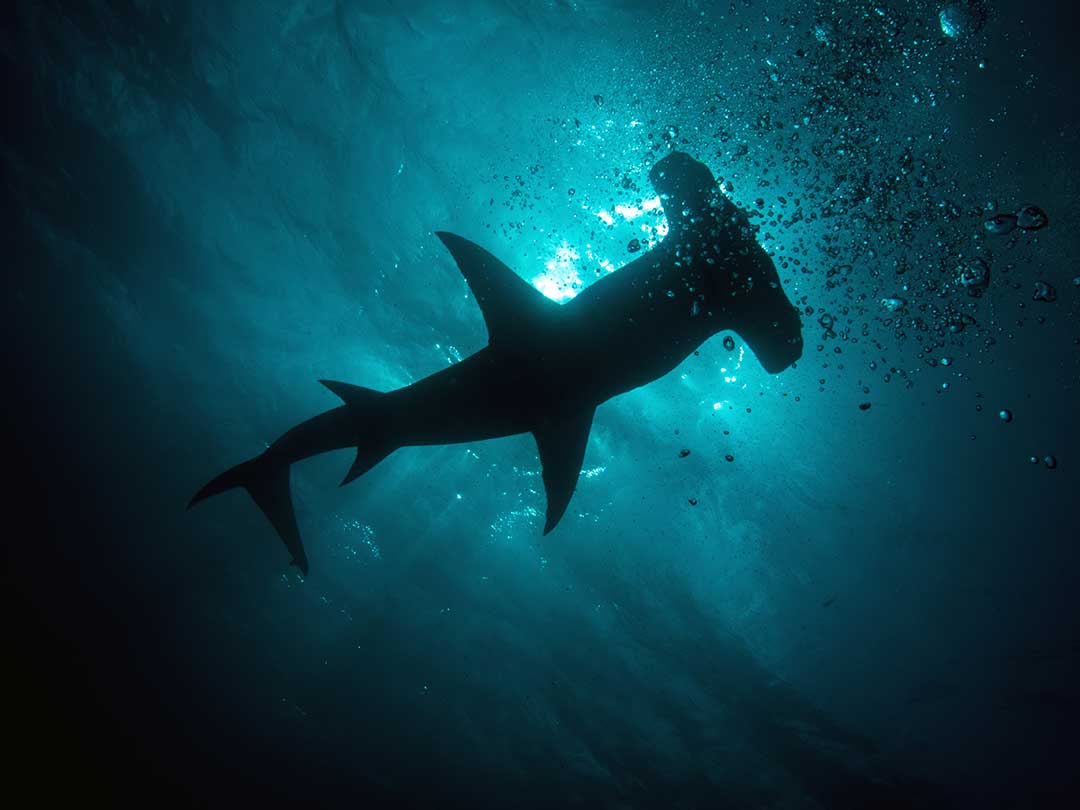 Many people in The Bahamas are living with the impacts of Dorian today. Information on relief efforts can still be accessed here

If you’d like to hear more about how Hurricane Dorian affected the marine habitats of Grand Bahama and Andros, the 2020 Bahamas National Trust online conference session can be found here.