An element of surprise …

There is some quality about my job that I find quite difficult to explain, and it has to do with the answer I give to the question that I am most commonly asked about this work.

It has to do with boredom.

For most, the initial idea of sifting through hours of underwater video footage in a dry, scientifically “objective” manner sounds truly torturous. So, it becomes quite hard to redress this idea and explain that Lucky-Packet feeling of suspense that is the trademark of my video analysis …

It’s really about a sense of wonder. Bringing videos up from the seafloor, knowing that we were circling just above that secret underwater world for the hour that camera was filming, brings me a thrilling sense of satisfaction. Of course, any diver will tell you that actually being down there diving is better – and I’d have to agree! However, I am a patient sort …

While we were pacing around on the boat, there was no trace of a fin cutting the water’s surface. No fleeting shadow alongside our boat. No hint that one of the ocean’s most magnificent top predators was cruising coolly just within our vicinity.

Except, of course, for the evidence logged for posterity on video … and this video evidence is exactly what this blog post is about. 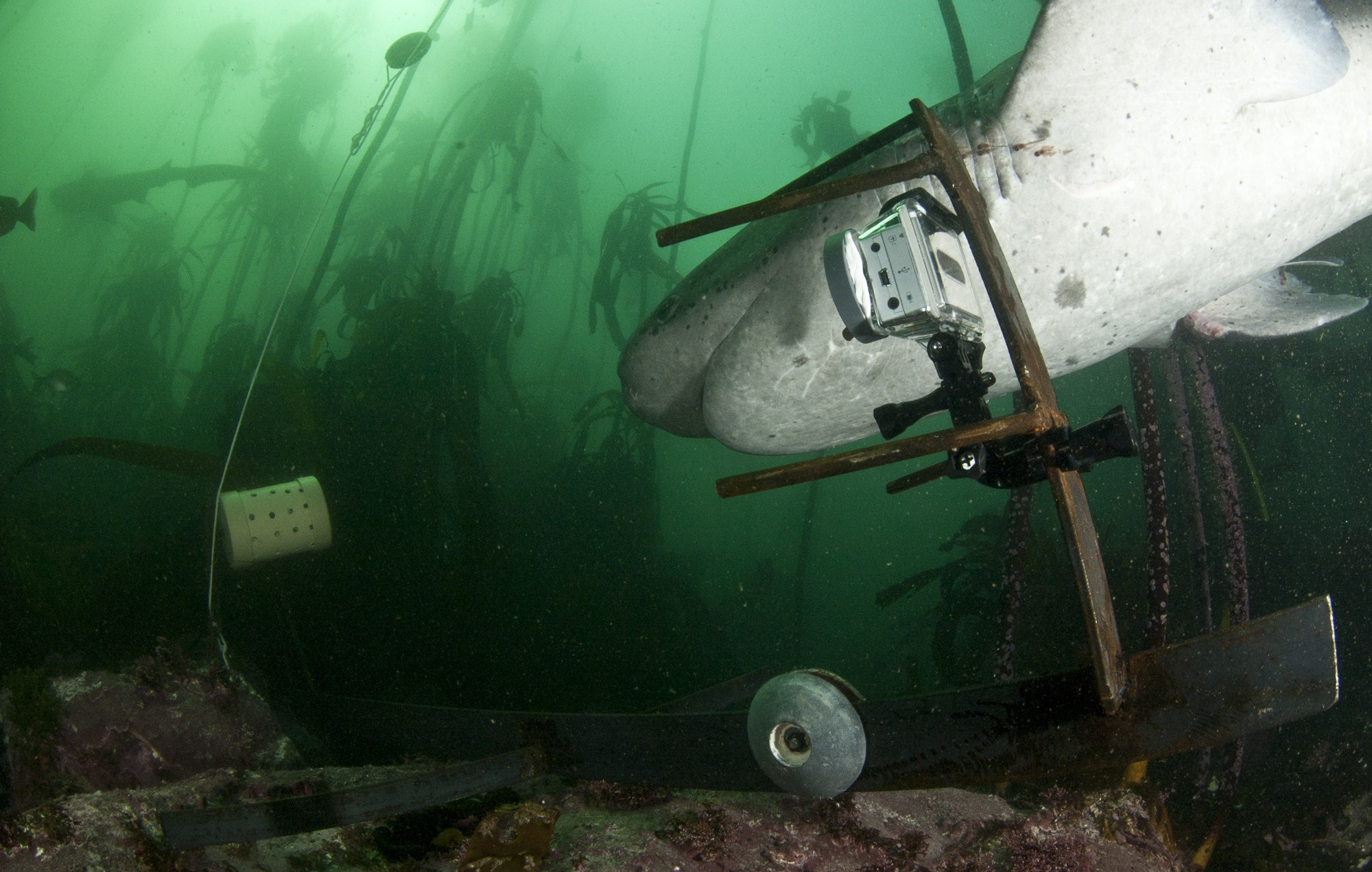 Recording sharks on our cameras is exciting for reasons that go much beyond my own entertainment. Current discussions in scientific literature rage around the conservation of the ocean’s top predators, globally. Their populations depressed by overfishing and habitat destruction, the conservation status of chondricthyans (cartilaginous fishes), whose pivotal role in our oceans structures entire ecosystems, is seriously threatened.

False Bay has been fished commercially since the 1600s, and chondrichthyans form part of commercial catches in various fisheries throughout the Bay to this current day. However, the adequate assessment of the conservation status of sharks, rays and skates impacted by the fisheries in False Bay is hindered by the logistics and costs involved in obtaining sound, long-term records.

As an interesting aside, research shows that several chondrichthyans tend to be shy around SCUBA divers – deterred by their air bubbles, we assume, and therefore often go unrecorded in SCUBA surveys. Others may not be detected in controlled angling surveys and therefore tend to be underrepresented in fishing records. This makes monitoring of sharks, rays and skates particularly tricky …

Without understanding of the current diversity and abundance of these cartilaginous fishes in our waters, their adequate protection cannot be ensured. False Bay, according to a recent study by my colleague Nikki Best at the University of Cape Town, hosts 38 species of sharks, rays and skates. Phenomenal. Nikki raises the important point of just how tricky the proper assessment of chondrichthyans is, highlighting several problems:

1.Whilst they are commonly caught, sharks are often inadequately chronicled in fishery records (especially if they are not recorded to species level, or not recorded at all and disregarded as bycatch)
2.Our understanding of the biology of many shark species remains poor, hindering the proper modeling of shark population dynamics
3.A historical baseline of unexploited shark populations very rarely (if ever) exists, which complicates analyzing population trends over time

Active commercial and recreational fisheries in False Bay are important economically and, as Nikki notes in her work, their impact on sharks, rays and skates cannot be entirely mitigated. However, proper monitoring of their populations that contributes to increased understanding of their diversity, abundance and biology, is a step towards effective management and protection of these species.

The advent of underwater cameras marks what I truly hope is a turning point for sustainable marine monitoring, by offering a non-extractive means of recording the diversity and relative abundance of species across our Bay, over time.

If these sharks’ interest in the bait canister is anything to go by, it seems we may have another monitoring tool to add to our conservation arsenal.