Fine-tuning the movement patterns of the giant guitarfish

Due to the charismatic nature of many large shark species such as great whites, tigers, bulls and whale sharks, they have received much attention over the years, and for this reason are relatively well studied. Unfortunately, this trend has left many lower priority species of sharks, skates and rays relatively understudied. In some circumstances, as was the case with the sawfishes, they are the species that are at the highest risk of extinction and require urgent management attention.

Guitarfishes, also known as sandsharks or wedgefishes, share a body form somewhere between a musical instrument and a shark, are a unique family of rays comprising of 55 species found in most oceans. Unfortunately, they have been identified as being one of the most vulnerable families of cartilaginous fish in the world. This is primarily due to their highly prized fins which are used in the Asian shark-fin soup trade. Despite guitarfishes being of significant importance to this and other fisheries around the world, there is a paucity of information on their movement behaviour, reproductive biology, nursery areas, breeding areas, age and growth. 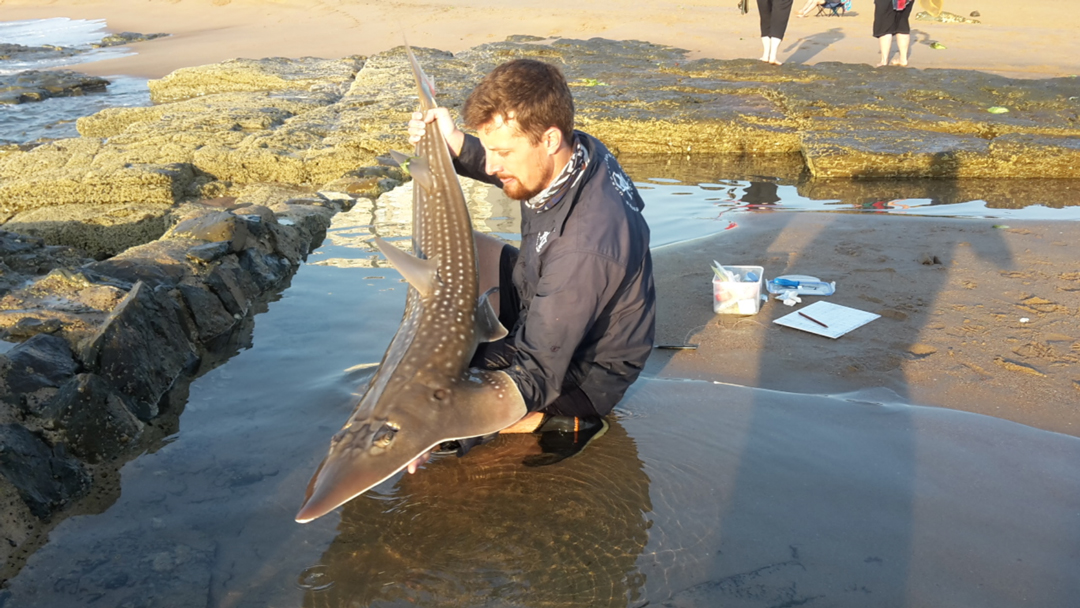 A few years ago the Oceanographic Research Institute (ORI) identified the need for further research on these species and in 2016, in collaboration with the Acoustic Tracking Array Platform (ATAP), Save our Seas Foundation (SOSF) and the KwaZulu-Natal Sharks Board (KZNSB), they started a project tracking the movements of giant guitarfish (Rhynchobatus djiddensis) along the east coast of South Africa using acoustic tags/transmitters. Each tag, which is inserted into the abdominal cavity of the fish, emits a unique signal with a date and time stamp that is detected by receivers that are moored to the seafloor at various localities along the coast. Unlike conventional mark-recapture studies, the use of acoustic telemetry allows scientists to collect continuous data on the spatial and temporal movement of fish, which is vital for successful conservation and management of a species. 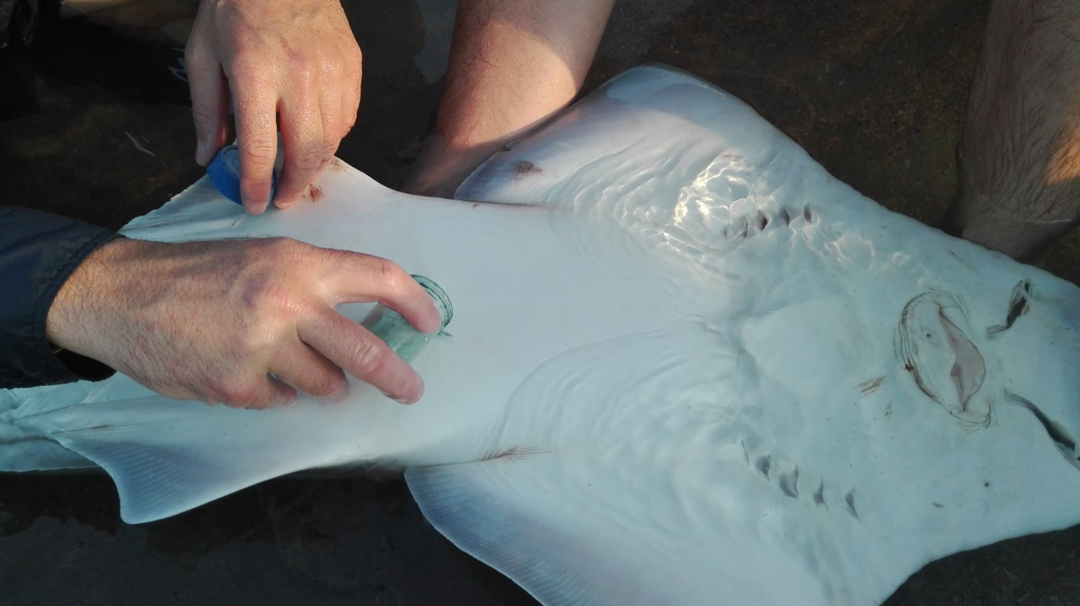 Applying antiseptic gel to the tag site while the giant guitarfish recovers in a rock pool. Photo © Jade Maggs

To date the project has been very successful with the tag and release of 19 giant guitarfish including seven males and eight females, ranging in length from 1220 mm Total Length (TL) to 2770 mm TL. Of the 19 individuals tagged, nine have been detected at various receivers stationed along the KwaZulu-Natal and southern Mozambique coast. Six of these individuals have shown fairly localised movement (< 50 km) to date and have remained within the general vicinity of where they were originally tagged. However, the other three individuals showed substantial movements covering 100s of kilometres. Interestingly, the smaller individuals (1370-1950 mm TL) including three males and three females showed limited movement, while the larger individuals (1690-2770 mm TL), including one male and two females, showed greater movements. There was some evidence of seasonality with the larger individuals tending to move north in winter and south in summer. The largest female tagged (2770 mm TL), was detected just over 16 hours after of the tagging event and four days later she had moved approximately 100 km in a north-easterly direction and was detected off Ponto do Ouro in southern Mozambique. Such a find is concerning as guitarfishes are heavily exploited in Mozambique for their fins. Longshore movement of adults into Mozambique could therefore explain why the population numbers of this species have decreased in South African waters. 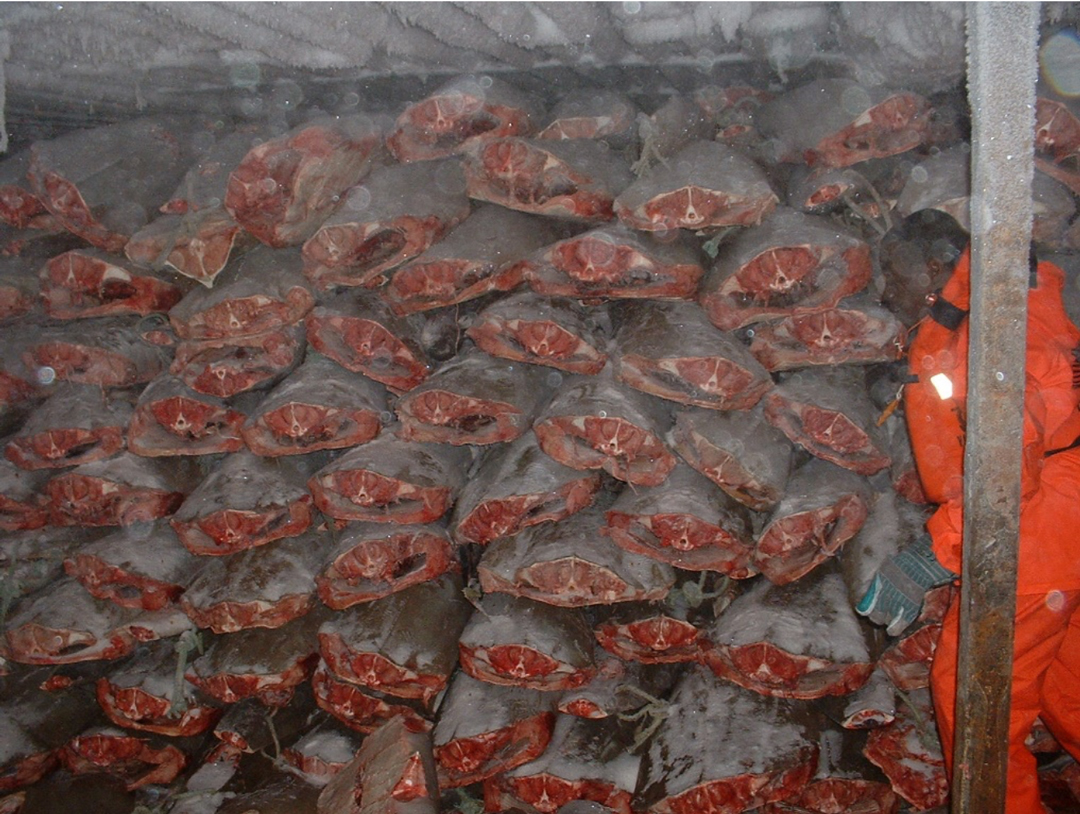 A second large female (2060 mm TL) moved approximately 250 km from the original tagging site at Nonoti to Sodwana Bay between March and July 2017. She remained in the iSimangaliso Wetland Park for three months before returning to Tinley Manor in November 2017. She stayed in this area until the end of March 2018 and then again moved back to the Park and was recorded off Leven Point in July 2018. During her second visit to the park she was recorded on receivers placed in the deepwater canyons off Leven Point and Leadsman Shoal indicating that she undertook forays into deeper water.

Only one male has shown extensive movement up and down the coast between Ifafa and Richards Bay, sometimes at a considerable speed. In two and a half years this male has moved over 650 km, with an average speed of 1.3 km per day.

Given the susceptibility of this species to capture by multiple gear types, the known heavy fishing pressure from local and foreign vessels in parts of its range (Tanzania, Kenya and Mozambique) and the limited information on its life history, it is paramount that further research is conducted on this vulnerable species. By passively tracking various individuals from the population using acoustic tags it is hoped that the movement behaviour of the giant guitarfish will become better understood, and that the data will be used to implement/identify suitable management strategies going forward. This is particularly important if individuals are indeed migrating to Mozambican waters, in which case transboundary management strategies will need to be considered.