Filming in the heart of the Sulu Sea

Our home - M/Y Navorca moored near one of the atolls in TRNP. Photo © Tommy Schultz | LAMAVE
By Sally Snow, 8th November 2022

Nestled in the heart of the Coral Triangle – the global centre of marine biodiversity – lies Tubbataha Reefs Natural Park, an underwater jewel. Located ~150km from the island of Palawan in the Philippines, it is also the most remote site of all the filming locations.

Its remoteness is both a blessing and a challenge. A blessing because being located so far offshore, it is harder to exploit the park’s natural resources; a challenge because documenting the role of the park rangers and the collaborative research on sharks meant travelling overnight by liveaboard. 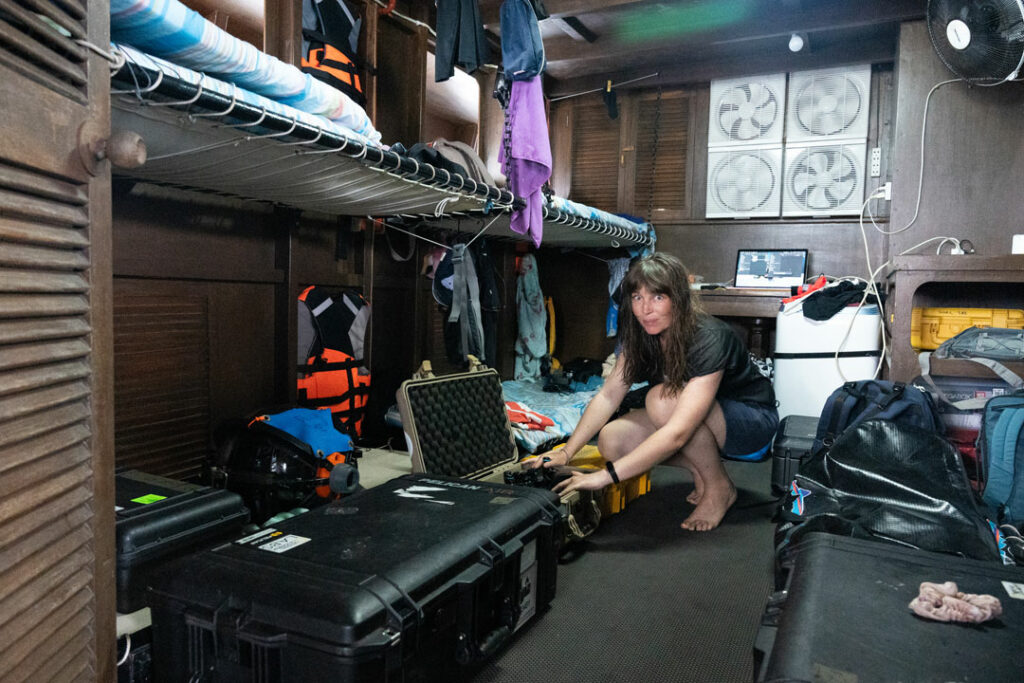 Me, onboard M/Y Navorca in our sleeping quarters. As you can see gear takes priority over people!

The park is a strictly no-take zone, and the commitment of the rangers and the Tubbataha Management Office (TMO) has ensured these waters are some of the richest in the Philippines. As a result, it has become a haven for sharks. Clouds of juvenile grey reef sharks shimmer on the reefs, while white tip reef sharks cruise by with giant trevally, looking for their next unsuspecting meal. Tiger sharks, the crown jewel of the park, are more elusive. The focus of the research team from LAMAVE, TMO and WWF-Philippines is understanding how sharks use the protected area, and they are whom I am here to film. 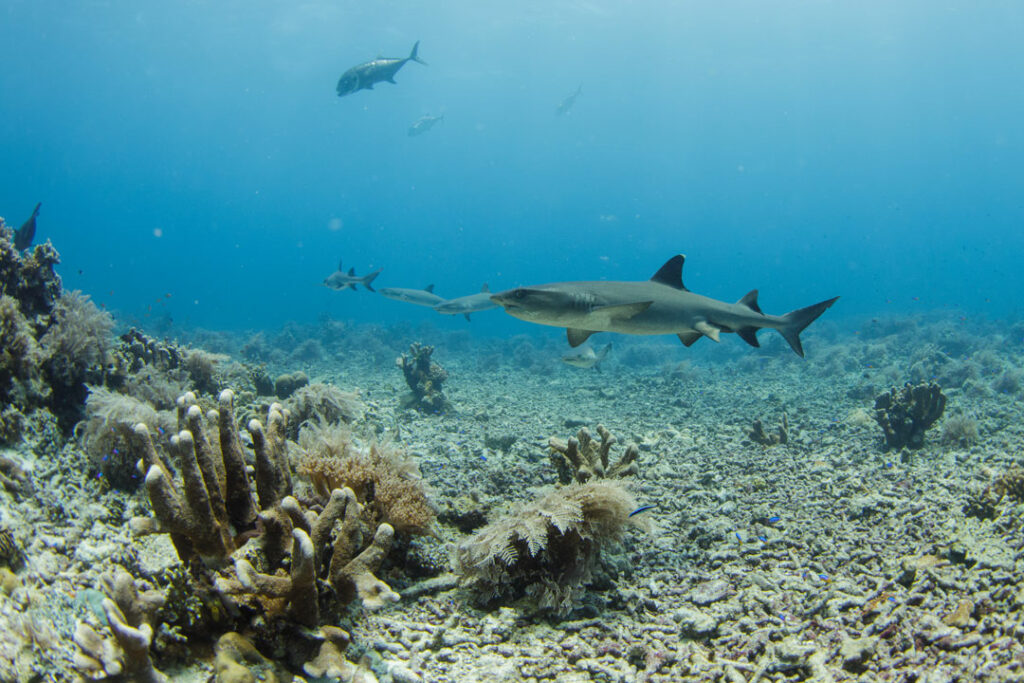 Navigating restrictions to curb the spread of covid-19

Usually, the team’s first activity is to visit the rangers who live on a stilted station and monitor the park 24 hours a day, seven days a week. However, this year, to ensure the safety of the rangers, the research team has to take additional safety measures, including testing for covid-19 once already in the park, meaning the first few days, we remained isolated from each other. 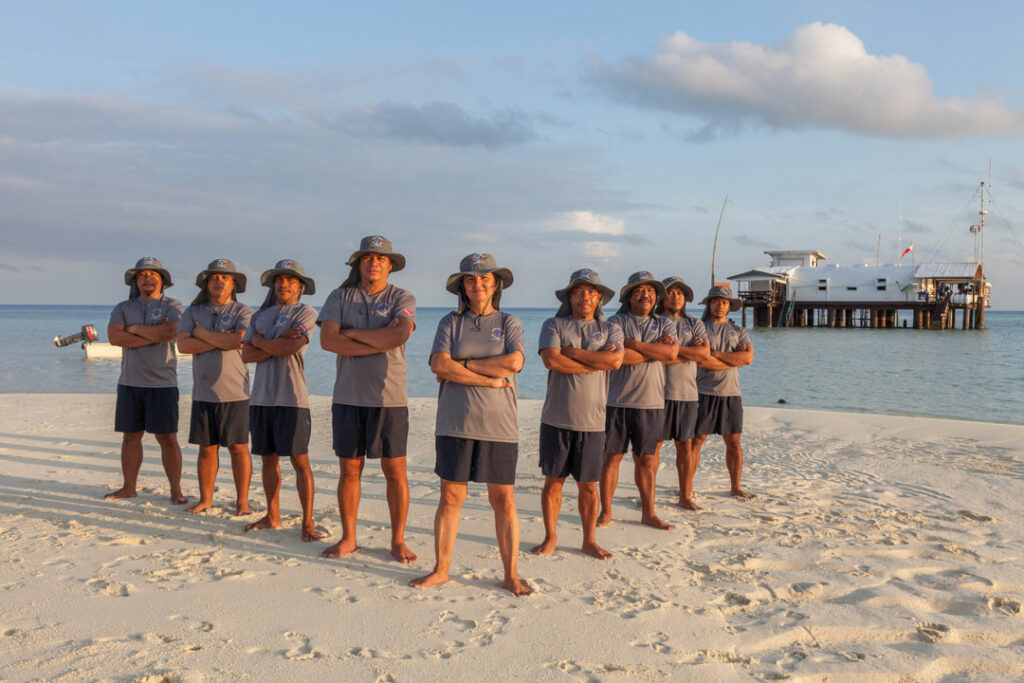 Fortunately, with negative tests all around, we were reunited with the rangers, so the work could really begin. The Philippines endured one of the longest lockdowns in the world (imposed by the need to curb the transmission of covid-19), and so for the LAMAVE team, this was the first expedition to the park since 2019. Consequently, the expedition timetable was jam-packed with research activities – from deep sea exploration to shark tagging.

One of the priorities was to replace the array of acoustic receivers in the park. The array is a series of underwater listening devices positioned around the park and allows the team to study the movement and habitat use of tiger and grey reef sharks. Tagged sharks transmit a unique “ping” to an acoustic receiver each time they swim within ~500 meters of the receiver. Over time these pings create a map of how the species are using the park.

Each receiver – which is around the size of a 1.5-litre bottle is positioned around 25 meters underwater and so replacing them requires scuba diving. Using GPS positioning, the team positioned themselves over the area where they first deployed the receiver. As Kuya Jun keeps the boat in position, the team checks the current’s direction. Jump in without checking the current, and they could be swept in the opposite direction that they need to go. 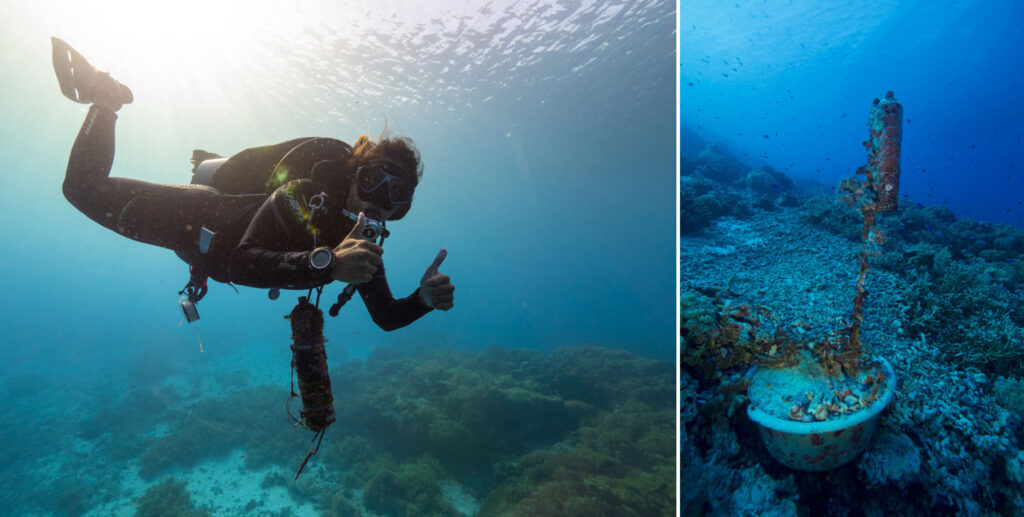 Once in, the team dive to depths of around 20 meters, scanning the coral wall for signs of the receiver. Sometimes when the conditions are right, they see it immediately. Other times the receiver can be camouflaged with marine animals such as hydroids. Once located, it’s a quick change to remove the current receiver and replace it with a new one with fresh batteries. Once done, if air and time allow, they may enjoy the rest of the dive. Other times it’s a quick ascent to the surface after a safety stop.

In addition to replacing all the receivers in the park, one of the goals of this year’s expedition was to explore the depths of TRNP. With access to a new type of technology, the team were able to explore different habitats and gain a new perspective on species within the park – but for that, you will have to wait for the final film!

The expedition was a success, both from a research and filming standpoint. A key theme that will be highlighted in the final film is collaboration – as research and conservation in such remote areas would not be possible without working together. For me, this will always be one of the pillars of success.