One of the Bimini Sharklab’s main missions is to aid in ‘raising public perception and awareness of sharks and other marine species.’ Since our inception in 1990, the Sharklab has recognized the need to help educate and engage the public on not only current elasmobranch research but also on conservation issues that are affecting marine ecosystems both locally and globally. According to this year’s statistics released by the Bahamian Ministry of Tourism 5,920,191 tourists visited the Bahamian Islands between January to October of this year. With more and more tourists visiting the Bahamas for vacations, fishing breaks, and shark diving, it has become apparent that the lab needs to utilize many different platforms to engage the public on the important role sharks have within an ecosystem. 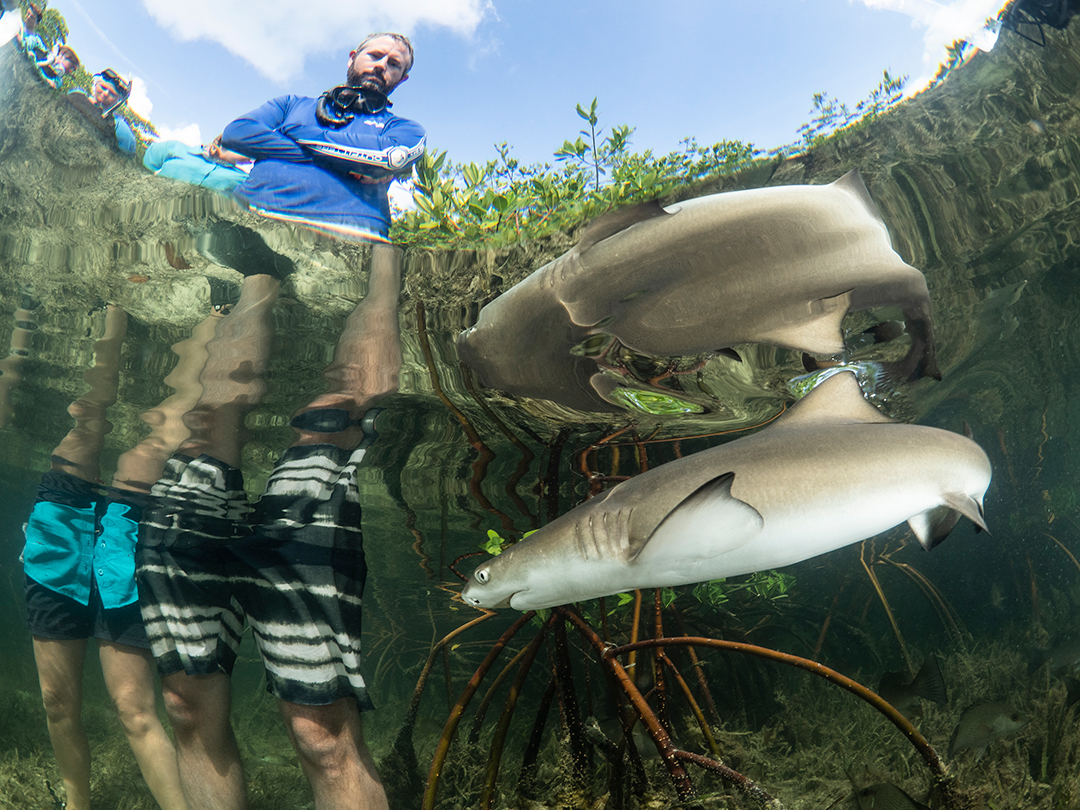 The Sharklab has always welcomed visitors who wish to learn more about the research being conducted at the station through public tours. Often, these visitors have never seen a shark before, and due to the fearmongering and negative media that surrounds sharks, most of these guests are naturally apprehensive of sharks. Thus, not surprisingly I tend to get asked the same questions; are sharks dangerous? What’s the most aggressive shark? Will a shark attack me if I am in the water? Are sharks attracted to human blood?

I never mind when these questions get asked since it provides me with the opportunity to dispel some of the myths surrounding sharks. When a guest asks me ‘if sharks are dangerous’, this allows me to open up a dialogue and explain life-history traits about some of these species of shark such as their foraging behaviours and relate that back to why some species of shark can be considered more exploratory or curious than other species.

I always try to dissuade the use of the word ‘dangerous’ when talking to the public about sharks. The word has such a negative connotation and these tours aim to show sharks in a positive light. To do this, we have a semi-captive pen behind the station where we keep a juvenile lemon and nurse sharks for a short time before releasing them back to the wild. During these tours, guests get to interact with and learn about the physiology and life-history traits of these two species whilst observing a positive interaction with sharks. Often the opportunity to see these juvenile sharks’ teeth, skin and eyes up close show guests that they aren’t ‘scary’ monsters but incredibly well-adapted fish that play a vital role in maintaining a healthy ecosystem.

Sometimes you can even see guests’ attitudes change towards sharks as the tour progresses and by the end of the tour instead of asking questions about which shark is the most dangerous, they might ask about reproduction in sharks and what the mortality rate is in juvenile lemon sharks. A vast and welcomed change in attitude.