EDUCATING ANGLERS TO SAVE SHARKS

A survey conducted in 2007 estimated that recreational shore fishing in South Africa (SA) contributes approximately R2.5 billion annually to the economy (SADSAA 2007). This figure is an ballpark figure of ALL shore angling activity but the contribution of the elasmobranch targeted recreational angling is yet to be determined. There are ± 850 000 shore anglers in SA, of which approximately 3500 are club or formalized anglers who fish primarily for sport. This group of anglers’ fish avidly and mostly practice catch and release fishing for sharks, skates and rays during competitions and to gain skill in their sport. RecFishSA recognizes that these anglers have the skill, passion and knowledge to contribute toward better understanding of the species they target. The anglers have expressed their concern regarding declines in catch per unit effort and the maximum sizes of the sharks, skates and rays they catch. It is with this in mind that RecFishSA have developed and implemented the Responsible Angling Clinic (RAC) with the aim of educating anglers about ethical catch and release fishing and how to contribute to science and conservation through the Ocean Research Institute (ORI) collaborative tagging program ().

On September 6th (2012) the South African Shark Conservancy’s RecFishSA program delivered the first Responsible Angling Clinic in Goodwood, Cape Town. Although the RAC has been developed for club anglers in the area, the invitation to attend was extended to any recreational angler. The Clinic was well attended and feedback from the anglers was positive.

The Clinic began with a PowerPoint presentation which highlighted the following information:
• The aims and objectives of the SASC RecFishSA project;
• The history of the ORI tagging program;
• What can be learned from tagging and releasing elasmobranchs;
• The possible problems which can arise from a collaborative tagging program and how to best avoid these issues;
• Elasmobranch evolution;
• Biology: The differences between elasmobranchs and bony fish, elasmobranch senses;
• Ecology: The importance of apex predators and the consequences of their removal from marine ecosystems;
• Post-release mortality: Published findings, reasons for mortality, best tackle choices, handling practices and how to increase caught and released elasmobranchs’ chances of survival (see best tackle box choices picture below)
• Tagging elasmobranchs: How to collect meaningful biological data;
• Confusing elasmobranch species: How to identify and differentiate between confusing species often caught by shore anglers
• How to handle re-captured tagged elasmobranchs;
• How to apply for an ORI tag kit 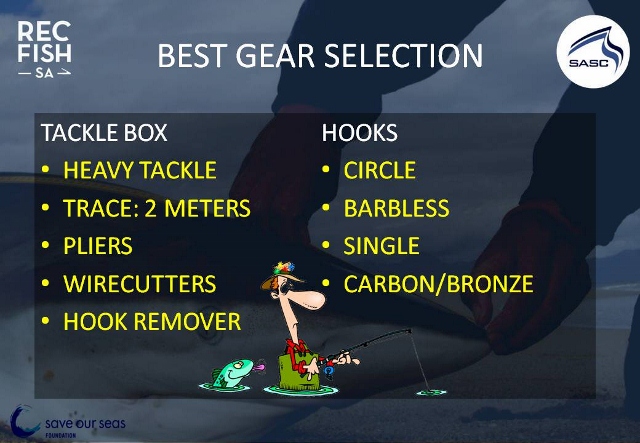 The presentation was followed by a tagging demonstration and dissection on a commercially caught shark donated by a local long-line fishing vessel.
To ensure that anglers are committed to the program, ORI and RecFishSA require that the anglers order their own tagging kits directly from ORI at a cost of R300.00. The contents of the ORI kit includes: spaghetti tags, a tag applicator, a measure tape and tagging data sheets. Refill tags are replaced by ORI free of charge as long as the angler has submitted previous tag data. Once registered, each ORI registered angler receives an online profile where they are able to check up on their tag report and re-capture details. Upon order, the ORI tag kits take approximately two weeks to arrive via postal service.

A practical catch, tag and release beach day is scheduled for the 20th October. RAC anglers who are eager to contribute to the tagging program will receive further guidance from RecFishSA with regard to tagging and data collection. 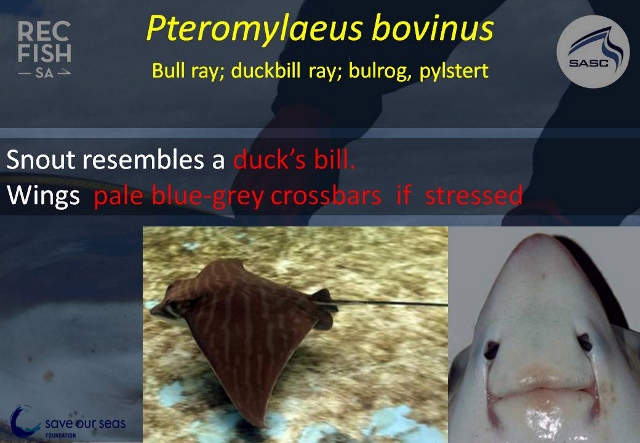 The first RAC was an amazing experience – both anglers and the RecFishSA team learned a great deal – special thanks to all the anglers who attended and especially to Zane Merton (Western Cape Shore Angling Association Environmental Officer). We are looking forward to a great field season on the beach with a great team of Responsible Anglers!