It seems like everywhere you look nowadays there is a new gadget or gizmo on the market “guaranteed” to keep you safe from shark bites. Using everything from electric currents to chilli powder, clever marketing has got nervous ocean lovers reaching for their wallets and spending stacks of cash on products with very little evidence to back up their claims that they can effectively reduce the risk of encountering a shark. South African agent provocateur Conn Bertish even parodied the public’s appetite for shark repellents with his Surf Bro idea – writing “tastes bad”, “do not swallow” and “100% broccoli” on the bottom of his surfboard and claiming a 100% success rate at not getting bitten! 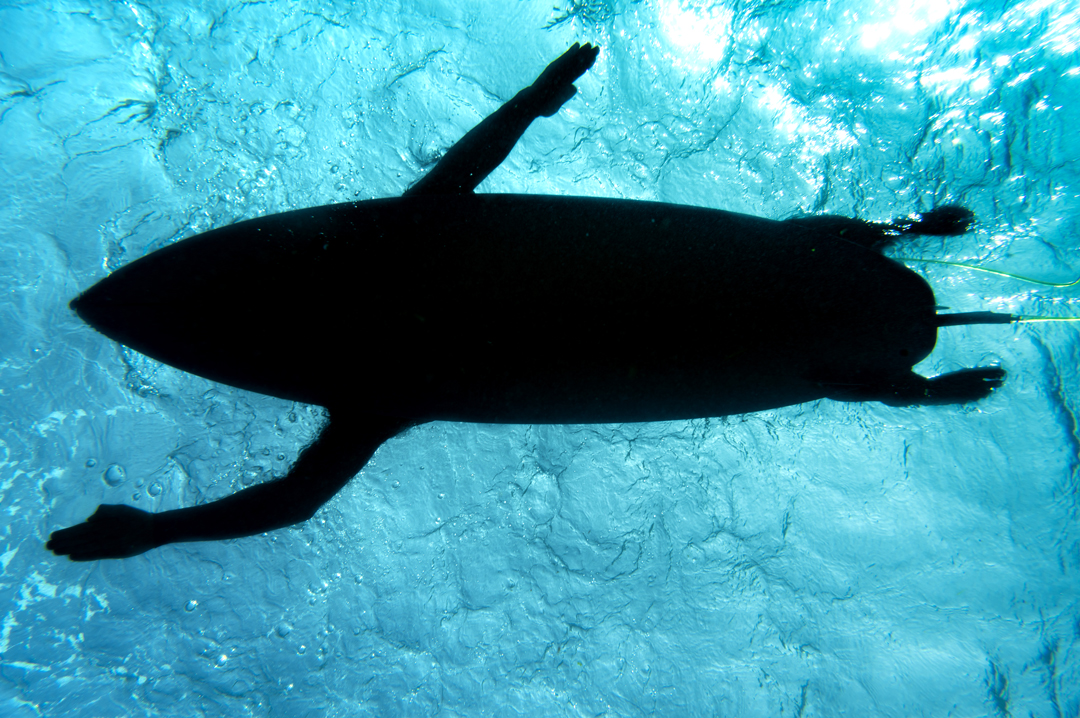 So the question is, how can we be sure that any of these personal shark deterrents really work before investing in something with the same effectiveness as painting broccoli on the underside of your board? Thankfully the answer comes in the form of rigorous peer reviewed scientific testing, and teams of scientists around the world are now investing time and money in assessing the effectiveness of these personal shark deterrents in order to dispel some of the myths and provide transparency to the consumer market around what does and doesn’t work when it comes to reducing the risk of shark attack.

A newly published study by Save Our Seas Foundation Project Leader Dr Charlie Huveneers and colleagues at Flinders University, Australia, compared the effectiveness of five of the most popular personal shark deterrents commercially available for surfers including the Ocean Guardian (previously known as Shark Shield) Freedom+ Surf, Rpela, SharkBanz bracelet, SharkBanz (Modom) surf leash and Chillax wax. These repellents use a range of different methods to deter sharks including electrical current, magnetic fields and olfactory stimulants, as described in the table below, and were tested on great white sharks (Carcharodon Carcharias) at the Neptune Islands, South Australia. 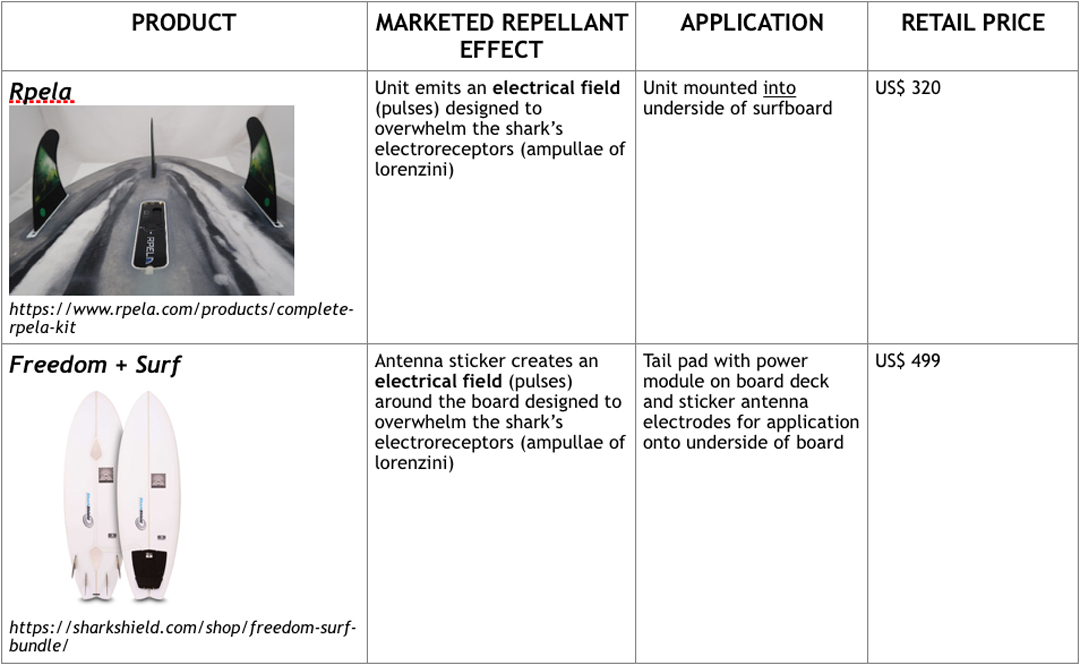 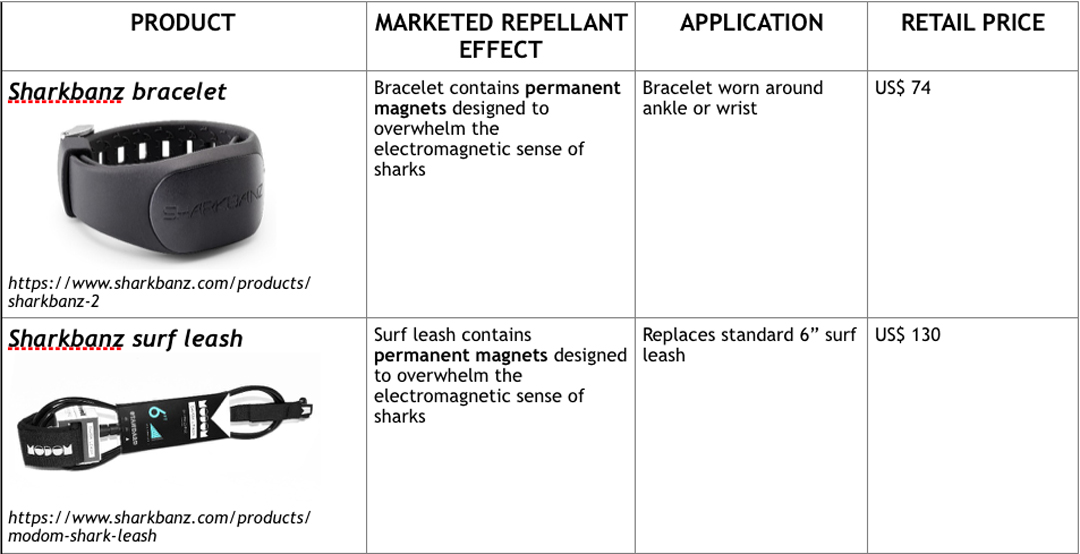 Using custom built surfboard replicas with the deterrents and bait attached, the team of scientists conducted 297 trials to compare changes in shark behaviour when each deterrent was active, including the percentage of baits taken, distance to the bait, number of passes, and whether a shark reaction could be observed. 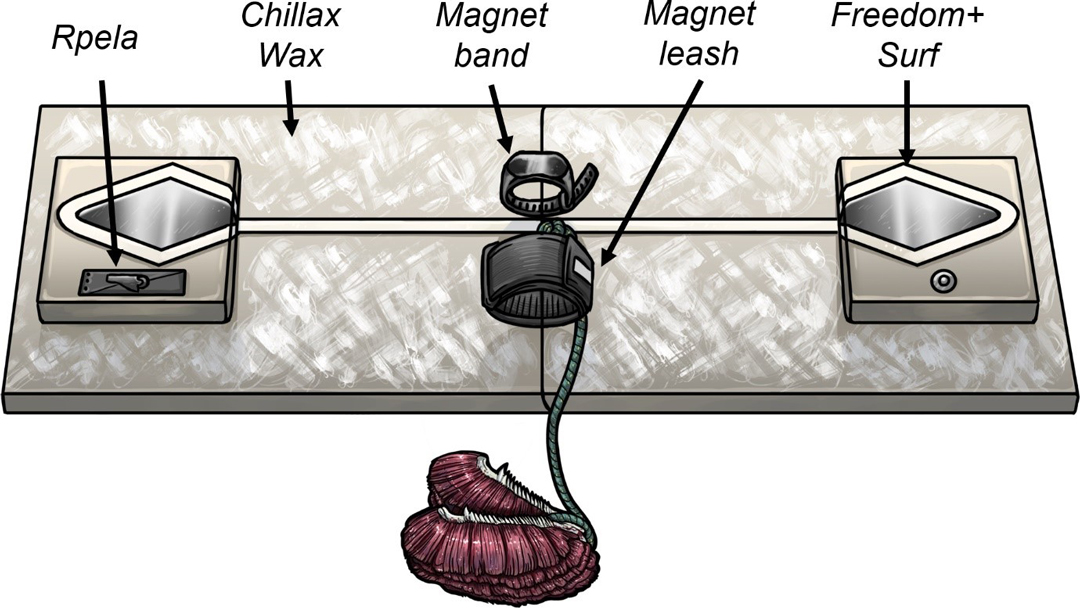 All four other deterrents (Rpela, Sharkbanz bracelet, Sharkbanz leash and Chillax wax) were shown to have limited to no measurable effect on white shark behaviour. It was noted that the study was not able to detect any effect of a deterrent of less than 15%, however, if you are spending considerable sums of money on a shark repellent device, you would probably expect it to reduce your probability of a shark bite by more than 15% anyway.

There are a few take-home messages from this study that are important for anyone considering investing in a personal shark deterrent:

For the non-surfers out there, a similar study by the same researchers was conducted in 2013 on the Shark Shield Freedom 7 device that is marketed for divers. It attaches to your ankle and is regularly worn by commercial abalone divers in Australia. The study showed that the Freedom 7 effectively increased the time it took for a shark to take a static bait, and significantly reduced shark interactions with a towed seal decoy.

So, at the end of the day, should you invest in a personal shark repellent device?

At Shark Spotters we believe that if you can afford it, you should do it, but only buy one that has peer-reviewed scientific evidence of its effectiveness.

No shark safety techniques, whether personal shark deterrents or beach wide safety measures, can guarantee your safety 100%. However, if a device is shown to be effective in reducing the risk of encountering a shark significantly, it is a worthwhile investment in high shark-risk areas, particularly if there are no other shark safety measures (such as Shark Spotters) in place where you are surfing.

For more ways in which you can reduce your risk of encountering a shark see: http://sharkspotters.org.za/safety/shark-safety-advice/

Find out more about how shark repellents work.