The view of the Quoin Point lighthouse from the sea. © Photo © Alison Towner
By Alison Towner, 19th August 2015

On Thursday 11 June our team from the Dyer Island Conservation Trust, including international marine volunteers, set off to deploy the first phase of acoustic receivers that will form an integral component of my PhD research into the behavioural ecology of white sharks and how they use the habitat around Gansbaai on South Africa’s south-western coast. We began the expedition by retrieving and replacing the line of receivers previously deployed outside Dyer Island. These Acoustic Tracking Array Platform (ATAP) listening stations had been moored to the ocean floor by the South African Institute of Aquatic Biodiversity (SAIAB) as part of a network deployed along the South African coast, and Dr Rhett Bennett of the SAIAB joined us that day. 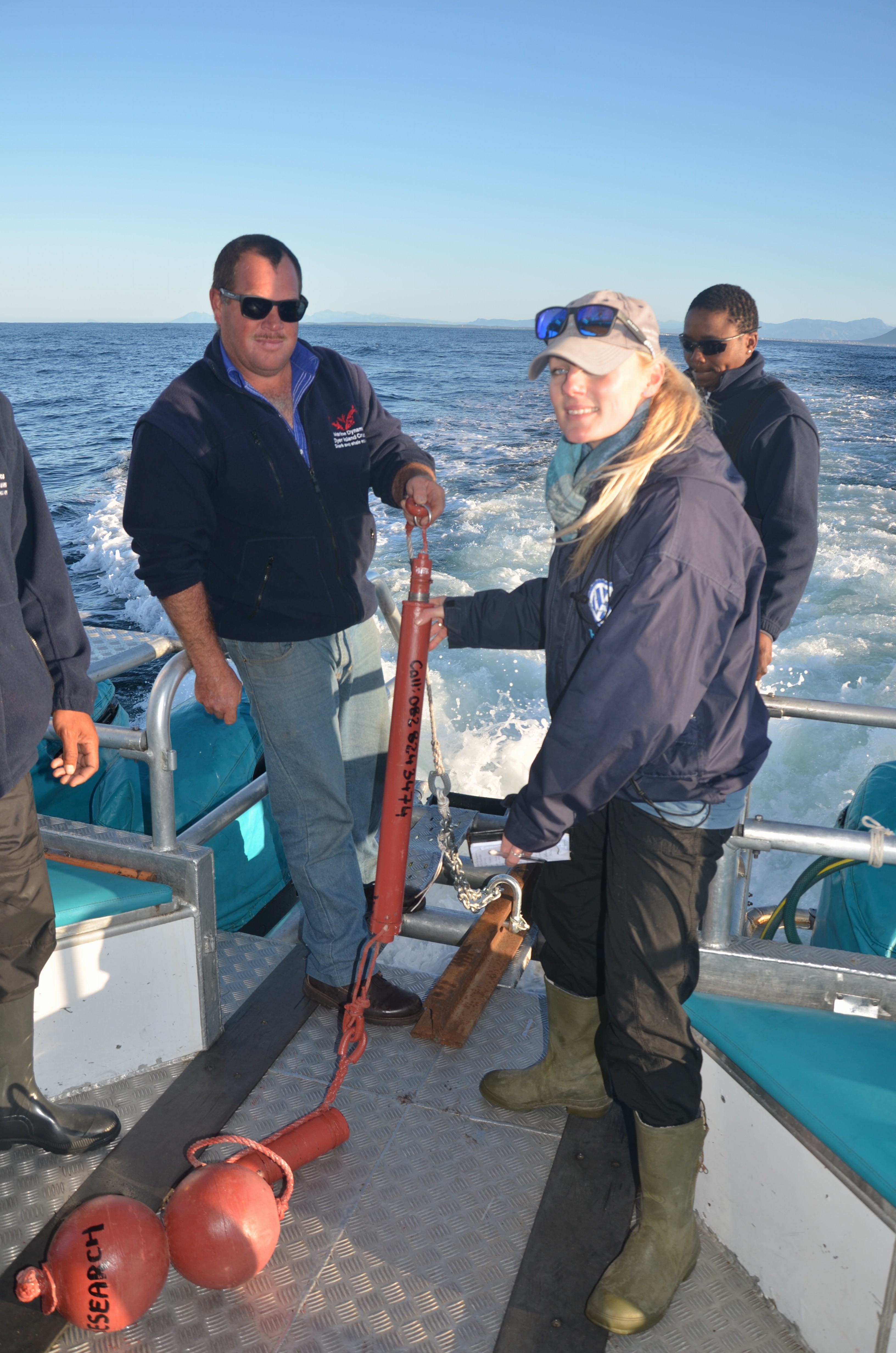 We were lucky – it can take hours to retrieve the listening stations and they often come up severely befouled, but each ATAP station surfaced within six minutes and all were relatively clean. Within an hour we had deployed the new stations and were on our way to other sites around Gansbaai and Dyer Island to drop the first phase of receivers for the white shark passive tracking project. Based on data from previous manual tracking and our skippers’ extensive knowledge of white shark hotspots, each deployment site was carefully selected to provide optimal coverage for the acoustic tags. It was also imperative that we place the receivers at safe depths, given the tempestuous nature of this ‘Cape of Storms’! 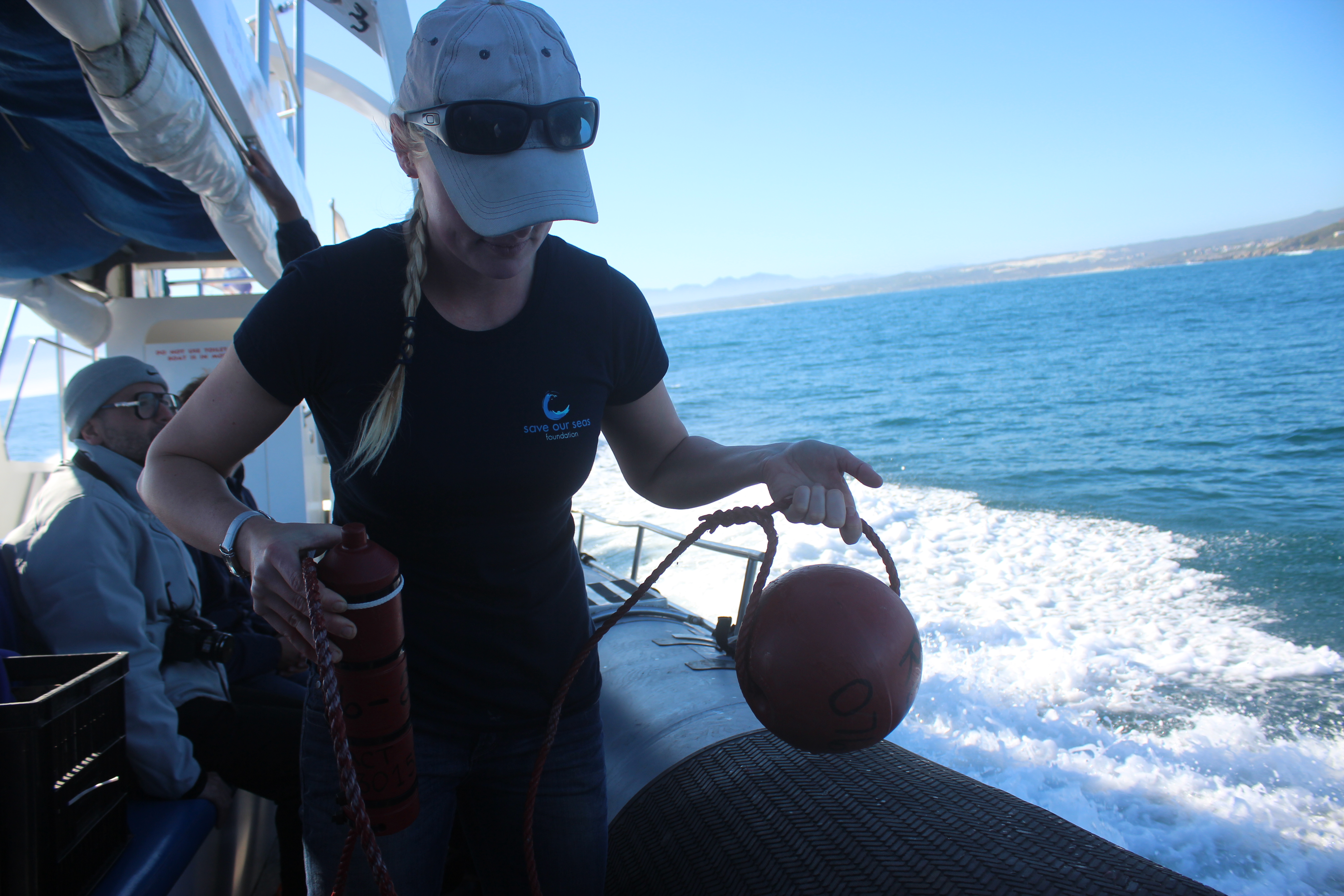 The second phase of the project took place on Saturday 20 June. Perfect windless conditions prevailed as the crew and I launched Whale Whisperer to deploy the rest of the receivers further afield in the peripheral areas of Walker Bay, Danger Point and Quoin Point. It was a beautiful afternoon and our team was treated to sightings of humpback whales tail slapping in the sun and albatrosses circling and elegantly soaring past, showing off their impressive wingspans. Dyer Island Conservation Trust CEO Wilfred Chivell joined us on this second expedition and our volunteers really enjoyed the information he shared with us while we were sitting off Quoin Point. 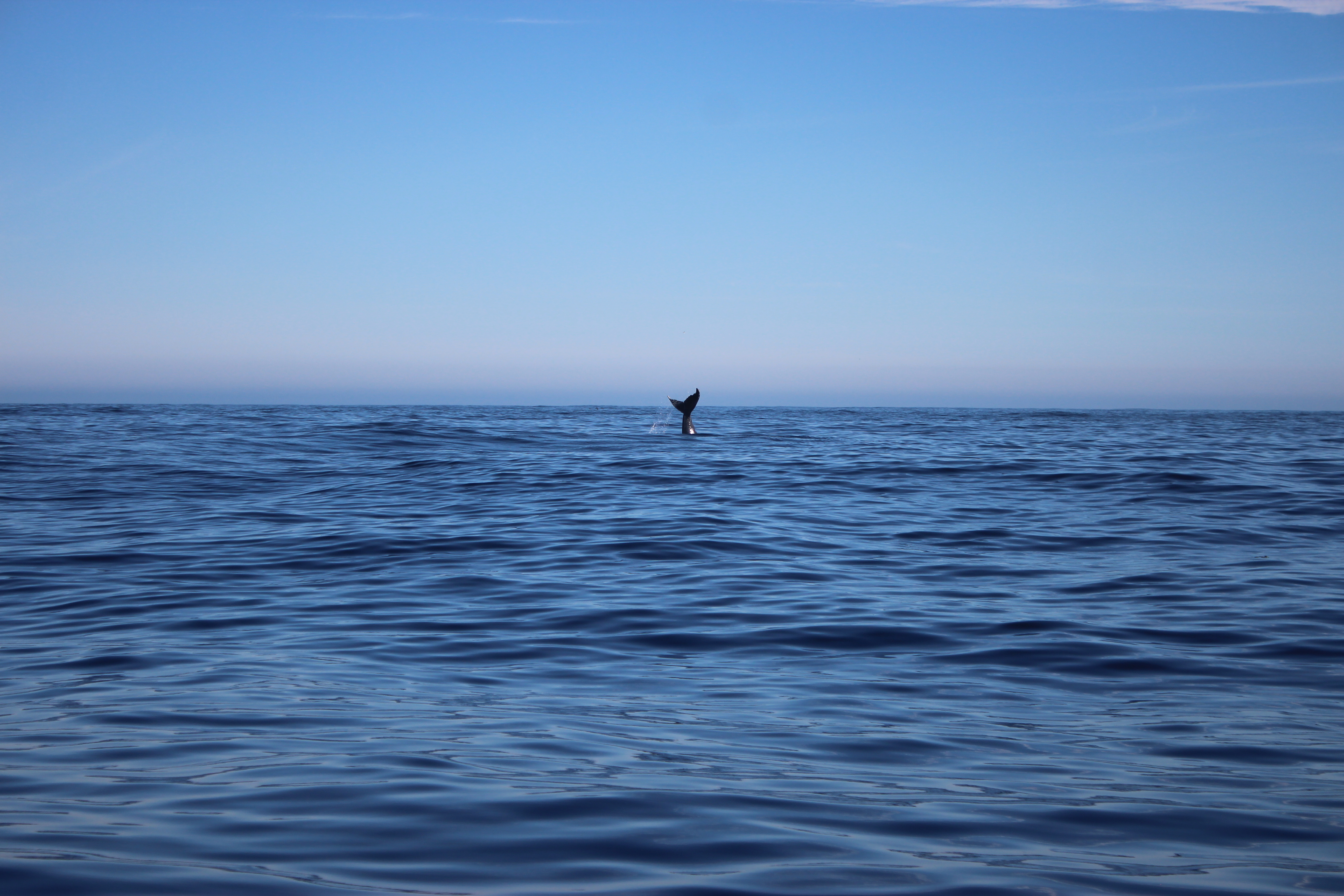 After Cape Agulhas, Quoin Point is the second most southerly point in Africa and several shipwrecks are strewn off its assortment of voracious reefs: the Joanna (1682), the Nicobar (1783), the Doncaster (1836), the Teuten (1881), the Avala (1938), the City of Lincoln (1946) and the Esso Wheeling (1948). Wilfred talked of his amazing experience salvaging the Nicobar, a Danish vessel he and Louis Groenewald discovered in 1987 while free-diving. It turned out to be the largest find of Swedish copper-plate currency in the world and it took more than four years to bring it all to the surface! 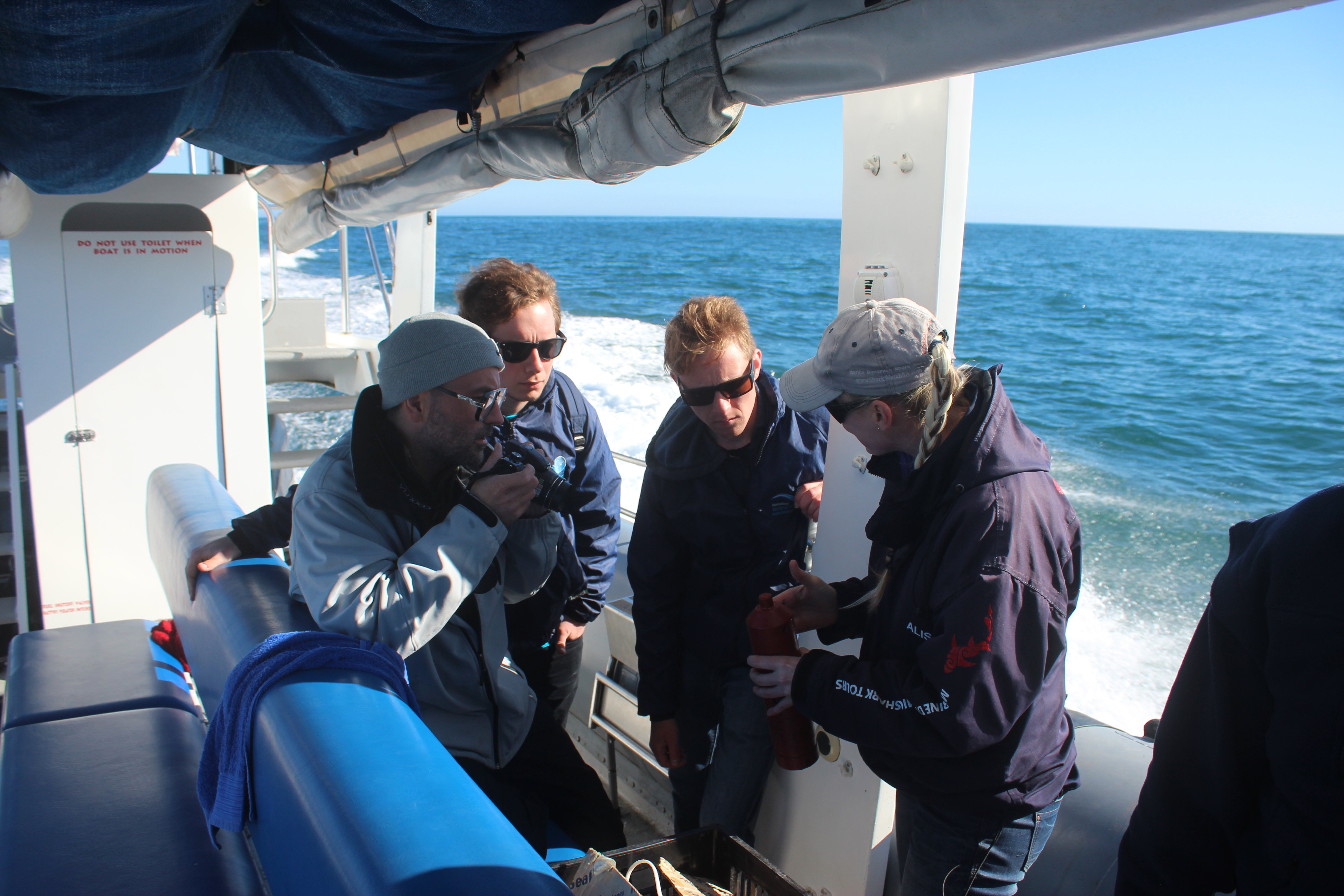 Quoin Point, with its small colony of Cape fur seals, is also known as a white shark hotspot and is an essential component of my white shark passive tracking study. Wilfred also spoke of the ‘old shark hunting’ that went on around Quoin Point before World War II. White sharks were specifically targeted for their large, oily livers, which were apparently a commercially valuable source of vitamin A at the time. After extracting the liver, the local fishermen would discard the rest of the shark, an incredibly wasteful practice back at a time when little scientific data existed to help protect the species. Fast forward 80 years and we have a very different situation at Gansbaai, as the white shark has been nationally protected for the past 20 years or more and its ‘worth’ has shifted to ecotourism and research. 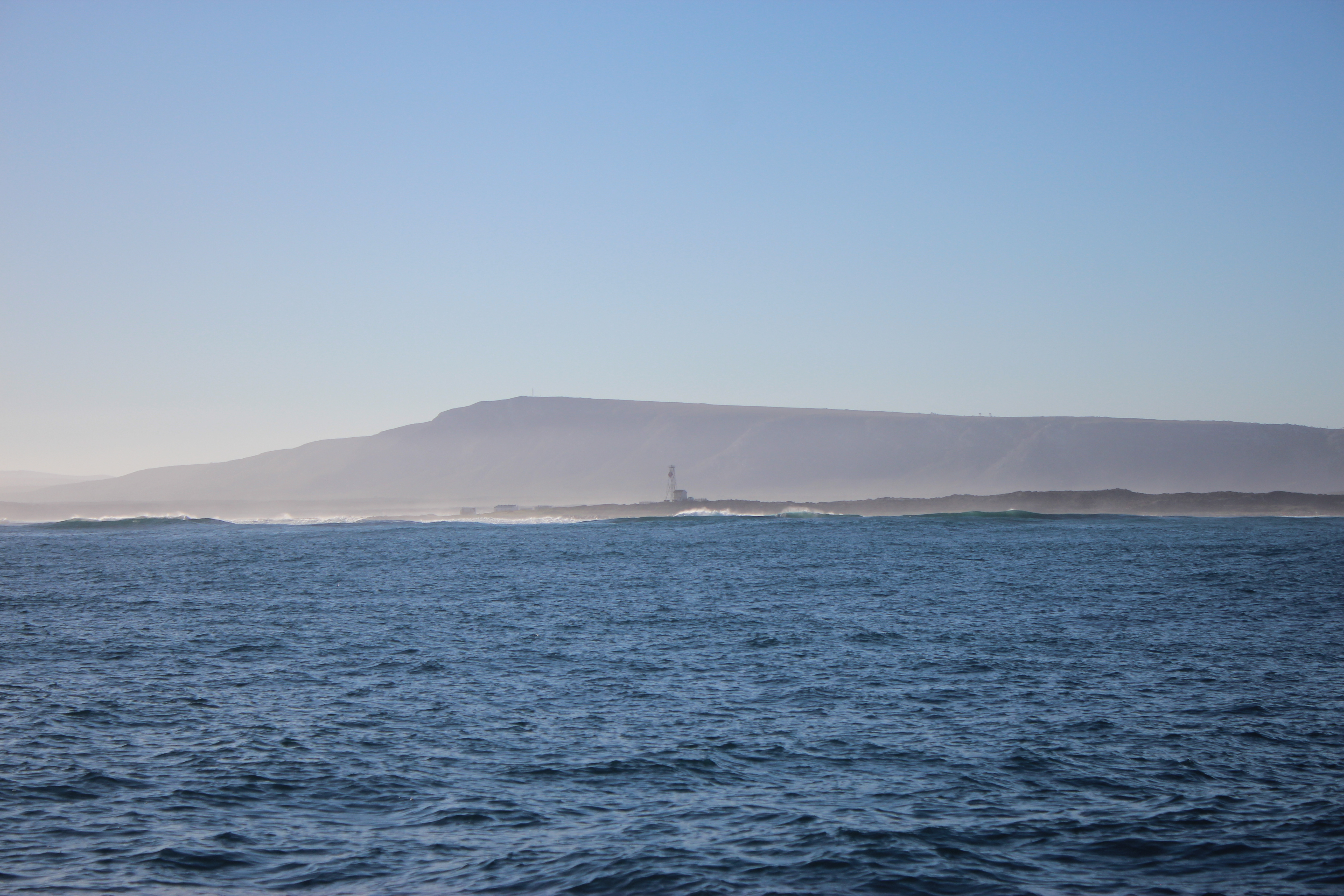 All in all, both expeditions were a great success and we look forward to reviewing the data from our tagged marine subjects in six months’ time. I’m particularly interested to see to what extent the white sharks of Gansbaai and those of the peripheral locations are connected. 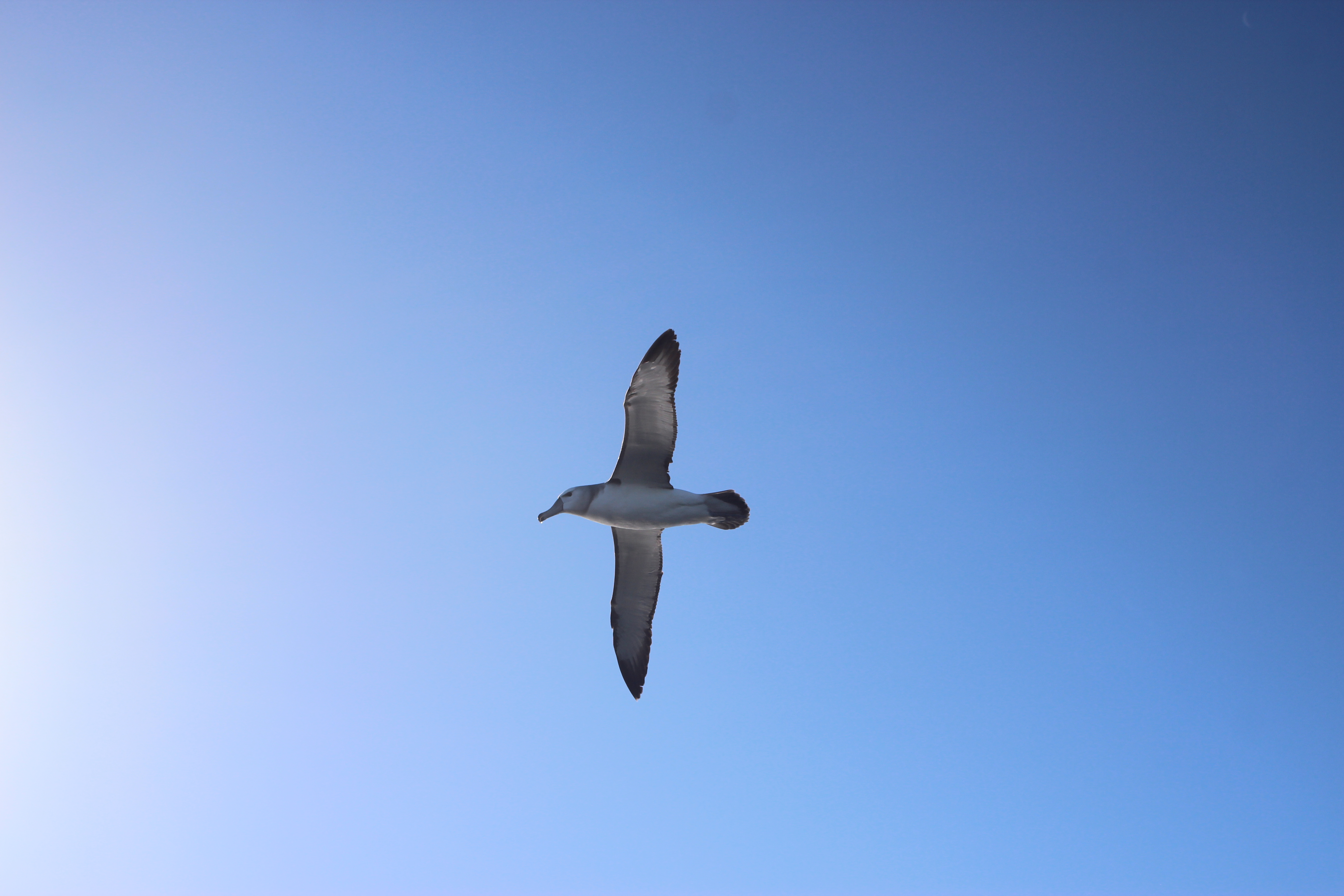 This project has been in the making since late 2013 and would not have been possible without collaborative funding from the Dyer Island Conservation Trust and the Save Our Seas Foundation. I would specifically like to thank Dr Rhett Bennet, Dr Paul Cowley (SAIAB and ATAP), Sarika Singh, Darrell Anders (Oceans and Coasts) and Dr Malcolm Smale (Bayworld Museum) for their knowledge and expertise on Vemco VR2W mooring designs. I would also like to thank in particular Tami Kaschke, Peter du Toit, Kira, Francois Swart, Kelly Baker, Jan du Toit, Hennie Otto, Sean van der Linde and Ono Keller, as well as the rest of the Marine Dynamics, Dyer Island Cruises and Dyer Island Conservation Trust ‘family’ for their unparalleled support as always!