CMS CoP11: A Guide to a Big Week for Mobulid Conservation

Today marks the start of what we hope will be another game-changing week for manta and mobula ray conservation. From the 4th – 9th November 2014, an important convention will be taking place in Quito, Ecuador, known as the Convention on the Conservation of Migratory Species of Wild Animals (a.k.a, CMS). Isabel Ender and Daniel Fernando of the Manta Trust team will be participating in the event, helping to hopefully secure important CMS protection for mobulid rays. We will also be working closely with many individuals from several different marine NGOs and IGOs, as part of one large collaborative effort to support the shark and mobulid proposals.

However, before the big week starts, let’s take a step back. Many of you may have never heard about CMS prior to all the media coverage. Those of you that have may be a little uncertain as to what the big deal is and exactly how it will help in global conservation efforts for manta and mobula rays. In an attempt to clear a path through the fog of confusion that often surrounds these big, political conservation events, we’ve pulled together information from CMS, our NGO partners and beyond to create an informal ‘guide’ to CMS 2014.

Getting international legislation put in place to conserve endangered species is important. It is fundamental in the process of controlling, reducing or removing the various threats that are driving population declines in the world’s species. CITES is an example of one such piece of international legislation, put in place to control the trade of products sourced from endangered species of plants and animals.

However, animals are mobile. They do not conform to boundaries and borders. Instead they often migrate through several countries, in a quest to search for food or mates. This means that a species that may be effectively protected in one country, may stray into another where they are not. This problem is especially true for highly mobile species that live in the ocean, including manta and mobula (devil) rays. Mantas and mobulas (collectively known as Mobulids) often travel far and wide – even reef manta rays (Manta alfredi), typically considered highly residential, move around more than you might expect. The Convention on the Conservation of Migratory Species of Wild Animals (CMS) is uniquely positioned to address this problem.

How does CMS work?

Every three years, CMS brings together 120 Parties and States from around the world to an event known as a Meeting of the Conference of the Parties. This week is the 11th time the CMS Parties have gathered, hence you will also see it referred to as CoP11. The aim of the meeting is to lay out the legal foundation needed for internationally-coordinated conservation measures to be put in place throughout a species’ migratory range. This process starts with member states putting forward proposals for various species that they believe need some degree of protection under the CMS convention.

CMS offers differing levels of protection for species, which it separates into categories known as appendices. For example, when a species ‘applies’ and becomes listed under CMS Appendix I, this means that the 120 Parties are obligated to impose strict protection for that species. In comparison, if a species is listed under Appendix II, the protection given to the species isn’t as stern – Appendix II encourages member states to cooperate with each other to form regional or global agreements regarding the management of that species.

What’s being listed at CMS CoP11?

This week’s 11th Meeting is a big one for sharks and rays. Over 20 species of sharks have been proposed for listing under either of the CMS appendices, including the silky shark, three species of thresher shark, two species of hammerhead shark and all species of sawfish. In addition, the Government of Fiji spearheaded proposals for the Reef Manta Ray (Manta alfredi) and ALL nine species of mobula rays, their smaller cousins. Giant, or oceanic manta rays are already listed on CMS Appendices I and II thanks to proposals made at the last CMS meeting in 2011.

How will the CMS listings benefit Reef Mantas and Mobula Rays and why is this protection urgent? 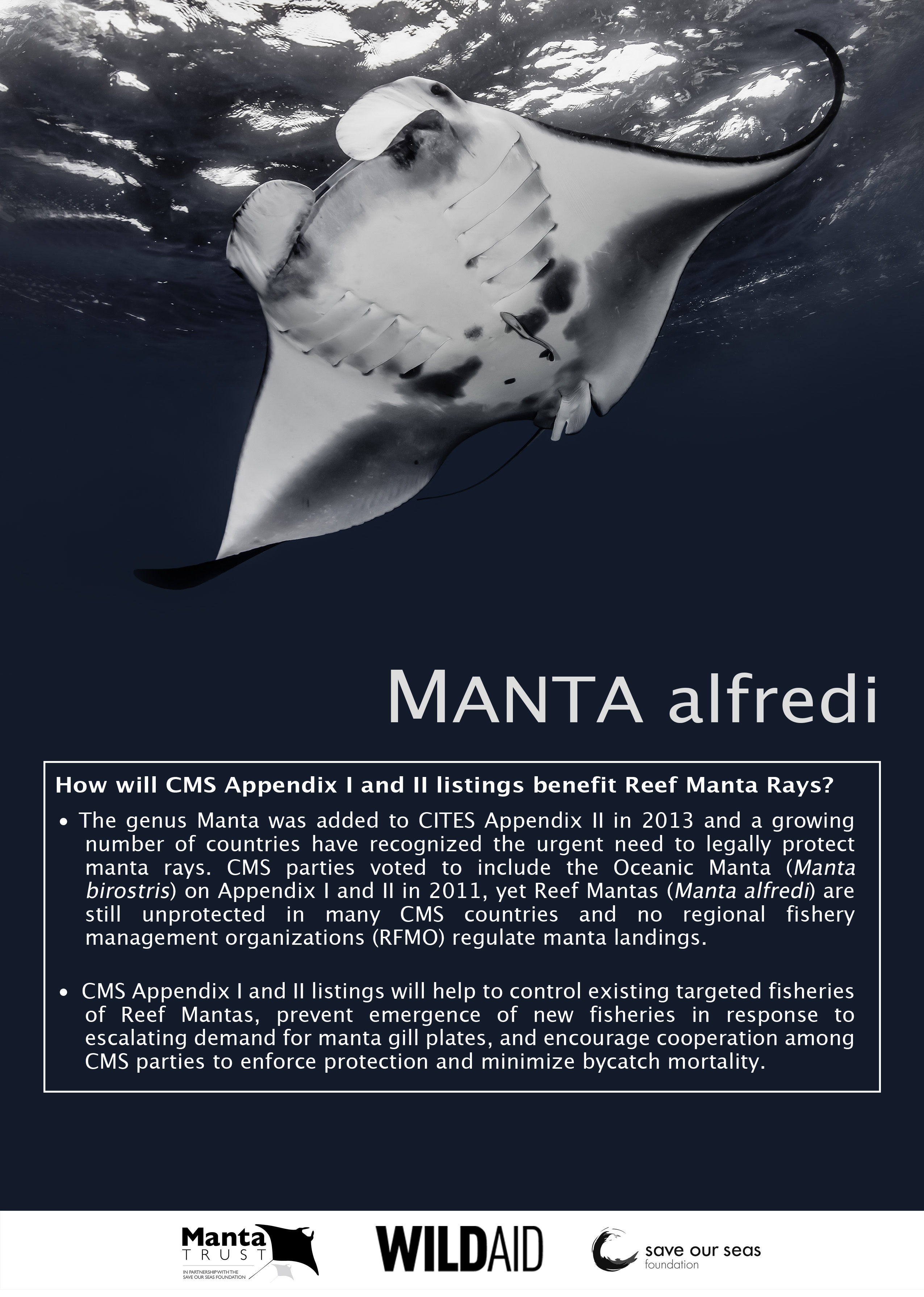 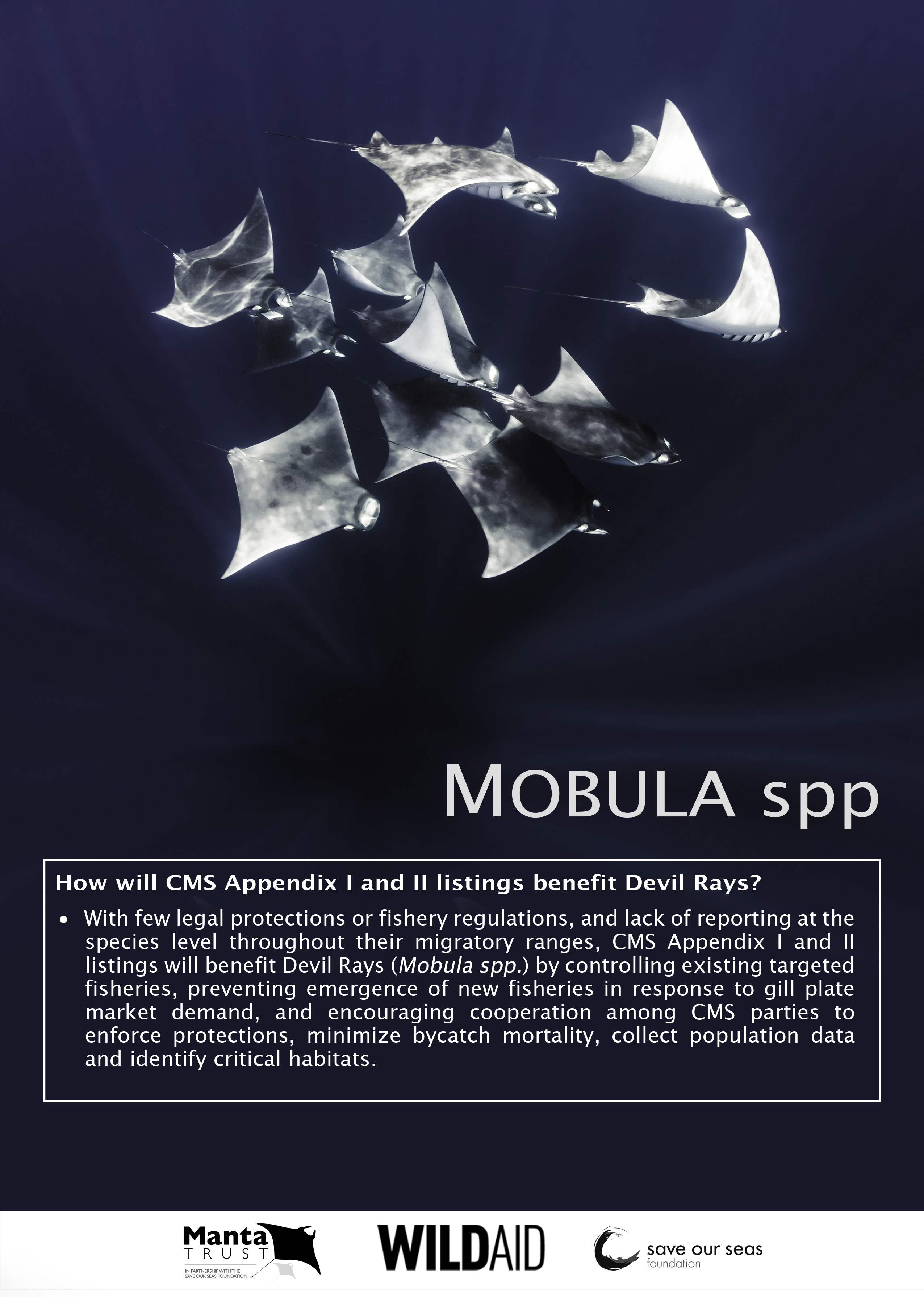 Along with our partners at WildAid and the Save Our Seas Foundation, we’ve put together these posters to answer these questions!

How is The Manta Trust involved?

The Manta Trust has been invited to become a Cooperating Partner to the Sharks “Memoranda of Understanding” – this means we will be actively involved in supporting the implementation and protection of Manta and Mobula species.

CMS partners with various groups, including inter-governmental bodies, non-governmental organisations and the private sector. Why? Well if a species is successful in their application to be listed under CMS, that is only the first step. The ‘paperwork’ has been finished and filed away. The next step is to actually turn the words on the paperwork into action. To do this, CMS partners with groups, like The Manta Trust, that can help make sure the new protection is put into effect. Cooperating with these groups also helps CMS to reach a wider audience and helps to raise public awareness of the importance of conserving migratory species on a global scale.

When will we know which sharks and mobulids have been successful?

The shark and ray proposals are pegged for consideration on Thursday 6th November 2014, but this is subject to change. Whilst we’ll be keeping you posted via social media throughout the week (see below), we may not hear a final decision until Monday 10th November 2014.