Changing the fate of sawfishes in Bangladesh: from plentiful to imperilled and now a promise to protect

‘I had to call on two other boats for help and there were 19 of us altogether, struggling for hours to pull the giant out of water. It was the king of fish, a sawfish, and it weighed more than a ton. As we pulled it out of the water, it gave birth to five pups. In the water, you have to fight for a long time to catch and land such a majestic specimen.’ Abdul Gani, an artisanal fisherman, was sharing his story of catching a sawfish in 2015 in the shallow coastal waters of south-western Bangladesh. The boat owner sold it for a huge fortune – the pups too. When I asked about the live pups, Abdul stared at me and I saw remorse in his eyes. It was the first ray of hope I had seen. If fishers such as Abdul are made aware of the need to protect such majestic creatures, they can become pioneers of sawfish conservation in Bangladesh.

A private collection of a sawfish rostra collected from a fishing village by the collector. Photo © Atif

This sawfish lost out to 19 men, its fate determined by thousands of greedy people around the world. Once abundant along beaches and at fish landing sites, sawfishes were the most common, yet unnoticed, marine mega-fauna of Bangladesh. Within just three decades they have become the rarest. Fisheries biologists tell us that there was a time when pups and juvenile sawfishes were very often seen at the landing sites, but nobody really cared. 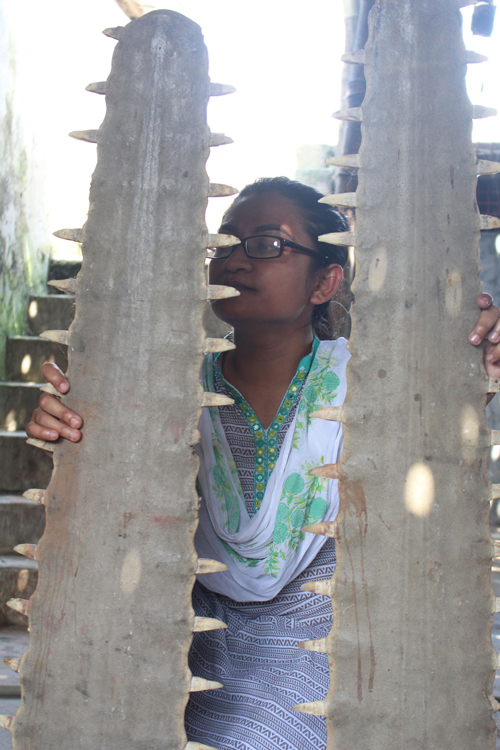 Sawfishes are among the top predators of the marine and riverine coastal ecosystems. They are also considered to be the most threatened species of the elasmobranch family, having experienced substantial population declines due to overexploitation because of their socio-economic value and being taken as by-catch. In some cases the declines have been unprecedented; in almost 20 countries sawfishes are now locally extinct and 43 countries have reported the loss of at least one species. 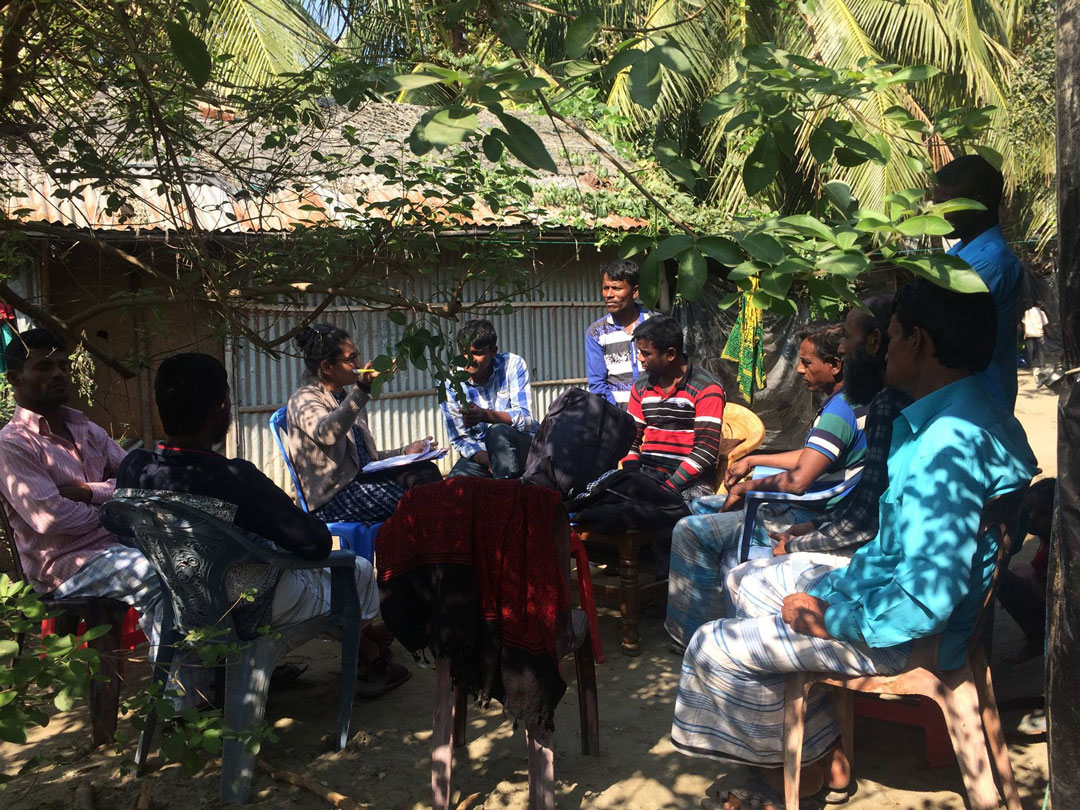 It is extremely important to work with fishers to ensure the conservation of this rare and endangered species. Here we are conducting a focus group discussion on the critical habitats of sawfishes. Photo © Aparna Riti Biswas

Bangladesh is a river-rich country with very productive estuaries, shallow seas along its coast and a large expanse of mangrove forest, known as the Sundarbans, which receives a huge influx of sediments and nutrients, making it a unique estuarine ecosystem for evolutionarily distinct species – and one that embraces key habitats for sawfishes. Historical reports and past regular landings of adult and juvenile sawfishes, especially the largetooth sawfish, vouch for this fact. However, effective conservation recovery plans to protect sawfish species from regional extinctions and biogeographic shifts are hindered by a lack of baseline data and the catching, and trading, of sawfishes that is neither regulated nor documented. 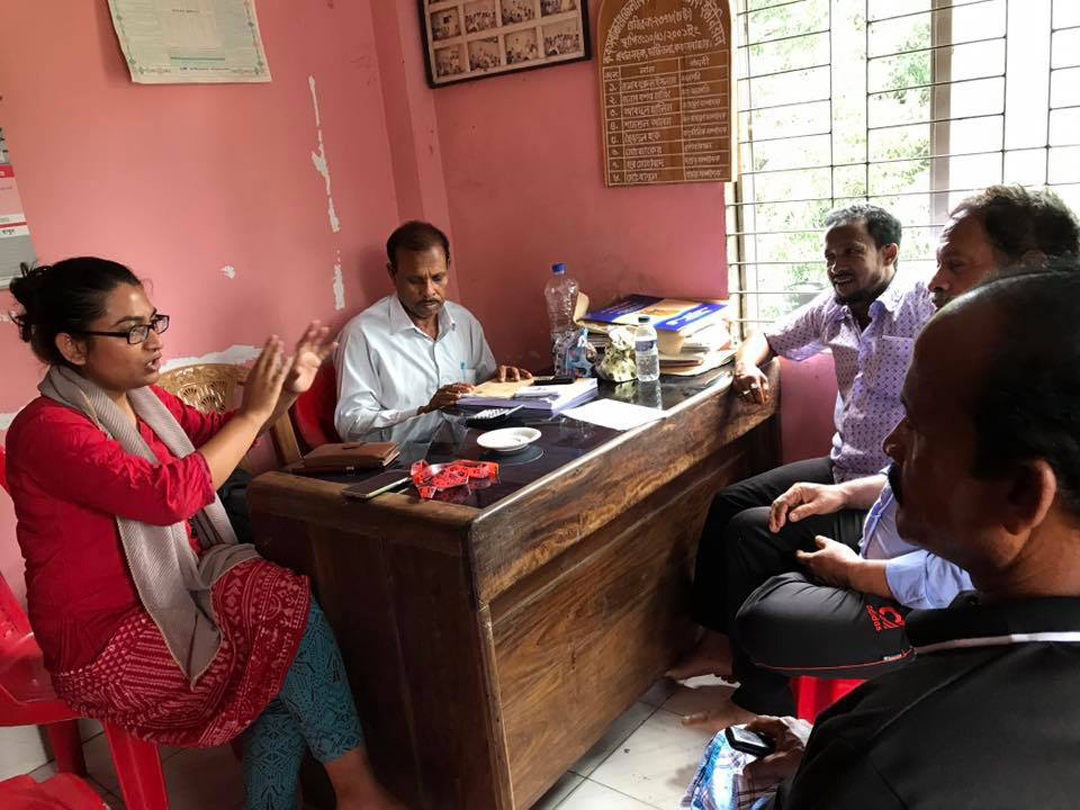 Fishers' cooperatives are great places to make allies with fishers and to understand their motivation to work for conservation. If we can understand the socio-economic paradigm of fishers, this can lead to great insights for making effective plans. Photo © Aparna Riti Biswas

So far our study has recorded approximately two sawfish landings per month and 27 adult largetooth sawfish landings in just a year in the south-eastern coastal region alone. As this region covers less than half of the coast, it is likely that a larger number of sawfishes is being landed along the entire coast. We have also searched museums for old sawfish rostra and have confirmed the presence of three species: largetooth sawfish Pristis pristis, green sawfish P. zijsron and narrow sawfish Anoxypristis cuspidata, which represent considerable diversity for a small country and coastline. However, the green sawfish has been reported just once and no confirmed record of the narrow sawfish has been found in the past 10 years, possibly due to these species’ rapid decline. 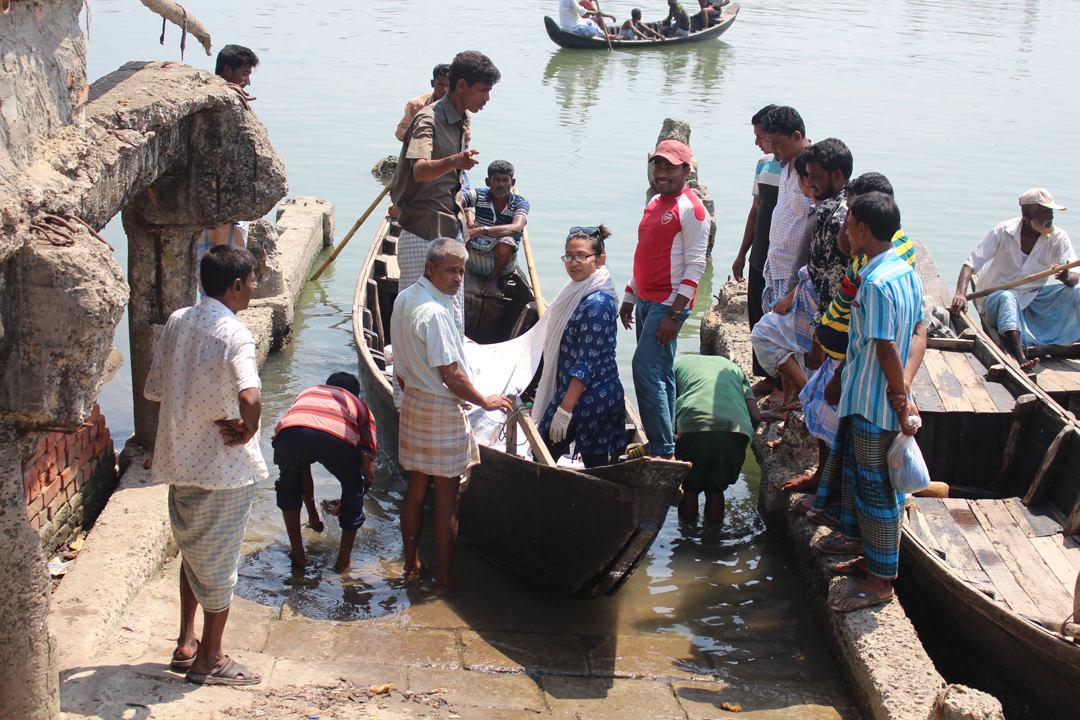 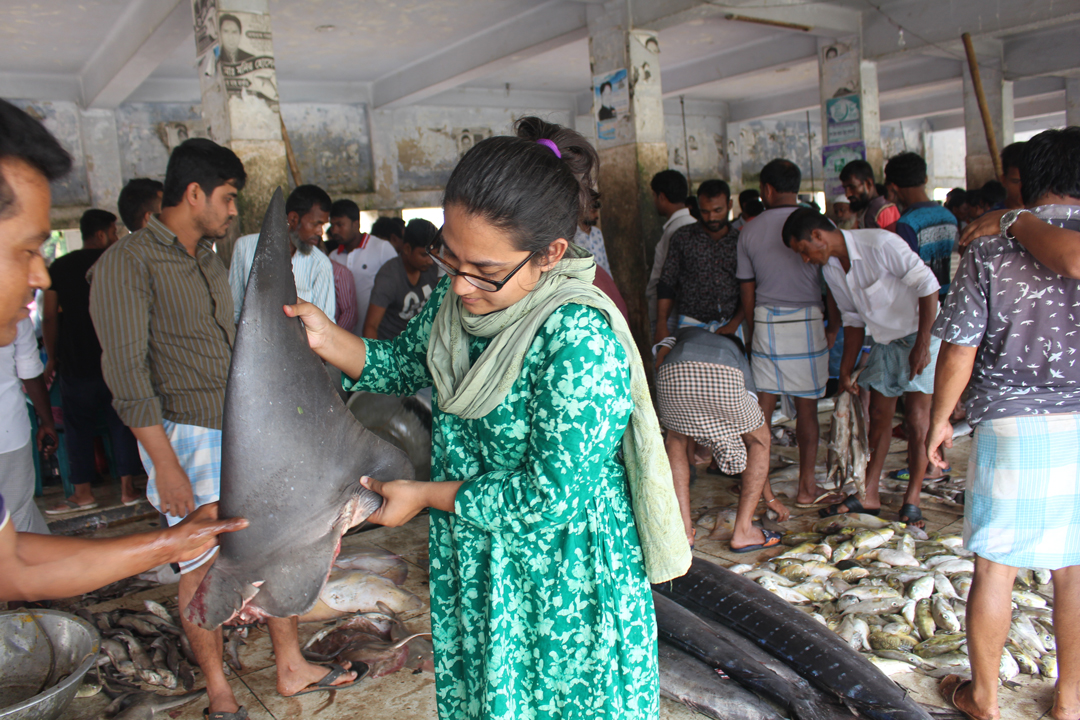 Being extremely valuable in domestic and international markets on account of their fins and their supposed medicinal value as a cure for cancer, every sawfish catch is very important to impoverished fishers who are unaware of the species’ conservation value. In addition, loss of habitat due to shrimp aquaculture and the illegal felling of timber, illegal fishing and the use of unauthorised fishing gear in the Sundarban Reserve Forest, and unmonitored trade make the situation extremely grim for sawfishes in Bangladesh. 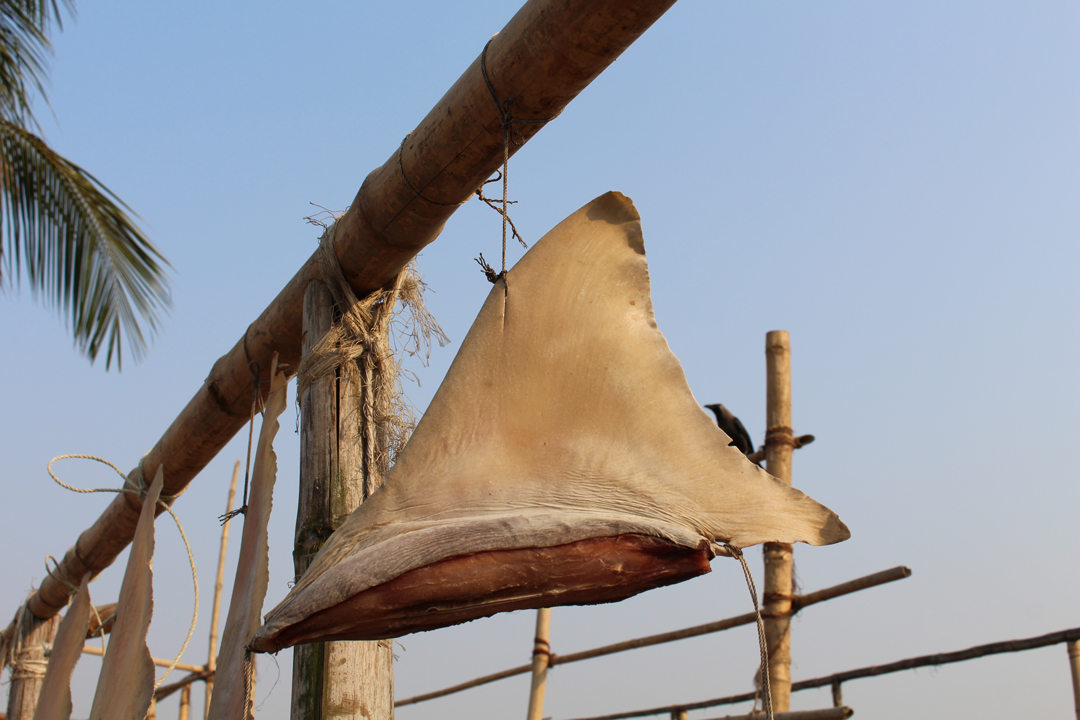 A sawfish fin is being dried to be sold in the international market in one of the processing centres of Bangladesh. Photo © Alifa Bintha Haque

We need to change this scenario. We can’t blame the fishers, as they have never been included in policy-making nor been made aware of the conservation importance of these fishes. My team is determined to change the fate of sawfishes in Bangladesh by means of a phase-by-phase action plan. We will identify critical habitat, make fishers aware, encourage the live release of caught sawfishes and conduct regular monitoring of landings. We plan to consult the fishers when we identify critical habitat in our territorial waters and in doing so we will help them to understand the importance of their own resources. We are using mixed methods of social and sophisticated ecological science to achieve this. We believe only management plans pioneered by and inclusive of the fishers can bring positive change. We are determined to leave no stone unturned in our efforts to improve the fate of sawfishes in Bangladeshi waters. 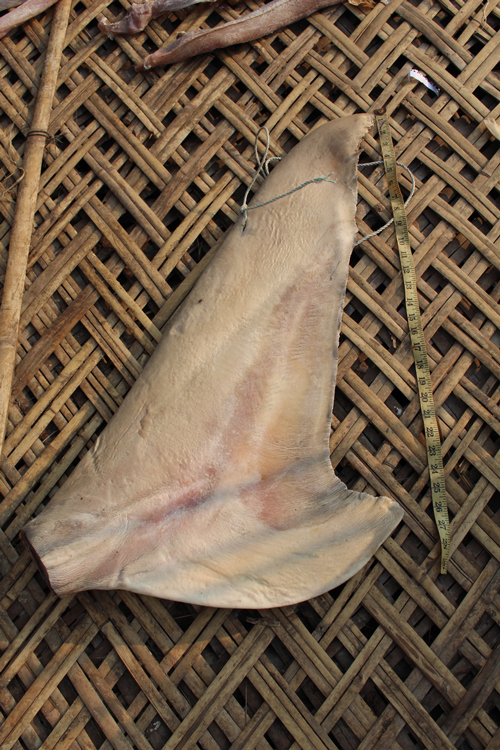 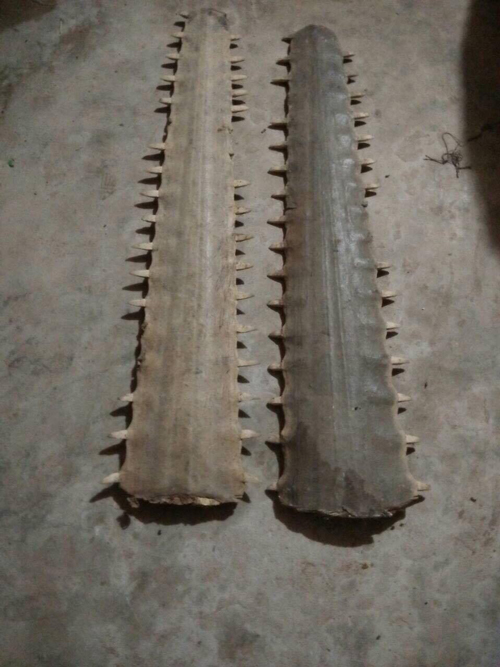 A largetooth sawfish rostra. The photo was shared by the network of locals to helping the author gain a better understanding of the catch trend. Photo © Alifa Bintha Haque

Project
Honing in on habitats