This filming season we’ve done it all. We’ve spent days at sea travelling to faraway islands, boarded fishing boats in all weather conditions, and even climbed mountains to get better signals to locate lost tags!

The first filming location of the year was Cagayancillo, an archipelagic municipality in the middle of the Sulu Sea. Arriving in the aftermath of Typhoon Odette (international name Rai), I travelled with Kymry Delijero from WWF-Philippines and Titus Cañete from LAMAVE to assess the situation on the island and the damage to the coral reefs. Often when natural disasters hit, we focus on the impact they have on humanity. Still, often the natural environment suffers just as much, and when those resources also provide for your people, this can have an added effect on communities.

This was a challenging trip, partly due to the circumstances but also because the typhoon had disrupted communities, and so it also became a peak time for the transmission of Covid-19. This meant the team, and I spent weeks in isolation before travelling to the remote municipality. Fortunately, once we were there, things became easier as we joined a remote community and were able to work with key stakeholders for the documentary.

As the Philippine summer arrived, so did the whale sharks. Next up was documenting the research led by LAMAVE researcher Ariana Augustines and the experience of other stakeholders whose lives are intertwined with these giants. Our team jumped from tour boats to fishing boats to research boats to document the different perspectives of the people living alongside this enigmatic species.

A key aim of the project is to raise awareness about the value of sharks and rays, the threats they face, and the solutions to ensure their conservation in the province of Palawan. To achieve this, we needed to hear from different stakeholders to identify and promote the removal of barriers to ensure their conservation. Understanding different stakeholder perspectives are crucial if we are to expand dialogue and remove barriers – this is why the interviews were such an important part of the filming and why they were largely conducted at the end of the season.

Juggling different people’s timetables was a challenge, especially for fishermen, as their lives are influenced so heavily by the weather and the sea conditions. With more and more challenges facing them, they were keen to take every chance possible to get out on the water. Consequently, it took us longer than I expected to find a time with decent light when they were not at sea. Filming the Rangers of Tubbataha Reefs was also a challenge as it meant scheduling time both at the station offshore in Tubbtaha Reefs Natural Park as well as at home on the mainland. 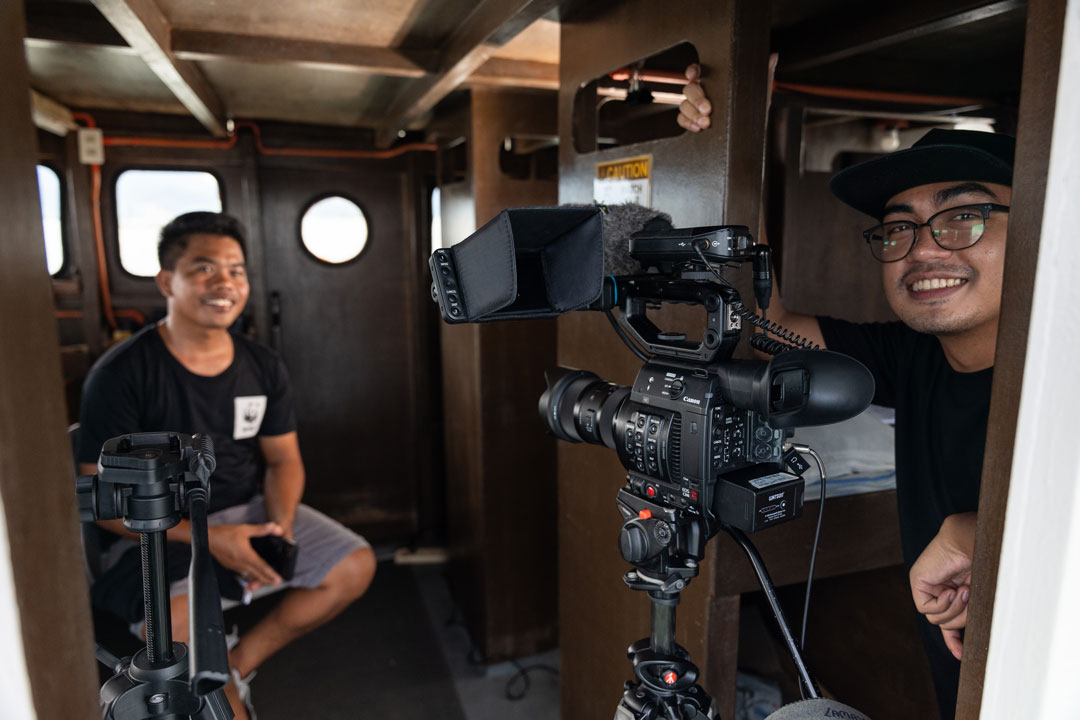 That’s a wrap - one of the last interviews we filmed was that of WWF-Philippines researcher Kymry Delijero. Photo © Sally Snow | LAMAVE.

The success of the filming season has been down to the stakeholders. It’s been such a privilege to have had an insight into so many people’s lives, to hear their stories and to listen to their concerns and ideas regarding protecting sharks and rays. We’ve been welcomed into many homes – setting up lights and cameras and having multiple family members join the filming crew, holding reflectors, checking the shot and listening contently to the interviews. We’ve eaten rice and ulam (stew dish) onboard fishing boats bobbing on the sea, we’ve high-fived and laughed after nerve-wracking research moments, and we’ve been nervous mid-interview as rain threatened a once clear sky. It’s been an amazing experience, but now the real work begins. The film’s edit, as well as the screening tour and impact campaign!