Proof that one person really can make all the difference

As tempted as I was to kick this off with some famous quote by a legendary historical figure about the value and importance of education, I will resist that urge. Mostly because I think we are all aware of how critical education is at all levels in modern society, and, well, the dramatic famous-quote-intro has become somewhat of a cliché. The point is, the important role of education cannot be overstated, and this was well-recognised way back when Shark Spotters was in its conception phase. Thus, it became one of the four pillars upon which the programme was built, along with safety, research and conservation.

The tricky thing about education though, is that it is an impossibly broad concept, and there are so many different messages that need to be conveyed, different target audiences that need to be reached, and different ways of engaging with people. In the early days of Shark Spotters, we first and foremost had to ensure that people understood how the programme worked and were aware of the risk associated with different warning flags used by spotters. This was done through signage and the presence of shark spotters on beaches to inform and engage with the public. As time went by and social media took the world by storm, we started incorporating the use of these platforms to aid in education and awareness. The target audience was therefore beach-goers and the general public who followed our posts on social media. This was the status quo of education for the majority of the 15 years in which Shark Spotters has been in existence. 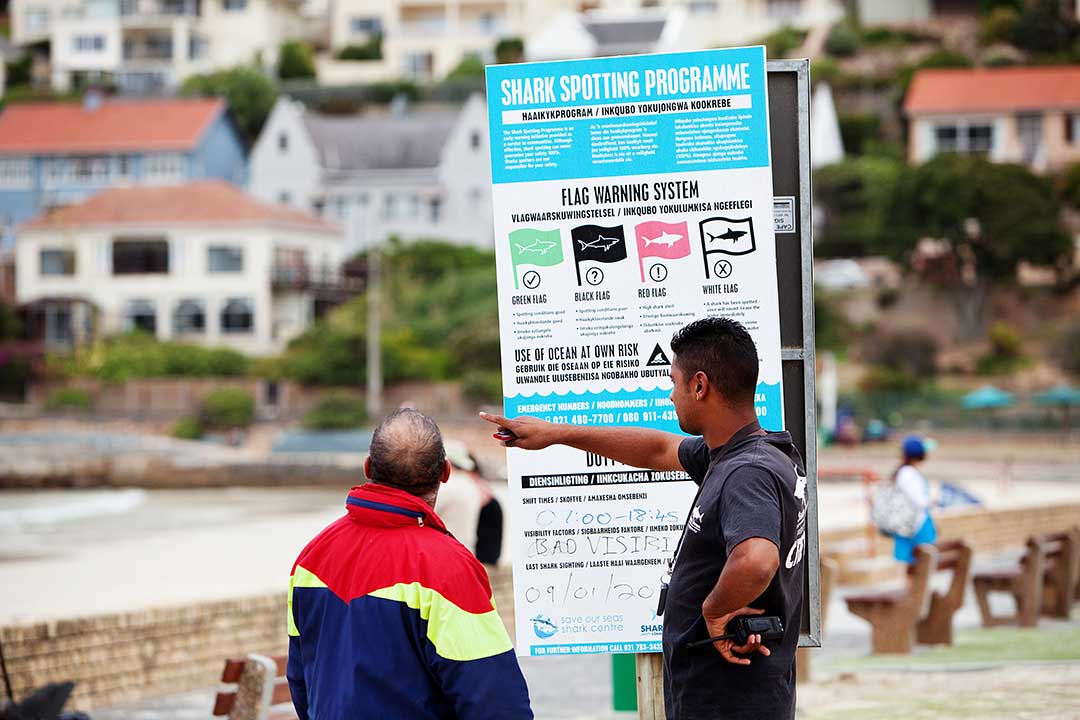 Beach spotters are a useful source of information, and they are always available during duty hours to answer questions and engage with the public. Photo © Shark Spotters.

Enter the one-woman whirlwind, Nicole Lockett, who joined the team in 2016, with the title of “Info Centre Coordinator”. Despite her role originally being the management of our shiny new Info Centre on Muizenberg Beach, Nicole quickly carved a new niche for herself, taking our rudimental education programme and giving it a whole new flair. One of the key target groups that Nicole recognised as missing from our education efforts was of course the youth. Children of all ages, from pre-primary school to high school, became the core focus of Nicole’s efforts. She not only aimed to teach them from a young age how to #BeSharkSmart and responsible when using the ocean, but to appreciate and understand the importance of sharks in our ecosystems, and how we should protect rather than destroy, appreciate rather than fear. But how does one communicate that mouthful to children who in some cases have barely learned to tie their shoes? Well, that is the brilliance of Nicole’s education strategy – turning fairly complex scientific concepts into fun and engaging activities and games that teach kids important lessons, all while singing or dancing or jumping about as children love to do. Nicole’s strategy also primarily targets underprivileged schools from local communities, and for many of these kids, a trip to the Info Centre on Muizenberg beach is the first opportunity they have had to see the ocean or play on the beach, giving them an opportunity to understand why it is worth protecting our coasts and the many marine creatures that call this region home. And if the school’s struggle to finance a trip to Muizenberg, Nicole packs up her games and activities and takes the experience to them. 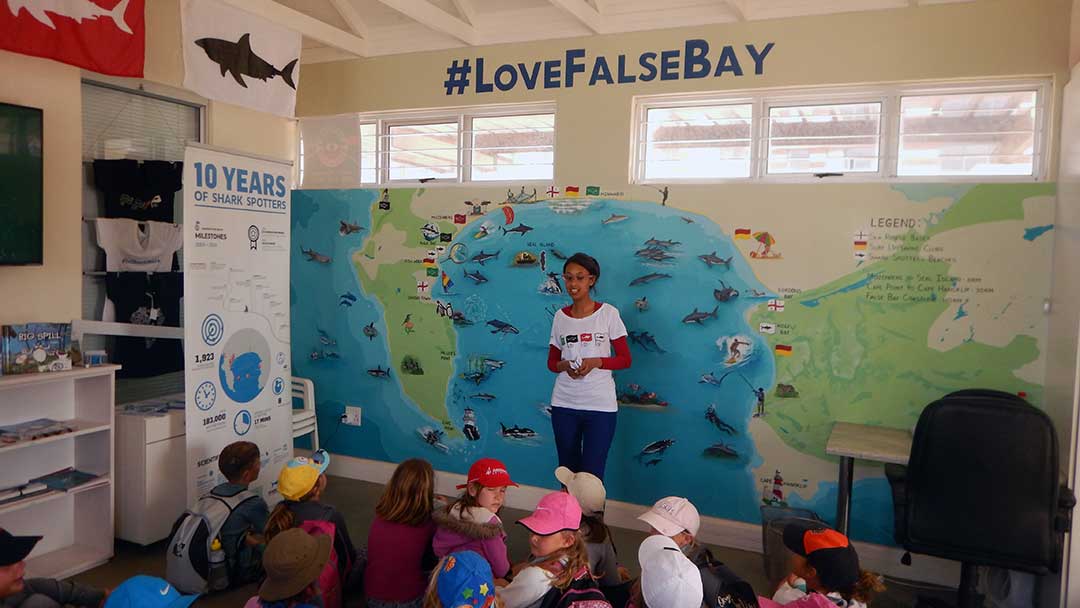 Our education guru, Nicole, in action, teaching young learners how to #BeSharkSmart

Now, as if that is not all impressive enough, the final cherry on this heart-warming cake is this: because our education programme was previously primarily the responsibility of the spotters, combined with a few social media posts, there is almost no budget available for all of Nicole’s outreach activities. But, with a few thousand South African Rand and a lot of creativity, Nicole manages to make a difference in the lives of over 3000 local kids every year and has given so much more meaning to the word “Education” in the Shark Spotters’ ethos. In addition to thinking out of the box, Nicole has taken the initiative to form collaborations with organisations such as the Save our Seas Foundation Shark Education Centre and the National Sea Rescue Institute, which not only increases our capacity and reach but allows kids to learn more diverse lessons ranging from ocean safety and drowning prevention to marine biodiversity and conservation. 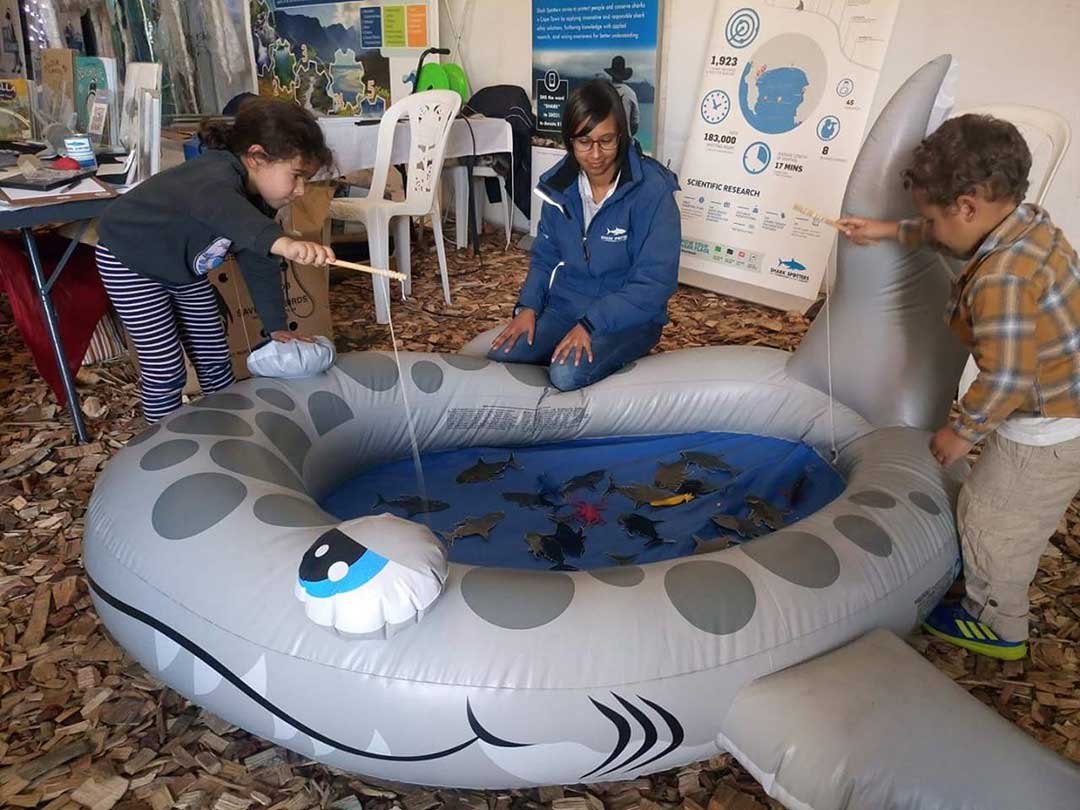 Nicole uses creative and fun activities to teach kids about the importance of sharks and conservation. Photo © Shark Spotters.

So, now that our education programme has been given this unexpected, but much needed to revamp, what does the future hold? The next step is to formalise Nicole’s efforts into curriculum-based lessons, games and activities that can be incorporated into classrooms across South Africa, but primarily targeting local coastal communities. We ultimately aim to reach 10 000 primary school children per year, later developing programmes for high school and tertiary institutions, and providing hands-on experience to older students through our research programme.

It now seems the sky is the limit for our education programme. In just three years Nicole has transformed the entire programme from caterpillar to butterfly, showing that anything is possible if you are willing to put in the effort, and you should never doubt that one person really can make all the difference.