As you all know by now, we are working with juvenile sharks – sicklefin lemon and blacktip reef sharks. And on their own, they would be more than enough for us. However, this is only the tip of the iceberg, and we would like to share a little information about some of our more notable neighbours.
At St Joseph we encounter an abundance of stingrays. There are so many that it seems like we are about to walk on a stingray ‘carpet’. This delightful assortment of stingrays is made up of three species: mangrove, feathertail (the tail really does look like a feather) and porcupine stingrays. They are often hidden under a layer of sand, revealing their amazing form and true colors only when disturbed. Behind such beauty also lurks a little peril. Stingrays have a formidable defense strategy. Most species have a sharp and serrated barb on their tail, which is sometimes coated with a small amount of toxin. When threatened, they will thrust their tail above their bodies and pierce the skin of the perceived attacker. Because of this, we have come prepared with heavy-duty booties. These enable us to cautiously and relatively safely walk across what is essentially ‘the land of the stingray’. 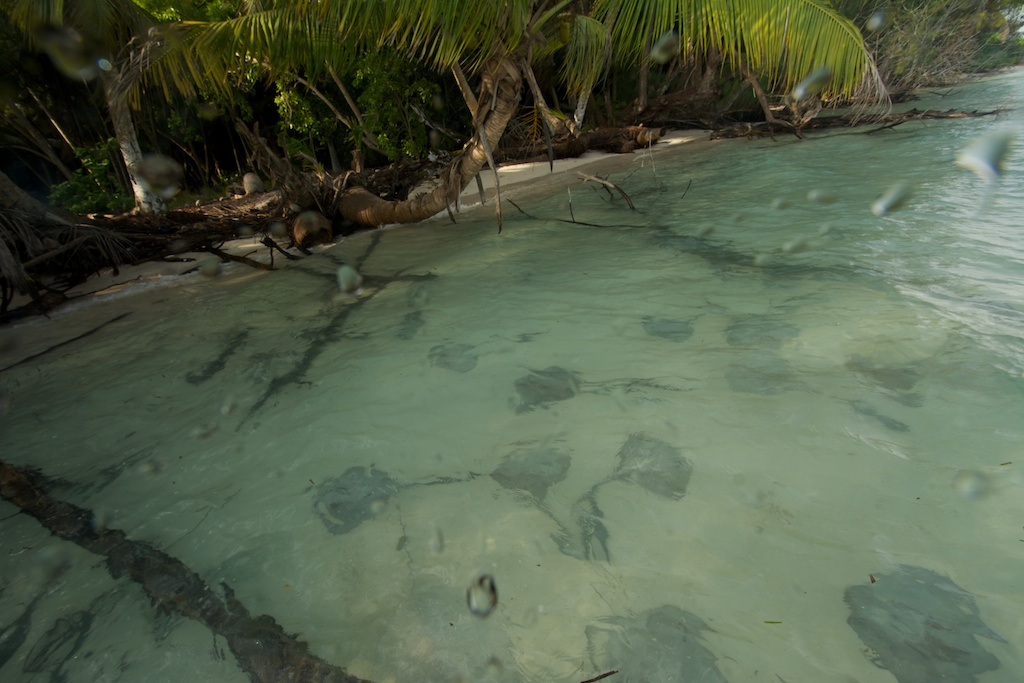 Several feathertail stingrays and a porcupine stingray at the shore of the St Joseph camp. Photo by Chris Boyes | © Save Our Seas Foundation

As we wade or kayak through the myriad of atoll blues, disk-shaped shadows gracefully approach from just below the surface. All of a sudden the head of a marine turtle will rise above the water to take a sharp breath of air. Most turtles don’t like the look of us and shoot off at great haste in the opposite direction. On occasion, though, some are either oblivious or indifferent to our presence and meander past serenely, nearly within arm’s reach. An awesome experience! We are treated to both juvenile green and hawksbill turtles, as St Joseph provides an important foraging ground for these youngsters. Juvenile hawksbills forage initially on floating vegetation, and as they grow, they use their famously sharp beaks to switch to a diet of marine invertebrates. Juvenile greens are generalists and eat an array of small aquatic creatures. As adults they become almost entirely herbivorous and feed predominantly on seagrass.

We will finish with a couple of our seabird favorites. We are almost always treated to the spectacular site of great and lesser frigatebirds soaring gracefully above us in vast quantities, eyeing unsuspecting fish in the water below. When the moment is right, they will dive effortlessly and swoop up their quarry from the sea surface. This moment of elegance is commonly followed by comical acts of piracy, as other birds repeatedly mob the successful hunter in an effort to lay claim to the spoils. If you watch closely – which we do – you can enjoy the times a fish falls out of the beak of one bird, only to be rapidly snapped up by one of the chasing pack! In addition to frigatebirds, there is also a flock of 20 to 30 crab plovers that we frequently spot on a small sandbar in the south-east corner of the atoll. These are beautiful black and white birds with long legs, complete with a charming and unmistakable sound that we think is best described as the sound of a dog’s squeaky toy. 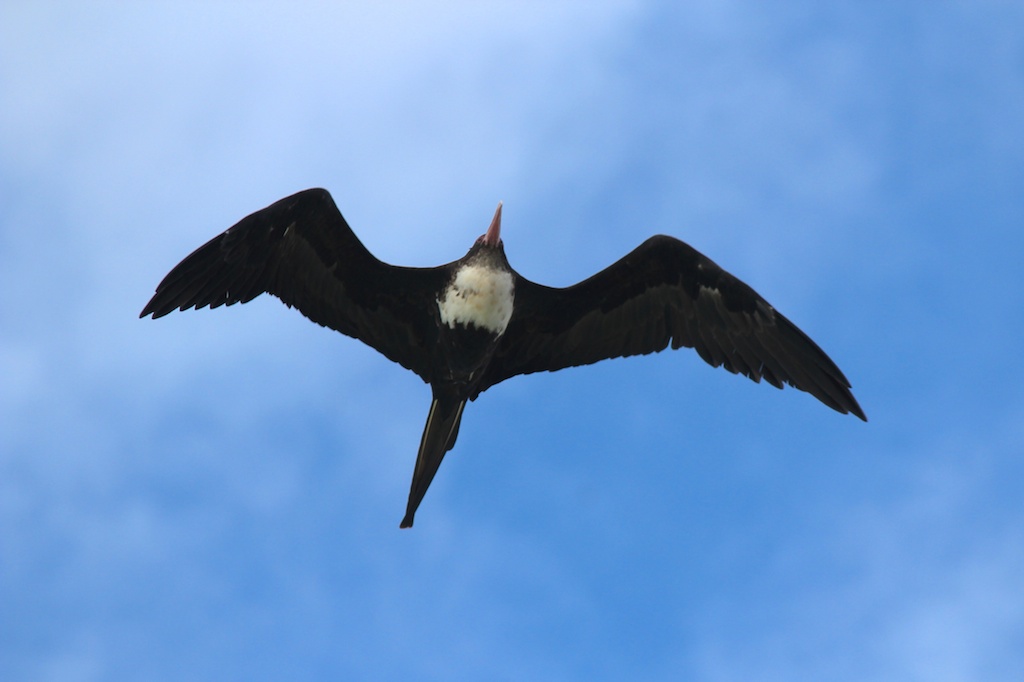