I tagged my first fish with an acoustic transmitter more than 10 years ago and since then have become addicted to the prospect of learning more not only about where and when fish move, but also about the drivers that make them move and adopt different behavioural strategies. This passion for studying fish movement behaviour has taken me around the world, participating in tagging projects from Atlantic salmon in northern Norway to giant potato groupers at remote atolls in the tropical Indian Ocean. To date, I have worked on more than 20 different species, addressing a range of research questions from residency patterns, home range size, habitat use patterns, connectivity and spawning aggregations to migrations and trans-boundary movements.

In 2007 I heard about the Ocean Tracking Network (OTN), a project developed by a group of Canadian researchers to establish an international network of acoustic telemetry arrays that would connect researchers around the planet and provide a platform for sharing metadata and detection data on tagged marine animals (see www.oceantrackingnetwork.org for more information). At that stage several other researchers and I had just started a project looking at the broad-scale movements of fishes tagged in Algoa Bay in the Eastern Cape, South Africa. I subsequently drafted a proposal to develop a South African node of the global OTN project, and in 2011 the South African Institute for Aquatic Biodiversity (SAIAB) signed a collaboration agreement with the OTN to deploy lines of acoustic receivers in Algoa Bay, Mossel Bay and False Bay, and later at additional sites around the south-eastern coast of southern Africa. The equipment on loan from the OTN comprised 120 receivers and acoustic releases, to which we added telemetry hardware obtained with capital equipment grants secured from the National Research Foundation.

The network of deployed receivers gave us unprecedented opportunities to study migrations and long-shore movements of acoustically tagged marine animals off southern Africa. This led to the establishment of the Acoustic Tracking Array Platform (ATAP) headquartered at SAIAB (www.saiab.ac.za/atap). The growth of this platform has been remarkable and to date it provides support to more than 30 researchers and students. The number of animals tagged with acoustic transmitters has also increased rapidly in recent years. Since the inception of the ATAP programme, more than 400 animals have been tagged, including elasmobranchs (white, ragged-tooth, thresher, Zambezi, tiger and seven-gill sharks and reef manta rays), teleost fishes (dusky kob, giant kingfish, green jobfish, leervis, potato bass, spotted grunter and white steenbras) and penguins. 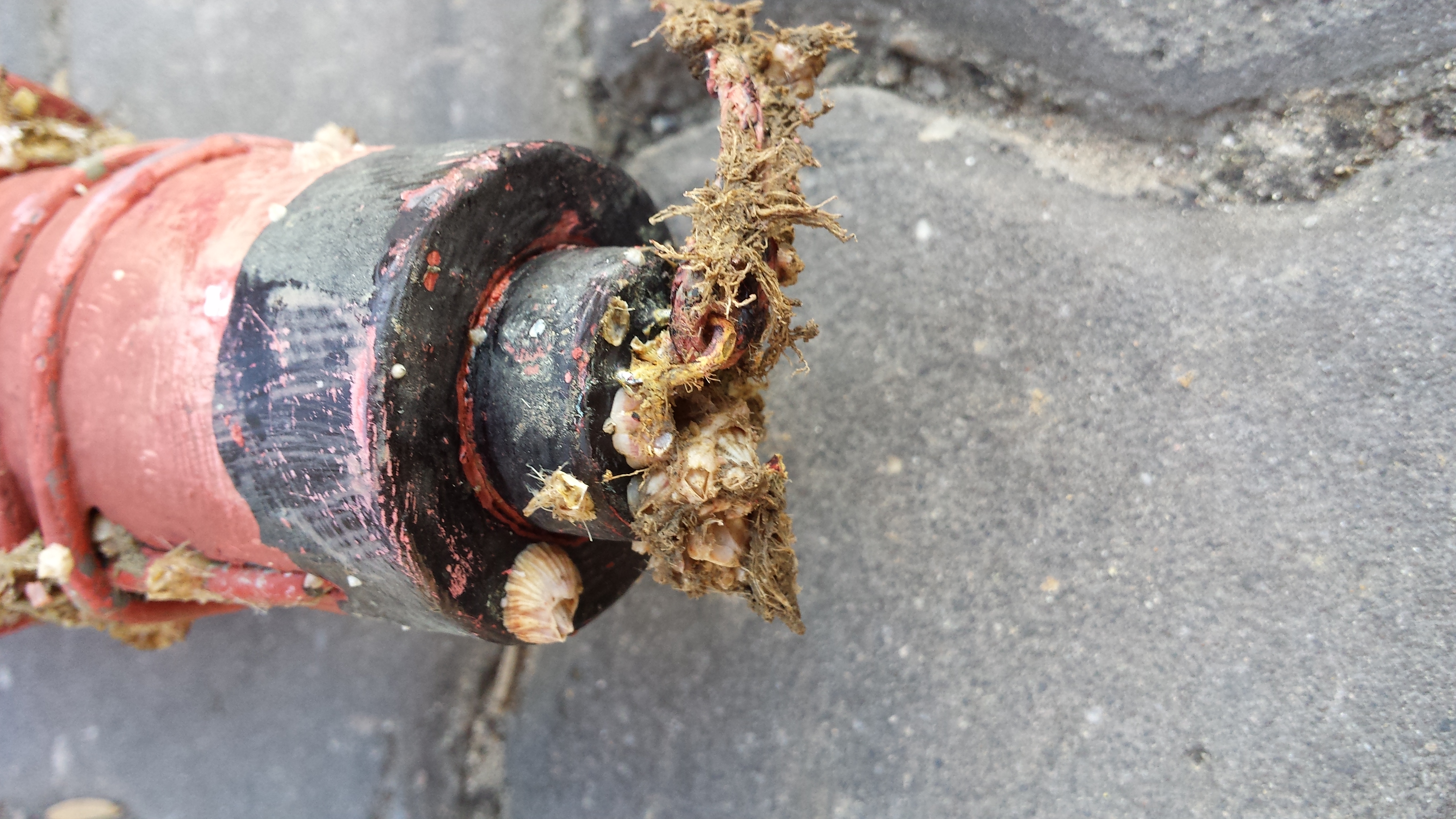 Photograph showing excessive biofouling around the release link wires, which retarded the ‘burn off’ process of the acoustic release. © Photo by: Paul Cowley

The growth and successes of the ATAP have not been without challenges. One of these has been to deal with biofouling. Often barnacles (or other fouling organisms) encrust the crucial ‘burn off’ region of the acoustic release mechanism, preventing the unit from making it back to the surface. On several heart-breaking occasions when deteriorating weather forced us to abandon the trip, we knew that the unit would break free from its mooring in our absence. Unfortunately, equipment losses are to be expected along an exposed South African coastline that is notorious for its rough seas and in estuaries that are vulnerable to periodic flooding. To date, the ATAP has made more than 275 receiver deployments on acoustic releases in the marine environment, of which a large majority have been successfully retrieved for downloading and servicing. However, to date 57 units (20%) have broken free from their moorings, of which 22 were retrieved after they had washed ashore; the remaining 35 units (13%) have never been found. The losses are extremely costly, both in terms of the equipment and the data logged on the receivers. Ongoing funding is crucial to the future success of the ATAP and we are indebted to the Save Our Seas Foundation and the African Coelacanth Ecosystem Programme for funds that enable us to maintain the platform.

Prospects for the next three-year phase of the ATAP look promising as the platform is well supported by a vibrant and enthusiastic research community that works together and shares data on tagged animals. The ATAP has proved to be a sustainable science platform, which ultimately provides cost savings at an individual project level due to its broad geographical coverage (from Cape Town to Ponta do Oura). I am confident that over the next few years many new discoveries will be made about the habits and migrations of tagged animals, and I look forward to reporting on these in future.