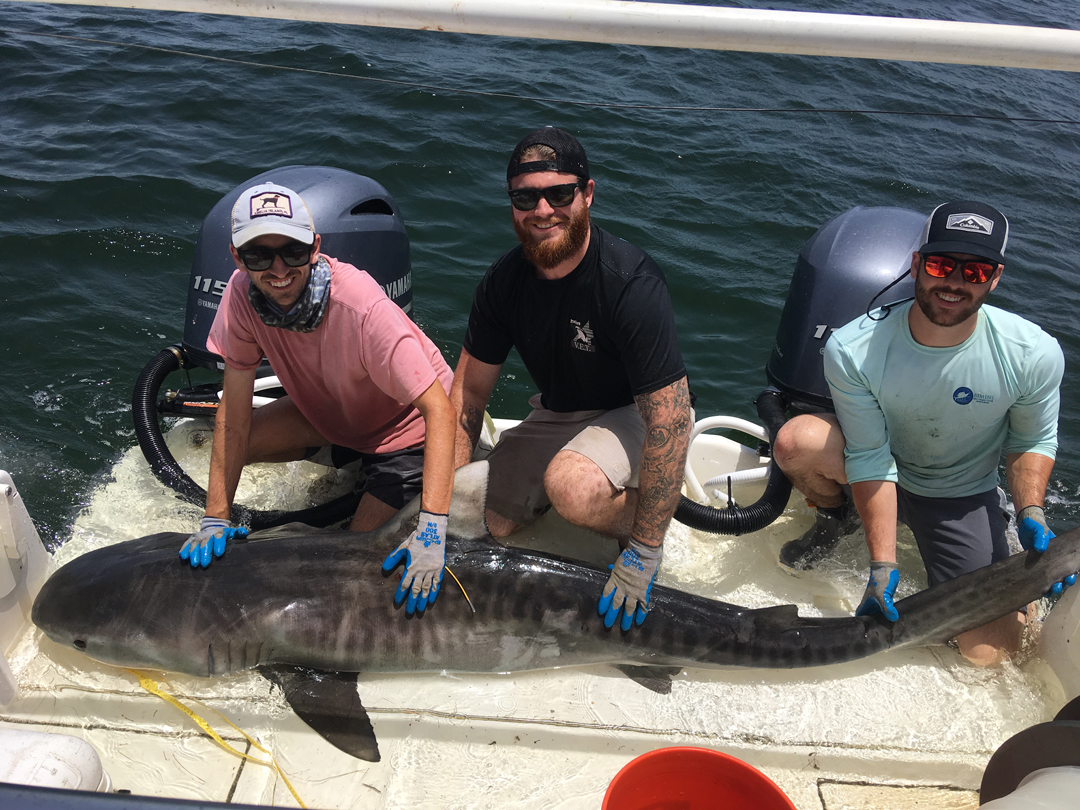 Cheston and some of his crew with a large tiger shark before release. Photo © Ashley Dawdy

A big part of my project depends on quantifying abundance and density of my focal species (bonnethead and bull sharks). This requires extensive fishery-independent gillnet and longline surveys in my study system of Apalachicola Bay, Florida. This year, we were able to complete 29 paired gillnet and longline survey sets throughout the bay – reaching my goal of 50 paired sets in total for this work (21 paired sets were conducted in 2018). 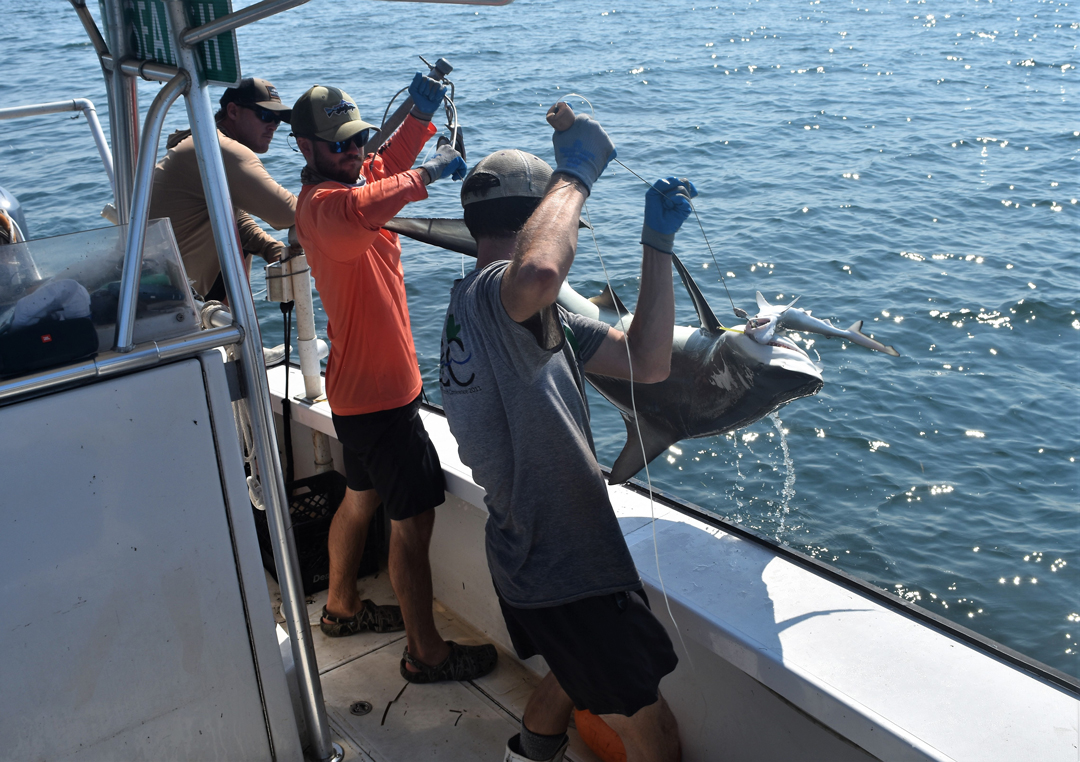 Cheston and his labmate Blake Hamilton bring an adult blacktip shark, captured after it tried to eat an already-hooked juvenile Atlantic sharpnose shark, aboard to be measured, sampled, and tagged. Photo © Maddie Mahood

Our surveys began in May this year and were conducted throughout the summer, though much of our fishing effort occurred in August. The fish communities of Apalachicola and neighbouring St. George Sound are diverse (we caught 9 species of sharks, 3 species of rays, and 20 species of bony fishes this summer), but the system is completely dominated by gafftopsail catfish (Bagre marinus). We caught over 800 gafftopsail catfish this summer! Our catches also include a range of small and large coastal shark species, as well as many estuarine fishes such as spotted sea trout (Cynoscion nebulosus). 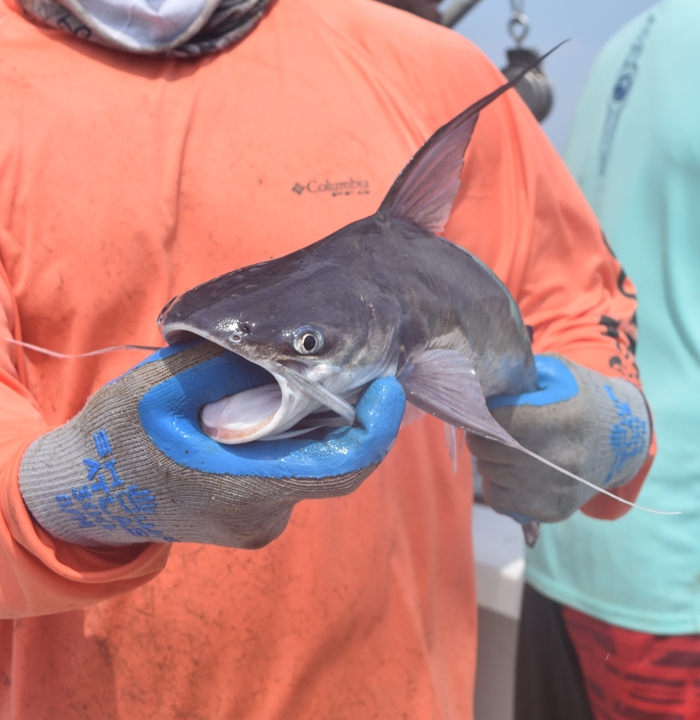 Gafftopsail catfish are an extremely abundant predator in estuarine systems of the Gulf of Mexico, such as Apalachicola Bay. Photo © Maddie Mahood

In addition to collecting valuable data, our surveys provide opportunities to tag our animals with acoustic transmitters. I’ll summarize our tagged animals in a future blog post, but we successfully tagged both bonnethead and bull sharks during our surveys this year. This is a huge bonus for us, as it saves on time and costs when we can deploy tags while conducting our surveys. It’s such a great feeling to deploy our transmitters! 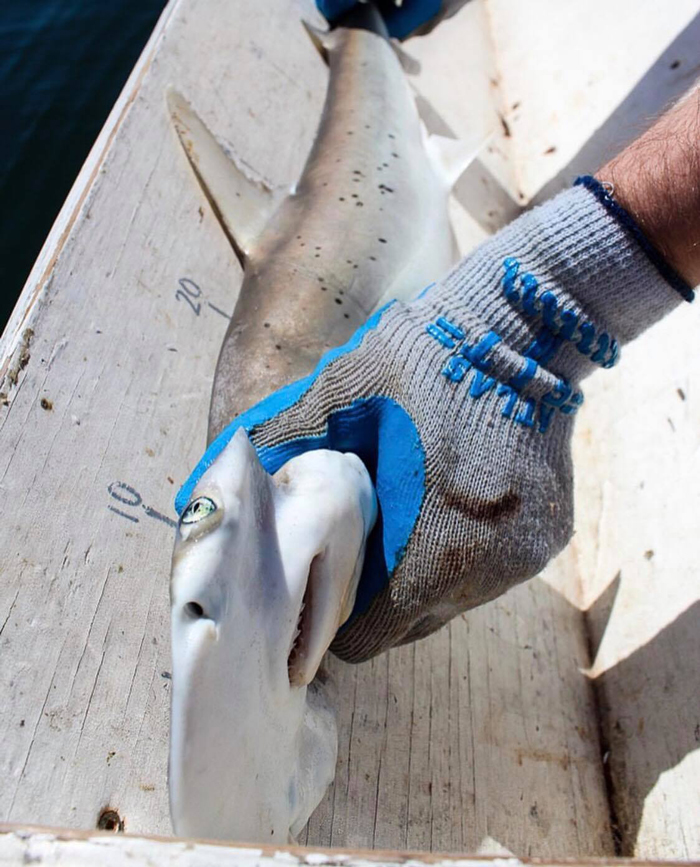 Our last survey day was one for the books: three sets conducted at our furthest sites from our base at the FSU Coastal and Marine Laboratory. We caught over 80 sharks, including an amazing 2.6-meter great hammerhead shark (Sphyrna mokarran), a juvenile lemon shark (Negaprion brevirostris), and a juvenile bull shark. We successfully implanted an acoustic transmitter in the bull shark, a fine cap to round out our day and this stage of my project. Stay tuned to hear about the sharks we successfully tagged this year! 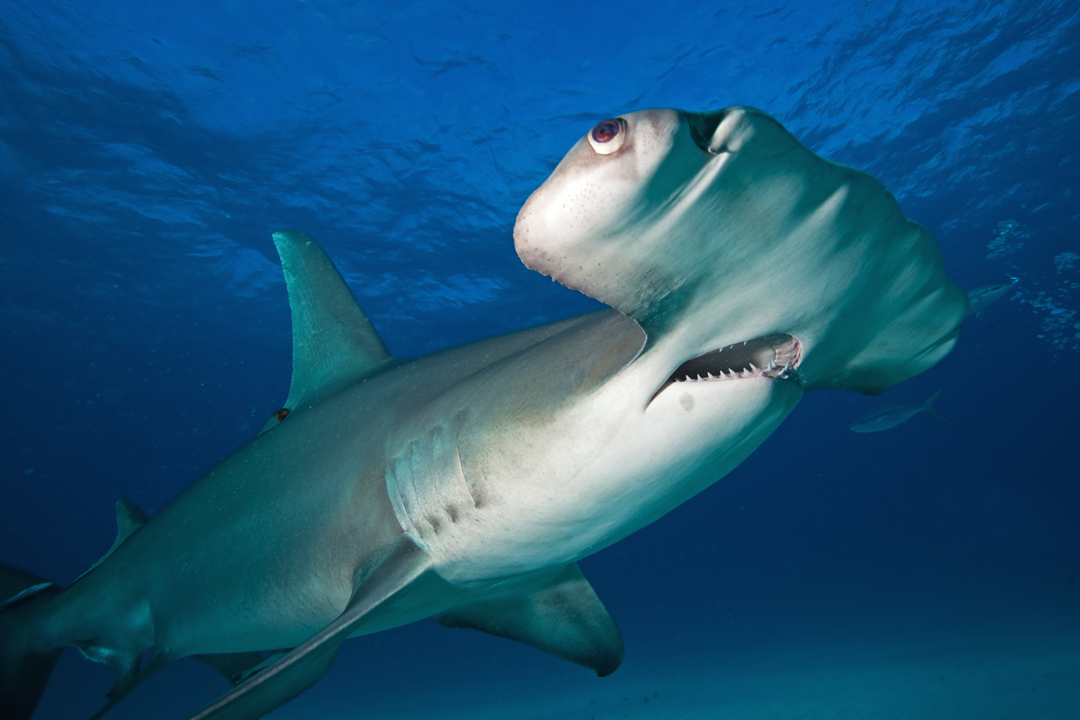