It was 7:30 am when we received a call from Eric Keen on his vessel The Bangarang. Eric is conducting a study on fin whales in the area and we work quite closely with him on our research. We were travelling back from Hartley Bay towards Whale Point when he alerted us that a juvenile transient orca had just beached herself on the shore of Andrew Rocks. From his description it sounded like her family had been cooperating as a team hunting for seals. She had positioned herself near the rocks waiting, almost motionlessly, while her family chased a seal in her direction. It must have been a miscalculation on her part because as the tide went out, she found herself stuck and unable to move. Without a second to think, we turned our boat The Sophia around and travelled north in Squally Channel to where Eric was. En route we called the Gitga’at Guardians of Hartley Bay and tried to establish contact with Fisheries and Oceans Canada (DFO) to alert them. By the time we all arrived, the tide was already dropping. Our worst fear was coming true: this young whale was going to be on the beach for at least eight more hours until the tide rose later in the day. Her family was in the distance, watching helplessly. They would circle the island, very close to shore where she was stranded. They could probably hear her vocalising, each call trembling through her entire body – and our hearts – as we listened close by. We had never encountered a stranded whale before. Luckily we were able to establish contact with John Ford and Paul Cottrell of DFO and ask for their guidance over satellite phone. They both had experience with this type of situation and they advised us to keep her cool and wet throughout the day without causing her too much stress. So, with her family close by but unable to help, we stepped up to take on the role of her protectors. 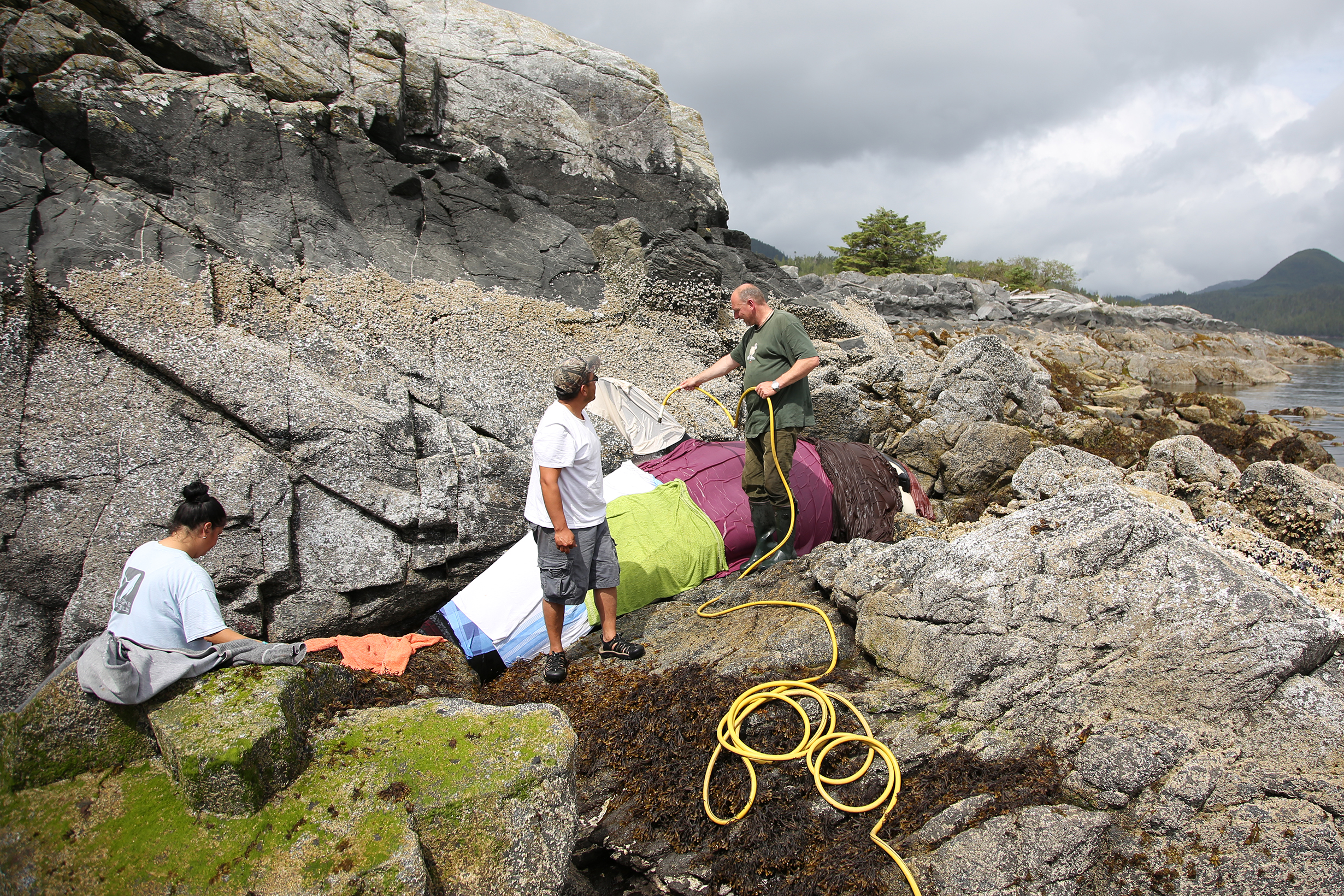 Hermann, alongside Marven and George of the Gitga’at Guardians from Hartley Bay, went ashore to assess the situation with a few empty buckets and sheets. By the time they returned, Eric had brilliantly put together a MacGyver-style water pump with a hose and some duct tape. We grabbed a hand-held radio, some water and food; we knew we would be beside this whale all day. Bunker and Nicole from Hartley Bay picked up Eric and me, and we made our way to the backside of the island with the pump, quietly walking to where Hermann was standing with the orca. Eric worked the water pump while Hermann took the hose and began to slowly soak her body with water from the sea. The rest of us alternated soaking sheets in the intertidal area, passing them to Bunker who then gently lay these along the length of her body. We noticed that her dorsal was getting very dry, so grabbed a pillowcase from Eric’s sailboat as a cover. We worked in shifts to keep her wet using the water pump and blankets soaked in the ocean. Fortunately, for most of the morning it was quite cloudy, but by midday, the hot sun had come through the clouds and was shining directly on the orca. Until this point we had not covered her head with sheets, as we did not want to cause her more stress. However, the time had now come for the need to shield her entire body from the sun. I have never seen Bunker move so slowly as he inched into the water in front of her and delicately placed a second sheet over her head, ensuring that her blowhole was left uncovered. If ever any of her skin was exposed, it quickly dried. This made us realise how fortunate this young whale was that Eric had found her; if he hadn’t, she would be sitting alone on this rock, suffering to a much greater extent under the heat of the sun. 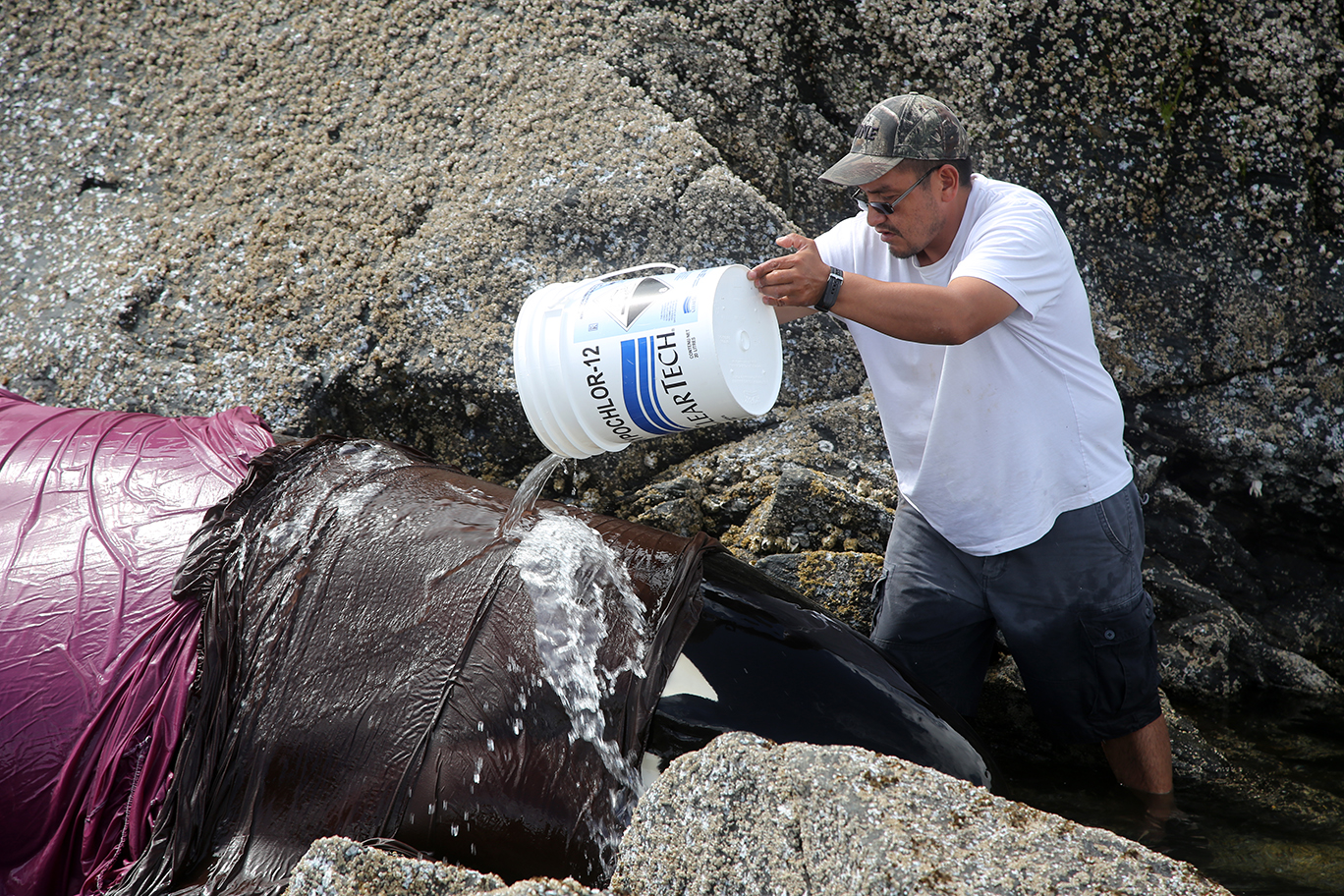 For the first while, we could tell that she was quite anxious about having these humans so close to her. Imagine what it might feel like for a creature of the sea, spending her days swimming with freedom of movement in all directions, then suddenly not being able to move at all, completely helpless to gravity and the weight of her body against the rock beneath her. When she took a breath you could tell she struggled from the pressure on her lungs. Had she been a full-grown male orca, she may not have lived until the next high tide. Fortunately she was young and actually quite small for her age. At nine years old, she likely weighed around 7,000 pounds. A full-grown male can weigh up to 16,000 pounds. With time and our efforts to keep her calm, her breathing became steady. Every once in a while she would become vocal, then quiet again. It was when her eyes finally closed, that she seemed to relax. We all stood still, looking at each other in awe, wondering the same thought: had she somehow realised we were here to help her? We all hoped that was the truth and carried on in silence. In the intervening hours we did our best to keep her as cool and as comfortable as possible. Just as the tide began to rise, the water pump finally broke and all the duct tape in the world couldn’t keep it together. So with bins and buckets, we continued as an assembly line. One of us would fill the bucket and pass it down to the next person to pour water on the sheets that covered her sensitive skin. Finally, the water level rose enough to reach her body. We knew it was time for us to leave, as our presence might cause her to try and move prematurely, causing more harm in the process. We removed all the sheets and blankets from her body and stepped away. One last time we stood next to her wishing her all the strength in the world to get off the rocks and be free. We climbed up onto a nearby cliff and waited, watching as the water level slowly began to cover her body. She became more and more vocal, perhaps excited, knowing her moment of freedom was soon to come. It was her patience that astonished us. She would lift her tail, as if to check the level of the tide. At one point we were concerned that something might be wrong, but we realised we should trust her instinct to know the right time. Sure enough, once again she tried to lift her tail. She must have realised the right time had come and with two giant thrusts she was suddenly off the rock, and with lightening speed, she was swimming free. From the rock and the boats nearby you could hear us all screaming with joy, ‘You Go Girl!’ Eric had placed a hydrophone in the water and we could hear her vocalising over and over, searching for a response from her family. They had travelled off into the distance and we could not see them. Another wave of relief washed over us all as we heard the faint calls from her concerned family. She had obviously heard them as well and was off, swimming as free as every whale should be, to reunite with her family. We now know that this whale is T069A2 and belongs to the T69 family, a group that we are very familiar with. 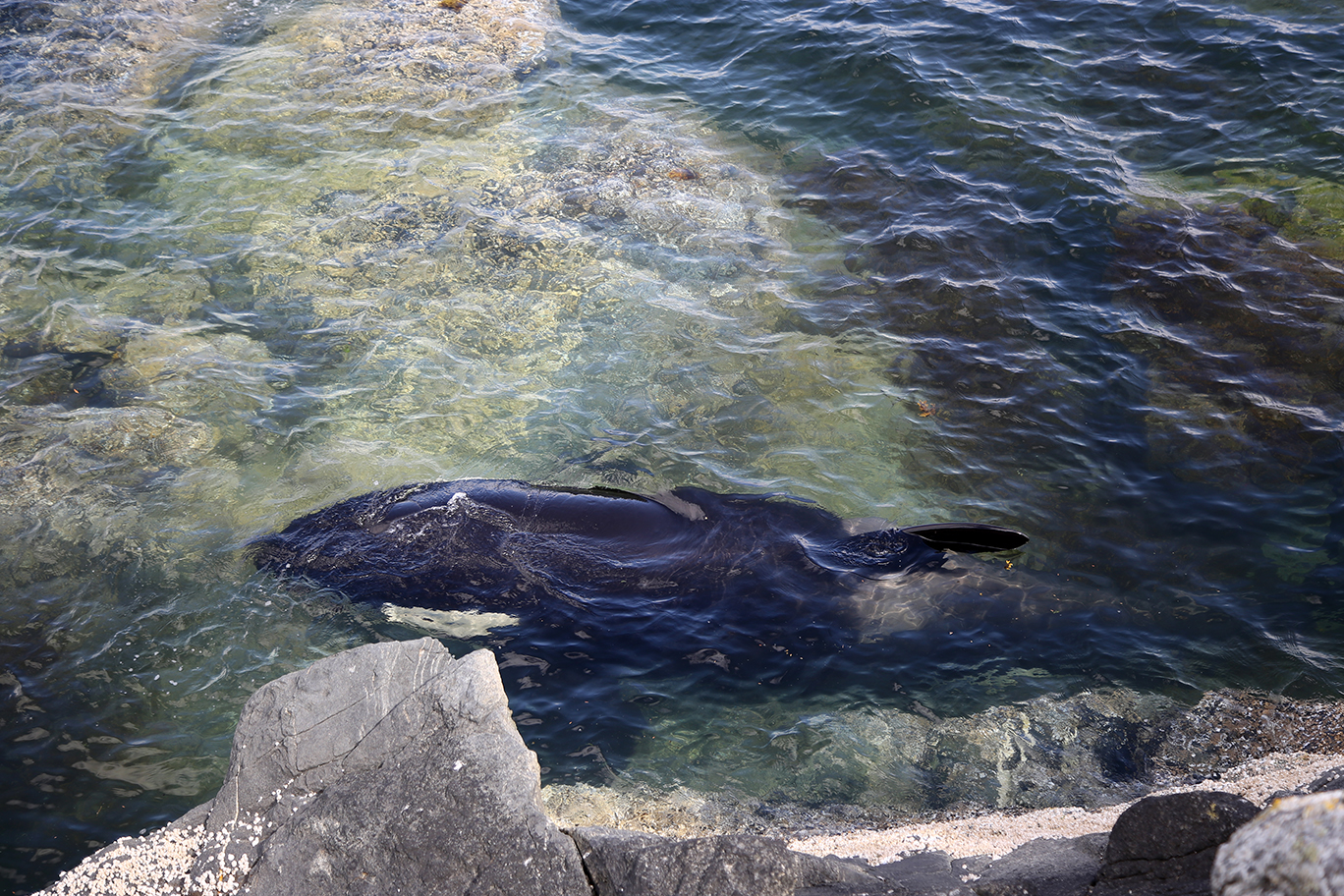 We all stood side-by-side as a community and let the emotions of the day move through us with one unified sigh of relief. We felt overwhelmed and proud that we had all worked together so effortlessly to save this whale. We also realised something else: this whale had beached herself not far from where the Enbridge tankers and liquefied natural gas (LNG) ships are proposed to transit oil and gas. Would days such as this become commonplace with humpbacks, fin whales and orca at constant risk to ship strikes? There are many days when we have observed all three species sharing this narrow channel for the purpose of foraging. Blows can be seen from one end of the channel to the other, leaving no space for such a large vessel to pass.

In the days since the incident, the outpouring of media and public interest in the rescue has astounded us. It gives us encouragement and renewed hope that when united we really do have the power to protect this remarkable coast.

Between ourselves at Cetacea Lab, the Gitga’at Guardians of Hartley Bay, Eric and his crew on The Bangarang, and researchers from DFO, we will let you know the next time this young whale is sighted and how she is doing. For now, I think we should all be grateful she has survived and hope for her safety in the years to come.