There’s a good reason manatees are also known as Sea Cows. They’re often seen feeding in seagrass beds or along the banks of rivers, much as cows graze meadows on land. The Florida manatee, the most studied species, is believed to be a strict herbivore (although there have been occasional observations of them eating marine invertebrates). But during my nine years of work with African manatees, in almost every country I’ve visited, I’ve repeatedly heard stories from local people that manatees steal fish from nets, and that they eat clams and mollusks, both freshwater and marine varieties. At first I was surprised, because I thought African manatees would be just like their Florida cousins, but I heard these reports so often from people in countries thousands of miles apart, that I decided I had to investigate. African manatees are very hard to observe in the wild due to their shy nature and the murky water habitats they live in, so I decided to research their diet using a technique known as stable isotope analysis. The name sounds intimidating, but the concept of stable isotopes is really quite simple: every plant and animal has a unique carbon and nitrogen signature, which differs for lots of reasons including the attributes of environment they live in (rainfall, water quality, soil quality, pollution, etc.) and many other factors. By collecting samples of everything we think an organism eats from each habitat they live in, these signatures can be used to determine what makes up an animal’s diet.
In my case, I collected plant, fish, and mollusk samples throughout manatee habitats in Senegal and Gabon, as well as bone samples from manatees from the same areas, to determine their average lifetime diets in the different habitats in which they lived. I was also able to sample manatee bones collected 70 years ago from a museum collection, so that I could compare manatee diet in the past to samples collected recently. Then I took all the samples to the laboratory, processed them to get their stable isotope values, input those values into an analysis program, and got some exciting results. African manatees sampled from both Gabon and Senegal, and both freshwater and marine systems, regularly ate mollusks and fish as part of their diets. For Gabon manatees living in lagoons and rivers in the Central African rainforest, the model estimated their diet was 90% plants and 10% invertebrates (fish were not sampled from Gabon). In the Senegal River, for manatees living in a desert environment at the edge of the Sahara, plants composed 46 – 57% of diet. The remaining diet proportions were composed of mollusks (19 – 24%) and fish (24 – 27%). Manatees living along Senegal’s coast indicated a diet of 48% clams and 51% seagrass. So for manatees in Senegal, approximately 50% of their diets were not plants! For a species considered an herbivore, this is pretty big news. There was no significant difference between historical and recent manatee samples for either the Senegal River or the coast, and although sample sizes were small, this indicates that sampled manatees had similar diets throughout life, and that diet proportions have not changed significantly over the past 70 years.
So why is this important? The results of this study give us accurate information about the food resources manatees utilize over time in the different habitats they live in. This can help resource managers prioritize specific places where food resources are abundant for conservation purposes. This new information also increases the list of species we need to monitor as important food sources for manatees. For example, now that we know manatees in Senegal depend upon mollusks and fish, we need to try to resolve conflicts with fishermen and help to conserve not just the plants, but all the species manatees depend upon. This is the first dietary analysis study for the African manatee and I look forward to publishing the results in the scientific literature soon, and continuing my studies of manatee diet in other countries. 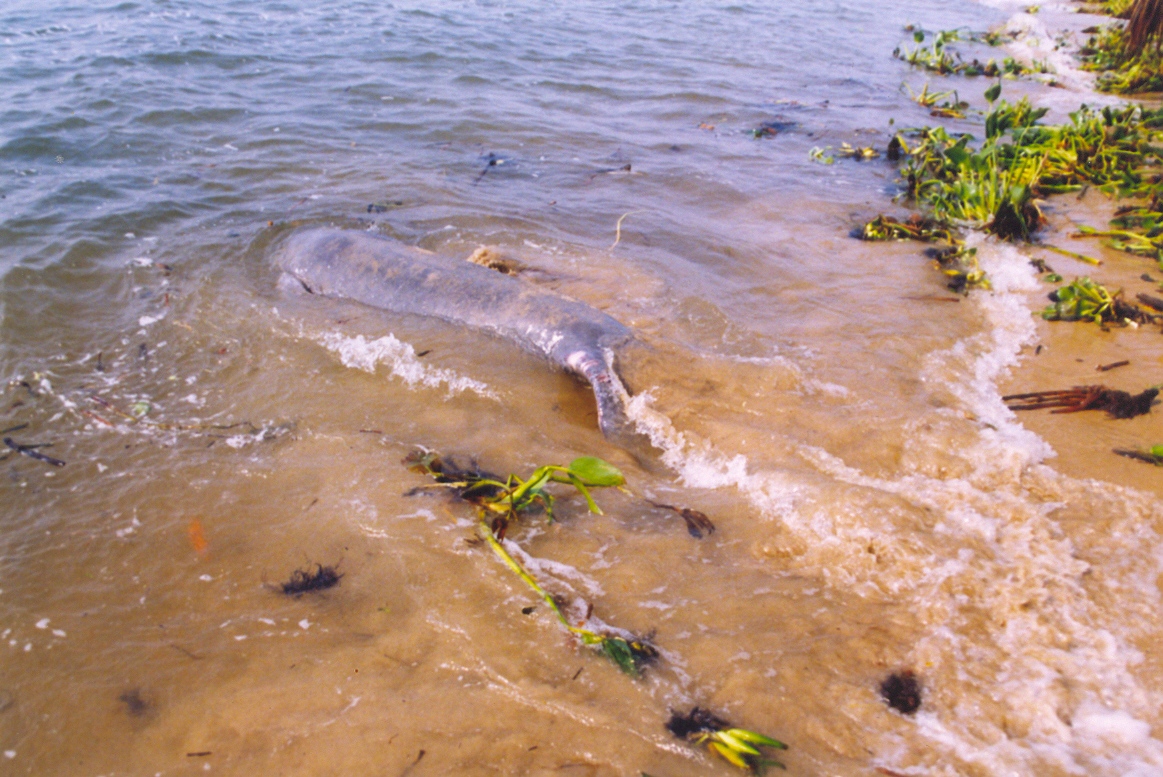 A feeding manatee flees from the photographer in Angola. Because observational studies on African manatees are extremely difficult, stable isotope research gives us valuable information about the feeding ecology of the species that we otherwise wouldn’t be able to obtain. Photo courtesy of Miguel Morais.