Academy by the Sea enters its second year!

The second year of the Academy by the Sea Level 1 programme has come to a close and a further 24 secondary school students are now equipped with lots of knowledge about Seychelles marine life. The Academy, based at the Dive Seychelles Underwater Centre at the Berjaya Hotel in Beau Vallon on Mahe, was a fun filled adventure with snorkelling, games and other activities. Students spent two weeks of their school holidays learning about the coastal habitats around the Seychelles, the animals that live within them and the threats that they face. 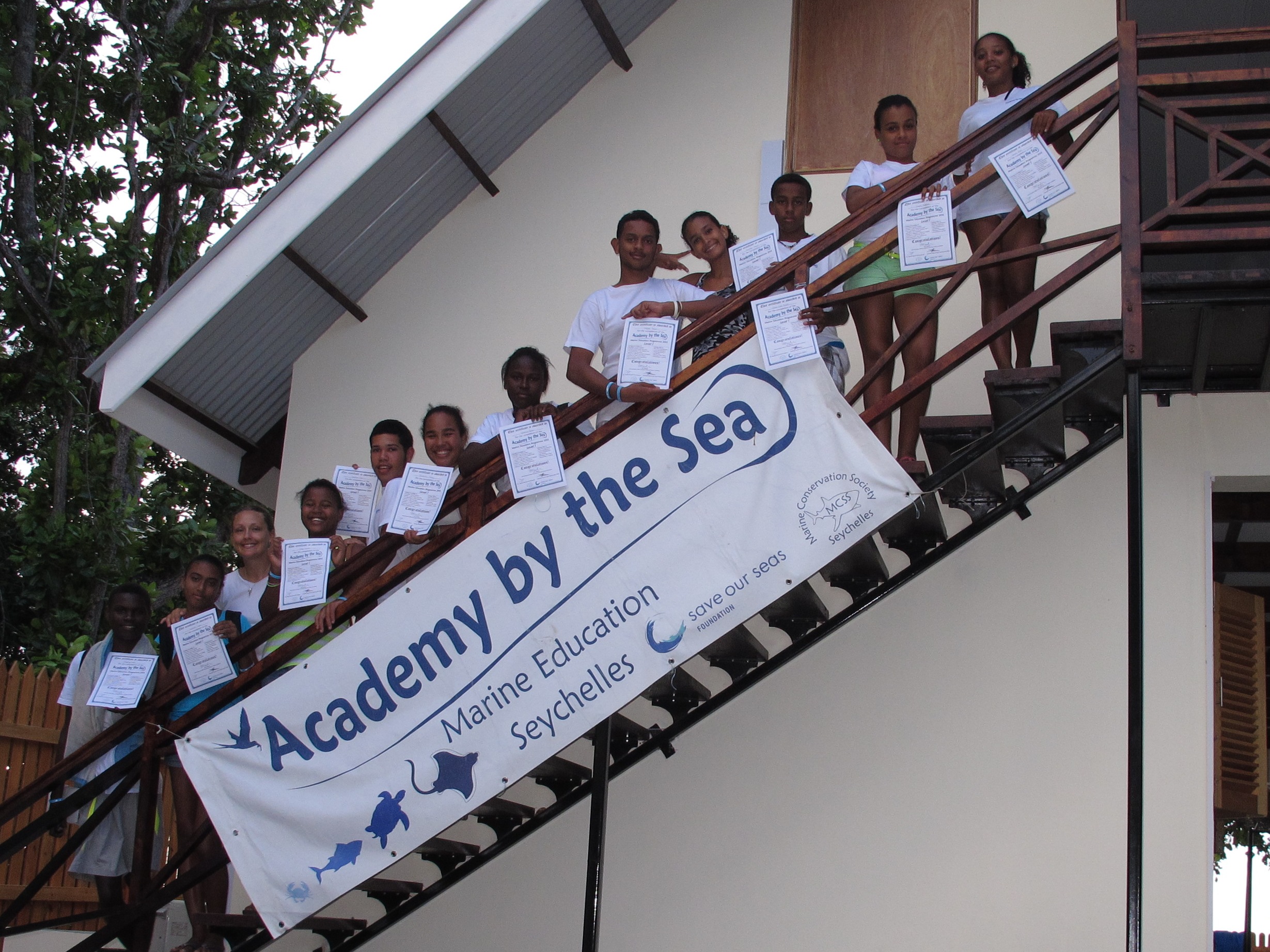 The S4-S5 students with their certificates

Laura Montano is a student at the Independent School on Mahé and joined the first group. On her first day, not only did she celebrate her 14th birthday but she also learnt how to snorkel! This was one of the many new things Laura learnt whilst at the Academy; she describes her experiences below: 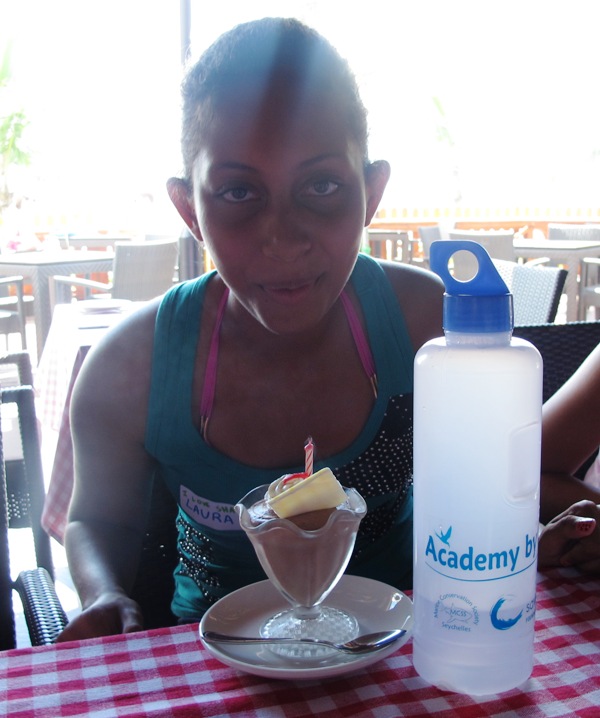 The Academy by the Sea has been a wonderful experience. I’ve learnt so many new things, experienced new places and made many new friends. It was the best birthday present ever!!  I learnt how to snorkel on the first day, it was really easy! Our main snorkeling location was near Fisherman’s Cove Hotel where we saw many colourful juvenile fish like butterfly fish, parrotfish and angel fish who’s names we learnt in class. Unfortunately we didn’t see Harry the hawksbill turtle. We went to Baie Ternay three times and snorkeled in the cold water… it was freezing, but worth it as I saw a hawksbill turtle, a squid and a ray up close (things I don’t see everywhere). It was magnificent!! We also explored the mangroves at Cap Ternay with Global Vision International (GVI). They taught us how to do one of their mangrove surveys, interesting indeed 🙂 The wonderful people were very welcoming and they even cleaned up my spaghetti which had slipped out of my plate somehow 🙂 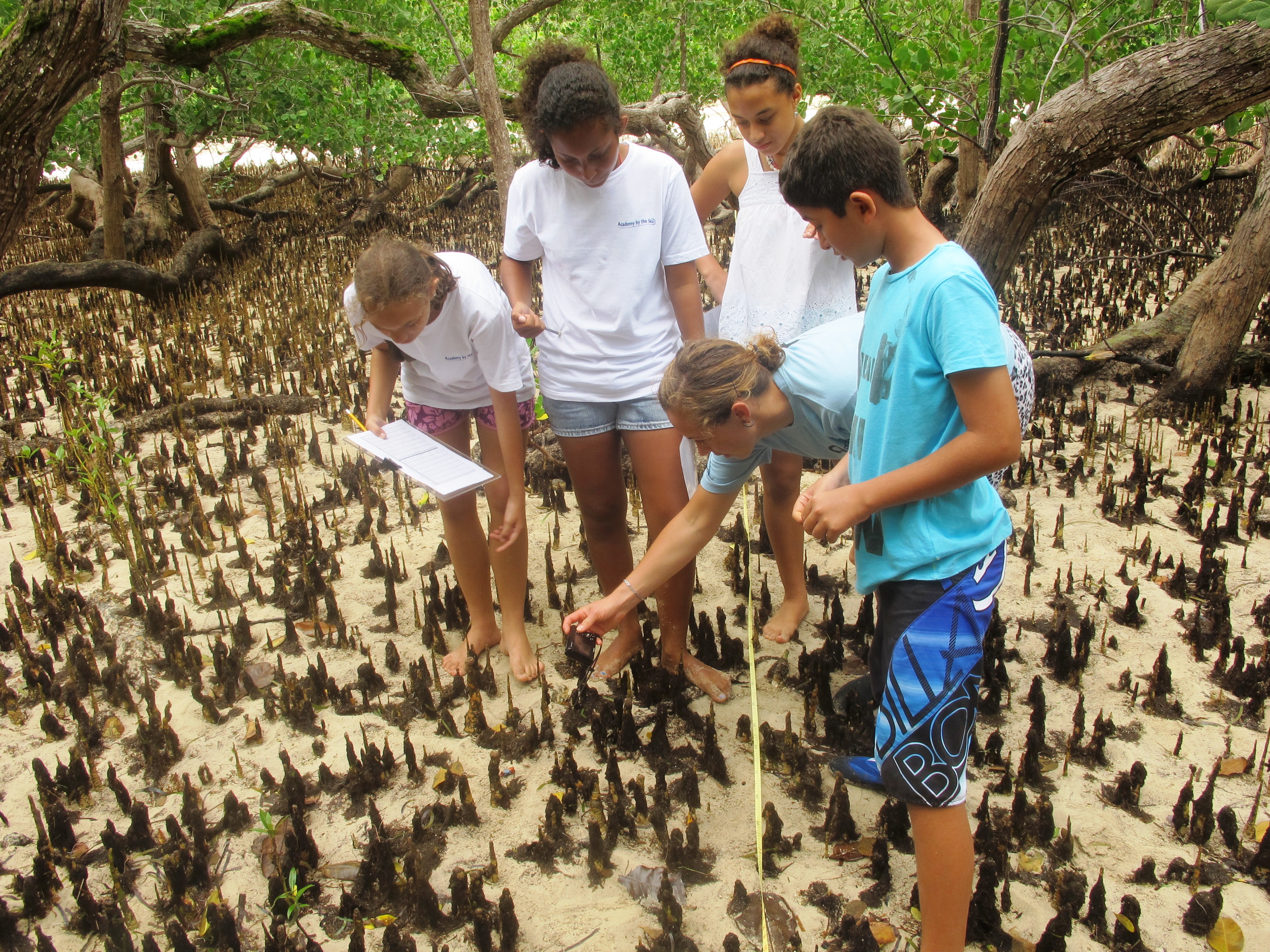 Laura and her fellow students exploring the mangroves with GVI

On the fifth day of the Academy, we visited the Banyan Tree Hotel where we saw moorhens and grey herons. I was surprised to learn that very little of the wetland had been destroyed although it was surrounded by development. The snacks were as satisfying as the wonderful scenery (yummy!!). We also learnt about sea turtles and did a role play on the beach. I was a hawksbill turtle (such hard work). I had to dig and dig with my feet and also walk like one :S (hawksbill turtles crawl up the beach using their front flippers alternately, green turtles use their front flippers at the same time –that would’ve been even harder work!). On the same day we saw a humpback whale which had been washed up on the shore of a deserted beach. We were all very excited even though sadly it was dead. It had been partially eaten by the sharks and we saw watched some sharks feeding on it. It smelled horrible (luckily my nose was partly blocked!). 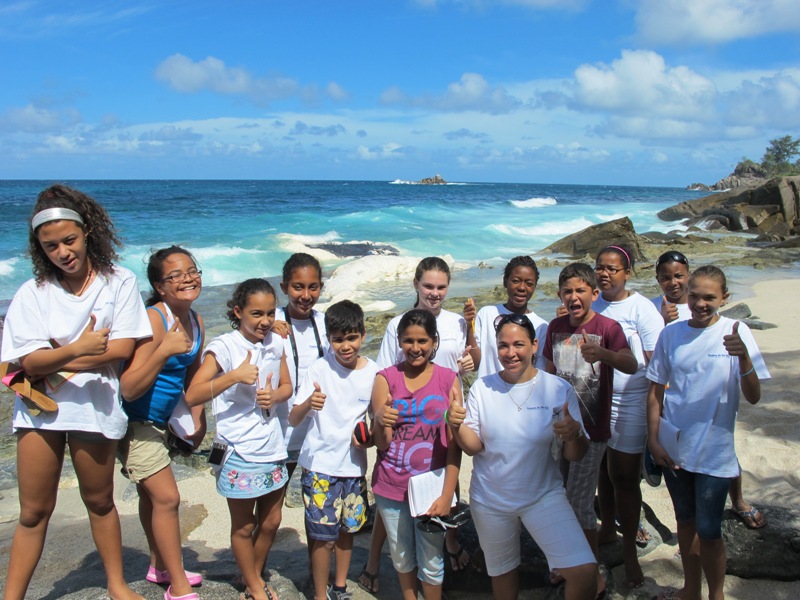 We also did many other group activities like making a movie about sharks and doing a presentation on sharks to the rest of the group. We also did games like the ‘ball game’, ‘who am I?’ and quizzes. We learnt many more interesting facts like the types of corals and fish in both classes and visits. If I could repeat these 2 weeks all over again, I wouldn’t think twice about my decision for they were spent worthwhile 🙂 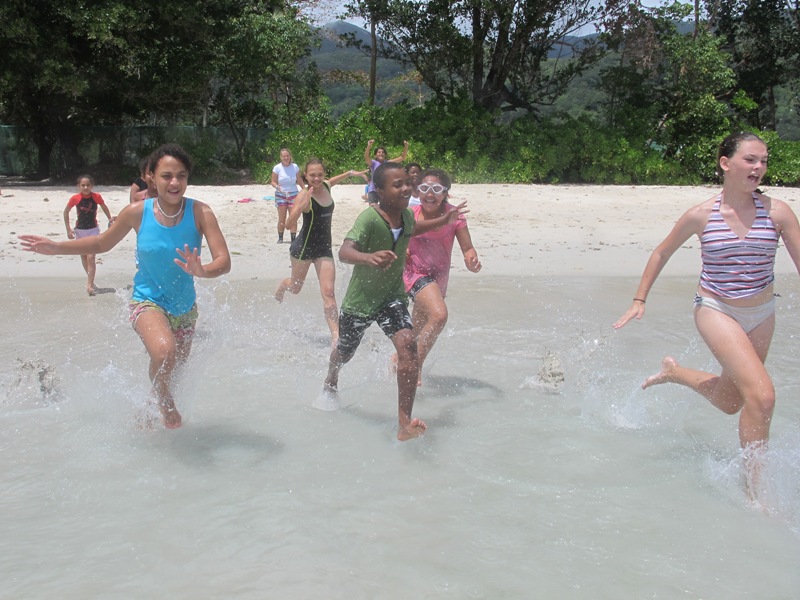 Once again it was fantastic to see the students’ expand their knowledge over the programme. One of the things they spent a lot of time learning about were sharks. As well as receiving a presentation about sharks they also worked in groups to give presentations to the rest of their class about them. All the students really enjoyed exploring facts about this magnificent animal and over the two weeks, most of the students’ negative opinions about sharks were turned to positive. In addition to this they produced short movies about sharks on the theme of the Save Our Seas Foundation ‘Rethink the Shark’ campaign. Visit the ‘Academy by the Sea, Seychelles’ Facebook page to watch these videos and see more images from the last four weeks. 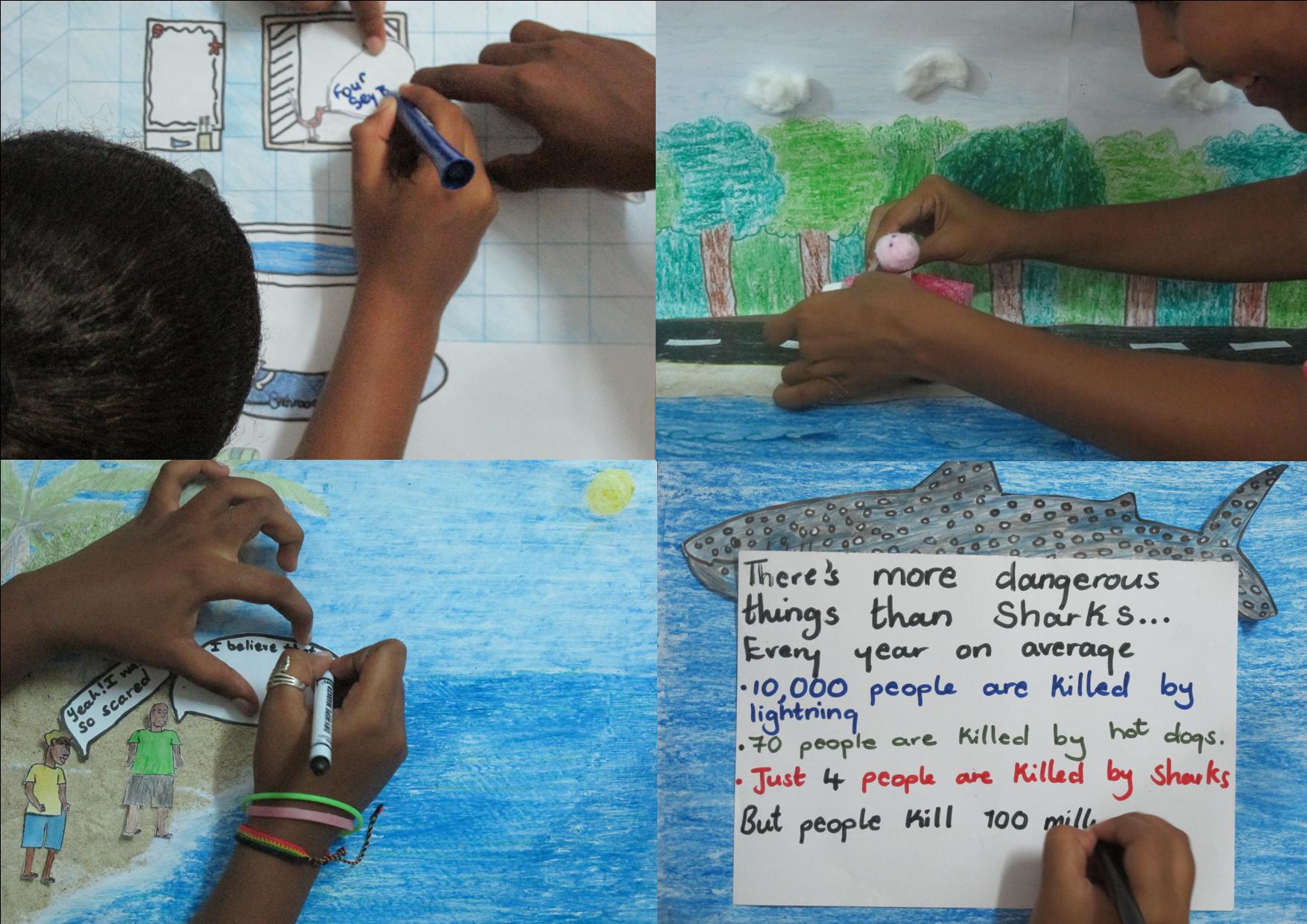 The shark movies in production!

Big thanks to MCSS and Dive Seychelles Underwater Centre staff for their assistance with snorkelling, to GVI for hosting us at Cap Ternay and the Banyan Tree Hotel for accommodating our visit to the wetlands and a huge thank you to York University student Holly Wetherall for the excellent videos on the Seychelles habitats and for assisting in the first Academy group. Thank you also to the 24 students who participated, we look forward to you joining us on future Academy activities. 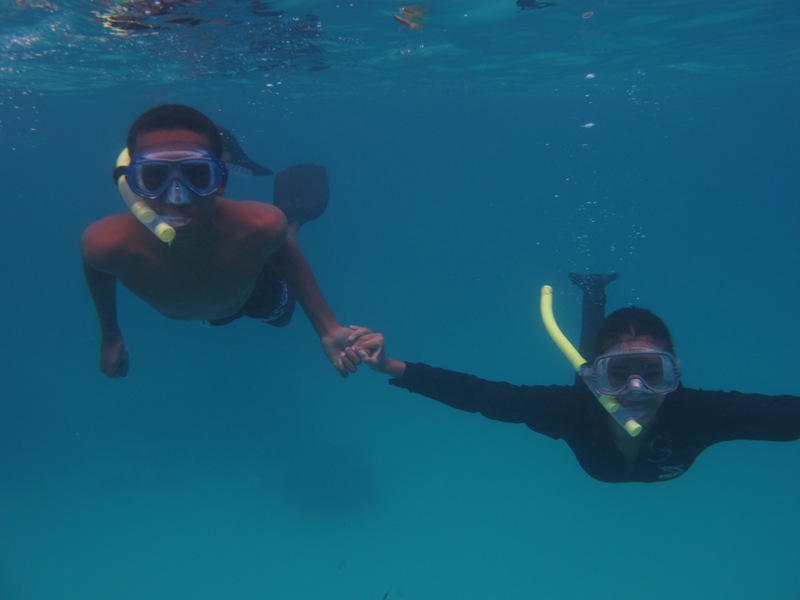 Jean-Luke and Mickela snorkelling in the marine park