© Photo Save Our Seas Foundation
By Erin Dillon, 4th March 2016

Dermal denticles are the tooth-like scales that cover a shark’s skin. Studying dermal denticles that have been preserved in the recent fossil record is a completely new branch of shark science and is important for conservation. The denticles can tell us a lot about the habitat and behaviour of the sharks they came from, and with the aid of our reference collection of denticles we can work out which shark family they belong to. Then, by looking at the denticle’s physical traits, we can glean useful information about the function of that particular denticle as well as the lifestyle of the shark it belongs to. It’s a bit like a game of ‘Guess Who’.
To give you a better idea, let’s take a closer look at denticles from four sharks that you’ll probably recognise. 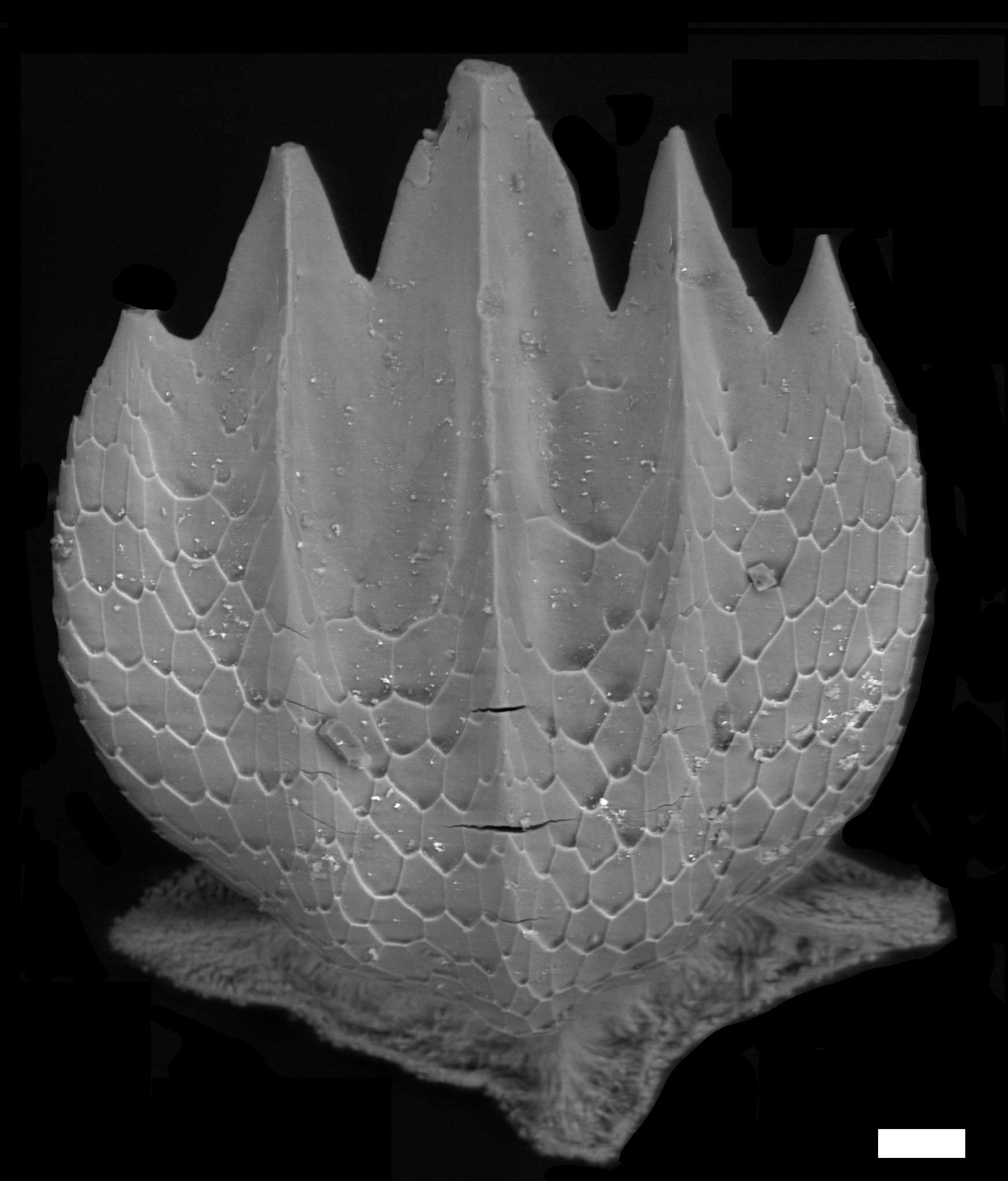 Take a look at this ornate denticle. How does its appearance reflect the life habits of its owner? First, consider the great hammerhead’s speed. Although it can be difficult to measure swimming speed, we do know that hammerheads are among the fastest of sharks. Their speed enables them to catch an assortment of prey that ranges from fish to crustaceans and other sharks – talk about an apex predator! Hammerheads are also known to migrate over long distances. It would therefore be useful for them to conserve energy by reducing some of the drag on their bodies as they slice through the water – and this is exactly what their denticles do.
• The parallel ridges running the length of the denticle crown (the top part of the denticle) end in serrated peaks that help to channel water around the shark’s body.
• The low height of the ridges and the thin spacing between them are ideal for disrupting the boundary layer between the skin and the surrounding water, reducing turbulence. In fact, the ridge dimensions of hammerhead denticles are very close to those projected for optimal burst swimming speeds. As the shark grows and sheds its denticles, the slightly larger replacements maintain the same ridge spacing but have more ridges to cover the additional surface area.
• The tiny honeycomb pattern is thought to play a hydrodynamic role at a finer scale. This ornamentation, which is barely visible without a scanning electron microscope, is also found on denticles in other shark families, but typically covers much less of the crown’s surface.
• The denticles of hammerhead sharks have evolved to be smaller and thinner, overlapping to provide a hydrodynamic coating rather than heavy armour. This reflects the sharks’ pelagic lifestyle and position higher up in the water column. 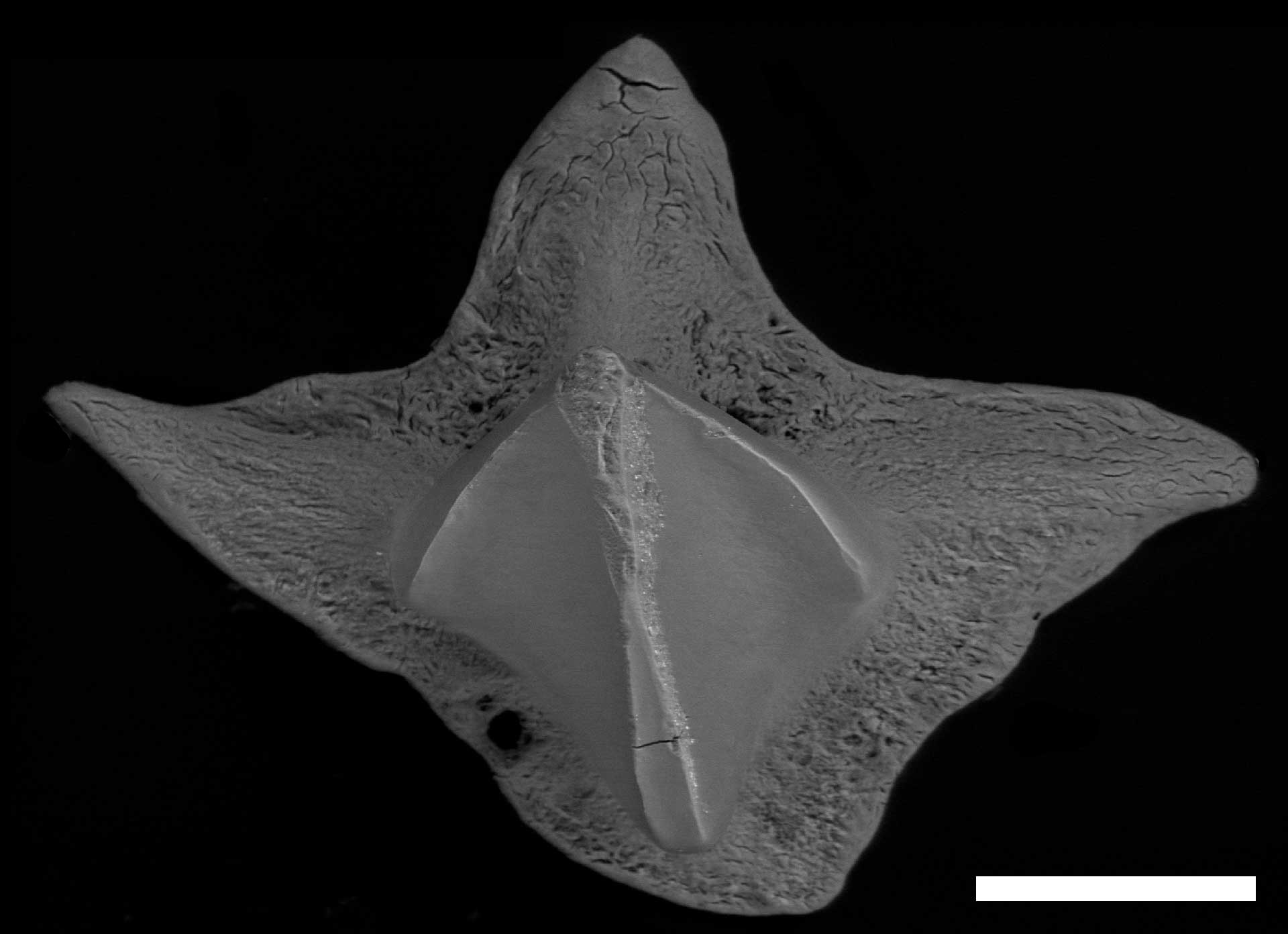 The tiger shark differs from other sharks in that it tends to live in close association with the sea floor. Its denticles are very different from those of other members of the Carcharhinidae family and may be designed for defence rather than fast swimming.

• The denticles are thicker and have upward-pointing crowns. The upward angle of the crown would theoretically increase drag as the shark swims. This is counterintuitive, suggesting that the denticles may have a purpose other than hydrodynamics.
• The diverging and widely spaced ridges on the denticles have also been shown to be less hydrodynamic.
• The thick crown may protect the shark from getting scratched when it enters shallow water.
• It may help prevent parasites and other organisms, such as barnacles and algae, from settling on the shark’s body. 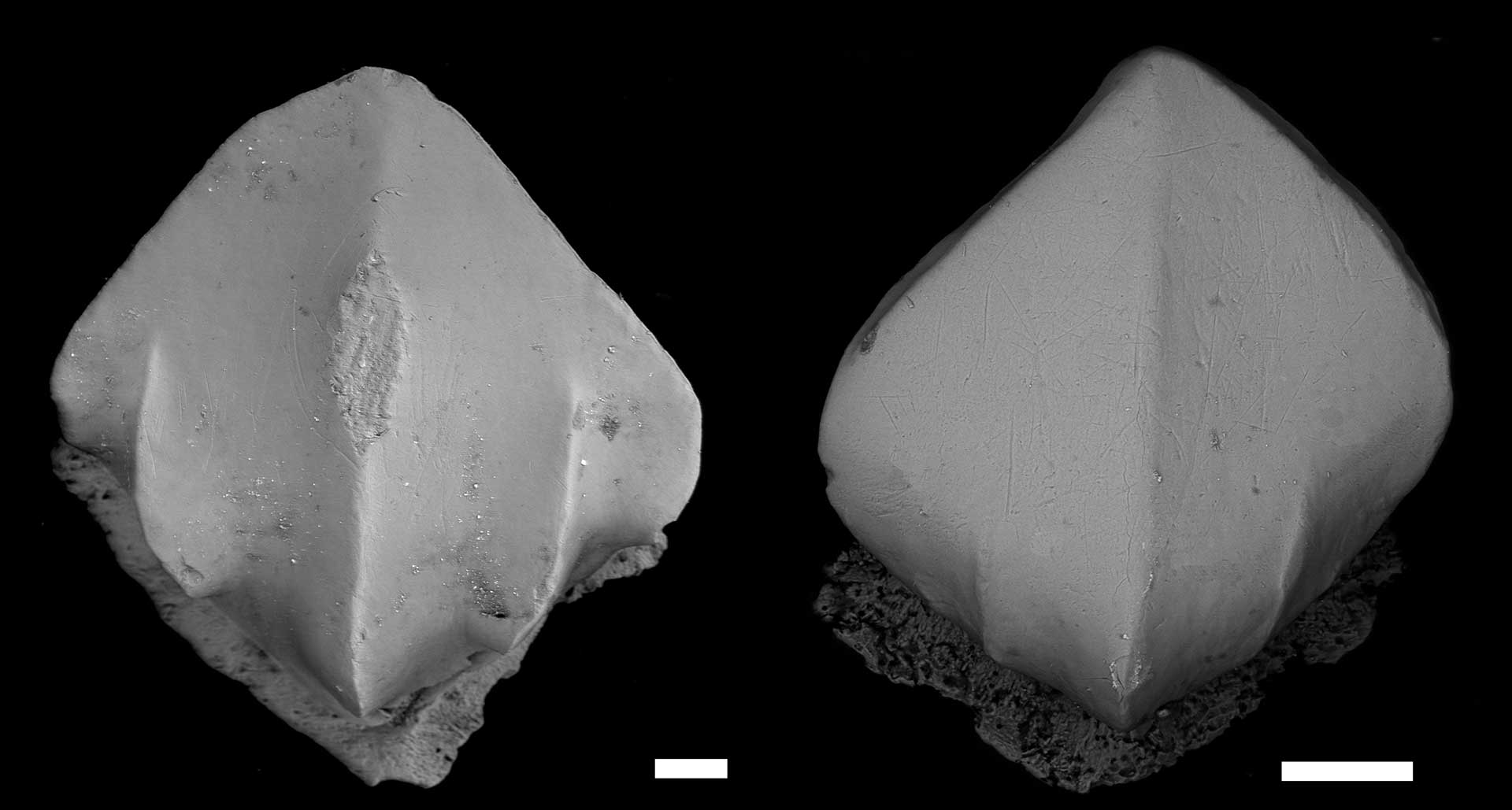 At night, nurse sharks prey on crustaceans and molluscs on the sea floor as well as fish and squid. They prowl along the rocky and coralline surface of reefs, using their hard, leathery hide to protect them from being scratched. This durable outer coating also makes it difficult for either predators or humans to eat them. Their distinctive dermal denticles are an important part of their body armour.
• Nurse shark denticles are typically thick and diamond-shaped with a single peak and are positioned side-by-side along the skin of the shark to form thick armour. Many may appear worn or scratched due to abrasions, as demonstrated in the denticles illustrated.
• Some denticles lack ridges altogether, whereas others possess large, widely spaced and incomplete ridges that may slightly improve the denticles’ hydrodynamic properties.
• The ridge spacing is significantly wider than that observed for other reef-associated shark families, reflecting the nurse shark’s slow swimming speed and helping us to identify the denticles. 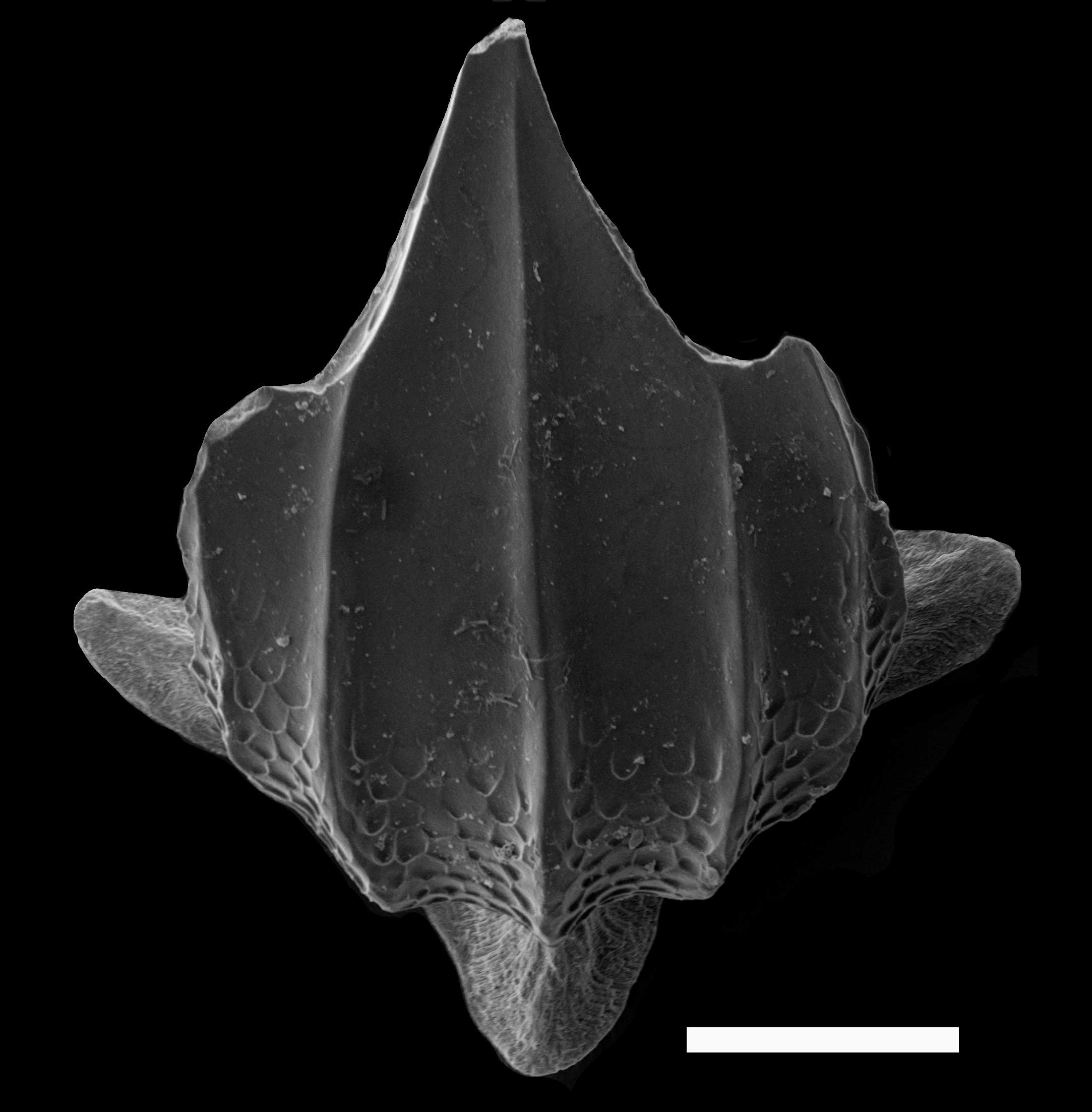 In some of Wolf-Ernst Reif’s seminal work investigating denticle function and evolution, the family Scyliorhinidae was documented to have ‘generalised function’ denticles, characterised by a well-developed central peak that is much longer than the adjacent peaks. This type of denticle is thought to be ancestral rather than adapted to serve any specific function. It also occurs on almost all sharks, albeit in varying numbers and on different parts of the body. On the chain catshark, this type of denticle takes precedence, covering most of the body and fins.
• The denticle’s complete, parallel ridges and fine microstructures may make it more hydrodynamic.
• The slightly upward-pointing angle of the central peak and medium thickness may help to protect the shark, given its demersal lifestyle.
• In previous studies, the denticles of mature female catsharks, specifically the lesser-spotted catshark, have been found to be longer and wider than those of mature males in certain areas, possibly providing additional protection from biting during mating.