August in Belize: calm seas, hot days, and breezy nights. And night sharks. They’re here every year, just off the south tip of Glover’s Reef Atoll. And they’re huge. This is what I’ve been hearing since we first started exploring the deep-water fisheries and sharks in Belize. Like most fisher reports, I took this with a grain of salt. As the reports kept coming, and from other colleagues and different fishers, I knew this was a lead that needed to be followed.

Night sharks Carcharhinus signatus, live up to their somewhat mysterious name, as they are rarely encountered in the northwest Atlantic. Called Cuban night sharks locally, they used to be commonly captured in the Cuban artisanal shark fishery, but numbers have dwindled in the last few decades and they are now considered rare in the greater Caribbean and are listed as Vulnerable globally by the IUCN. We do know that in the southwestern Atlantic Ocean they grow fairly slowly, mature at about 10 years of age, produce 4–15 pups every other year (presumed), and that they tend to occupy deep depths during the day, and migrate to shallower waters at night. What we don’t know is, well, quite a lot, especially in the northwestern Atlantic Ocean. 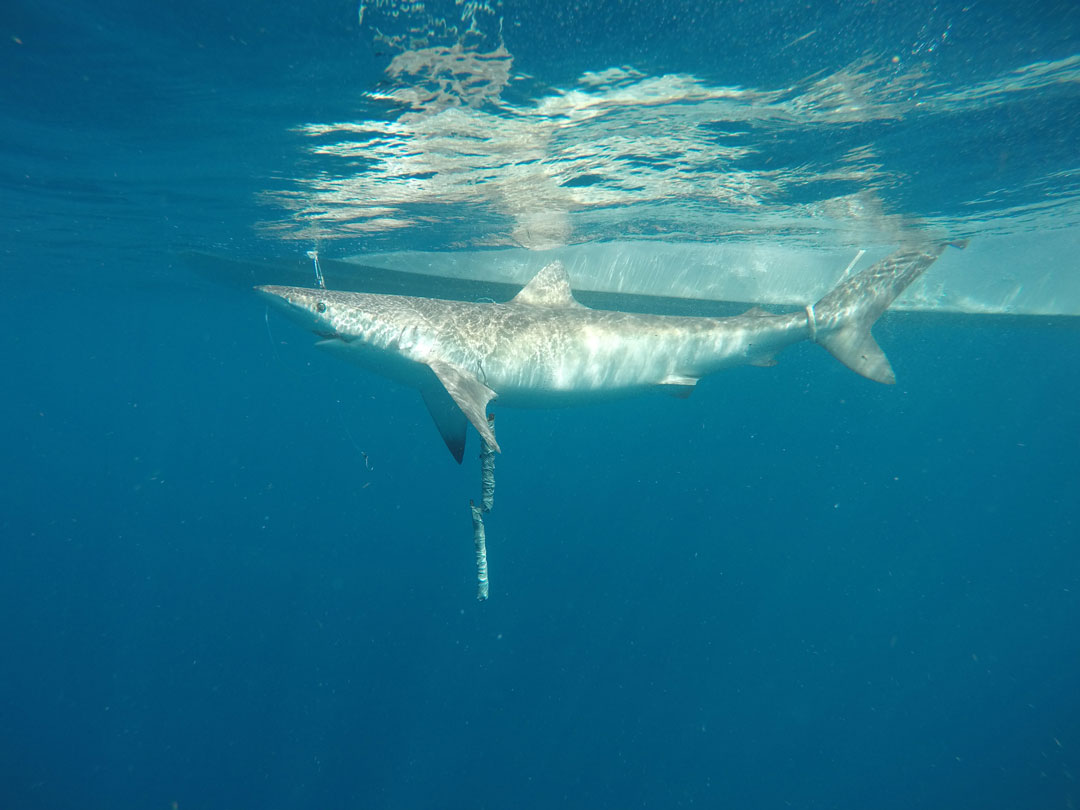 Needless to say, I’ve been itching to get out to Glover’s to tag night sharks for quite some time. The fates finally aligned this year and we assembled a small, but experienced crew to make the 120 km trek from San Pedro via boat mid-August. But those calm, August seas were nowhere to be found; instead the forecast called for a stiff 15-25 kt wind all week. Thankfully our accommodations weren’t too bad. 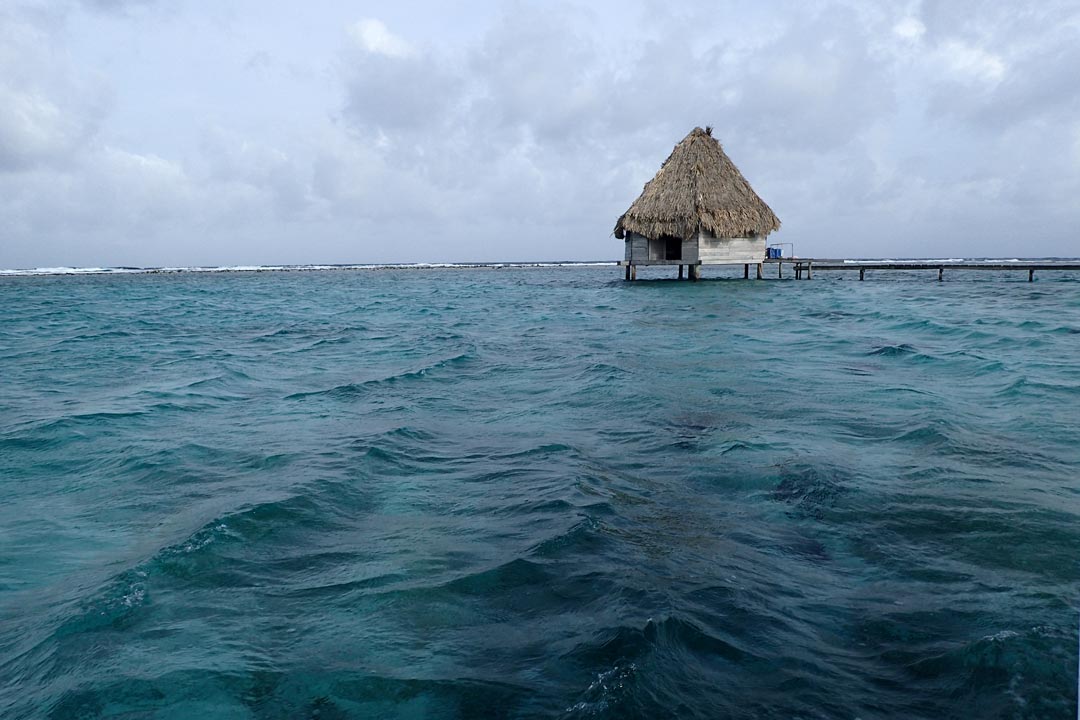 Our shared cabana for the week. Photo © Ivy Baremore

Forced by the wind to work on the west wall on the first day, we set twelve lines, but were skunked. A lucky shift overnight had us on the fabled south point the next morning: we set out our first three vertical lines at around 250 m with a range of hook sizes. As we were waiting out the 30 minute soak time, our captain, Dan, suddenly exclaimed, “shark!” and pointed at the first buoy. We raced over to pull the line as the buoy did a characteristic sharp tug which nearly took it underwater. When the crew began to haul in the line, and we realized that 1) there was definitely a large animal on the line and 2) it was on the smallest hook size with a light monofilament leader.

Amazingly, about five minutes later we had a large mature male night shark at the side of the boat. We managed to secure it with a tail rope just before it relieved itself of the hook, and the next few minutes were spent pacifying the 204 cm animal. Fun fact: night sharks don’t like being touched! 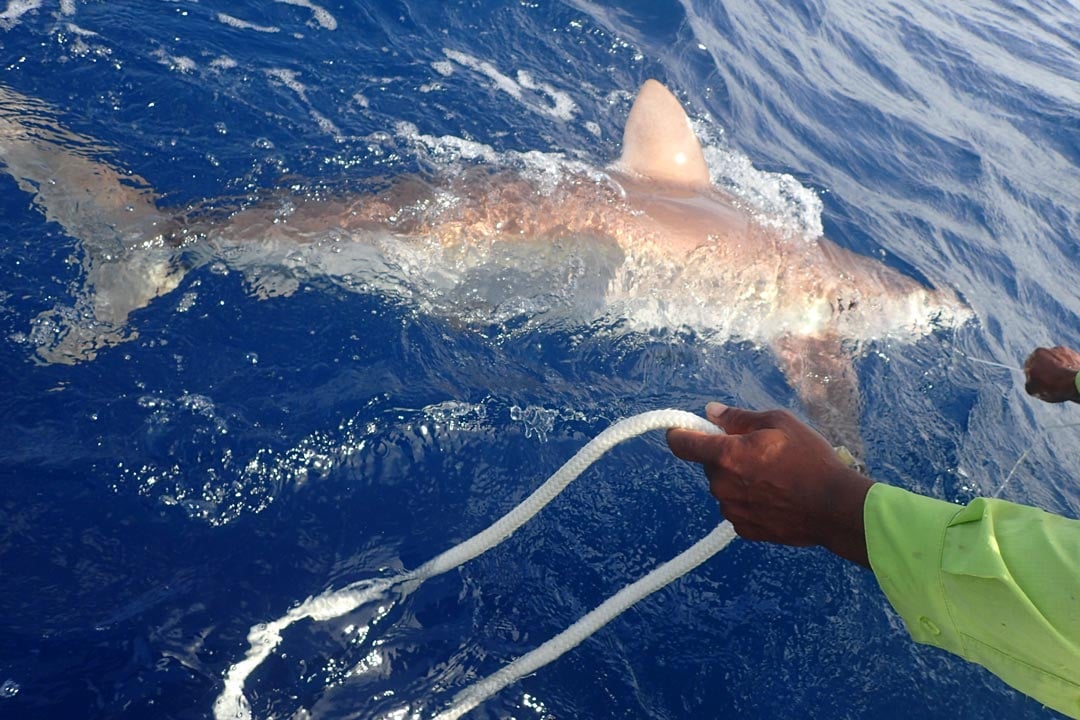 A male, 204 cm TL night shark at the surface on the line. Photo © Ivy Baremore

Fortunately, Dan has 12 years of experience handling large sharks as part of the MarAlliance team. Once secured, we took measurements, a fin clip sample for genetics, tagged him and released our first night shark back to the depths. 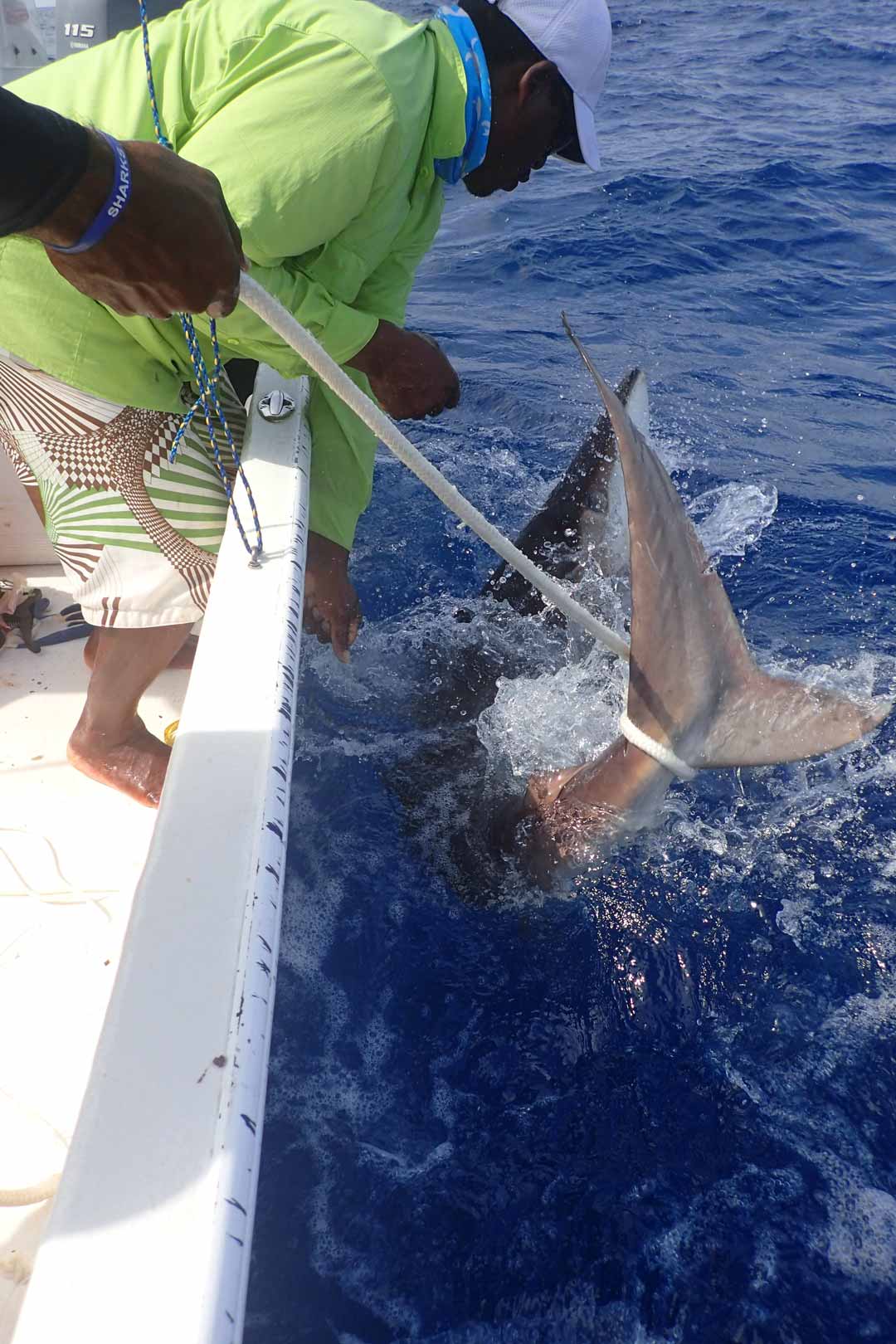 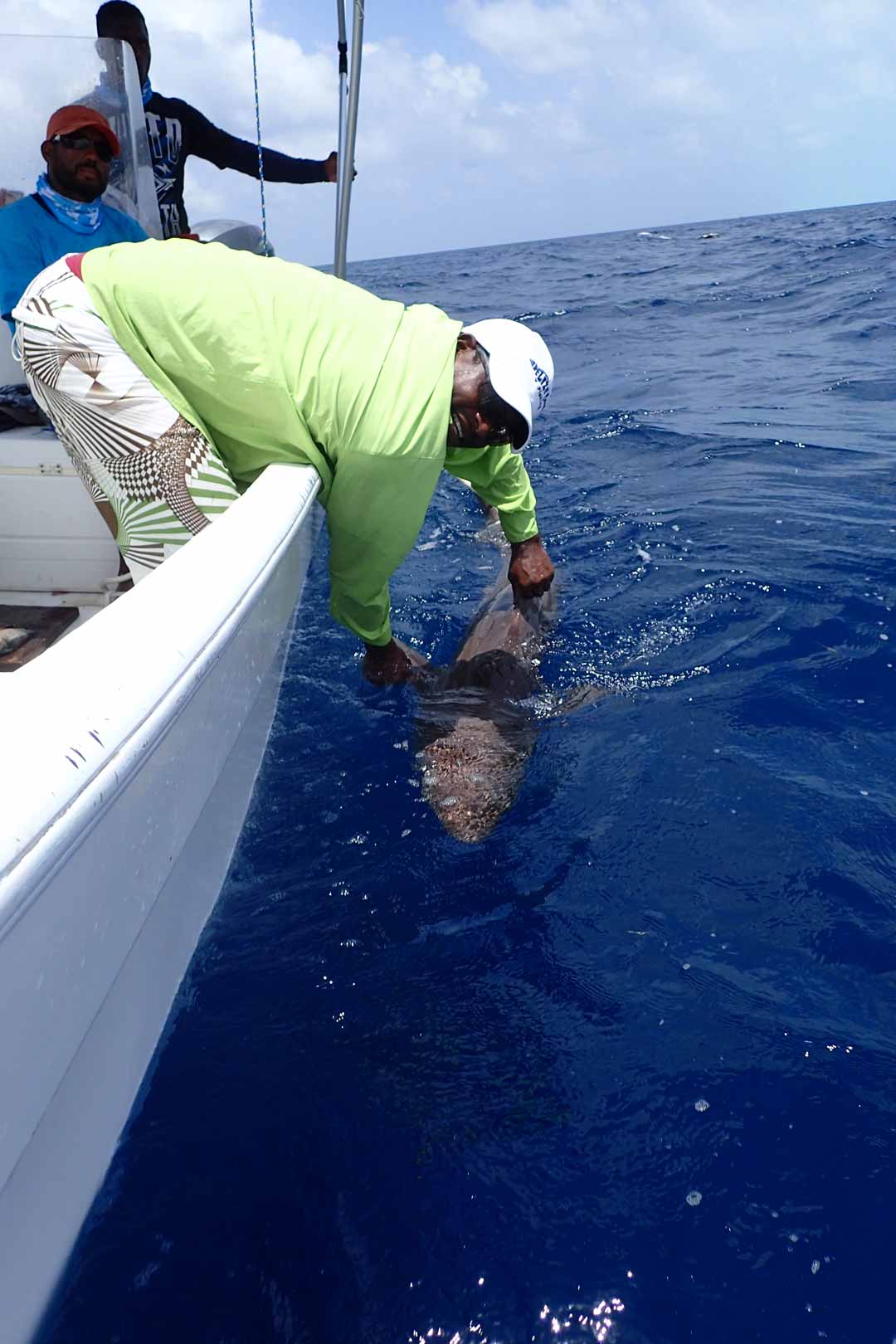 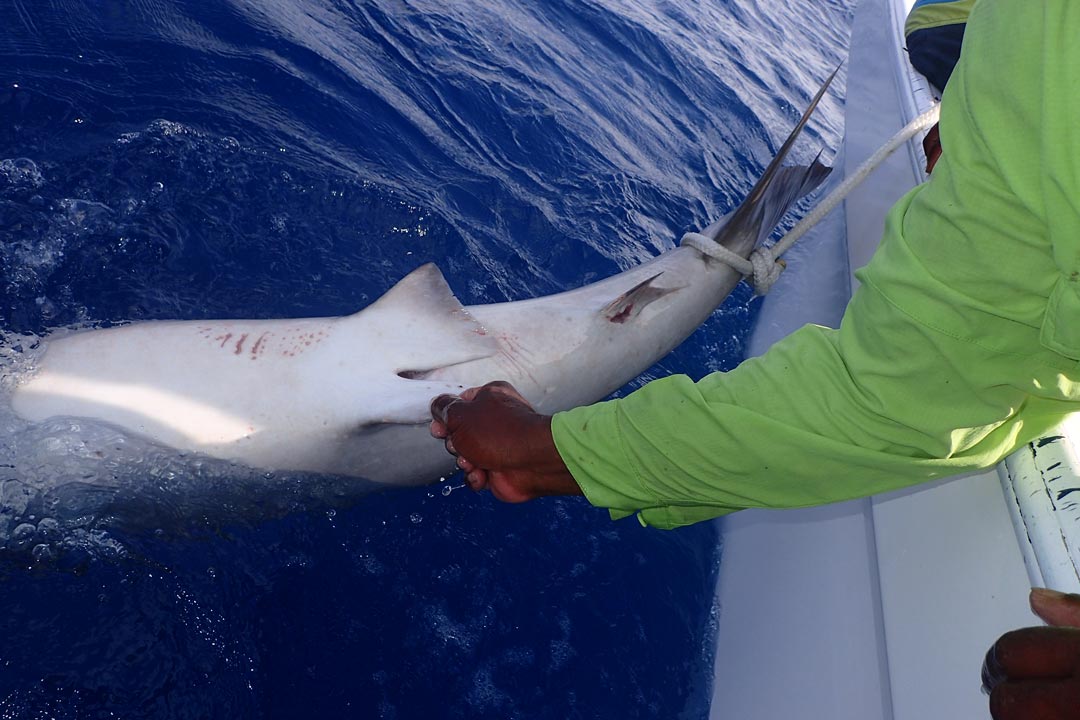 Overall the trip was a huge success! We went on to capture a total of five night sharks and one rare bigeye sixgill shark (Hexanchus cf nakamurai). But rather than satisfy my curiosity, this expedition has only piqued my interest. Where are these sharks coming from and where are they headed? Is this a mating aggregation? What other deep-water sharks are around that we haven’t seen yet? August 2017 has a big red circle around it on my calendar. 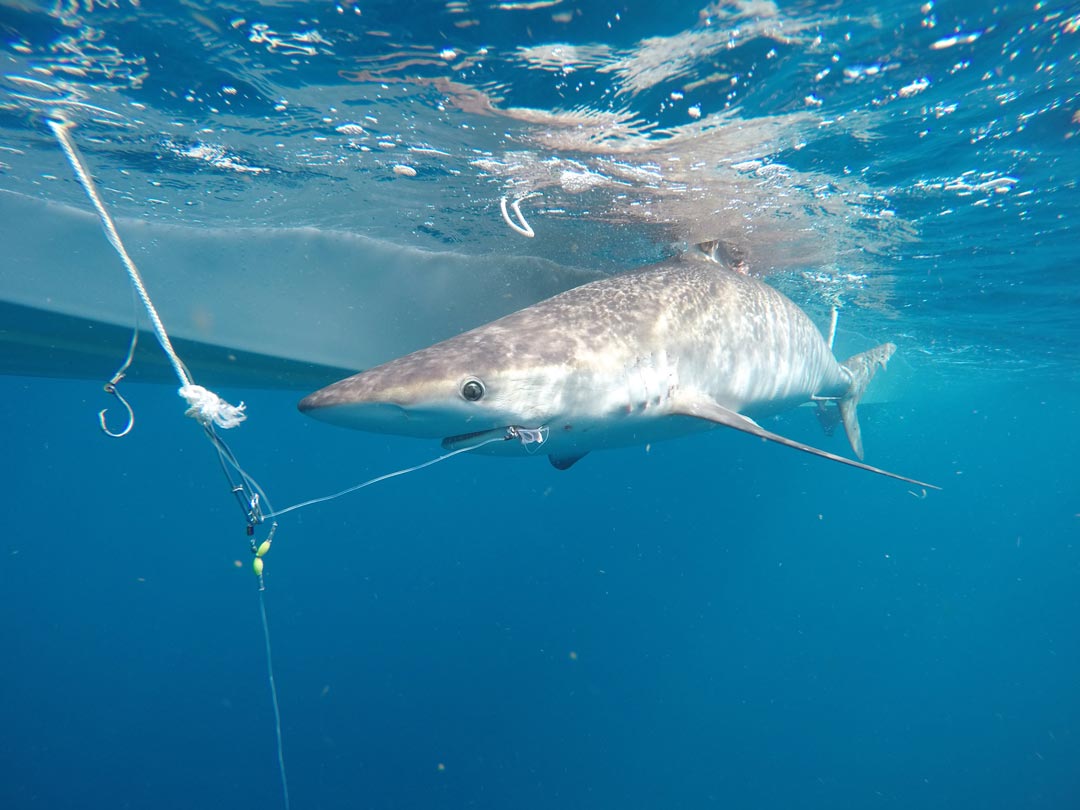 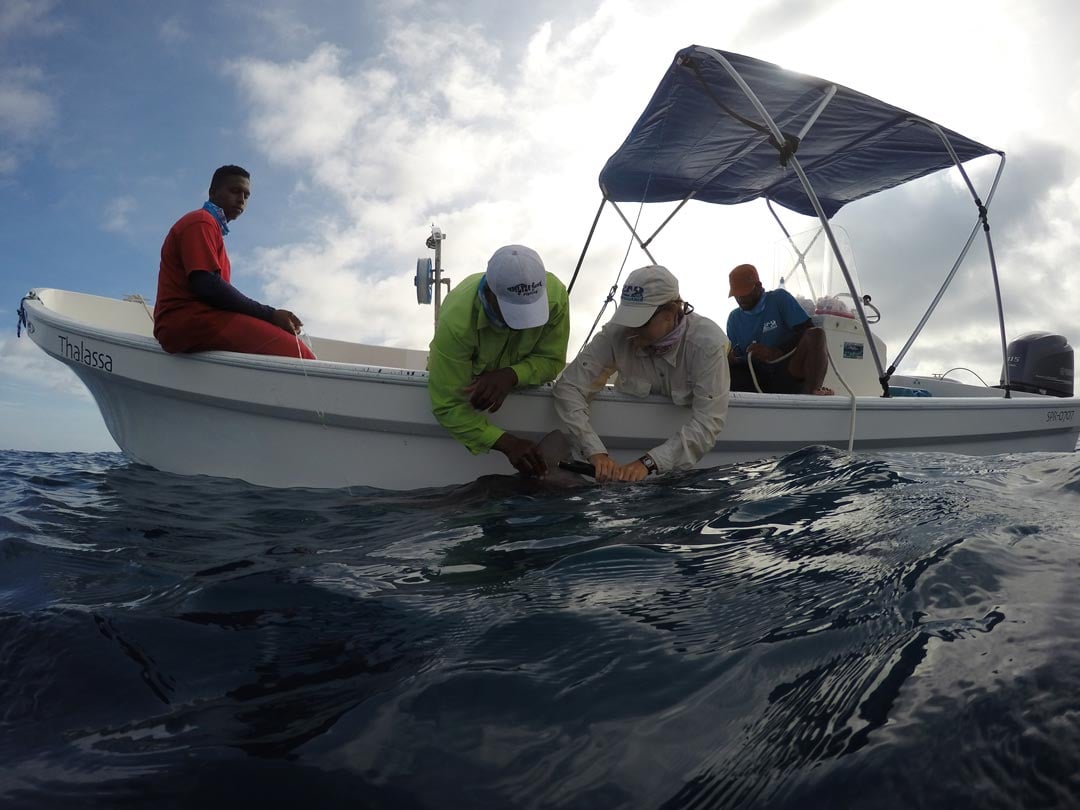