5 reasons why I do what I do: shark geneticist’s tale

It is no secret that shark populations are in decline. My study species, the oceanic whitetip, was thought to be one of the most abundant pelagic sharks at one time. Now research shows the species has declined by about 99.3% in the Gulf of Mexico and 90% in the Pacific Ocean from the 1950s to the 1990s. Between falling victim to longline fisheries and being overfished to supply the international shark-fin trade, oceanic whitetip populations are in trouble. Due to this over-exploitation, the IUCN Red List now classifies this shark as Critically Endangered in the western North Atlantic and as Vulnerable to extinction globally. Without some sort of intervention strategy, oceanic whitetips may join the ranks of the carrier pigeon and fall victim to extinction at the hands of humans. 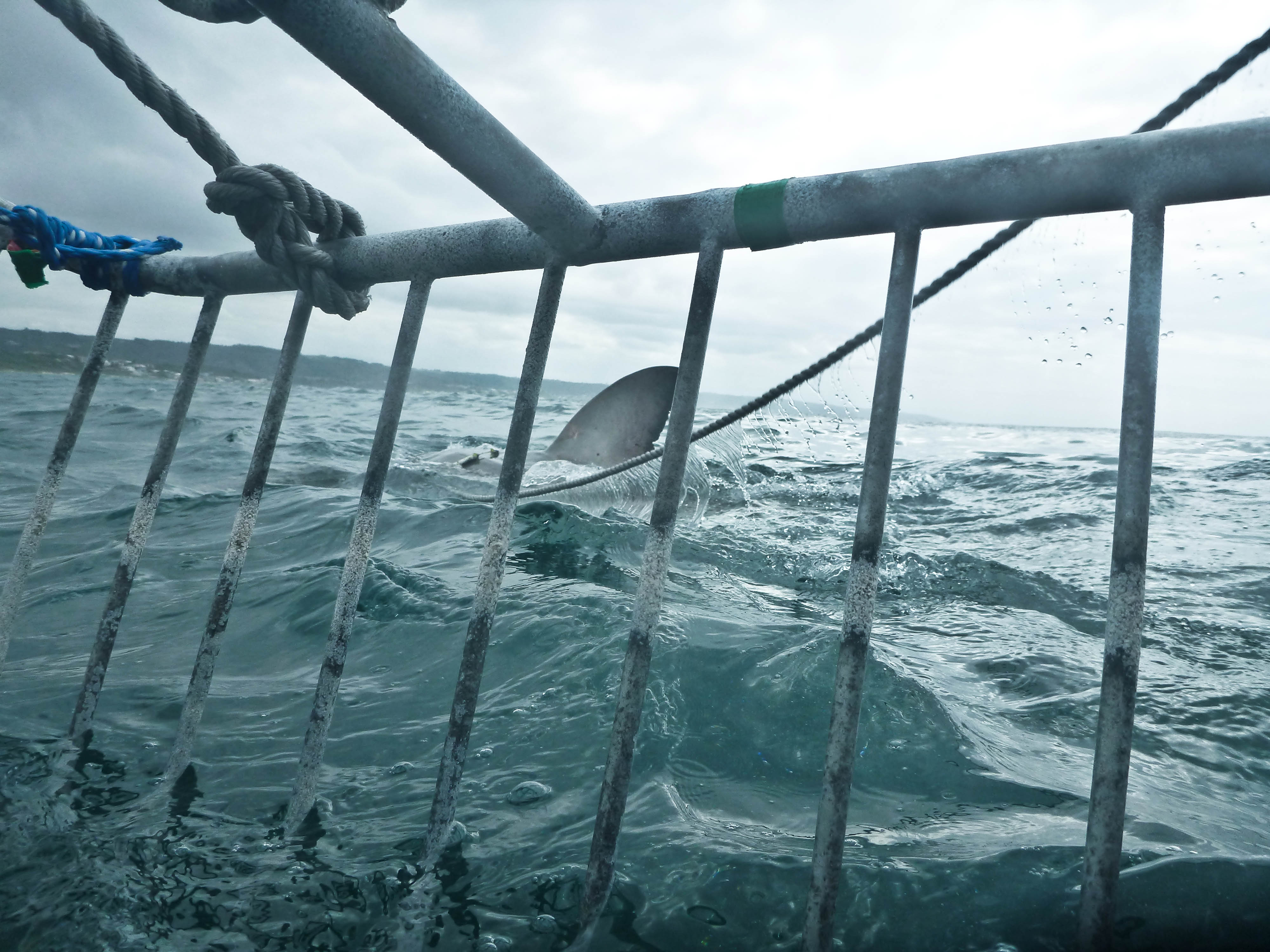 The dorsal fin of a 3.5 meter white shark (not to be confused with an oceanic whitetip) as seen by Cassandra Ruck while cage diving with White Shark Africa in Mosselbaai, South Africa.

To date, no genetic studies have been published about oceanic whitetip population dynamics. Using genetics as a tool to study population characteristics, including genetic diversity, is key to understanding how this species will respond to over-exploitation. For example, if sharks from different regions are genetically different (that is, from different stocks), it means they should be managed as individual populations to prevent any population from being reduced to the point where its unique genetic makeup is irretrievably lost. On the other hand, if sharks from widespread regions are found to be genetically similar, this indicates that they are migrating long distances and breeding together. If this is the case, the species would need to be managed through a coordinated global strategy that will require the large-scale cooperation of multiple nations. Either way, the goal is to identify the geographic scale of the stocks so that the best management and conservation policies can be implemented to aid species recovery.

By using a suite of genetic markers and statistical analyses, we can determine the population structure of the oceanic whitetip and shed some light on this important question. I will also be able to make inferences about past population changes and the current genetic health of the species.

But why does genetic diversity matter? If the genetic diversity of a particular population gets too low, as its size decreases, the degenerative effects of inbreeding may overshadow conservation efforts and the population will continue to be at risk of local extinction. Only a comprehensive, global genetic study can provide this critical information. 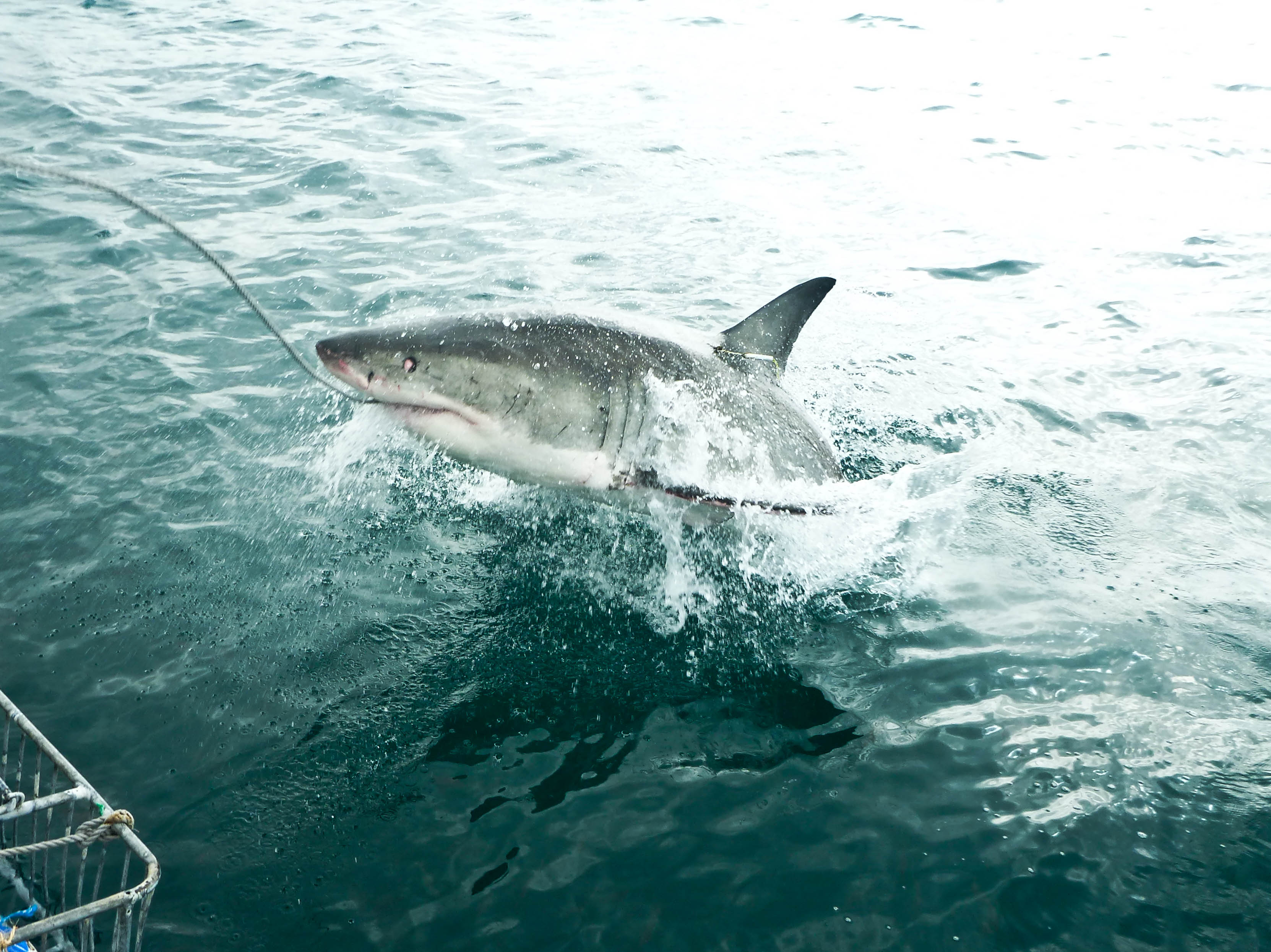 A 3.5 meter white shark breaches the surface and takes the tuna bait during a cage diving trip with White Shark Africa in Mosselbaai, South Africa.

In the words of the ocean conservationist Sylvia Earle, ‘With every drop of water you drink, every breath you take, you’re connected to the sea.’

Every living thing on this planet is connected to the sea, humans included. Through over-exploitation, pollution, habitat destruction and other anthropogenic effects, we have depleted what we typically think of as a vast and endless resource. Without healthy apex predator populations at the top of the food web, entire ocean ecosystems may be at risk.

Excitingly, oceanic whitetips were recently added to Appendix II of CITES, which means that there are now restrictions on the international trade of this shark and its products. This is a major step in the conservation of oceanic whitetips, but more progress must be made – not only for this species but for all marine life in order to sustain a healthy planet. 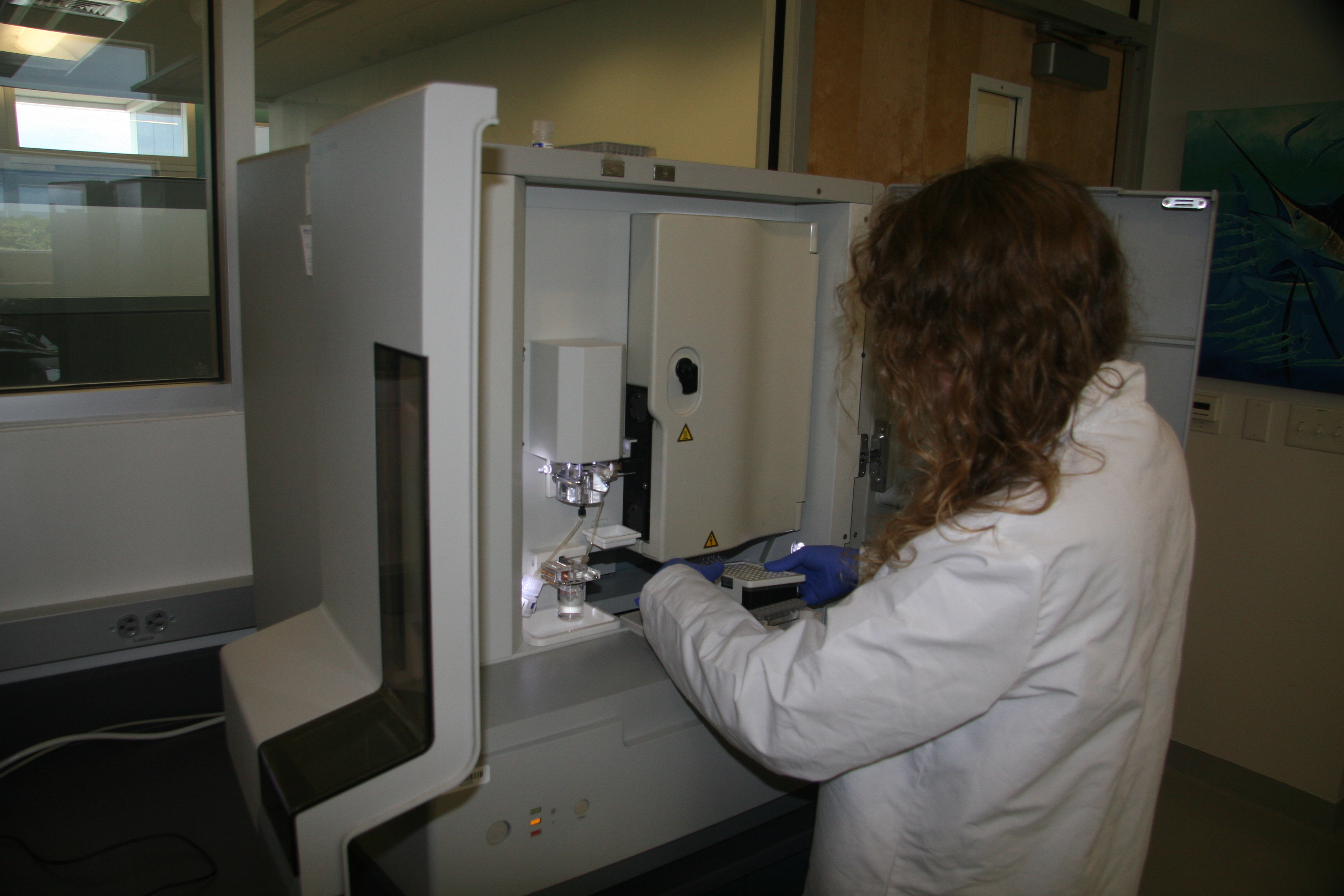 Cassandra Ruck loads a plate of oceanic whitetip genetic samples onto the ABI 3130 Genetic Analyzer to be sequenced. This is at the Save Our Seas Shark Centre USA and Guy Harvey Research Institute at Nova Southeastern University’s Oceanographic Center.

Taking a step aside from the conservation issues at hand, molecules are incredible. My scientific interests were sparked at a young age thanks to Bill Nye the Science Guy, the Magic School Bus and some excellent science teachers. Chemistry had the greatest appeal to me. The idea that everything you experience in the world around you is made up of these tiny particles in different arrangements, orientations and combinations still astounds me to this day.
As I made my way through my undergraduate career, my focus began to turn towards biochemistry, and eventually, molecular biology and genetics. I spend my days in the laboratory performing intricate genetic experiments and after many hours of analysis with powerful statistical tools I will be able to unravel the current status and past history of the oceanic whitetip from these tiny reactions. That to me is absolutely amazing.

Cassandra Ruck holds an adult pyjama catshark upside-down in tonic immobility after being caught by hand free-diving. This shark was caught for use in benthic shark studies at the Shark Lab Aquarium in Mosselbaai, South Africa.

Last – but certainly not least – sharks are just incredible. From the small puffader shyshark that is endemic to South Africa to the massive white shark breaching off Seal Island, every shark I have had the privilege to witness has been absolutely spectacular. More than 400 million years of evolution have led to over 500 species of sharks that help to keep the ocean ecosystems in balance. Healthy oceans have healthy shark populations. While I spend most days conducting experiments in the lab, running computer analyses and reading scientific papers, the sea and its inhabitants are my passion and motivation for doing this research.

Cassandra Ruck holds a juvenile pyjama catshark at the Shark Lab in Mosselbaai, South Africa. These juveniles were laid in eggs by the sharks in the aquarium, raised, and subsequently released that day into their natural environment.

Oceanic whitetip sharks have found a way to thrive in the harsh open oceans, but their pelagic lifestyles have made them vulnerable. Cassandra is using genetics to determine how connected their populations are and which ones are the most threatened.