Tristan Guttridge is the scientific director of the Bimini Biological Field Station, based at Bimini in The Bahamas. In February this year, he and his team published a new paper that reveals the migration patterns of great hammerhead sharks between Bimini and the coast of nearby Florida. In this interview he explains what their findings mean for these iconic predators.

Why is it so challenging to uncover the secrets of large migratory animals like hammerheads?
There are many reasons. To start with, as an apex predator the great hammerhead typically occurs in low numbers, so finding animals to work with is not that easy. In addition, the species is highly sensitive to capture, so attaching tags or obtaining biological data is challenging. Short soak times for long-lines or the use of float fishing techniques reduce the shark’s time on the line and decrease the risk of it dying. However, these sharks are highly mobile and often travel great distances, so tags such as satellite transmitters are the main choice for tracking them. But these tags are expensive, which makes it a challenge to generate funds! Tags can become dislodged or pop off early or they just disappear. Taken together, challenges such as these motivate and inspire our team. Figuring out fast and effective methods of capturing the sharks, attaching tags to them and the like are all part of the fun, the excitement of working with great hammerheads.

A tagged great hammerhead swims along the ocean floor at Bimini in the Bahamas. Photo by Charlotte Sams.

What have you discovered about the movements of Bimini’s hammerheads so far?
Great hammerheads routinely return to Bimini for the winter months. Approximately 20 to 25 individuals are identified each year and most – 80% – are female. Some sharks display strong site attachment to Bimini; we’ve recorded three females here each year for the past five years. In addition, many have made long-distance migrations at the end of the season, around April and May, travelling as far north as 500 kilometres (310 miles) off the coast of Virginia, which is a straight-line distance of 1,500 kilometres (930 miles) from Bimini. For example, a female known to us as ‘Gaia’ is a regular at Bimini during winter, but has made two consecutive spring migrations to South Carolina and back, a return trip of 1,600 kilometres (995 miles). She has been detected by an acoustic receiver array close to the coast across the summer months.

How could this knowledge help us to conserve them?
Knowing what habitats are important to great hammerheads during their life cycle is key to improving their conservation. If we know they are using particular locations, or following a particular migratory path to get to these locations, then we might be able to reduce encounters between them and fishers. Also, if females at Bimini are pupping in northerly locations in summer, they are probably crossing international borders and could be moving into the high seas at a critical stage in their lives. So it is crucial to identify these migratory paths and summer locations if we hope to bring about a recovery in their populations.

The Shark Lab team works quickly to collect data from a great hammerhead before safely releasing it. Photo by Charlottle Sams. 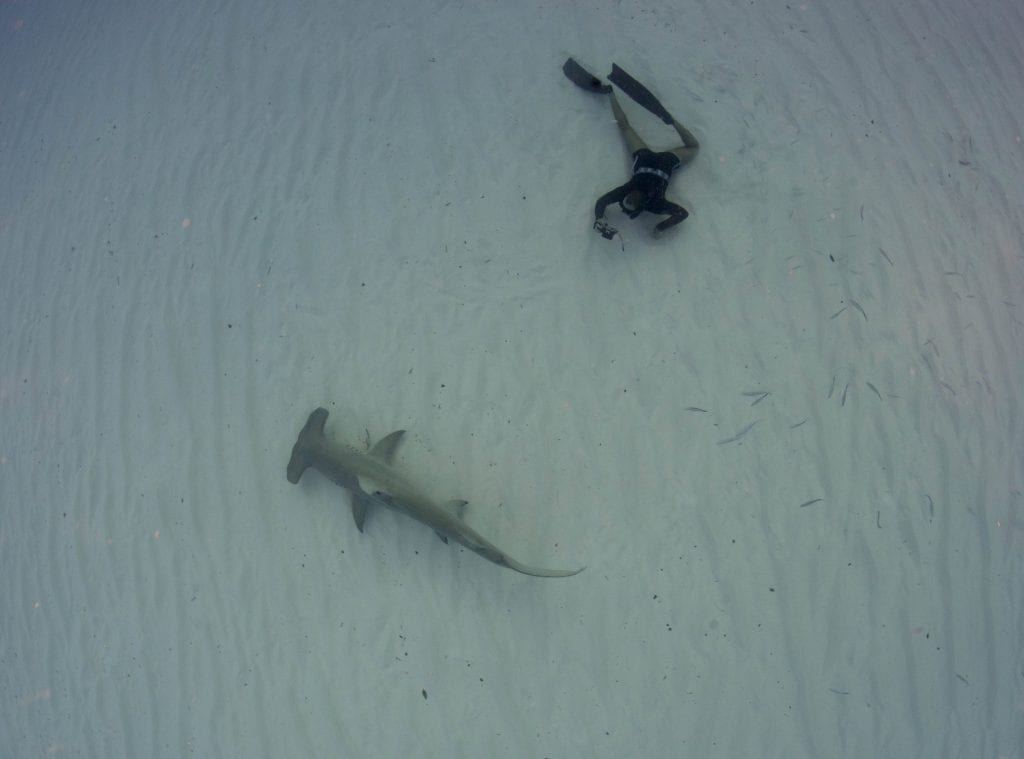 Photo ID is a non-intrusive way of identifying animals. Photo by Charlotte Sams.

What is natal philopatry and what does it mean in terms of habitat conservation?
Natal philopatry is when an animal returns to its own birthplace to give birth. Knowing this information about sharks is important because we could close off these specific areas during their pupping season (we call this time-area closure). This means that gravid females could give birth undisturbed during this sensitive period, which is important for recruitment and population recovery.

What evidence did you find in relation to philopatry in hammerheads?
We found evidence of seasonal residency, return migrations and site fidelity to Bimini in The Bahamas and to Jupiter, Florida. In other words, males and females return annually to the same locations in winter and often after long migrations. We have no long-term data to show natal philopatry, but our evidence so far certainly demonstrates that these sharks, like many other species, routinely return to the same areas as part of their annual migration. The next step is to figure out why they are using these particular habitats, what they are doing in them and whether the habitats are important for different life stages.

How might this affect their resilience from a genetic point of view?
It is unclear whether there are genetically distinct subdivisions of the great hammerhead shark. It is important to determine whether female great hammerheads are faithfully pupping in particular areas and whether they are returning to their birthplace. If such behaviour for the species is common, it would result in an absence of female-mediated gene flow, and thus the sharks being vulnerable to localised overfishing. The local population would be at risk of collapse. Currently, the lack of samples is impeding such a study, but our findings that some females migrate annually to the same summer coastal regions suggest that natal philopatry could be a possibility for this species.

The paper revealed that the iconic predators travel between Bimini and the coast of South Florida where this large animal was tagged by a separate team of researchers. Photo by Justin Gilligan.