Scientists in Australia have been researching the movements of juvenile white sharks to identify what habitats are important to them, how these movements connect areas where they are observed and used these data to examine population trends.

Juvenile white sharks (less than 3.0 m in length) occur in a variety of habitats in Australian waters ranging from coastal surf zones to continental slope and offshore waters. However, compared to white sharks of larger sizes relatively little is known about their patterns of movement or if there are habitats that they prefer. Recent research by CSIRO researchers Barry Bruce and Russell Bradford indicates that juvenile white sharks make extensive movements along at least 2000 km of the east coast of Australia from southern Queensland to Tasmania. They travel along the continental shelf, often around the 60 – 120 m depth contour and make irregular excursions into both near-shore and offshore waters. When offshore, they have been recorded diving depths of up to 1000 m. These movements make them difficult to study. However, this research has also identified two highly restricted nursery areas in eastern Australia that appear to be important habitat for the species. The most studied of these so far has been the Port Stephens region of central New South Wales (approximately 150 km north of Sydney) where juvenile white sharks aggregate in waters adjacent to three beaches along an area of approximately 50 km of coast. In this area, they are regularly observed very close to shore and often in the surf zone. The second nursery area is 1000 km to the south of Port Stephens in eastern Victoria near to a large coastal bay named Corner Inlet. These two nursery areas are used in different seasons by juvenile white sharks. Sharks commonly occur in the Port Stephens nursery area from late winter to early summer after which most appear to migrate south to the Corner inlet nursery area where they reside over the summer-autumn. 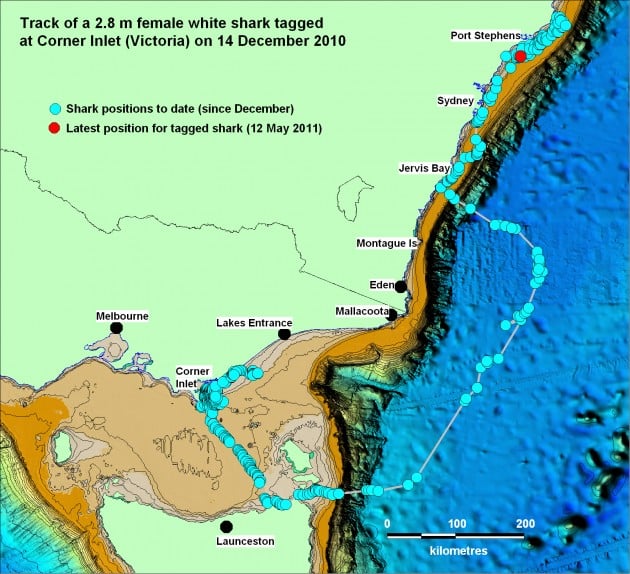 To date most of the CSIRO research team’s satellite tracking has focussed on tagging juveniles in the Port Stephens area. This satellite tracking of juvenile white sharks has provided some excellent data on their movements along the coast. However, movement of sharks tagged in the Corner Inlet region, and specifically if they return to the Port Stephens area has not been well studied. To further investigate the linkage between these two nursery areas, the CSIRO team tagged a 2.8 m juvenile white shark in Corner Inlet on 14 December 2010 with a satellite tracking tag mounted on it’s dorsal fin. The female shark spent the following three months in coastal waters adjacent to Corner Inlet before moving away from the area on 15-16 March 2011. The shark initially headed southeast across Bass Strait to northern Tasmania before heading offshore 200 km east and into the Tasman Sea where is swam over bottom depths of 4000 m. The shark turned north on 21 March, maintaining its distance from the coast for the next five days after which it abruptly turned west and tracked back to the continental shelf in southern New South Wales. It then resumed its travel north along the continental shelf until it reached the Port Stephens area, arriving on 2 April 2011. The shark has been in waters off the coast of the Port Stephens area since, confirming a return link between these areas. The shark’s last position (12 May 2011) placed it in mid-shelf waters off the Port Stephens region approximately 20 km from the coast. The research team hope to tag further juvenile white sharks in the Corner Inlet region in late 2011 and early 2012 to further investigate the connectivity in shark movements between these two nursery areas and establish if individuals make return migrations over several years.