The Sharkiest place on the planet

It started off as a young aspiring marine biologist’s ‘pipe dream’, but with a few years of hard work and persistence, this dream job became a reality. 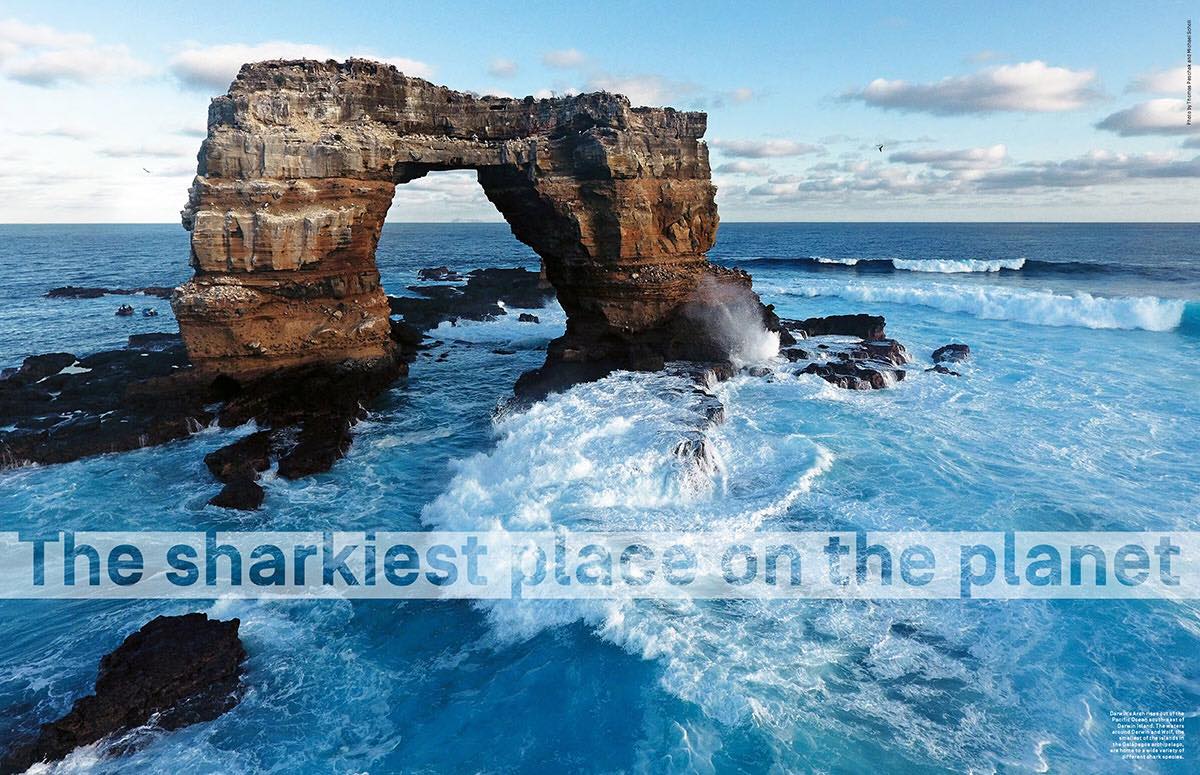 Darwin's Arch rises out of the Pacific Ocean south-east of Darwin Island. The waters around Darwin and Wolf, the smallest of the islands in the Galápagos archipelago, are home to a wide variety of different shark species. Photo by Thomas Peschak and Michael Scholl

For Pelayo Salinas, joining the Charles Darwin Foundation in the Galápagos as their Senior Marine Ecologist was just the beginning. Given his passion for the ocean and Galápagos, he has helped facilitate a number of monumental milestones for this wild and unique archipelago in the eastern Pacific Ocean which is home to the world’s largest population of sharks.
Pelayo and his team have assisted in the development of a no-take marine protected area around the islands of Darwin and Wolf through the data they generated with their research. Another impressive milestone was having the hard work and findings of his team, as well as the beauty of this unique and fragile ecosystem feature on the cover of the June 2017 National Geographic Magazine.

Video by: Pelayo Salinas. In March 2016 Ecuador declared the islands of Darwin and Wolf in the Galapagos a 40 000-square-kilometre fully no-take marine sanctuary. These islands have the largest biomass of sharks in the world!

Pelayo has managed to achieve all this and more in five short years with Charles Darwin Foundation. After we spoke to him for his feature, The Sharkiest Place on the Planet in the Save Our Seas Magazine, we can say with certainty that Pelayo is only getting started.
In this feature, which is accompanied by stunning photography from Thomas P. Peschak, you are able to experience the marine wonders of the Galápagos first-hand as Pelayo shares the work conducted by the Charles Darwin Foundation team. From confirming that Darwin and Wolf islands harbour unique underwater communities (including the largest concentration of sharks in the world), to their investigation of the El Niño event, which shared similarities with a few of the predicted extreme effects of climate change on the marine environment. He also talks about the Shark Education outreach programme; a local initiative teaching children about the importance of Galápagos sharks in the hopes of changing negative perceptions.

Video by Pelayo Salinas. Darwin’s Arch on the Galapagos is often referred to as ‘the bus stop’. This video is a good example of an incoming 12m gentle ocean giant, a sexually mature female whale shark.