We are extremely happy that the documentary Surfing and Sharks, for which Save Our Seas supplied the majority of funds, was a great success!

According to a review of Surfing Village:

In South Africa between Durban and JBay lies approx 1000km of untaimed topographical and oceanic paradise, in the middle is the Wild Coast. For local surfers Lungani Memani, Andrew Lange and Avuyile Ndamase, it’s their home .

Every year in June the ocean swells to it’s peak, hosting the countries largest surf conditions and also becomes host to the sardine run bringing together a huge marine bio-diversity including many species of sharks.

This documentary goes up close with Pro Surfers Lungani, Andrew and Avuyile, their family’s traditions and tribulations along side a hand selected group of the best shark experts from the region to uncover the real secrets and stories that surround the shark stigma that exists in South Africa.

‘What do you get when you add two cinemas, 8 blow-up sharks and 300 people?’ asks Spike (Steven Pike) Director of the Wavescape Film Festival. This was after the world’s first public screening of a unique film, Surfing and Sharks, dealing with a taboo subject for many surfers.

‘You get the sold-out, vibey, intimate premiere of the film Surfing and Sharks at the Labia Cinema last night (December 15). The double full house (both cinemas were full) was testimony to the fascination that surfers have with sharks, but not only that, it also highlighted the fascination that the general public has with sharks and how surfers deal with being at the ‘frontline’ of interaction with this apex predator.’

Virtually the entire crew of the film turned out, including director Julian Watson and producer Joep Van Oppen who flew out from Australia and the Netherlands respectively. Also present were Peter and Georgina Verhoog, joint heads of the Save Our Seas Foundation who gave financial backing to the project. Nicky Greenwall from e.tv was spotted among the crowd, as were a host of pro, amateur, recreational and highway surfers.

You can watch the trailer at: 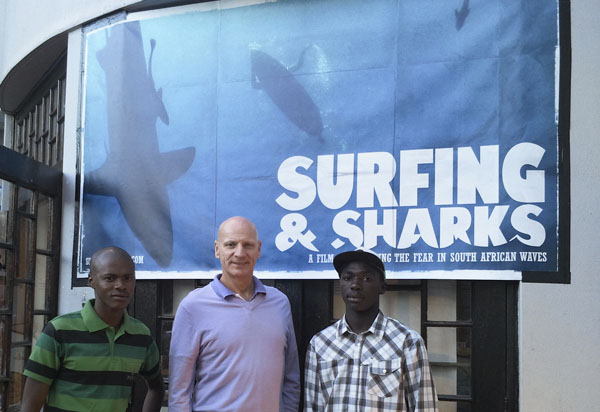