Lots of new findings made it to print these past few months, with SOSF-funded researchers publishing their research in several scientific journals. Here’s a quick round-up of the latest news. 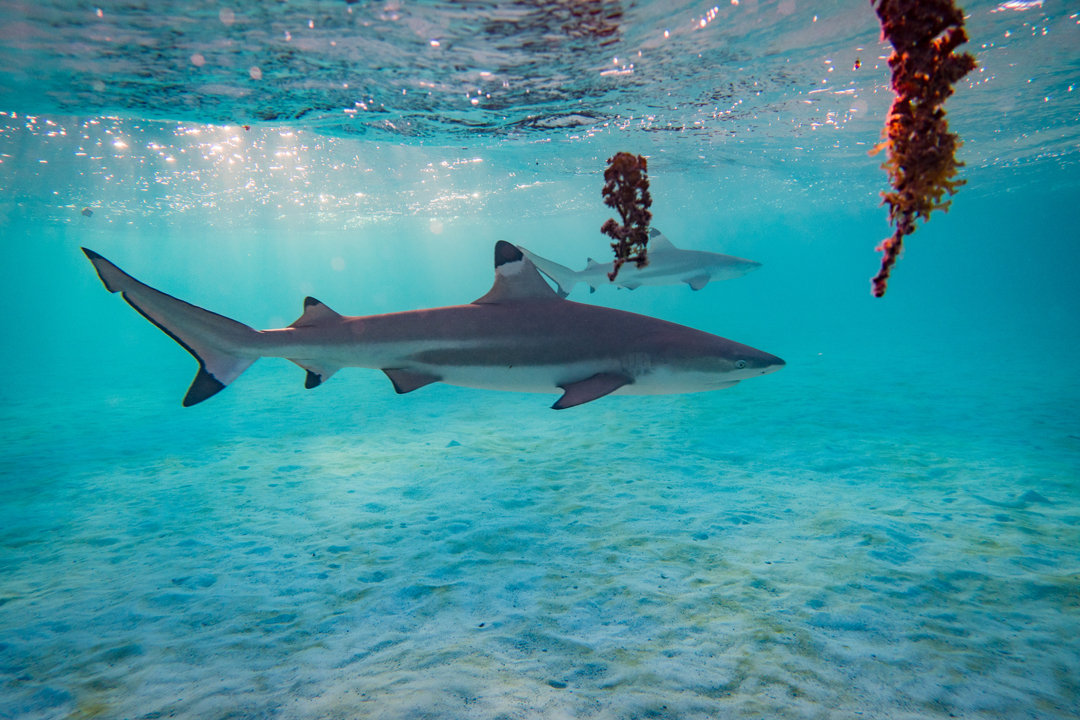 Guillaume Rieucau and a team of co-authors that included Johann Mourier and Michael Heithaus had their eyes on the sea, from the sky. Their paper, published in June in the Journal of Fish Biology, used unmanned aerial vehicles (UAV) (that’s drones to the rest of us!) to study sharks at the sea surface. Rieucau tested a new image analysis technique to identify individual sharks in a shoal, and to understand their swimming patterns and behaviour as part of large groups. Do they collectively change their shoaling behaviour if something in their environment changes, or to respond to human-induced disturbance? To answer this, they flew drones at set altitudes over a shallow, sandflat area and a deeper channel in Moorea, French Polynesia. Their findings give us new insights, using a more unobtrusive method, into the behaviours of blacktip reef sharks (Carcharhinus melanopterus) in shallow lagoon habitats. The study also advances our ability to study shark behaviour with minimal interference, and to quickly process the data afterwards.
You can read the study here.
**Reference: Rieucau, G., Kiszka, J. J., Castillo, J. C., Mourier, J., Boswell, K. M., & Heithaus, M. R. 2018. Using unmanned aerial vehicle (UAV) surveys and image analysis in the study of large surface‐associated marine species: a case study on reef sharks Carcharhinus melanopterus shoaling behaviour. Journal of fish biology, 93(1), 119-127. 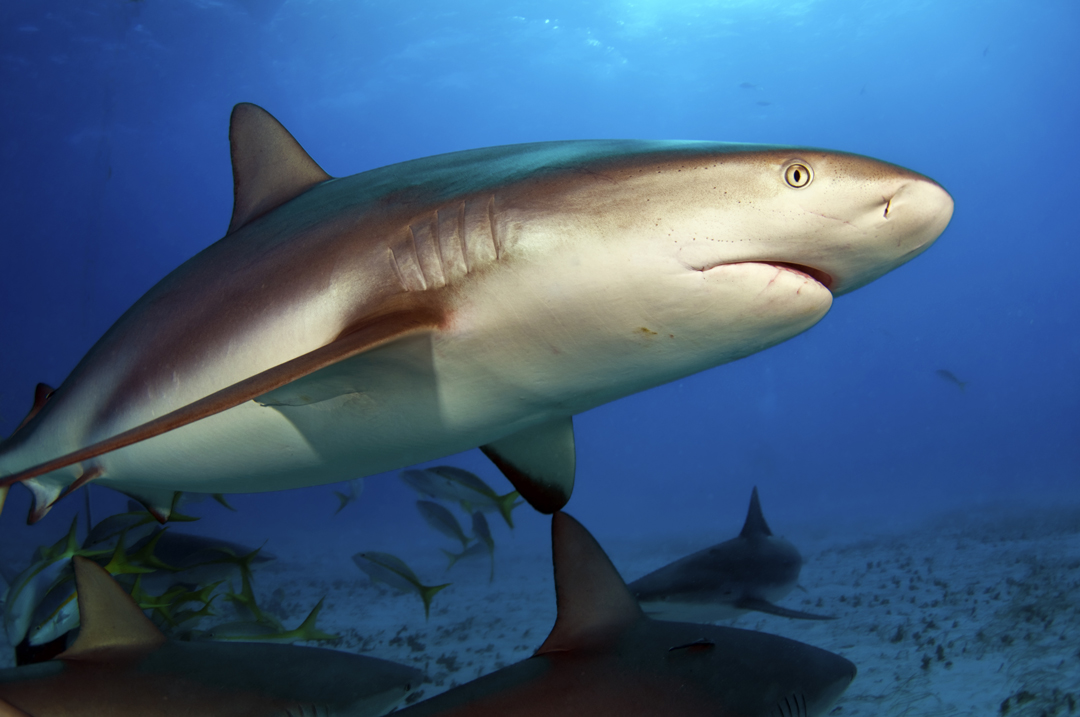 Oliver Shipley also looked at reef sharks, this time of the Caribbean-kind (Carcharhinus perezi) in the Bahamas. The paper, published in July in Environmental Biology of Fishes looked at how Caribbean reef sharks moved across the coastal regions of Eleuthera, and measured their activity levels. To do this, they tagged 14 adult sharks with acoustic transmitters that sense pressure and acceleration. These tags help scientists track where sharks are moving, and how active they are by transmitting 3D information about the depth and acceleration of the shark as it swims through the ocean. This information gives researchers insights into what areas of ocean are especially important for sharks, to better manage those regions and the shark populations that depend on them. Shipley and his co-authors showed that male and female Caribbean reef sharks may have different home range sizes, but cautions that this finding needs further testing. The fringing coral reefs and deeper drop-off at the continental edge were where the sharks spent most of their time, rather than in shallower water inshore. They were most active at night and near the reef shelf. All these findings are important for the future management of these sharks, to help better design marine protected areas (MPAs) that best protect them in their key habitats and important feeding grounds.
You can read the study here.
**Reference: Shipley, O. N., Brownscombe, J. W., Danylchuk, A. J., Cooke, S. J., O’Shea, O. R., & Brooks, E. J. 2018. Fine-scale movement and activity patterns of Caribbean reef sharks (Carcharhinus perezi) in the Bahamas. Environmental Biology of Fishes, 101(7), 1097-1104. 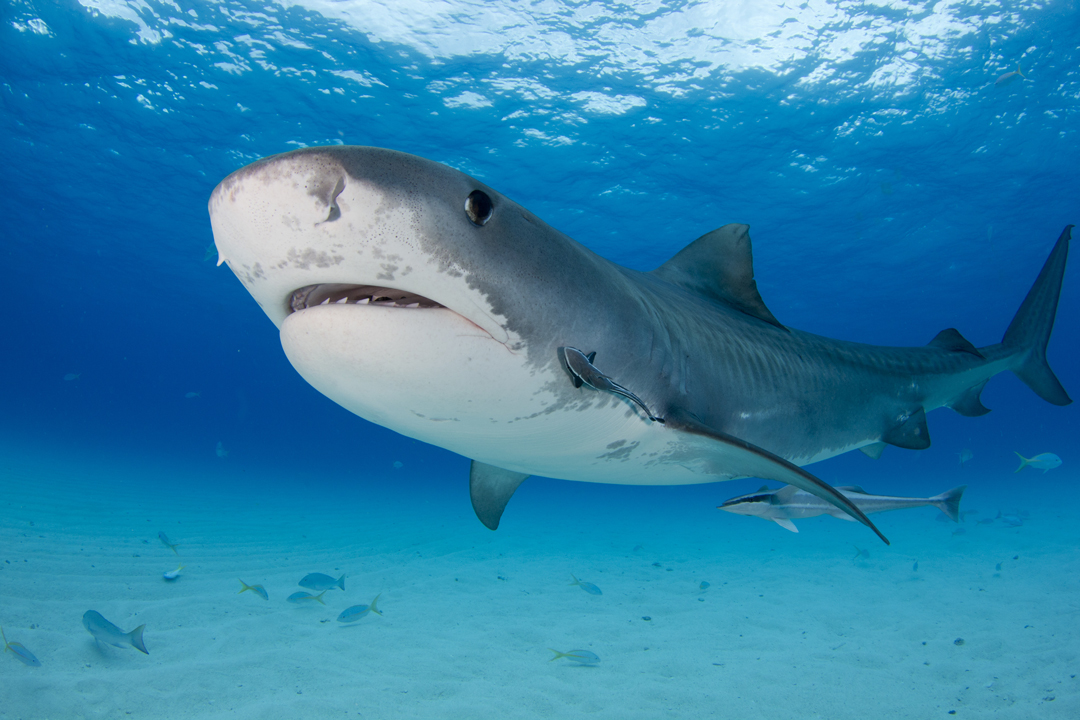 Finally, Neil Hammerschlag and co-authors looked into how female tiger sharks (Galeocerdo cuvier) might cope with the price of pregnancy in Physiological and Biochemical Zoology in July. Reproduction is a costly business; at least, it’s pretty demanding when it comes to a female shark’s available energy. Large sharks, like the tiger shark, often have long gestation periods and give birth to well-developed babies. Scientists think that this (understandably!) incurs a big energetic cost for the mother shark. Hammerschlag and his team looked at the relationship between the reproductive and energetic states of the shark. They asked whether female tiger sharks at different stages of reproduction show different levels of triglycerides (a type of fat found in the blood, stored in fat cells and released between meals to provide energy) and different sized girths (usually an indication of the shark’s overall condition). They also asked whether the levels of progesterone, testosterone and estradiol (collectively called the sex hormones) in each reproductive stage are linked to these levels of triglycerides and girth size. Theirs is the first study that uses non-lethal methods to understand fat stores and how they change with different reproductive states in large sharks. Understanding what underpins breeding success in sharks like the tiger shark helps scientists better manage their populations.
You can read the study here.