For the second year in a row, an international team of biologists captured and satellite tagged a record number of rare oceanic whitetip sharks. Once considered one of the most abundant apex predators in all of the world’s tropical oceans, the oceanic whitetip is now listed as “critically endangered” in the western Atlantic by the International Union for the Conservation of Nature (IUCN). The Bahamas, world renowned for its healthy shark populations and proactive conservation stance, is one of the few places left in the world where these animals can be found in relatively large numbers. For reasons as yet unknown, a steep oceanic drop-off in the central Bahamas, just 1 km off Cat Island, attracts these enigmatic apex predators each spring.

This May, on the heels of a major conservation milestone – the prohibition of all commercial trade of sharks throughout the 630,000 km2 of The Bahamas – researchers from the Cape Eleuthera Institute, Stony Brook University, Abercrombie and Fish, Microwave Telemetry, Inc. and the University of North Florida deployed 29 pop-up satellite archival tags on oceanic whitetips, bringing the study total to 40. These tags record depth, temperature and location for periods up to one year, at which time they self-detach from the shark and report their data to orbiting satellites. The scientists also collected blood, DNA samples and conducted ultrasounds of every female shark caught to see if they were pregnant. Tracking pregnant sharks could provide clues to solve the mystery as to where these animals give birth, the first step to protecting these important areas. 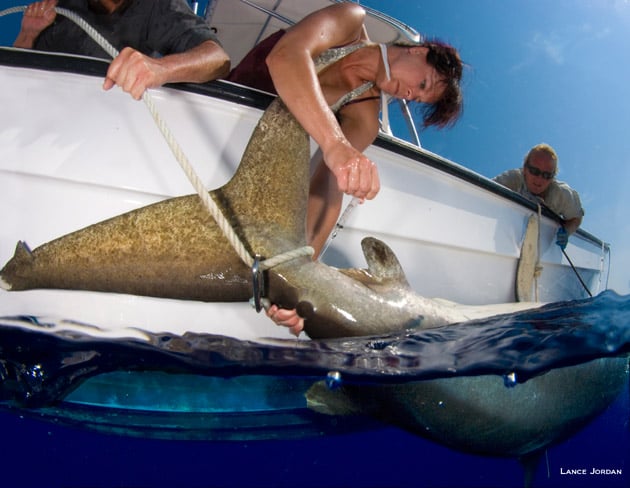 Preliminary findings from the first year of the study revealed oceanic whitetip sharks move long distances but still spend a lot of time in The Bahamas. “Our study shows that many fishing nations in the Atlantic will have to work together to protect this species” said Dr. Demian Chapman, Assistant Director of Science at the Institute for Ocean Conservation at Stony Brook University. “The fins of this species are commonly used in shark fin soup, a delicacy in Asia, so monitoring of international trade should be a high priority for resource managers.” Edd Brooks, Program Manager of the Shark Research and Conservation Program at the Cape Eleuthera Institute went on to say “The Bahamas is one of the last places on the planet that you can still reliably encounter this species. Better still, the Bahamian government had the foresight to protect them, and all other species of sharks, within Bahamian waters – a significant conservation benefit for this vulnerable species during the months they reside in these waters.”

Determining if female oceanic whitetips are pregnant is not an easy task, especially while onboard a small boat in the Atlantic. “We were lucky to have generally cooperative weather and sea conditions during this year’s expedition but using an ultrasound machine in the marine environment always presents a challenge,” explained Brenda Anderson, graduate student at University of North Florida. “Ultrasound imaging is one of the best ways to confirm pregnancy in these animals, and the fact that I detected pups inside a female is truly exciting.” 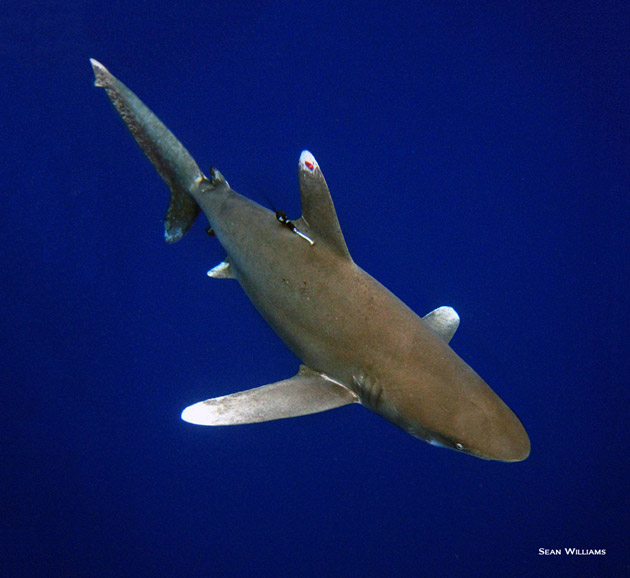 At a predetermined time, the satellite tag (in black) detaches from the shark and floats to the surface. There it will begin transmitting to polar-orbiting satellites up to a year’s worth of data revealing where the shark traveled, in addition to the water depths and temperatures that were utilized. Photo by Sean Williams.

Although most of the sharks tagged in 2011 roamed thousands of kilometers from the tagging location at Cat Island, all individuals eventually returned to Bahamian waters. Dr. Lance Jordan of Microwave Telemetry, Inc. was surprised when satellite tag data revealed that these open ocean animals use Bahamian waters for much of the year. “Very little is known about the migratory behavior of this species and the data obtained from the satellite tags will be invaluable in future management of this severely overexploited species. Essentially, any area this species utilizes could be interpreted as critical habitat. It’s lucky that these animals are spending a great deal of time within the refuge of Bahamian protected waters.” Global shark populations have undergone major declines within the last 50 years as a result of the commercial shark fin fisheries and incidental capture in longlines that target other species, such as tunas. While sharks gain protection from the shark sanctuary, the shark diving industry (which represents a major contributor to the Bahamian economy) also benefits from their presence in surrounding waters. Additionally, recent scientific studies have shown ecosystem health is dependant, in part, on the presence of apex predators like sharks.

The research team expects to publish their preliminary findings on the movements and behavior of sharks tagged in 2011 in the coming months, and is already planning the 2013 expedition. The 2012 research expedition was funded by Microwave Telemetry, private donors to the Institute for Ocean Conservation Science at Stony Brook University and The Save Our Seas Foundation.