Red List workshop for sharks and rays of the Arabian Seas

From 5 to 9 February 2017, 21 delegates from 15 countries came together at Yas Island in Abu Dhabi, United Arab Emirates (UAE), to take part in one of a series of regional conservation workshops dedicated to assessing sharks, rays and chimaeras (chondrichthyans) for the IUCN Red List. With the generous support of the Save Our Seas Foundation and the Environment Agency–Abu Dhabi, conservation status assessments were completed for more than 150 species in the Arabian Sea region, where intensifying human pressure on the ocean is threatening a diversity of marine life.

Led by Rima Jabado, the regional co-chair of the IUCN SSC Shark Specialist Group, experts from the region convened over the five-day period and shared data from studies on fisheries and elasmobranchs in Somalia, Sudan, Eritrea, Saudi Arabia, Yemen, Oman, the UAE, Kuwait, Qatar, Bahrain, Iran, Pakistan, India and Sri Lanka, as well as within the area covered by the Indian Ocean Tuna Commission (the fisheries management organisation responsible for the region). Trained Red List facilitators used their assessment skills to glean important biological, fisheries and trade information about chondrichthyans that would contribute to the conservation assessments. 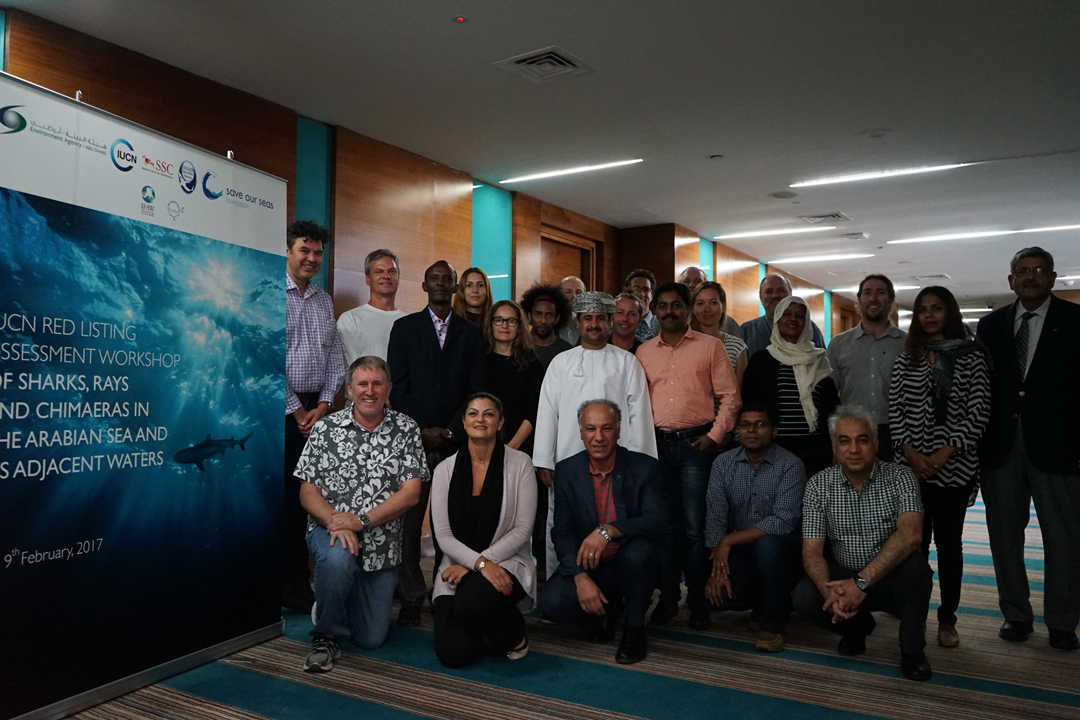 One of the key findings of the recent summary of global Red List status was the lack of information available from the Indian Ocean. Decades of work by concerned scientists was brought to focus on the status of species in the region. Rima has been flagging the plight of species here for more than five years, but this was the first time that many of us got a chance to hear other local specialists weigh in on the issue. All the information about these charismatic animals that is available from this part of the world was used to inform a threat assessment that helped IUCN experts to reach conclusions about species’ conservation status. Of the 153 species, about 15% were listed as Data Deficient, indicating that further research is needed to determine a status.

Of even greater concern was the fact that large numbers of chondrichthyans in the region are deemed threatened, which signifies that human pressures, including overfishing and the degradation and loss of habitat, are leading to substantial declines in population size. Such reductions increase the risk of extinction for the species affected, impoverishing the diversity and integrity of ocean ecosystems in the Arabian Sea. Management actions are urgently needed to reverse these trends, especially for the species provisionally listed as Critically Endangered.

Importantly, bright spots do exist: more than a quarter of the species are listed as Least Concern. This indicates that populations of these chondrichthyans are faring well in spite of human pressures. In many cases, these are deep-sea species that tend to live in refuges currently inaccessible to fisheries. Some other species are small and highly productive, and they are the mainstay of catches in the region. Moving forward, it will be important to monitor such populations and to manage them sustainably as fisheries expand and intensify.

Although the workshop participants uncovered many worrying trends, there is an opportunity to put in place national and regional measures that will protect those species that are not threatened and to reverse the downward slide of those that are. The results of this workshop will provide researchers, governments and fishers with the information they need to embark on efforts to move species away from classifications like Data Deficient and Endangered and thus safeguard the life-supporting ocean ecosystems for current and future generations.

The IUCN SSC Shark Specialist Group looks forward to supporting individuals, institutions and countries in the implementation of effective conservation measures to work towards a healthier ocean environment. Immense thanks go to the Environment Agency – Abu Dhabi and the Save Our Seas Foundation for supporting this important step towards a healthy ocean in the Arabian Sea region.