Q & A with Chris Scarffe

Today, the film Mother Ocean will be screened at the National History Museum in Maputo, Mozambique. The screening will be attended by numerous important decision-makers in the hope that they will be inspired to protect their country’s marine megafauna. The film was funded and supported by the Save Our Seas Foundation. Mother Ocean tells the story of Mozambique’s manta rays and whale sharks – species that are a drawcard for tourists but also the unfortunate by-catch of local fisheries.

We spoke to the film’s director and producer, Chris Scarffe, to learn more about it.

What is your personal connection to the story of Mozambique’s gentle giants?
For me, as a wildlife film-maker, whale sharks and manta rays were always near the top of my ‘must-see’ marine bucket list. However, despite numerous attempts, I was never fortunate enough to catch even a glimpse of either. Determined to change this, in 2007 I packed my bags and headed to Tofo Beach in Mozambique, a globally renowned hotspot for these ocean giants. I wasn’t disappointed, as in the first week I saw more whale sharks and manta rays than I could ever have hoped to.
I was hooked and fell in love with not only the diving, but also the country and its people. What was supposed to be a few weeks’ holiday turned into an incredible four years of my life, during which I formed a film company in Tofo. This meant that I was lucky enough to dive with these animals almost every day. But it also led me to witness at first hand the reduction in their numbers, which made me determined to produce a film to try to put a halt to this decline. 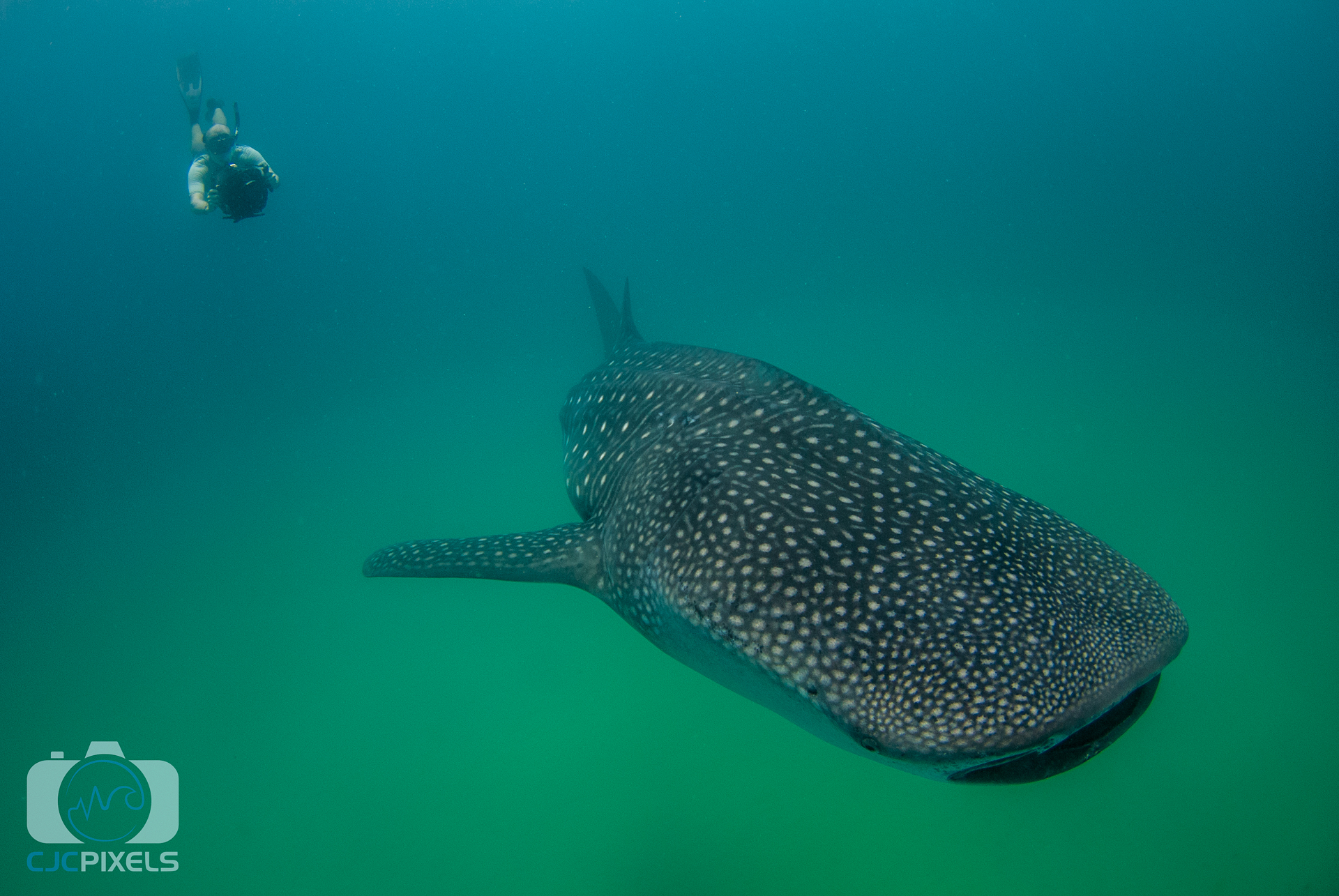 Where did you meet Carlos Macuacua and how did he become your ambassador?
Carlos is Mozambique’s first dive instructor who was born and raised in Tofo Beach. When I arrived in Tofo, Carlos was one of my first dive guides. We hit it off instantly as both friends and dive buddies, and over the years we spent countless hours together diving with these oceanic behemoths.
Carlos went on to found Bitonga Divers, an organisation dedicated to marine conservation and the training of other Mozambican dive guides and instructors. So when Dave Charley and I set about making an educational film for a Mozambican audience on the shark-fin trade in Mozambique, Carlos was the natural choice to be the front man and advisor for this documentary, and subsequently Mother Ocean. 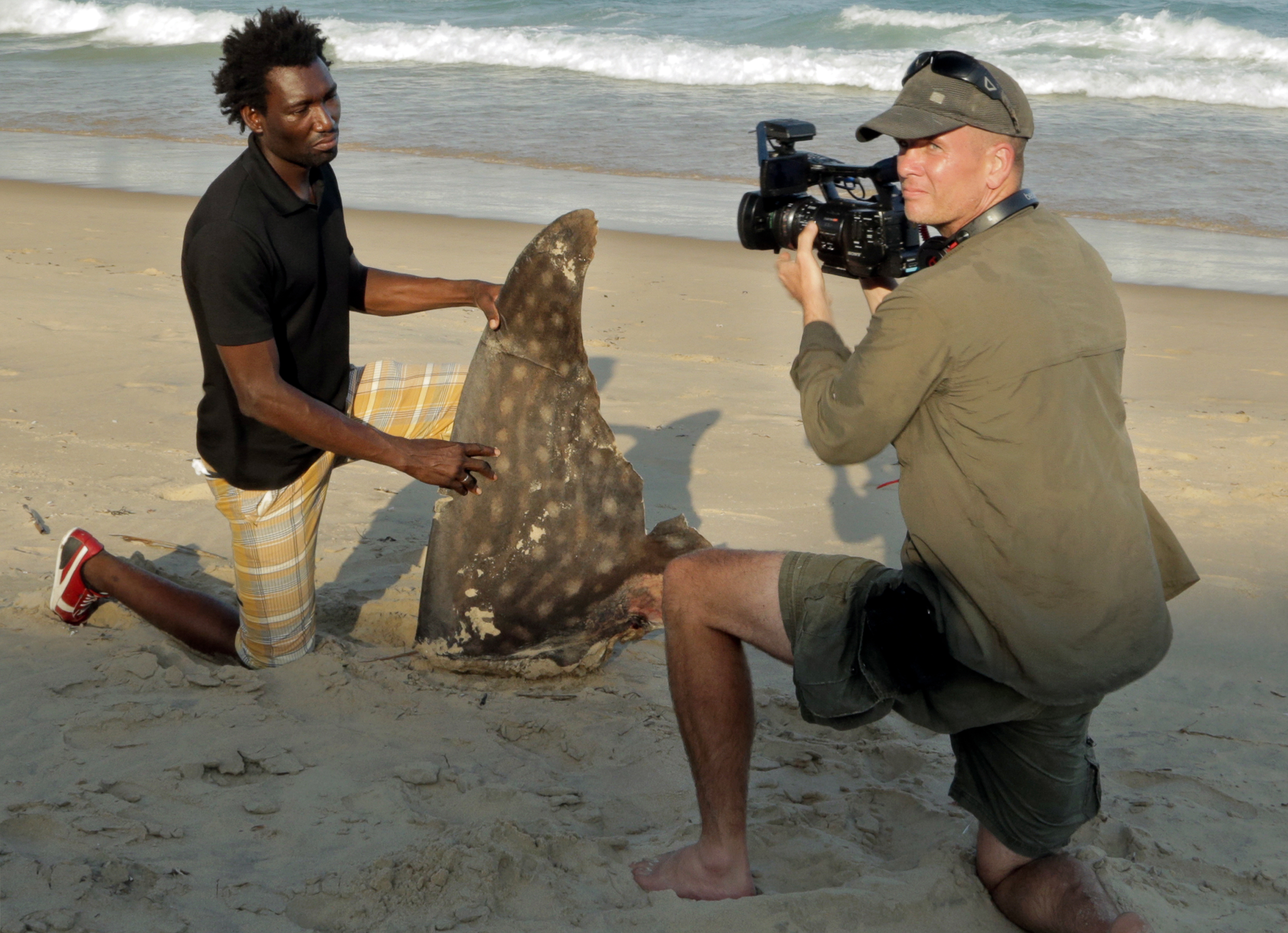 Who is Mother Ocean aimed at and how many languages has it been translated into?
The film is aimed primarily at a Mozambican audience. Consequently, the film will be in Portuguese [the national language], as well as in the regional dialect of Bitonga. There will also be a third version of the film with English subtitles for an international audience.
The film will be screened by partner organisations as part of their outreach projects in local fishing villages, schools and towns. We also plan to have it shown on national television and screened to key decision-makers at events around the country.

Can you describe one of your favourite moments during the making of Mother Ocean?
For me, the highlight was the opportunity to go up in a microlight to film. To see this stunning coastline from a different perspective was breathtaking. 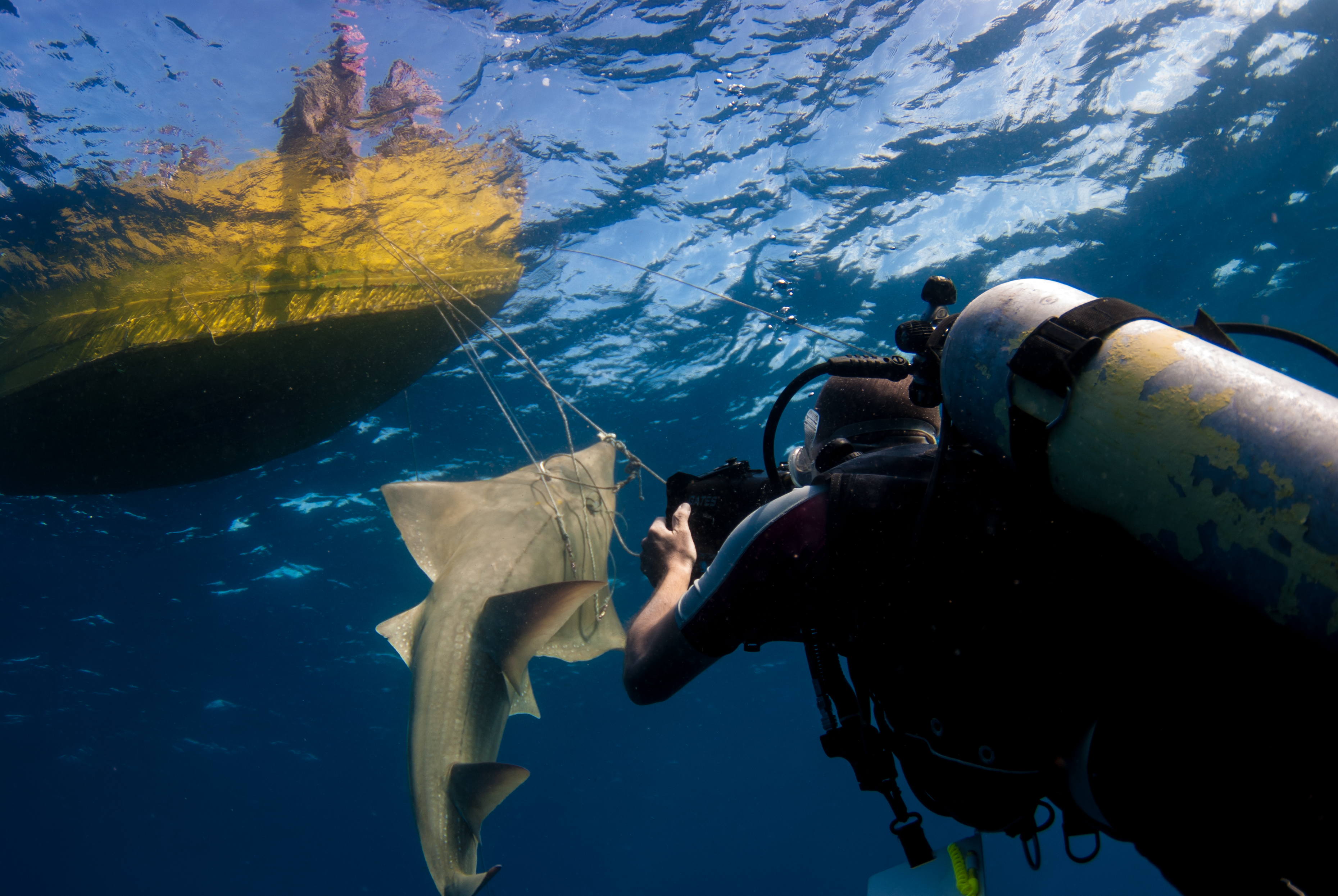 How did you find out about the declining numbers of whale sharks and mantas at Inhambane?
Having lived and dived in Inhambane Province for many years, I unfortunately saw this steady decline with my own eyes. When I first arrived in 2007, sightings of manta rays and whale sharks would occur most days, but as the years went by, they became much less frequent. Weeks, or sometimes even months, would pass between sightings.
However, the scientific data of the Marine Megafauna Foundation worryingly exceeded even the most pessimistic predictions:
‘Sightings of whale sharks have decreased by 79% in Mozambique since 2005.’
‘Sightings of manta rays have decreased by 88% in Mozambique since 2003.’

Has the decline in marine megafauna affected Tofo’s tourism industry?
I think the decline in megafauna has definitely had an impact on international dive tourism. Tofo was once one of the best places in the world to see manta rays and whale sharks year round. Sightings were so predictable that some tour operators would offer a money-back guarantee on your holiday if you didn’t see either a whale shark or a manta ray on your dive vacation. No operator would dare to do that now, and while Tofo is still a great place to dive and relax, the lack of consistent sightings of these drawcard species undoubtedly puts some divers off. 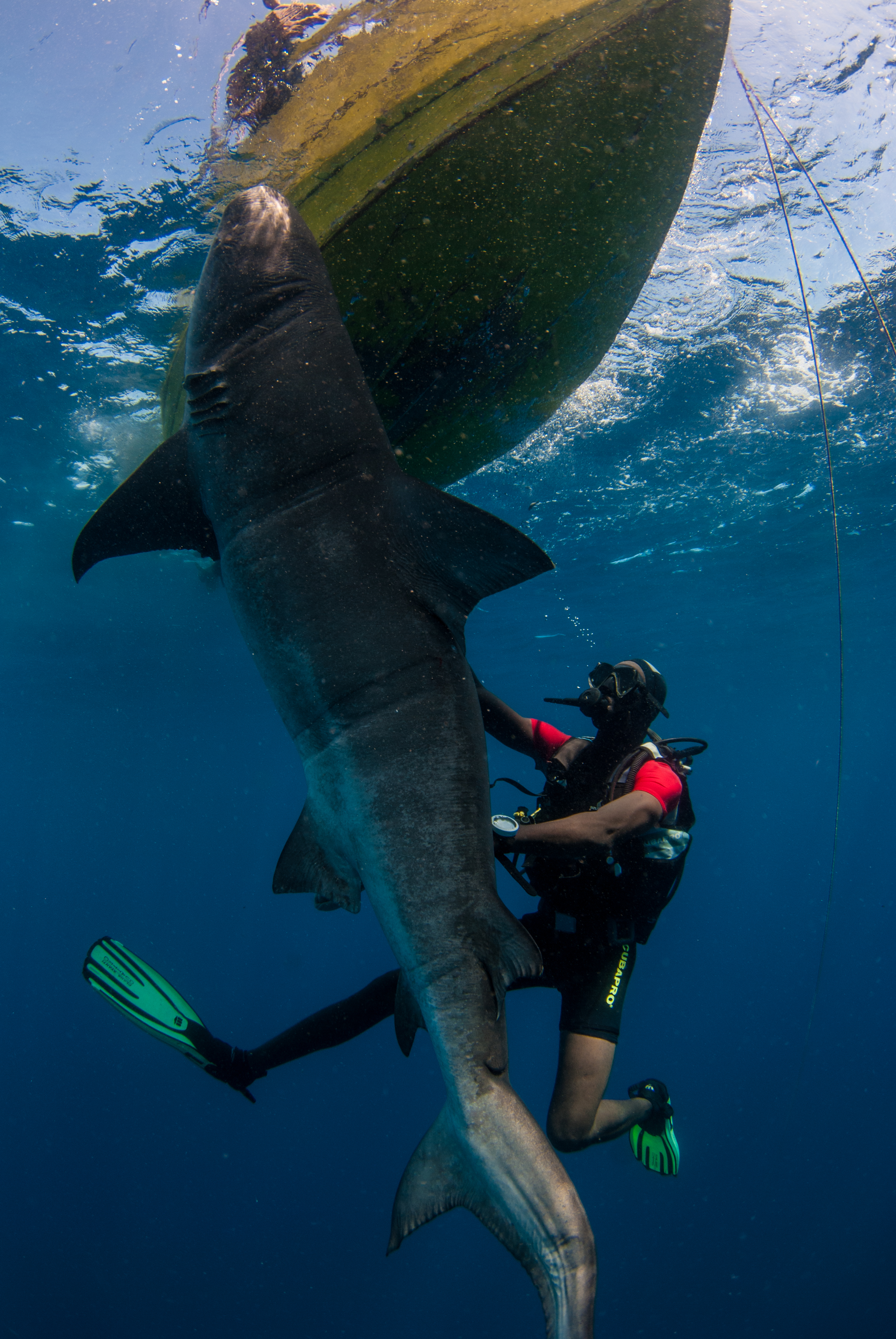 Has the gill-raker trade reached Mozambique yet?
I myself did not see any evidence of the gill-raker trade in Mozambique, even though I spent lengthy periods living with and filming local communities who fished in areas with high numbers of manta rays. But I have heard from other friends and scientists that they have seen evidence of the trade. Fortunately, though, it does not appear to be on the scale that you find in other countries.
Personally, I see the rise in the use of gill nets as a much more pressing issue, as the nets are often set in areas where manta rays and whale sharks congregate. This leads to accidental entanglement and in many cases the death of the animals.

Local fishing communities are struggling to earn a livelihood. How do you think Mother Ocean will be able create a positive shift in their behaviour?
I am a big believer in conservationist Baba Dioum’s philosophy that ‘In the end we will conserve only what we love; we will love only what we understand; and we will understand only what we are taught.’ I hope the film will play a part in achieving this.
I also hope that the film will make local fishing communities consider the use and placement of gill nets, especially in areas where manta rays and whale sharks are known to congregate. 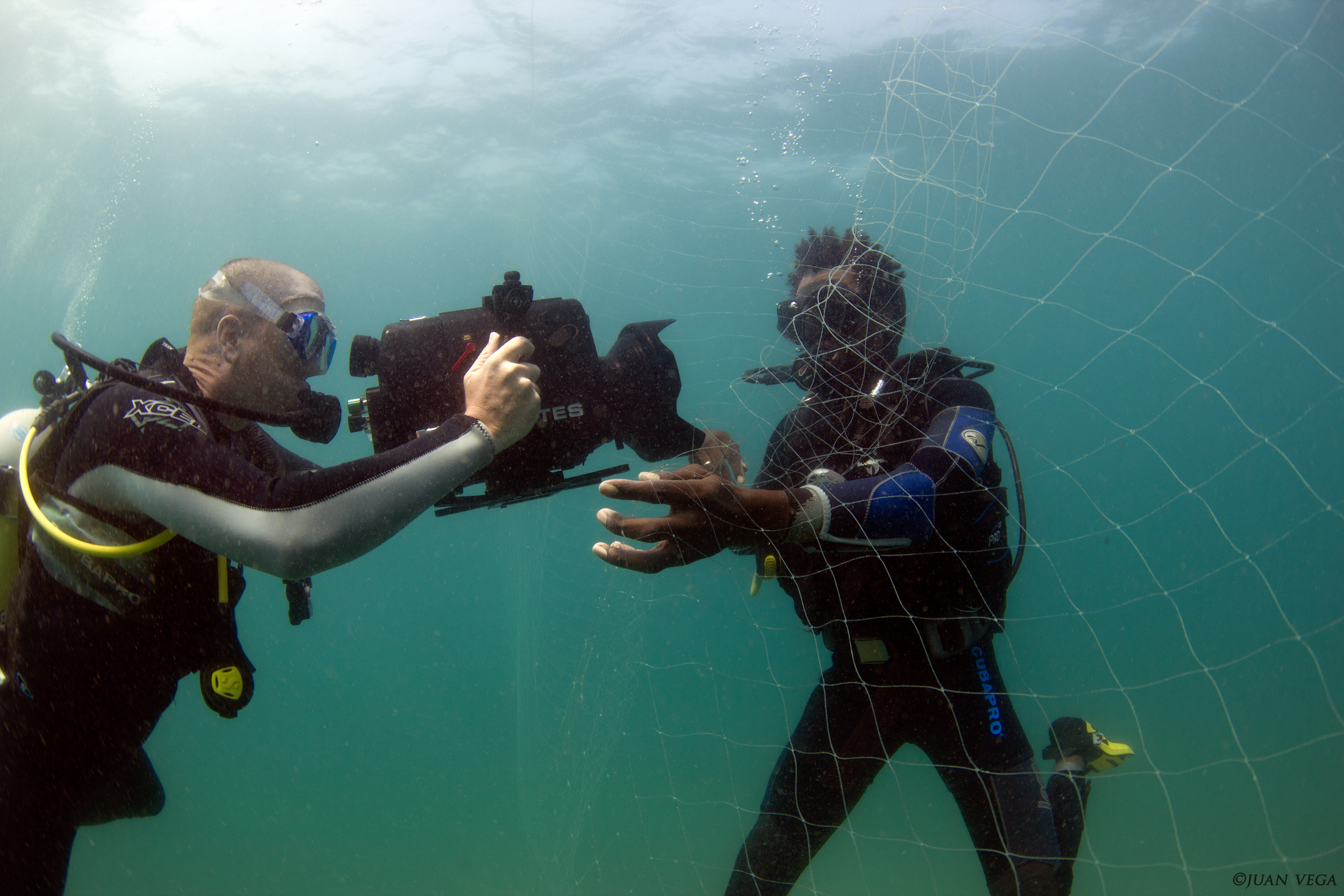 Are Mozambique’s existing marine protected areas proving to be a success?
Mozambique has made huge efforts in recent years to create a series of marine protected areas. This in itself is a big step forward. However, to be truly successful, more needs to be done to enforce existing laws and for local communities to see direct benefits.

What are you hoping that the film will achieve?
We have three main goals for the film: