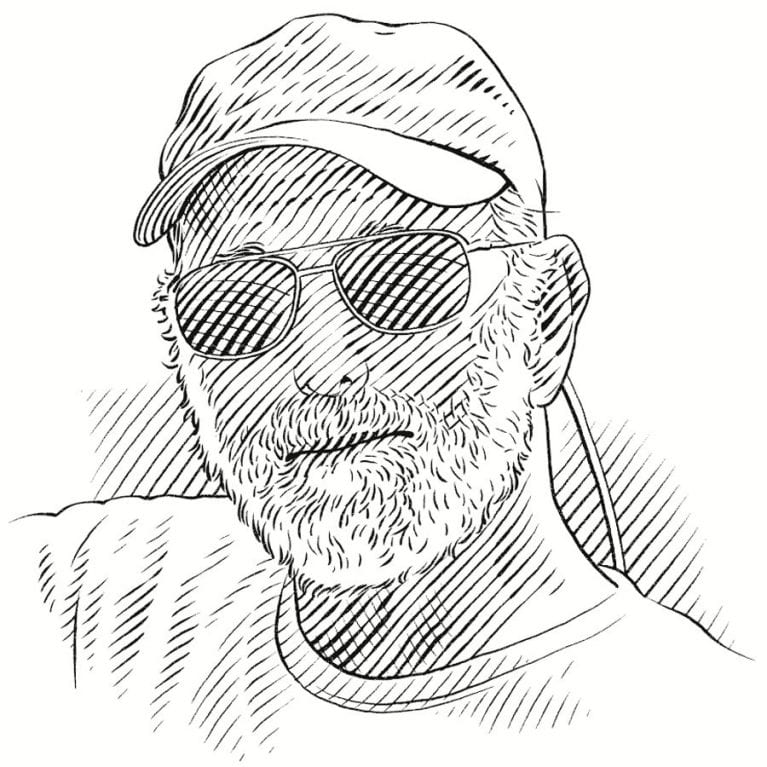 As a child in the late 1940s, I was what we in Miami called a ‘water baby’. I used to go down to the docks and look at every fish that was brought in. While the other kids were playing baseball, I was out there looking for sharks and fishes and walking the beaches for miles, collecting seashells. At age 12 I taught myself to scuba dive, and when I was a teenager we used to sail out to the reefs on an 80-foot schooner and spend the weekend on a reef, feasting on the fish we had speared.
My interest in the marine world became exponentially more entrenched when I was 20. Back in the ’50s I paid seven dollars for a ticket on the Blue Goose, a World War II-era schooner that crisscrossed the waters off Miami Beach. I took along my mask, snorkel and spear gun for some fishing in the reefs around Fowey Rocks. One day I was taking aim at a grouper under a rock when I met with the most terrifying sight. I saw this submarine. In fact, it was a huge hammerhead shark, looking about 150 metres long though it was probably more like four. It was only five metres away and there was blood in the water from the fish I had just speared. I thought I was dead, but the hammerhead swam calmly past me. In hindsight I doubt that the shark thought anything about the encounter, but the experience changed my career instantly from pre-med to marine biology.

You will find me on the tiny island of South Bimini in The Bahamas. I founded the Bimini Biological Field Station, which many people know as the ‘Shark Lab’, in 1990.
In 1492 Christopher Columbus referred to the seas surrounding the Bahamas as ‘baja mar’, meaning ‘low water’ or ‘low sea’. The islands thus became known as The Bahamas, or ‘The Islands of the Shallow Sea’.
Known as the gateway to The Bahamas, the small islands of Bimini are located less than 80 kilometres from Florida, USA. The warm, clear waters washing their shores flow from the Gulf Stream up onto the Great Bahama Bank. Since the early 1920s, Bimini has become known as a destination for adventurers, travellers and smugglers from all parts of the world. When Pulitzer Prize-winning author Ernest Hemingway found his way here in 1935, he was so enthralled with Bimini that he used it as inspiration for his last book, Islands in the Stream.
It’s not just the bright blue seas or chalk-white beaches that make Bimini a great place for field research. The archipelago supports a diversity of marine habitats varying from mangrove forests to coral reefs that slope to the deep pelagic zone of the Florida Current to the west. These habitats are a perfect home to the sea creatures that have captivated me for the past 50 years. Dive in the waters surrounding Bimini and you could meet a number of ray and shark species, including tiger, Caribbean reef, lemon, blacktip, bull, blacknose, nurse, big-eye sixgill, silky and night sharks, smalltooth sawfish, eagle, sting and manta rays – and my old friend, the great hammerhead shark.

I first got into shark research through fear and wonder, but the more I studied sharks, the more I realised how amazing these creatures are. Most of my studies have focused on the lemon shark. I spent the first 15 years of my career researching vision in this species and discovered that it has one of the most sophisticated visual systems in the sea. This shark’s eye possesses unique structures and capabilities.
It has a large and pretty amazing brain too. During my doctoral studies in the 1960s I learned to ‘speak’ to sharks. I trained them to answer very simple questions by winking to say ‘yes’. I discovered that a lemon shark can learn a simple conditioned response 80 times faster than a cat or rabbit can when given the exact same task, and it can remember such tasks for more than a year. Incredibly, individual lemon sharks had different personalities and IQs; some were left-handed (or -finned) whereas others were right-handed. It turned out that there are all kinds of advanced features about sharks that one would never have expected. And today we are actually studying the personalities and cognitive capabilities of our little lemon sharks.
Sharks aren’t gods and they’re not devils. I regard them as true lords of time. They’ve survived multiple extinction episodes when most marine animals have disappeared. They’ve had the strength and adaptations to come back time and time again, and they’ve been around probably longer than most animals with backbones – nearly half a billion years! But now humans, the super-predator, threaten to undo the half-billion-year reign of sharks. And the sad fact is that we’re killing them off to make soup out of their fins!
I always tell my students that we need sharks more than they need us. Fishers say sharks compete with us by eating the same species that we do. In reality, sharks keep the commercial fish stocks healthy and under control.
Following your dream is not always easy, especially when much of it plays out under water. I often wish I could fit my research station with a new solar-operated, hurricane-proof facility and not have to worry about where my next grant is coming from – indeed, where the groceries to feed all 18 of my staff are coming from. But the truth is that I have never wanted to do anything other than what I do. I love teaching up-and-coming students who want to use sharks as models for their research.