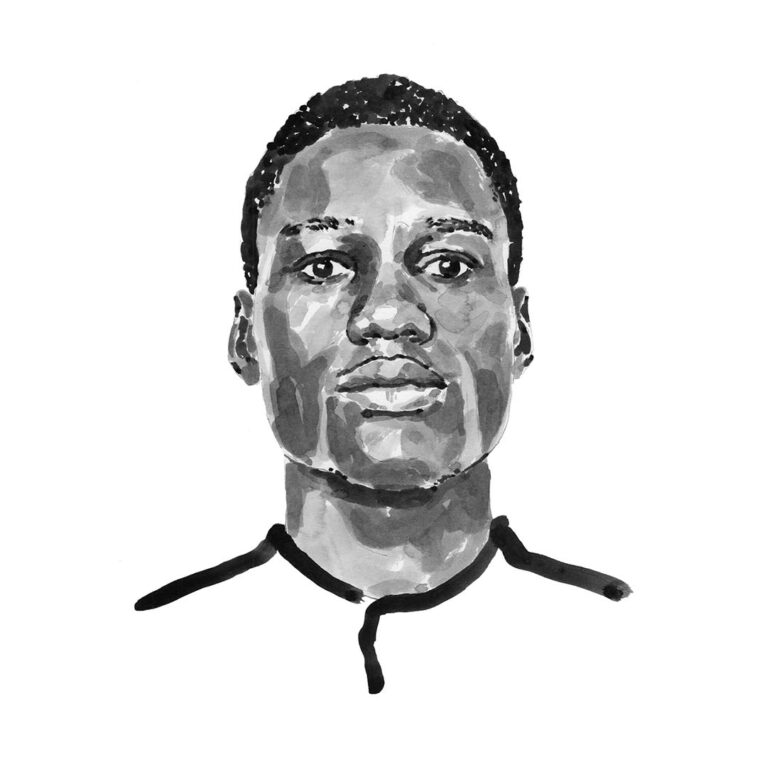 I’m an early-career marine ecologist working in Cameroon with the Institute of Agricultural Research for Development. I have a Master’s degree in marine science from the University of Douala. For as long as I can remember, I have been fascinated by marine life. I was a huge fan of the National Geographic shark documentaries when I was growing up and fell in love with these charismatic ocean predators that to me embodied all the strength and power that other kids of my age saw in their favourite superheroes. The idea of a career in marine conservation occurred to me when I was a BSc student, and I didn’t realise then that it would have such a profound impact. Initially, I worked as an intern with a local conservation NGO and after that, I volunteered in a marine conservation programme, monitoring sharks at landing sites and fish markets along the coast. This experience led me to understand the real threats to these species in the area, threats that are linked mainly to artisanal and semi-industrial fishing activities, and to the negative reputation they have in media worldwide. As I learned more about sharks, I realised that these large predators that I admired so much in my childhood had now become defenceless prey. I then decided to devote my career to protecting them. Lack of data is the main issue preventing policymakers from improving the current wildlife legislation that can ensure the long-term conservation and management of sharks and rays in my country. Over the next five years, I plan to fill this data gap by providing input that will improve knowledge about the diversity, occurrence, distribution, and threats to sharks and thus be recognised as a leader in this field in Cameroon.

My field of study is the Gulf of Guinea in Cameroon, where I was born and where I have spent a large part of my life. Cameroon’s coast is 400 kilometres (250 miles) long and has the Federal Republic of Nigeria, Equatorial Guinea and Gabon as its neighbours facing the Atlantic Ocean. Currently, my research is centred on a 160-kilometre (100-mile) stretch of the north coast at the foot of Mount Cameroon, the highest mountain in central Africa and one of the few volcanoes still active on the continent. This place hosts important habitats for sharks and rays, such as mangroves and coral reefs, and is currently a proposed marine protected area.

My current work focuses on research into, education about and conservation of elasmobranch species, including sharks and rays. The study aims to assess the local conservation status of sharks and develop a greater understanding of them in this area. The overall goal is to provide decision-makers with a baseline of shark and ray occurrence data in Cameroonian waters to help improve wildlife laws that can ensure the species’ long-term conservation and management. Because research into elasmobranchs is at an early stage in the country, data are quite scarce and the species and the threats to them are poorly documented. I’m currently using fishery-dependent methods, including species monitoring at landing sites and fish markets, as well as traditional ecological knowledge by means of interview surveys and questionnaires, to assess elasmobranch diversity, occurrence and threats and to evaluate local perceptions of sharks and rays. Unfortunately, assessing shark catch at landing sites can only take into account species that are officially reported, but there are many others that are not formally recorded every year and are therefore not assessed and documented. I’m planning to go further in the near future by using baited remote underwater video stations (BRUVs), a fishery-independent method that will give me a better understanding of the species’ diversity and their spatial distribution in the area.

Lionel is gaining insights into Cameroon’s sharks and their conservation status. His focus lies on the country’s north coast, a stretch that runs for more than 160 km at the foot of Mount Cameroon, central Africa’s highest mountain and an active volcano. The region Lionel is researching hosts critical habitats for sharks and rays and is a proposed marine protected area. He is scouring landing sites and fish markets, and gleaning traditional ecological knowledge through interview surveys and questionnaires. His goal is to provide decision-makers with a baseline of shark and ray occurrence data to ensure their long term conservation.