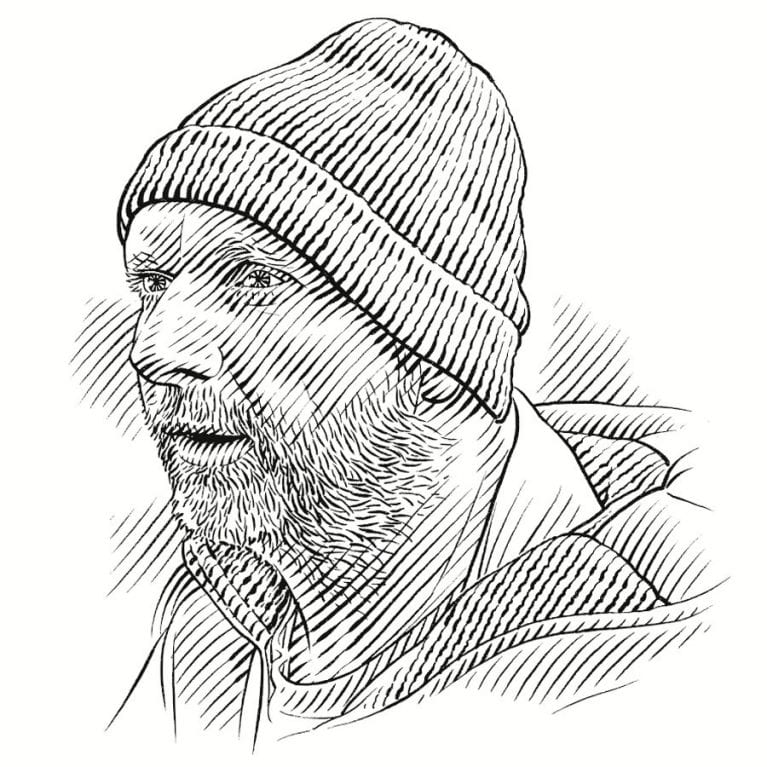 In 2001, with the permission of the First Nation Village of Hartley Bay, we built on Gil Island the first and only marine facility (Cetacea Lab) along the remote north coast of British Columbia in Canada. We are the only two people who live on this island; the closest town for supplies is four hours away by boat. It’s a precious area, and we hope to have it designated as critical habitat for whales.

Hermann and I established a network of hydrophone stations in the surrounding waters that, minute by minute, transmit the underwater world of whales back to the lab. This unique structure has enabled us to collect an acoustic library of individual orca and humpback call types. When not in the lab recording whales’ calls, we are on the water collecting photographs of each individual orca, humpback and fin whale so that we can better understand the species’ social bonds.
In 2008 we installed a hydrophone station in Caamano Sound, not knowing at the time that we were about to discover an acoustic window into an unexplored marine corridor that was a gateway to orca activity. Resident orcas live in permanent family groups in which the oldest female is the matriarch. Because they live so close to one another, each family group has developed its own unique dialect. With our network of hydrophones set up throughout the research area we are able to identify and track the movement of orca families just by listening! By the end of the first season of listening to hundreds of hours of orca communication we knew that Caamano Sound must be designated as critical habitat for the species. Our next goal was to combine all acoustic information with visual sightings.
Wolves, bears and a variety of sea mammals are the only inhabitants of the remote island where the hydrophone station is located. Here, along the rugged coastline of the Great Bear Rainforest, the weather can change from flat calm to storm-force winds and six-metre waves within hours. This place is wild and not always accessible by boat. We had to find a way to track the movements of whales but at the same time remain safe. So in 2009, with extremely limited funding, we built a very basic shelter at Ulric Point on this uninhabited island.
Most of that season I went weeks without seeing another person, slept in a tent, powered the radio – my lifeline to Cetacea Lab – with a small solar panel, and kept my food in barrels suspended from trees to protect it from wolves and bears. My favourite companions were two eagles that were nesting close by, a curious family of mink and my precious scope to search for orcas. The mornings were cold and often extremely wet (hence the name rainforest), but this was soon forgotten when a family of orcas would pass close to shore, the sound of their blows echoing through the forest. On the rare occasions that they recognised this lone person on the shore and slowly approached, making direct eye contact with me, time would stand still. All that mattered was that moment, and I was reminded why this intelligent and gentle creature had stolen my heart so many years ago.
I always had either a camera in my hand to take pictures for identifying individuals or the scope to observe the orcas’ travel patterns, whether they were feeding and all groupings between families. The first season was a huge success and the high number of orca sightings made every moment of hard work worth it.
We also had to find a way to collect fish scale samples to determine the orcas’ exact prey source when they were foraging. A major step towards this goal was achieved in 2010, when the Gitga’at First Nations decided to join the efforts of Cetacea Lab and teamed up with us to conduct boat surveys whenever orcas were sighted from Ulric Point. This collaboration has become a key component in successfully gathering the necessary data to protect orca habitat.
The living conditions at the remote camp remained extremely basic and the equipment used for collecting the data was partially owned by third parties. It was also imperative that we could bring in a number of interns to participate; safety was a concern and the hours were long for just one person. All of that changed for the 2012 season when the Save Our Seas Foundation decided to fund this important research project. Everything from better camera equipment to viewing scopes and alternative energy sources has enabled us to continue on our path to understanding orca movements and sacred bond these animals have with each other and their habitat.
We hope that with continued funding we will have sufficient data in the next few years to convince the Canadian Federal government to declare Caamano Sound as critical habitat for resident orcas.