This year, it is already the Tenth Palau Shark Week, and of course it is again sponsored by Save Our Seas.

Dr. Charlie Huveneers is representing Save Our Seas this year. Read his first report below!

I’ve just returned from my second day of diving as part of the 10th Palau Shark Week, which runs from the 15th until the 20th of March. In the last couple of days, I have seen four different species of sharks and dived in some of the most beautiful and famous dive sites of the world. I wasn’t alone and shared this experience with 50 divers who came to Palau especially for Shark Week and who came from all around the world including Latvia, Russia, France, Belgium, Australia, the USA, Guam, and the UK.

Following my first day of diving, Palau Shark Week was officially opened by Palau’s Vice-President who re-iterated the importance of sharks to Palau. This was recently officially recognised in 2009 when Palau became the World’s first shark sanctuary. The importance of sharks to Palau and Palauans is obvious as soon as you step out of the plane from the several signs and banners highlighting the shark sanctuary and opportunities to dive with sharks.

Shark Week has now been organised for 10 years by the hard work of Tova Bornovski, co-owner of Fish’n Fins. While running a successful diving operation, Tova has dedicating her time and effort to shark conservation and founded the Micronesia Shark Foundation in 2002, which aims to protect, research and monitor Palau’s sharks, and promote community awareness, youth education and involvement throughout the Micronesian region.

My role here is to provide some scientific information about sharks and the role of wildlife tourism to Shark Week participants. I will be giving a talk tonight which will hopefully give the divers a new insight into the biology and ecology of sharks, will increase the divers’ passion for sharks and the drive to ensure the long-term sustainability of shark populations.

I’m excited to be here thanks to the support of the Save Our Seas Foundation and will provide another blog later on to give more information about the shark sighted during our dives and the other events of Shark Week. 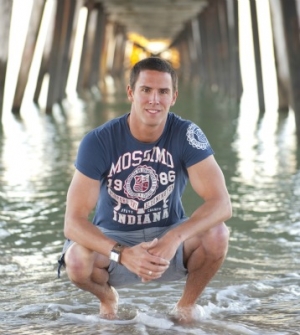 Doctor Charlie Huveneers has been involved in Chondrichthyan research for over 10 years. Research collaboration has brought him to study various species of sharks at several locations around the world. These include projects on basking sharks, white sharks, Carcharhinus sharks, grey nurse sharks, lemon sharks and leopard sharks.