Every year, Save Our Seas supports the Palau Shark Week. And this year, it was an anniversary: the 10th edition!

Save Our Seas was represented by scientist Charlie Huveneers. Read his report below!

Shark Week was a combination of some of the world’s best diving during the day and stimulating talks in the evening. As mentioned in my previous blog, the first night was the opening night during which Shark Week organiser, Tova Bornovski, summarised the purpose and motives of Shark Week prior to Palau’s Vice-President officially opening the week ahead. On the second night, I had the opportunity do a presentation and talked about the issues of the negative perception and representation of sharks. I also provided some information about the roles and challenges of wildlife tourism in general and how it applied to shark diving. Quite topical considering the diving that we were doing in Palau everyday and that most divers here decided to come to Palau for the sharks. 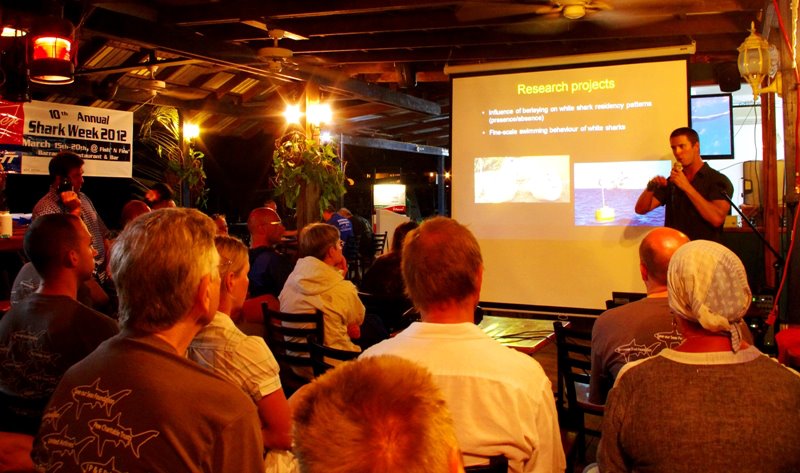 Dr. Conrad Speed and Tova gave a joint lecture on the third night during which Dr. Speed presented some of the most recent results of the collaborative acoustic telemetry project undertaken on the Palauan resident grey reef sharks. This was accompanied by Tova describing the work that the Micronesia Shark Foundation has been undertaking since 2002, with the support of the Save Our Seas Foundation, highlighting the main outcomes and future work that they will be focusing on. It was the Micronesia Shark Foundation which pushed and made Palau one of the World’s first shark sanctuary in 2009. The Foundation is also increasing community awareness of the importance of sharks and has recently expanded to other Micronesian islands as well as Palau. With the collaboration and funding from the Save our Seas Foundation, they have also produced a colouring book which will be distributed to school throughout the Micronesian islands during the the new shark education initiative (see also https://saveourseas.com/blog/sosf_and_msf_shark_education_in_micronesia).

Angelo O’Connor Villagomez was the guest speaker on the fourth night. Mr. O’Connor Villagomez works but the PEW Environment Group’s Global Shark Conservation Campaign but is also the Senior Editor for Shark Defenders. During his presentation, he took Shark Week participants in a tour of the most recent shark conservation progress in Palau, Saipan, and Yap. The Pew Environment Group is a conservation group which, amongst other, aims to influence the fishing nations and treaty organisations, and to advocate for international shark conservation. Mr. O’Connor Villagomez also highlighted that the prohibition of shark finning might not specifically reduce the amount of shark fishing, but that it is the targeting of sharks and amount of sharks caught as bycatch which need to be better regulated. On the second last night, Dr. Drew Richardson, President and Chief Operating Officer for PADI and Chairman of Project AWARE, provided some information about shark conservation and the importance of international treaties and conventions such as the Convention for Migratory Species (CMS) and the Convention for International Threatened and Endangered Species (CITES). Dr. Richardson finished his presentation by providing some information on how recreational divers could participate and contribute towards providing important information and help towards shark conservation.

Shark Week finished with an incredible gala dinner which was attended by nonetheless than Palau’s President, showing how much Palau’s political system recognises the importance of sharks for the country. 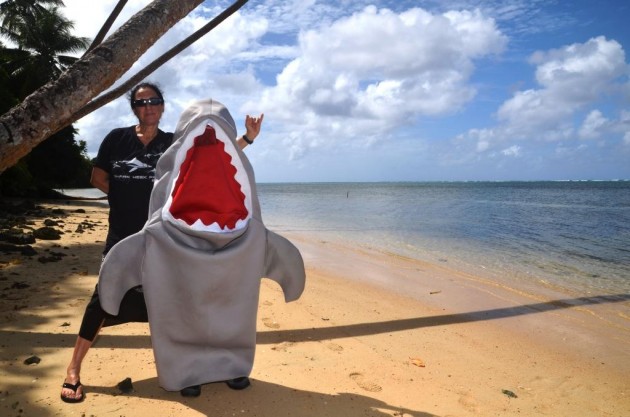 Tova Bornovski and ‘Finny the Funny Shark’ at work in Micronesia.

Huge thanks to Tova and Fish’n Fins for their hospitality and being such amazing host. I would also like to thank the Save Our Seas Foundation for giving me the opportunity to go to Palau and increase shark conservation awareness to the 50+ Shark Week participants.