Meet the creatures of Bimini

We have always loved the fun and informative poster below, created by Rohan Chakravarty (who some might recognise as Green Humour) for our partners Bimini Biological Field Station Foundation (BBFSF-SharkLab). Inspired by the poster, we reached out to the SharkLab team and asked for their help putting together a little more information on some of the infamous animals, and their less famous counterparts, found on and around these two small Bahamian islands. 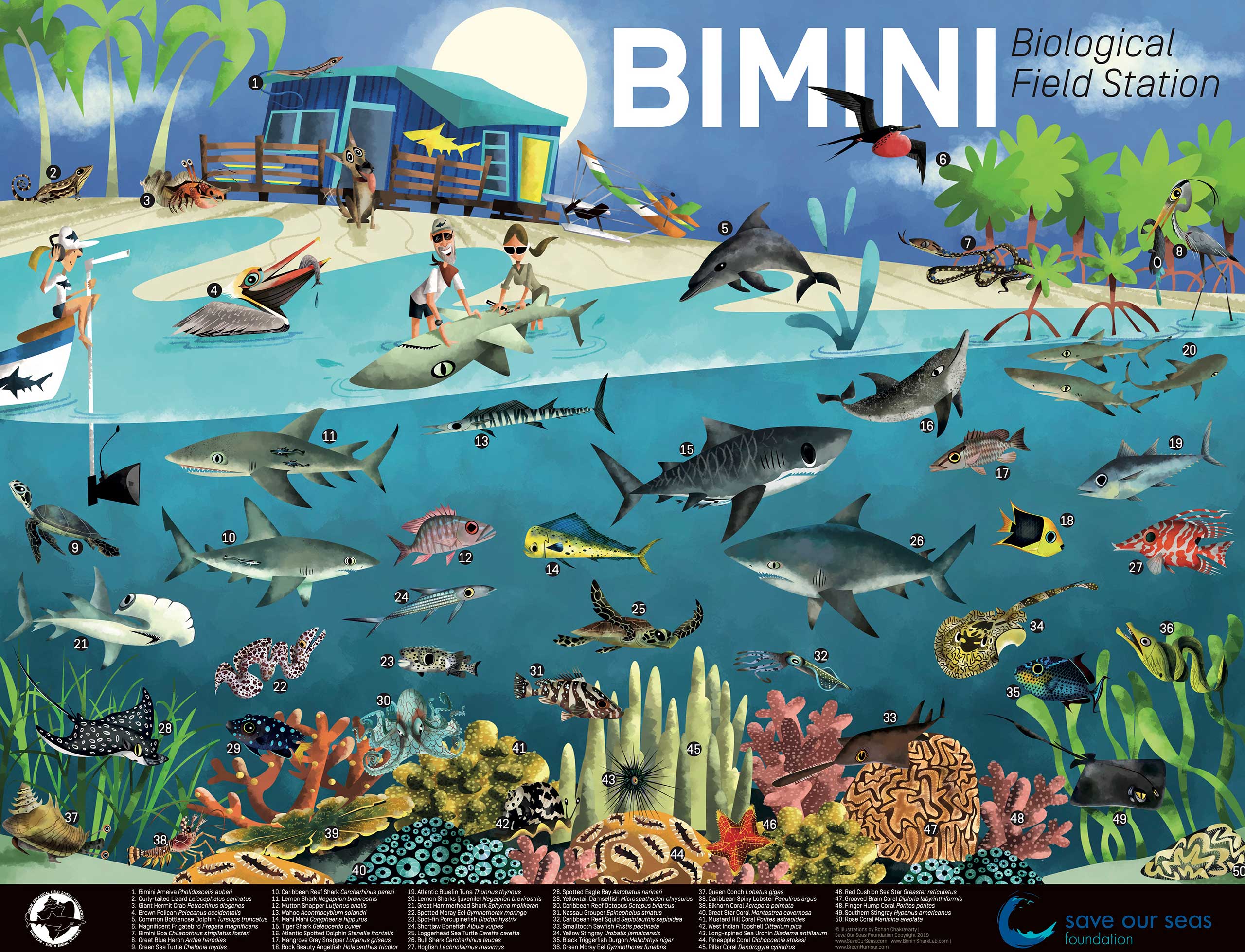 Artwork by Rohan Rohan Chakravarty | © Save Our Seas Foundation

Despite their relatively small size, the two islands that makeup Bimini are surrounded by a multitude of habitat types. Ranging from a shallow lagoon to the deep waters of the gulf stream, or coral reef structures to elaborate mangrove forests, a high diversity of marine fauna easily traverse multiple habitats, creating an environment filled with intricate species relationships. The connectivity between habitats is such that prey options for large animals is diverse in a concentrated area. Highly migratory species that typically spend their time in the open water along continental shelves are able to enter the shallows at the high tides and chase after prey in less than 2 meters of water. Consequently, animals are exposed to a wider range of predatory interactions, facing increased risk from predators outside of their traditional habitats. These interspecific relationships created by predation form an intricate food web that makes determining trophic levels no easy task. While it may seem a simple concept, the food web is, in practice, an incredibly complex system of dynamic relationships and changes that occur within an ecosystem. The more interactions between species, the more elaborate and muddled the food web becomes. And in the ocean, where few physical barriers exist, the opportunity for interspecific interactions is magnified. At the Bimini Shark Lab, not only do we have the ability to research within these habitats, but we have the opportunity to develop a deeper understanding of predator-prey interactions. 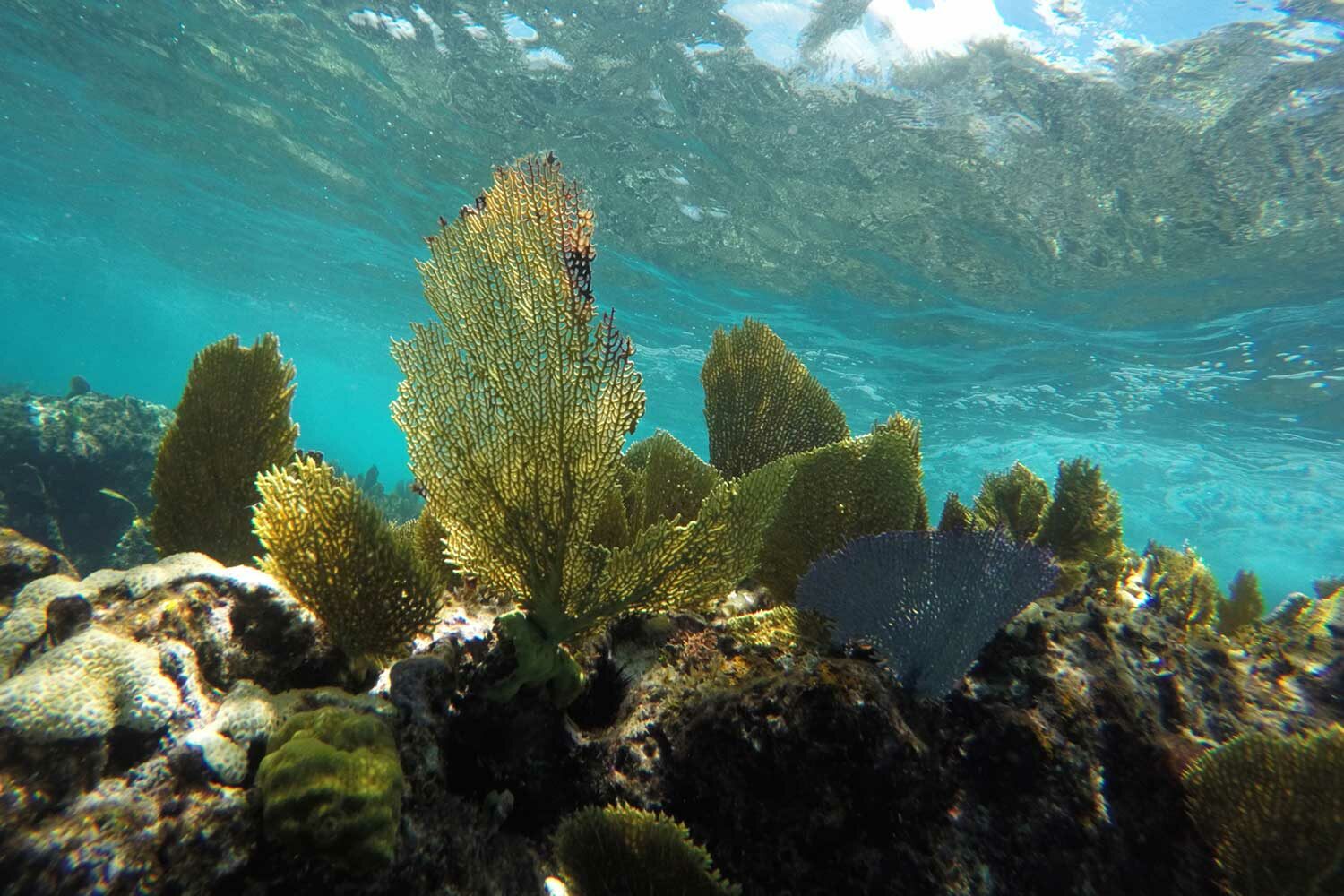 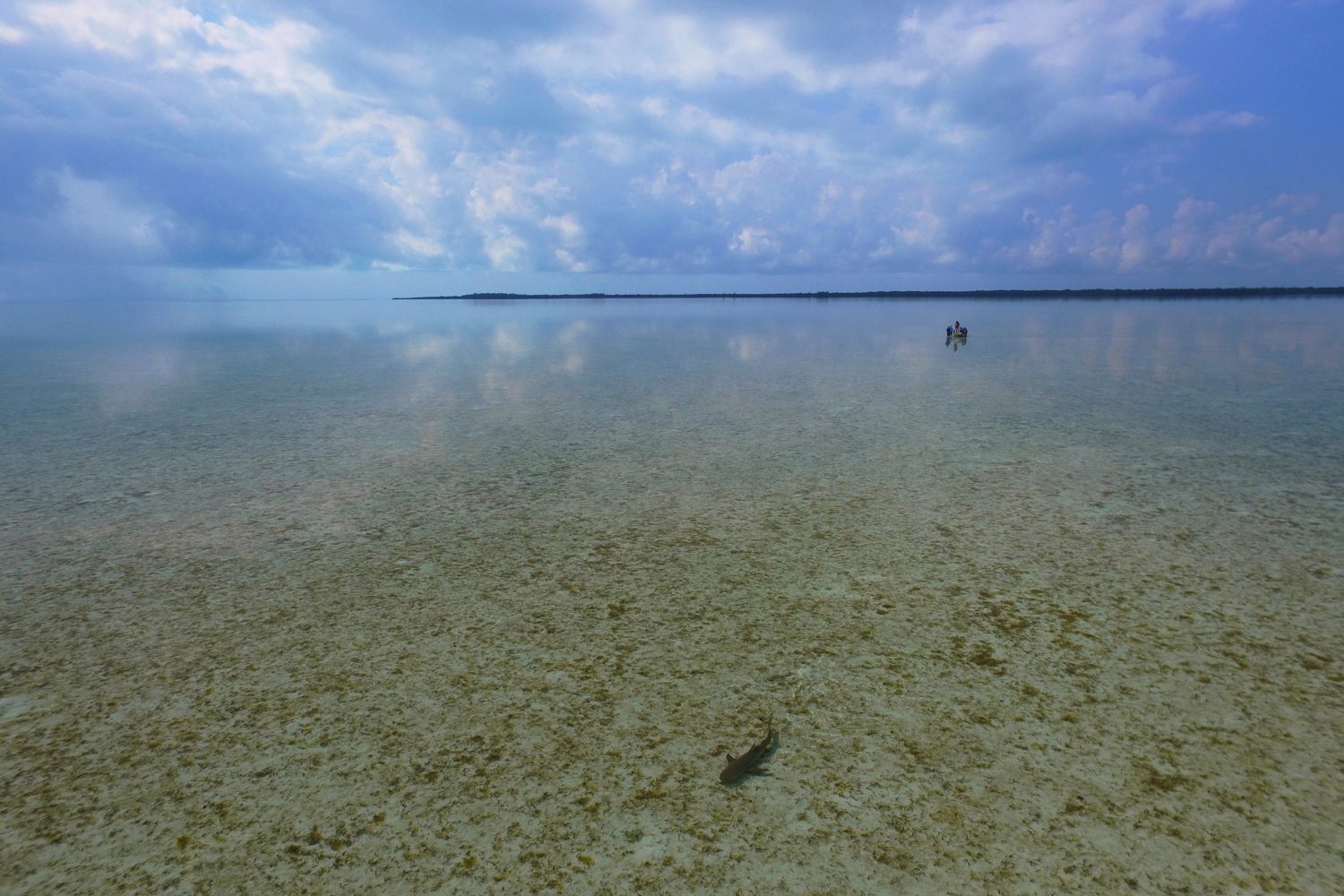 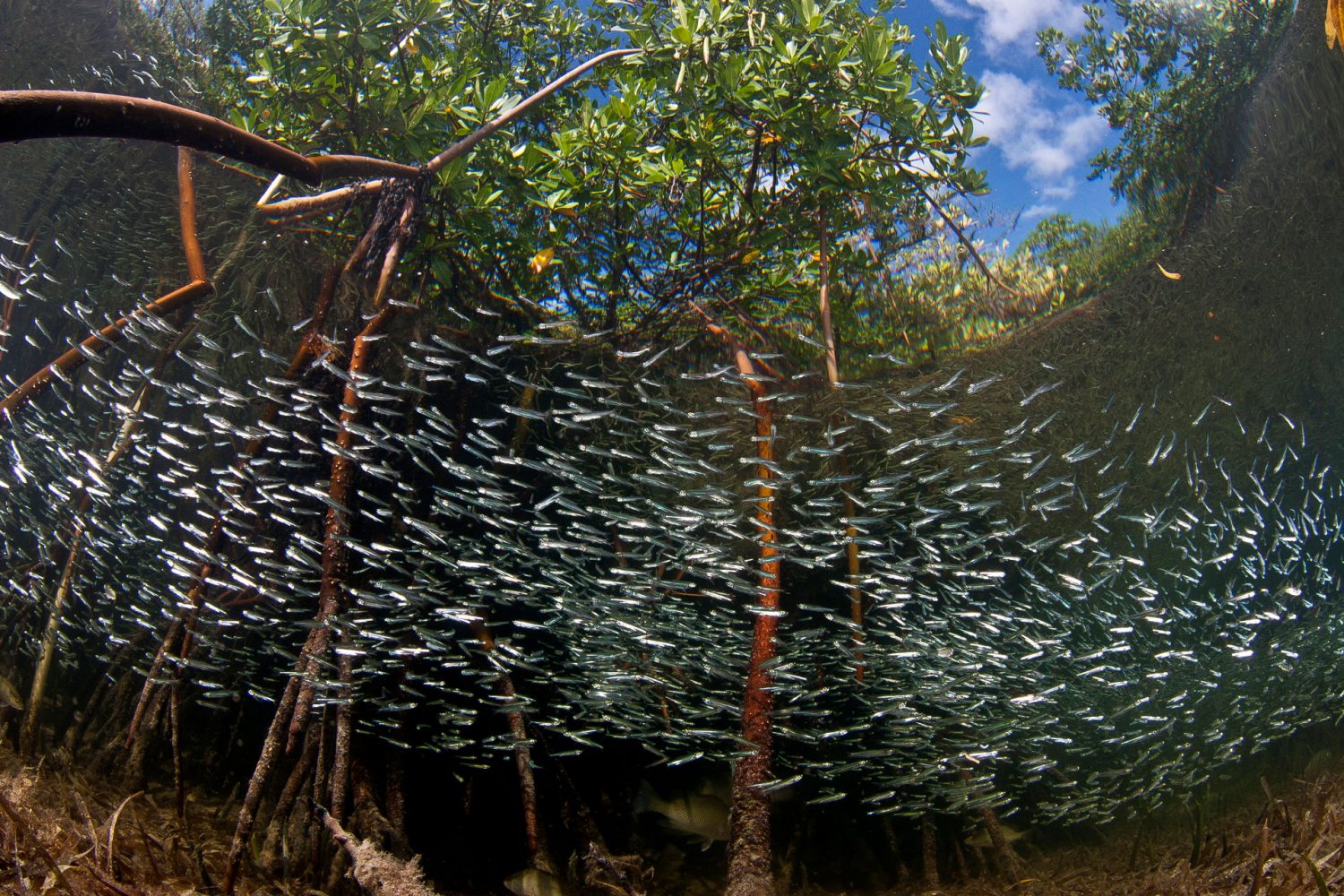 One interesting aspect of predator-prey interactions is observing how both have responded evolutionarily to better escape or consume the other. Evidence of such adaptations can perhaps best be observed in the great hammerhead (Sphyrna mokarran), that prefer to consume batoids such as eagle rays and stingrays. The great hammerhead has a ventrally located mouth, rather than towards the front of its snout like some other apex predatory sharks. Its large cephalofoil, the uses of which are still being discovered, can assist in catching prey in two ways. Firstly, the ampullae of Lorenzini dispersed along the ventral side of the cephalofoil allow the hammerhead to scan under benthic substrates like a metal detector, searching for electrical impulses emitted by fish. Then, once its prey is located, the great hammerhead can use its hammer to stir up sediment, initiate movement in the prey, and pin it to the sea floor while its well-placed mouth lands a debilitating bite. Around Bimini, the southern stingray (Hypanus americanus) is a common prey species for great hammerheads, a predatory interaction that has on rare occasions been observed in action by the Shark Lab. Stingrays often conceal themselves from predators by burying themselves just below a layer of sand, lying motionless until they are disturbed. Unfortunately for the stingray, the great hammerhead can still detect its electrical impulses, despite its expert hiding. Even the stingray’s last line of defense, a venomous barb located at the base of its tail, does nothing to deter the apex predator. Despite the fact that some of the great hammerheads around Bimini exceed 4 meters in total length, this large apex predator will venture into the shallow seagrass beds and sand flats to pursue southern stingrays to the point where its dorsal fin is exposed.

One of our most commonly encountered species, the Atlantic nurse shark (Ginglymostoma cirratum), looks very different from the shallow water Carcharhiniformes we usually come across. Aside from the other morphological characteristics that allow the nurse shark to comfortably inhabit rocky ledges, its mouth is perhaps its most distinguishing feature. In fact, its scientific name Ginglymostoma cirratum refers directly to this: the genus “ginglymostoma” is derived from the Greek language meaning “hinge mouth”, and the species “cirratum” comes from the Latin word “ringlets”, referring to the barbels dangling in front of the nurse’s mouth. Those catfish-esque barbels are in fact chemosensory appendages that the nurse uses to locate prey, akin to having an advanced sense of smell. Just behind the barbels is an incredibly powerful mouth, which works by creating an intense vacuum-like suction, rapidly sucking in prey and crushing it with powerful hinged jaws. It’s this special adaptation that allows the nurse shark to feed on a variety of hard-shelled invertebrates, including the queen conch (Lobatus gigas). As anyone who has accidentally stepped on a conch shell can tell you, their incredibly hard external structure is nearly inpenetrable, and is certainly sufficient protection against most predators. That is, except for the nurse shark. Its specially adapted mouth is able to vacuum-suck the gastropod from its shell in the blink of an eye, instantaneously overcoming all of the conch’s defenses. 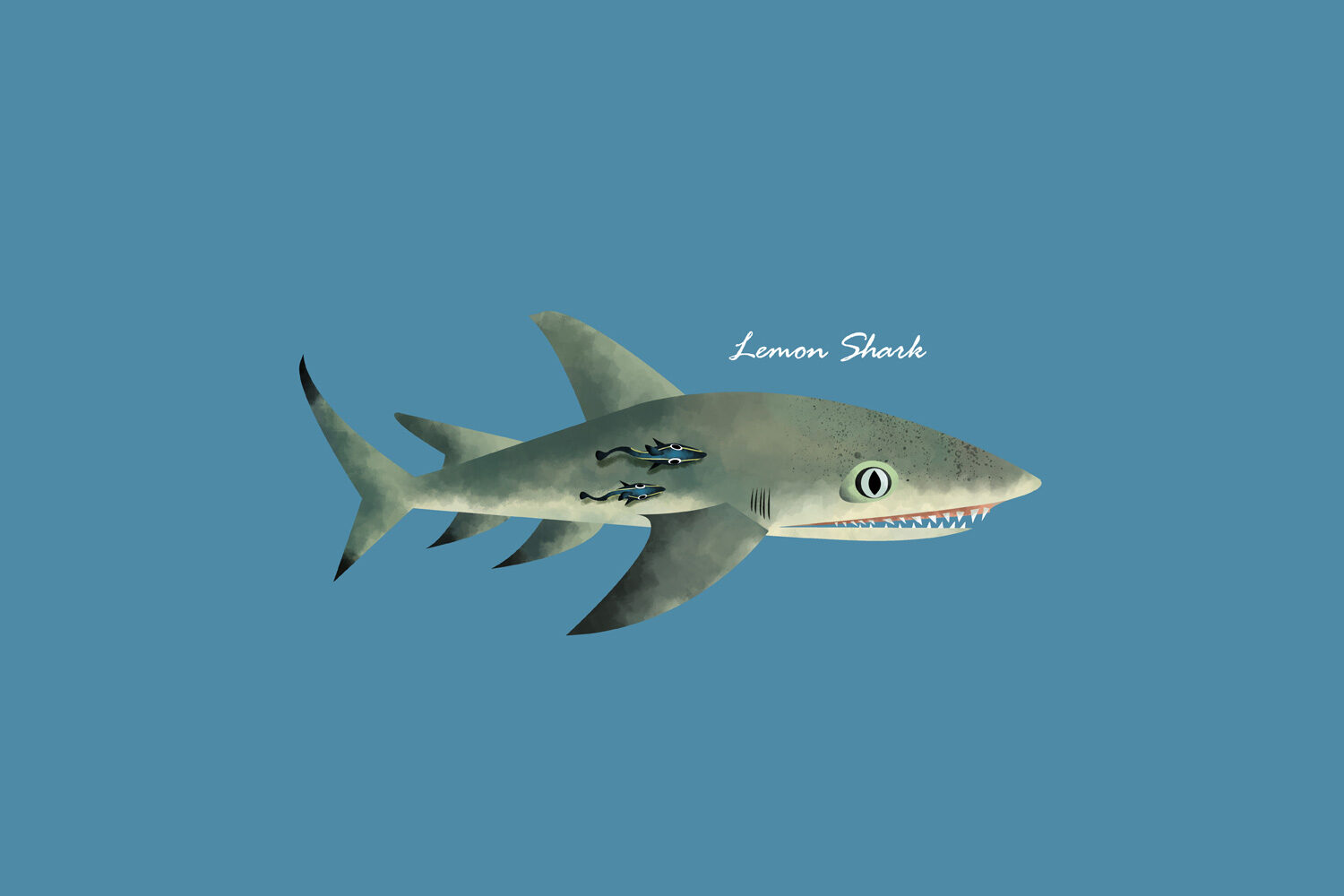 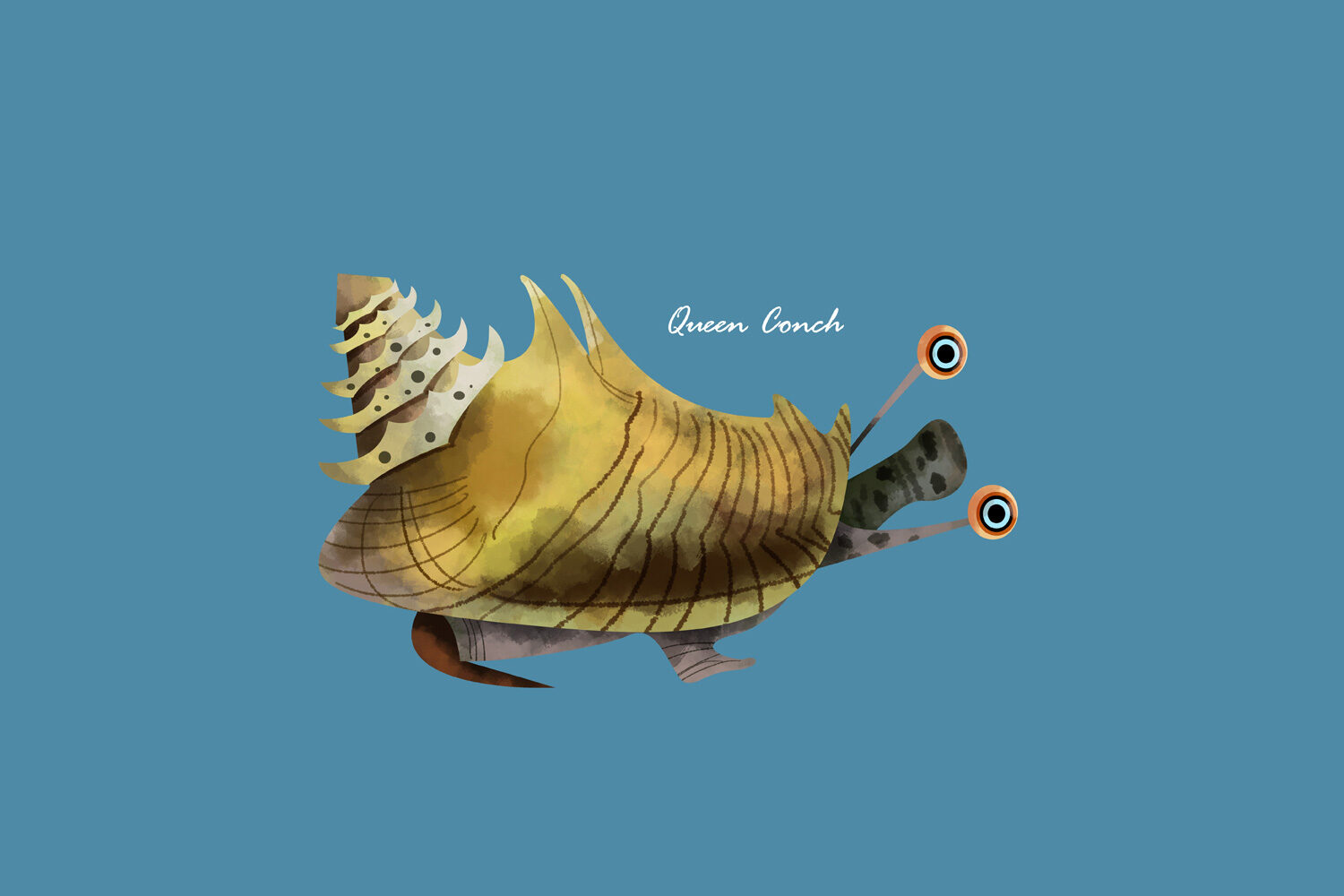 Unfortunately, shell protection doesn’t seem to work very well for sea turtles either, not when they are faced with a tiger shark (Galeocerdo cuvier). The teeth lining a tiger shark’s mouth are different from many other Carcharhiniformes, in that they are sickle-shaped with serrated edges for both cutting into and sawing through prey. That, in combination with its boxy-shaped jaw, allows tiger sharks to encase a turtle shell in its mouth, puncture the tough exterior, and saw through the remaining carapace to the meat of its prey. As a highly mobile species with large home ranges, tiger sharks are found in a range of habitats, from the open waters of the pelagic zone to shallow sandflats, often in search of prey. Just like their habitat visitation, the tiger shark’s diet is filled with variety, and sea turtles are not the only item on the menu. For an apex predator with such a well-equipped jaw, the tiger shark’s biggest limitation is simply being large enough to consume its prey.

These are only a few examples of adaptations we observe in some of the local elasmobranch species. Because most predator-prey interactions go unobserved in the ocean, science has developed ways to determine the feeding habits of many marine animals by analyzing stomach contents, stable isotopes and fatty acid content. In fact, stable isotope analysis on a population of Bimini’s juvenile lemon sharks revealed that while they may seek refuge from predators in the mangroves, they tend to forage in the seagrass beds adjacent to the mangrove forest. By sampling from different tissue types, this sort of analysis can give us either a snapshot or long-term summary of a shark’s diet and predation zones, but it fails to elucidate the methods by which prey is hunted. It is in this arena that we are able to understand why unique characteristics, such as additional senses or specialized mouths, have been evolved to make sharks and other elasmobranchs formidable predators. 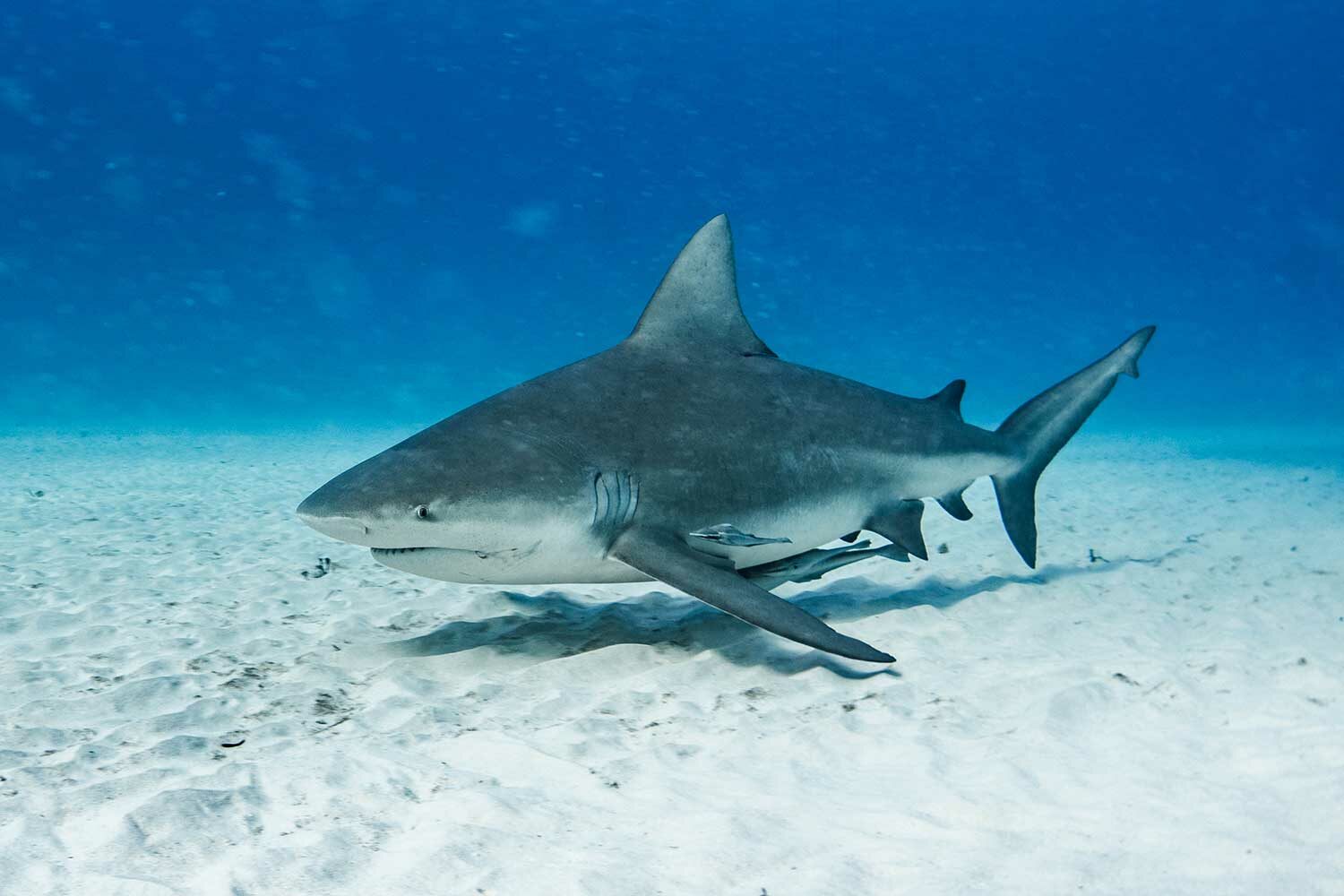 Bull sharks are commonly found in tropical & warm temperate waters, but what makes them unique is their ability to swim in salt & freshwater. Bull sharks can be recognised by their stocky shape, compared to the classic requiem shark shape. Photo by Chelle Blais | © Bimini Biological Field Station Foundation - SharkLab. 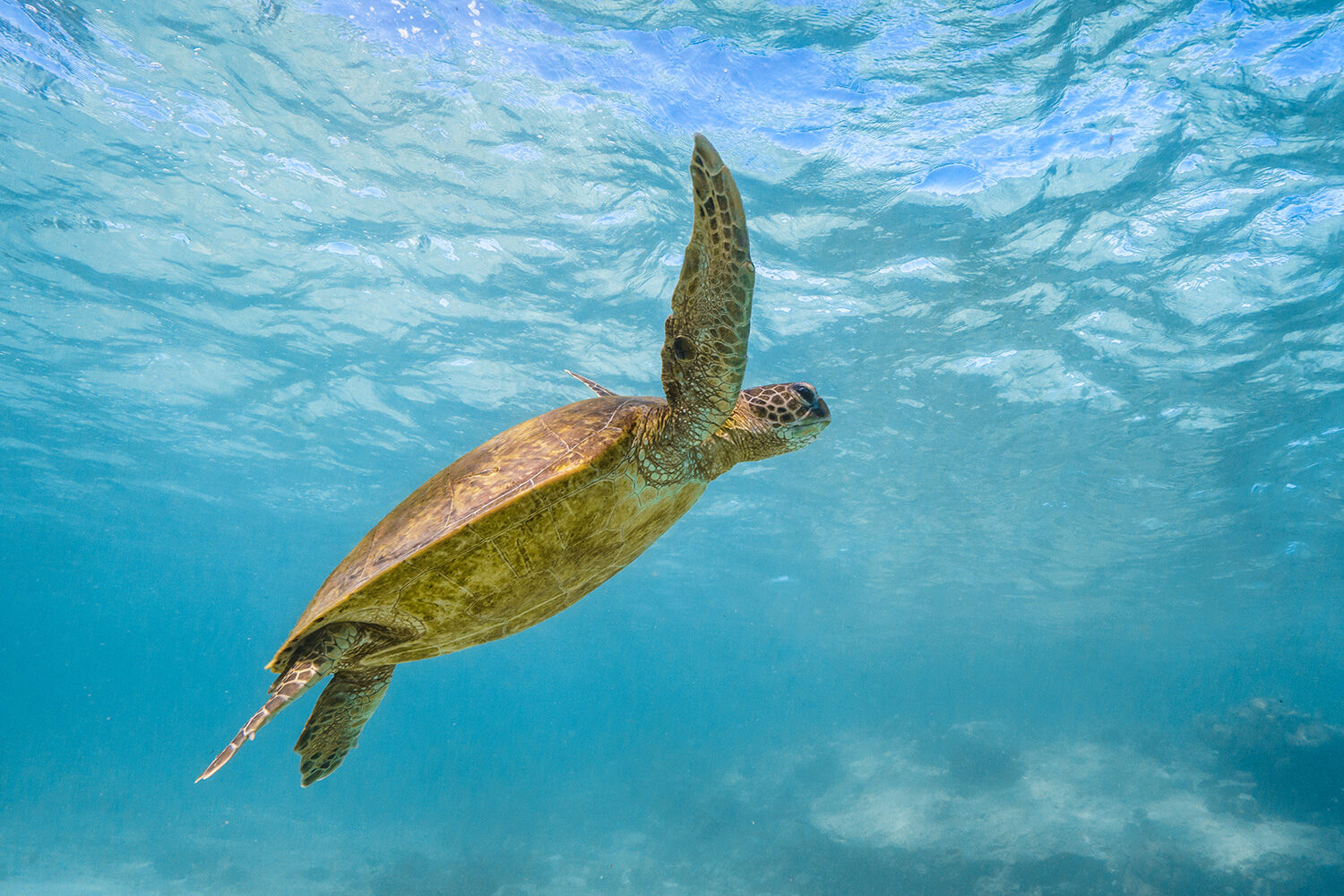 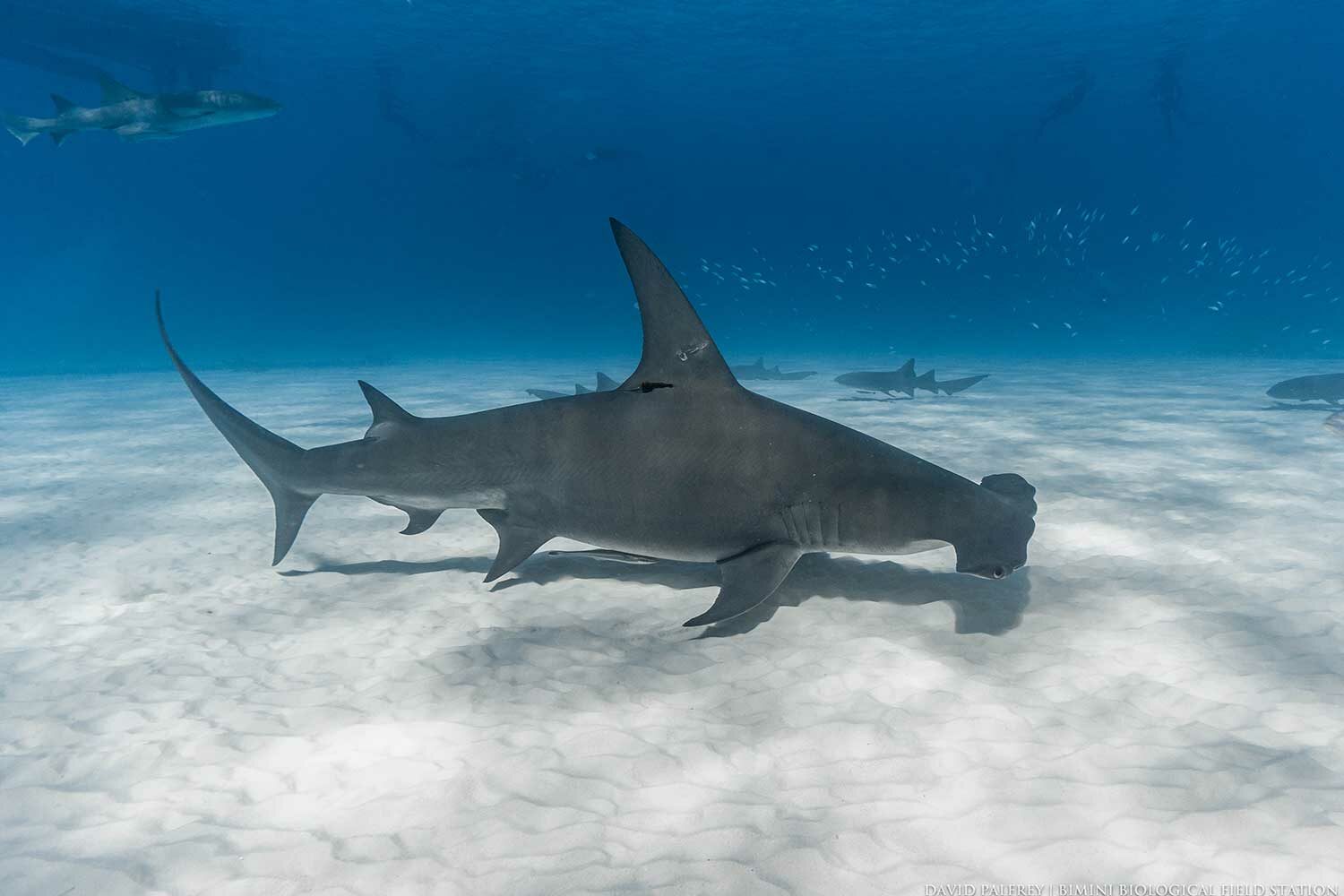 Great hammerheads are the largest of the hammerhead family. They are found in temperate & tropical waters all across the globe. They typically grow to 4 m, but can reach up to 6 m long. Photo by David Palfrey | © Bimini Biological Field Station Foundation - SharkLab. 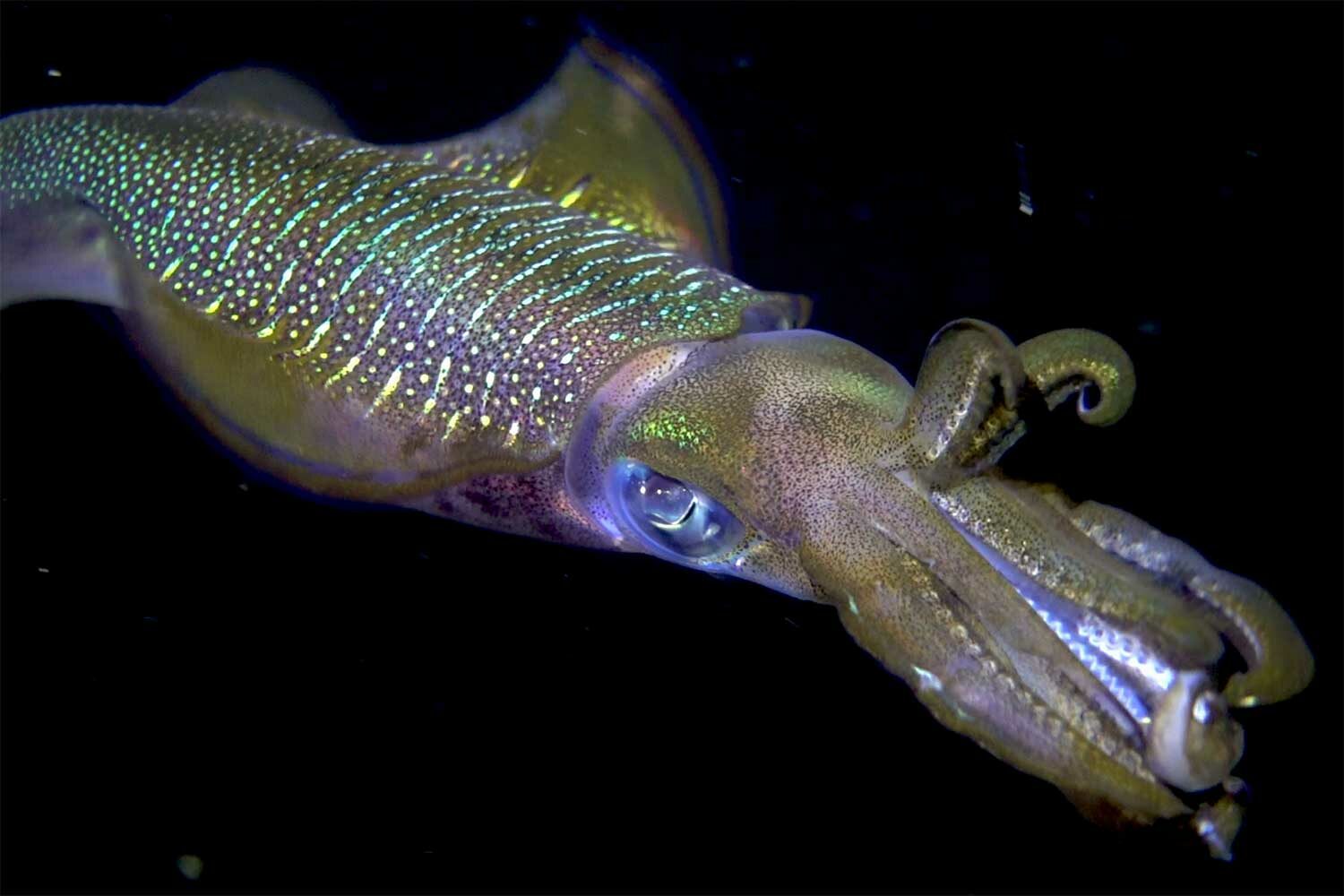 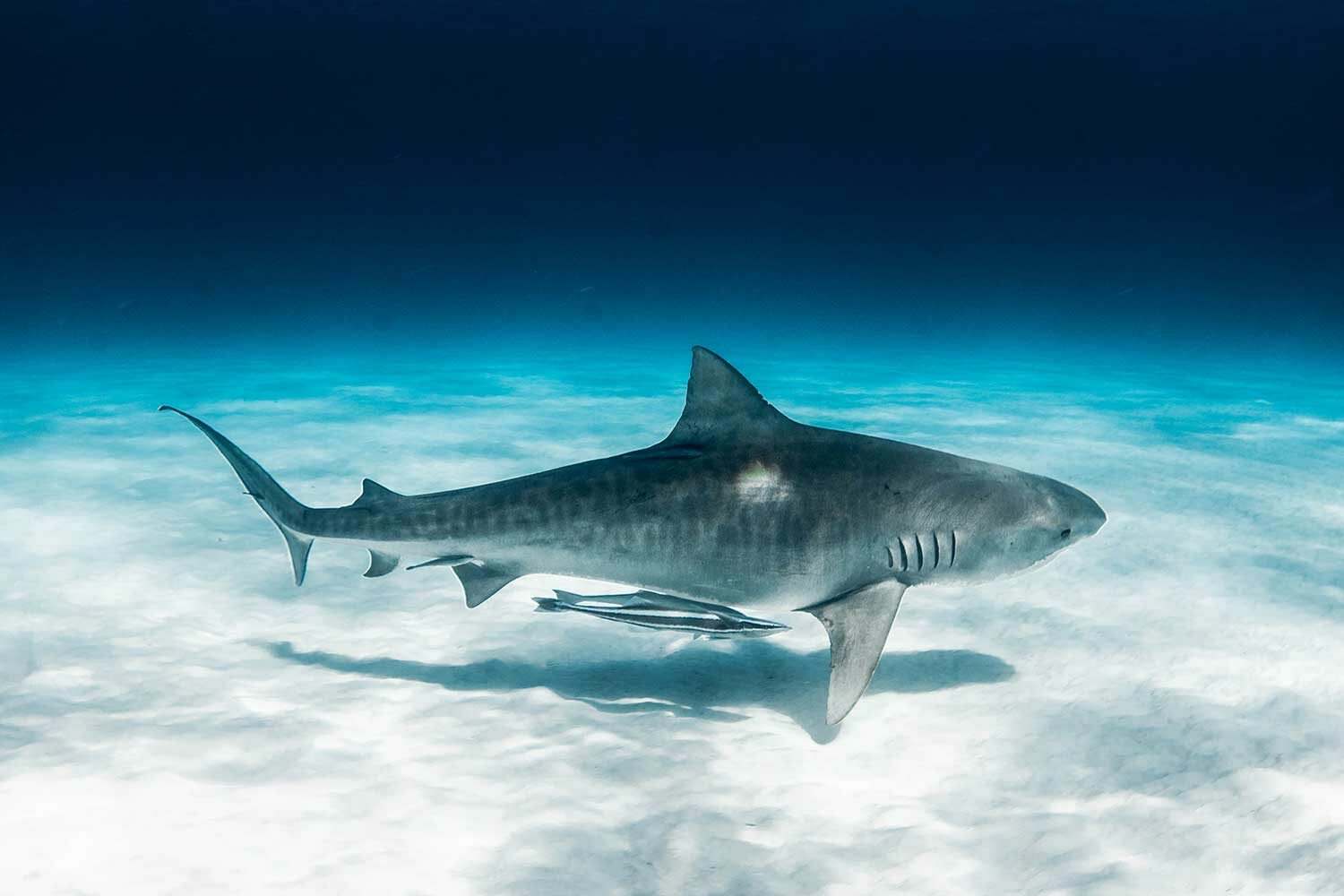 Tiger sharks are found globally in tropical & warm temperate waters & can migrate across ocean basins. When they are young, the markings along the top side of their body resemble stripes, earning them the ‘tiger’ name. Photo by Chelle Blais | © Bimini Biological Field Station Foundation - SharkLab. 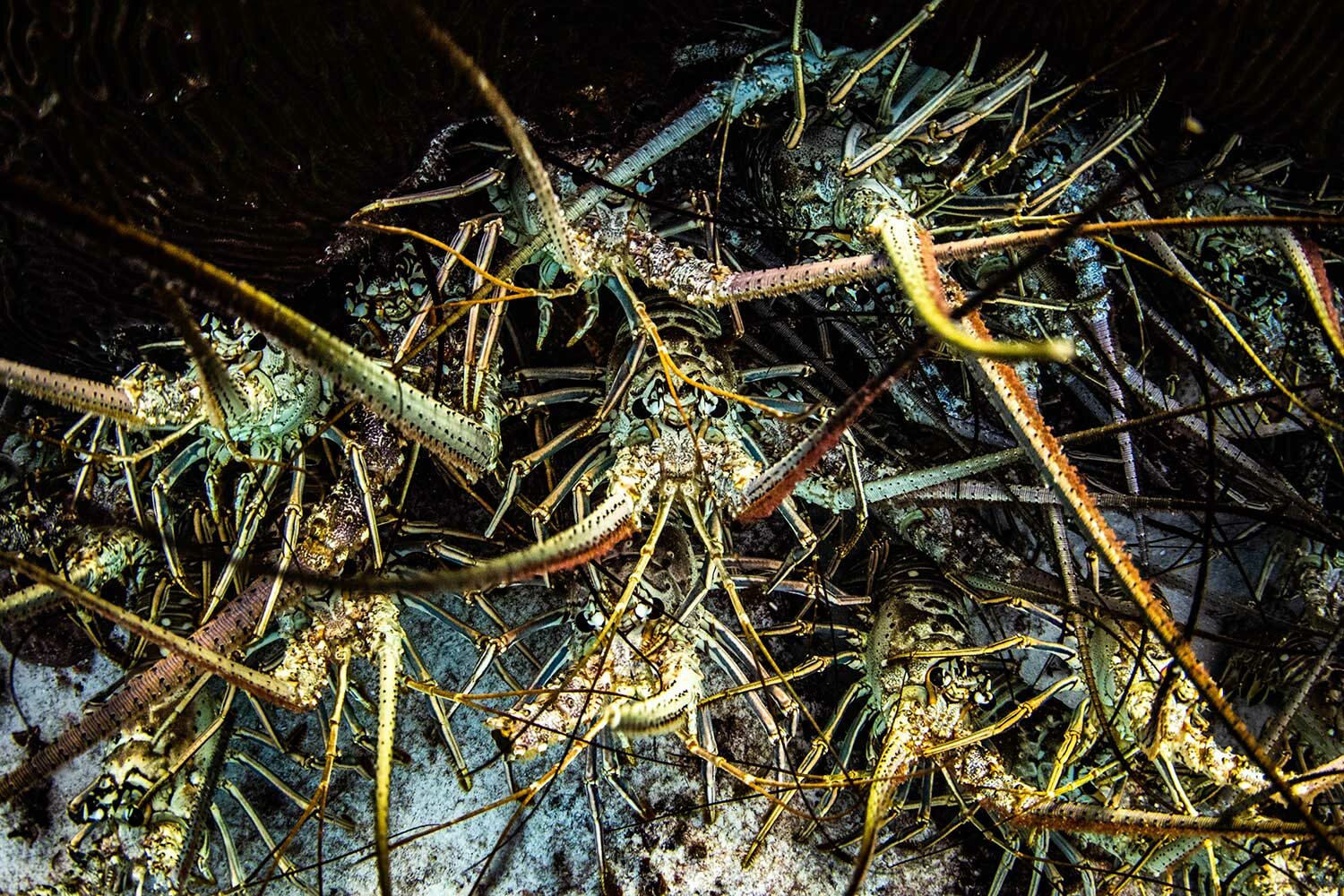 The Caribbean spiny lobster is one of the largest crustaceans in the Caribbean Sea & is one of the most valuable fishery resources for every country throughout its range. They have ten legs & are covered with a spiny exoskeleton that provides it some protection from potential predators. Photo by Chelle Blais | © Bimini Biological Field Station Foundation - SharkLab 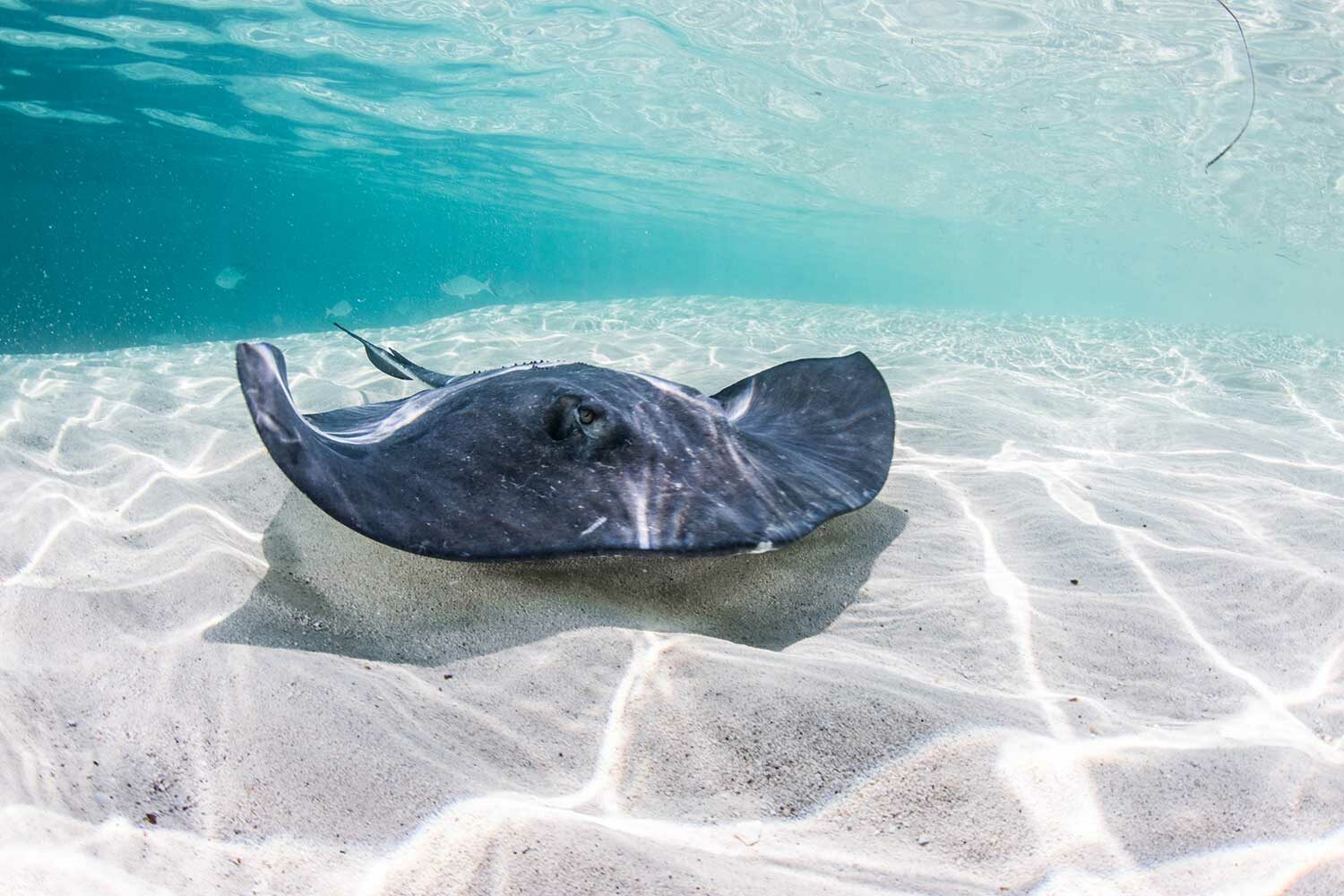 Southern Stingrays are most commonly seen inshore near mangroves, seagrasses, coral reefs, & sand flats. Their body is flattened with their electro-sensory organs located on their underside. This shape allows the species to find prey buried in the sand, while making it easier to hide by burying themselves. Photo by Chelle Blais | © Bimini Biological Field Station Foundation - SharkLab. 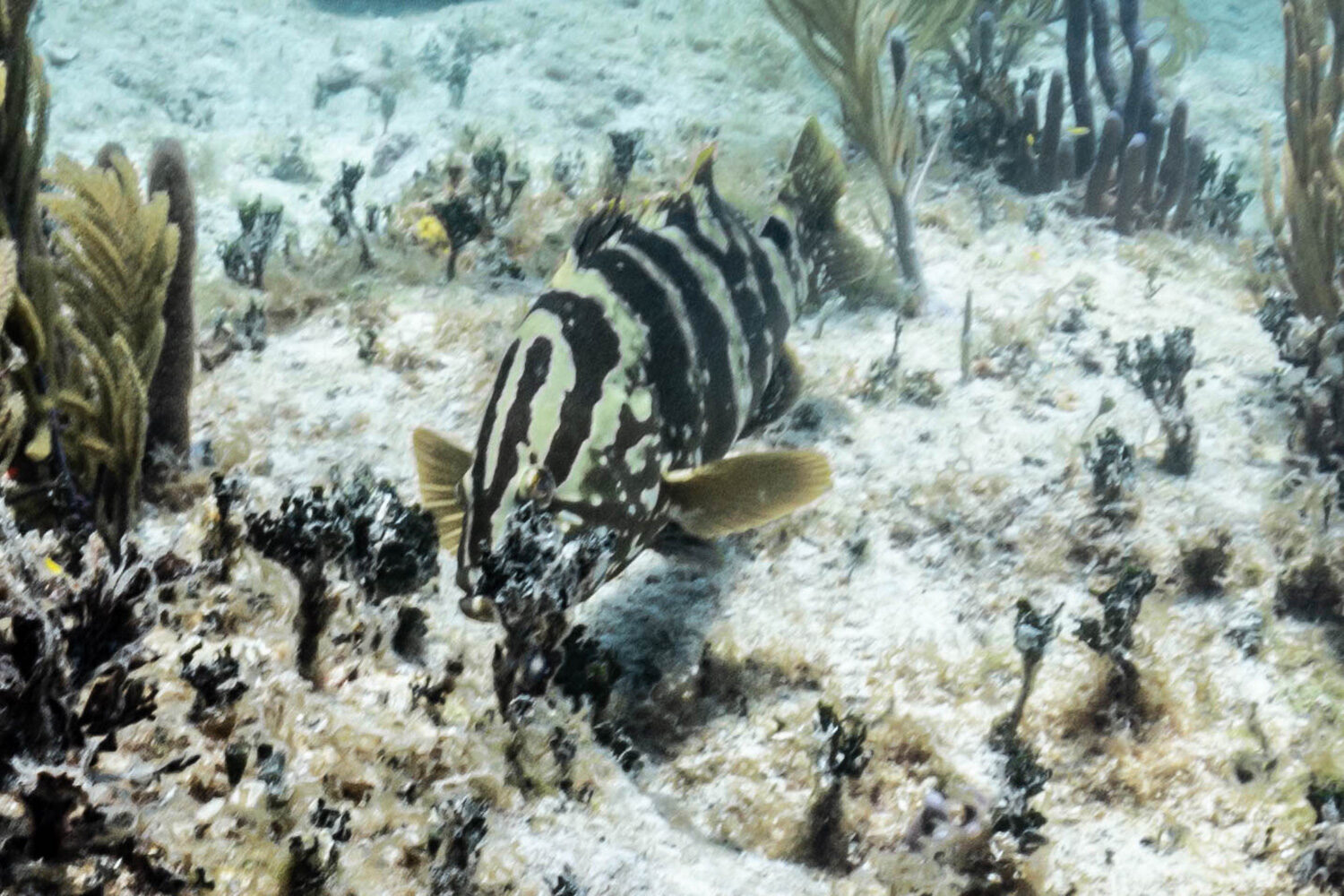 The Nassau grouper is considered a reef fish, but as larvae they are planktonic. As juveniles they are found in nearshore shallow waters in algal & seagrass habitats. They shift deeper as they grow, to predominantly reef habitats. Photo by Chelle Blais | © Bimini Biological Field Station Foundation - SharkLab. 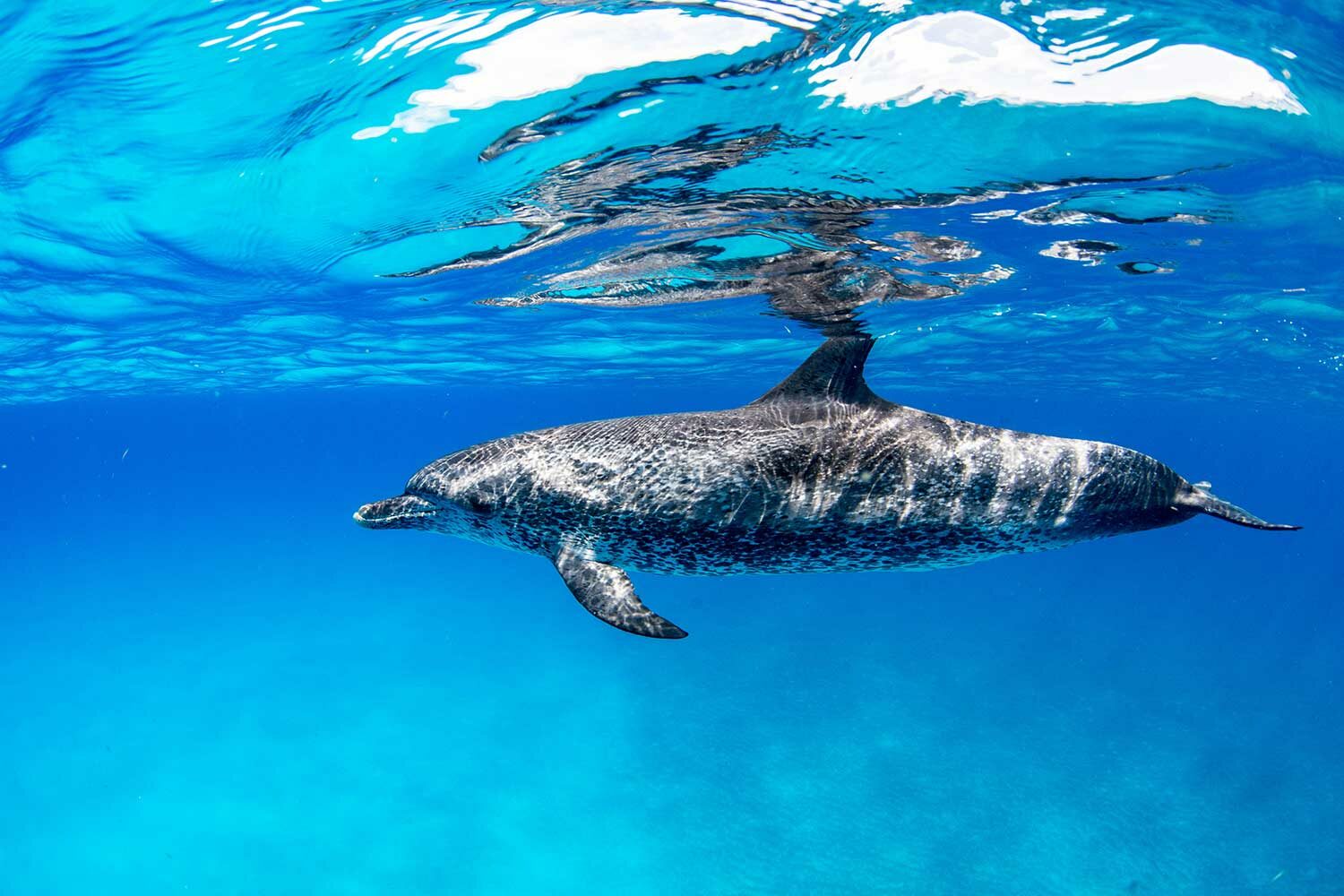 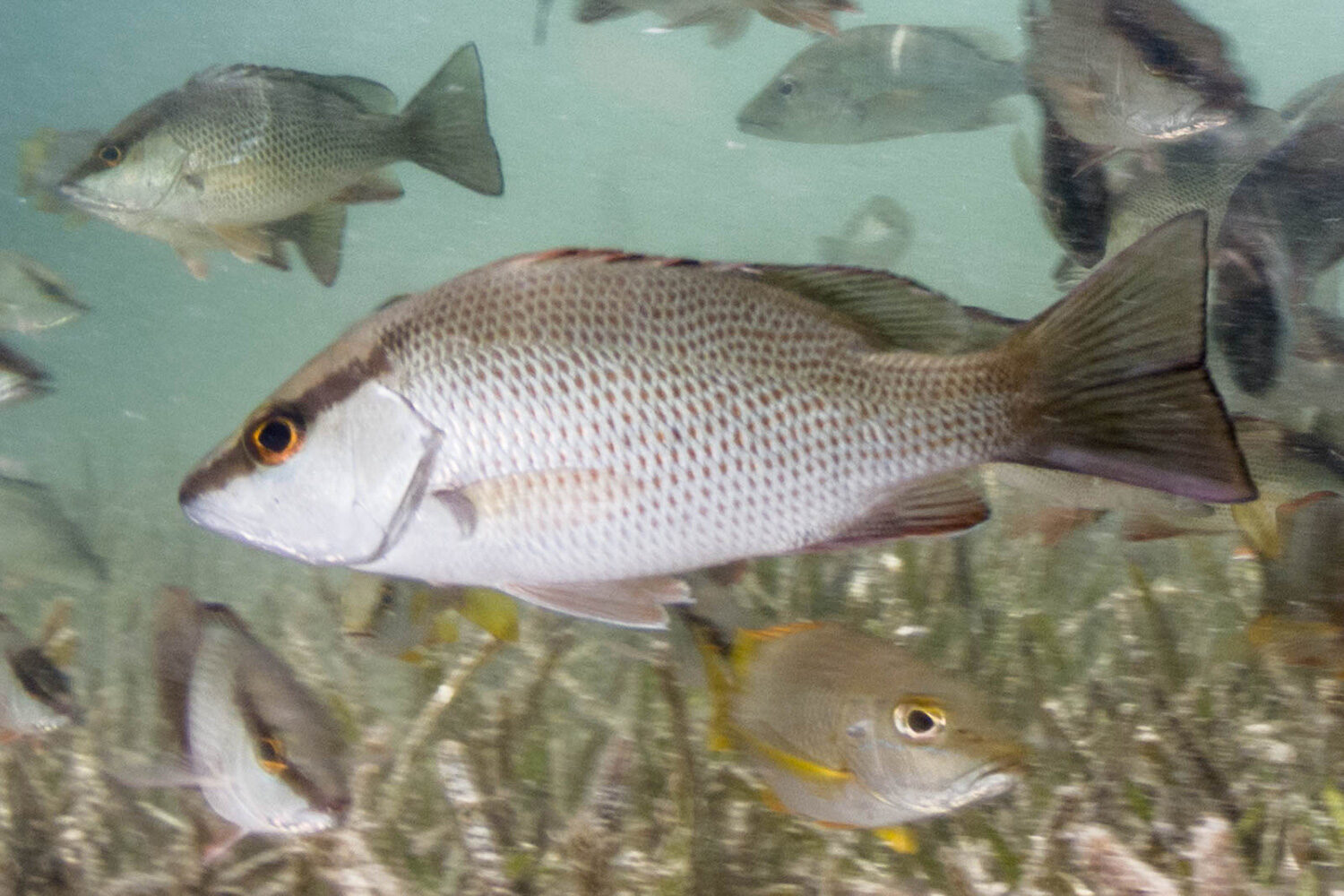 Mangrove snappers are commonly found in mangrove habitats as juveniles & move to coral reef habitats as adults. While they are typically an inshore species, adults move offshore to spawn. They typically reach lengths of over 80 cm, & can live almost 30 years. Photo by Chelle Blais | © Bimini Biological Field Station Foundation - SharkLab. 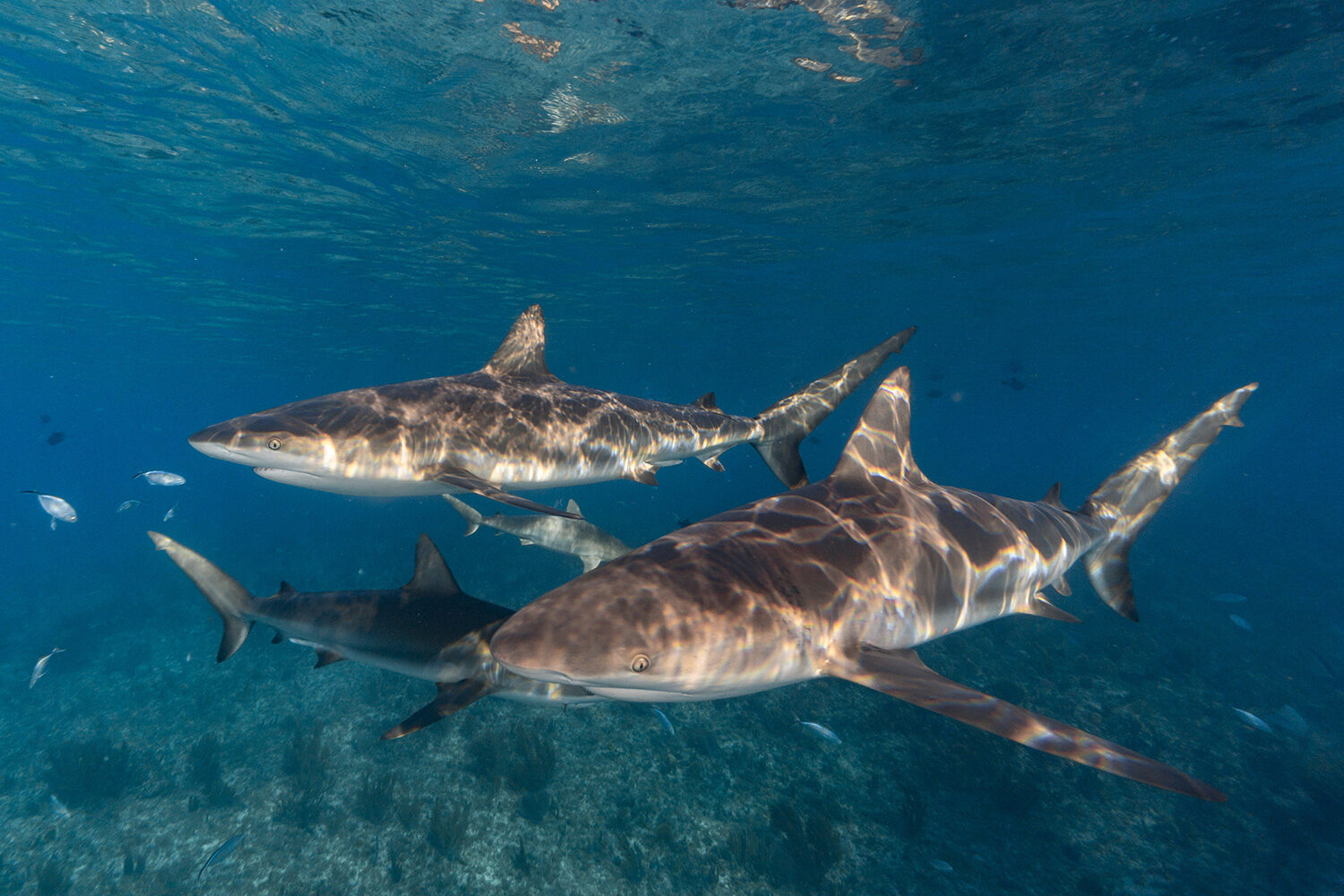 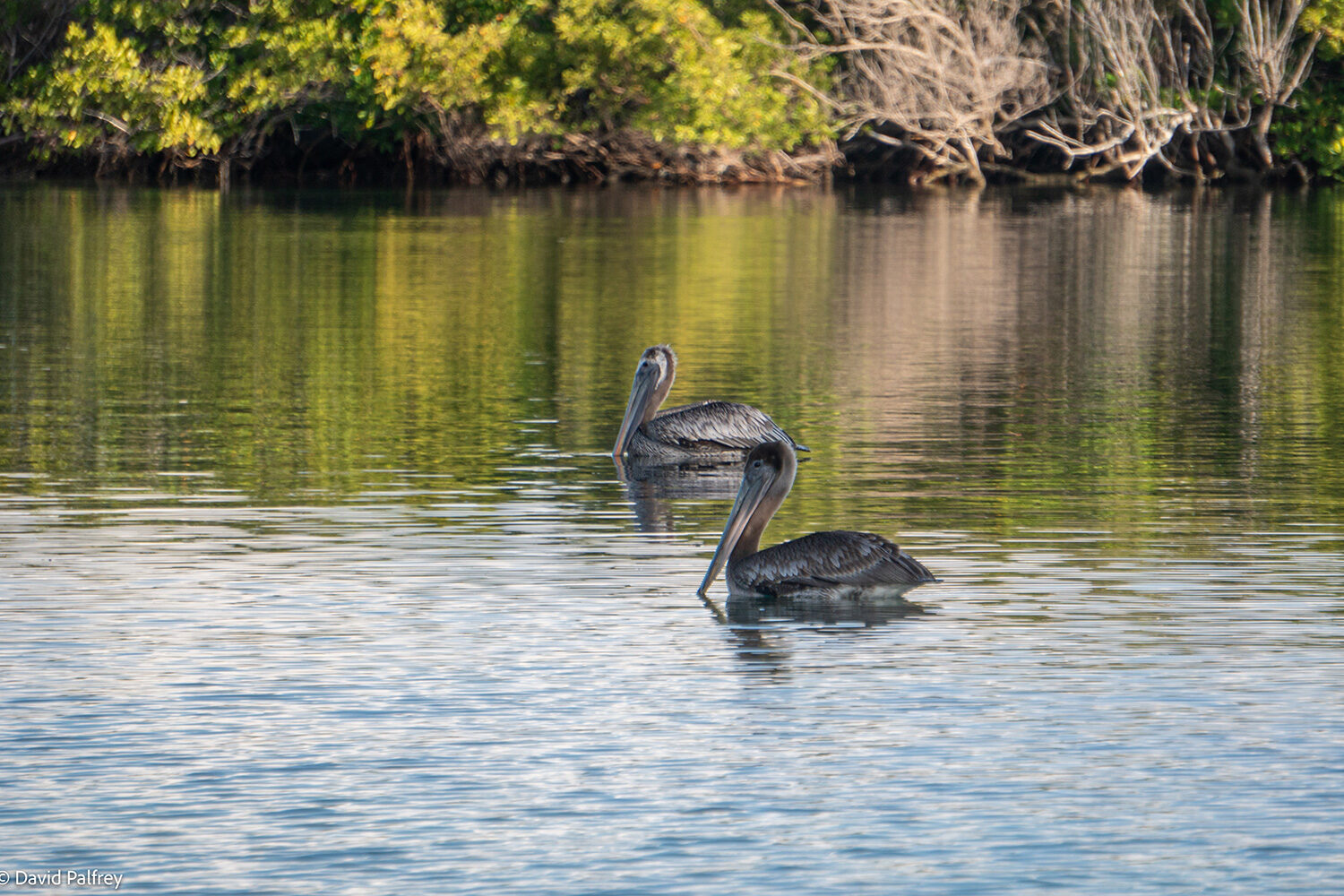 Brown pelicans are found all along the Atlantic & Pacific coasts of the Americas. They avoid the open sea & stay close to shallow shores, estuaries, & bays. They are often found in colonies & congregate in areas with high food availability. Photo by David Palfrey | © Bimini Biological Field Station Foundation - SharkLab. 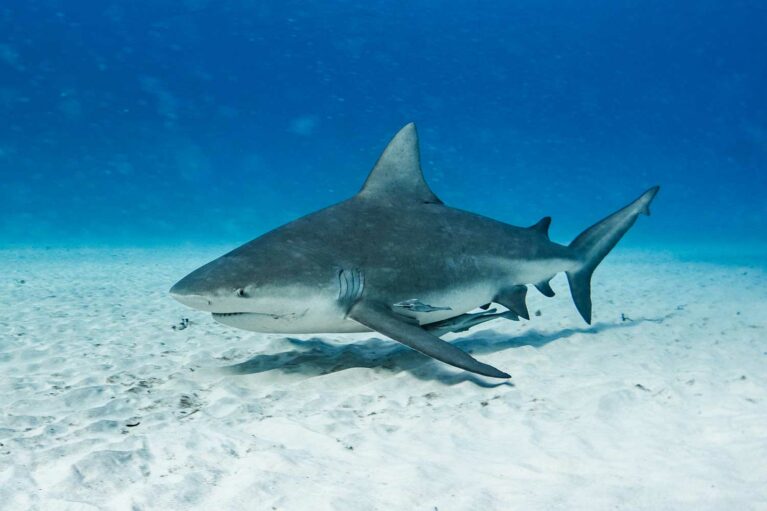 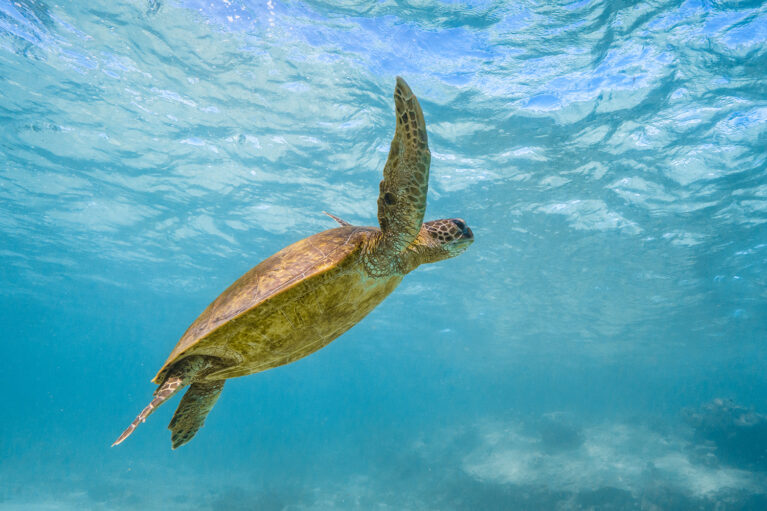 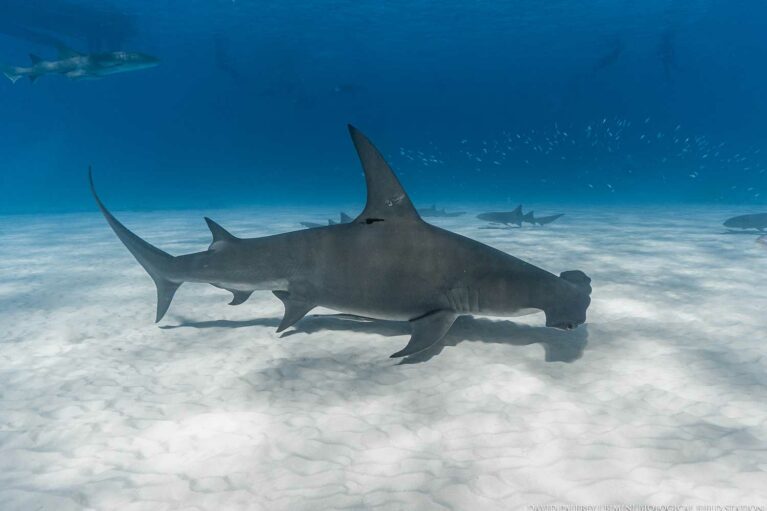 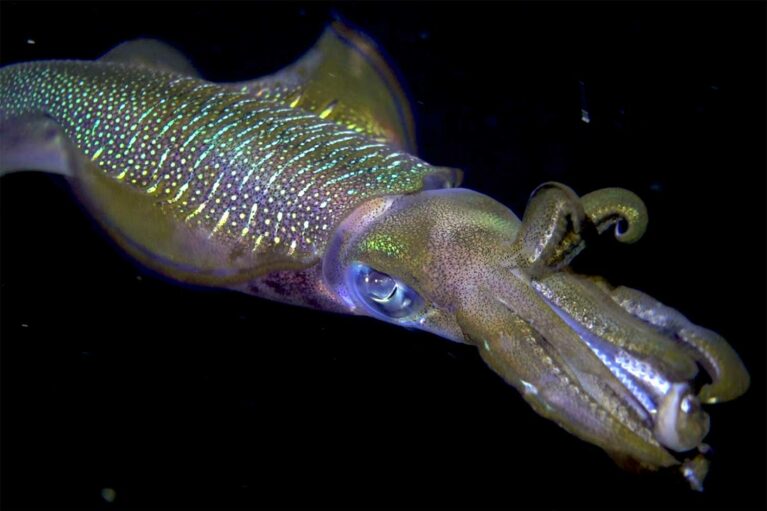 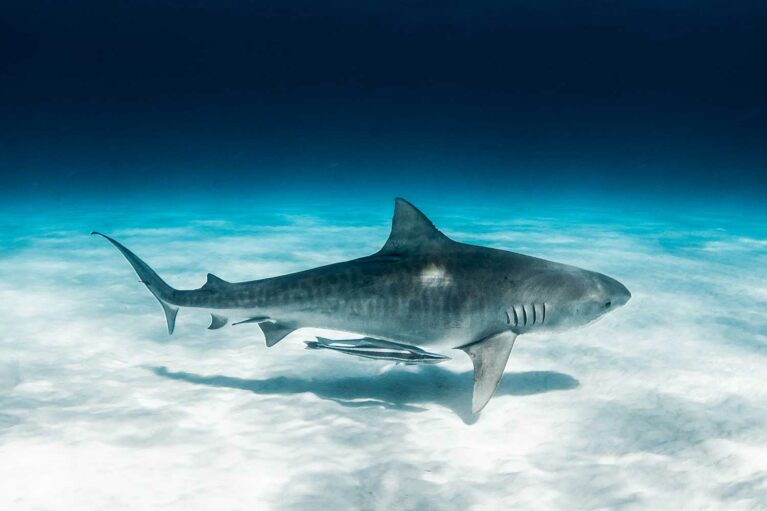 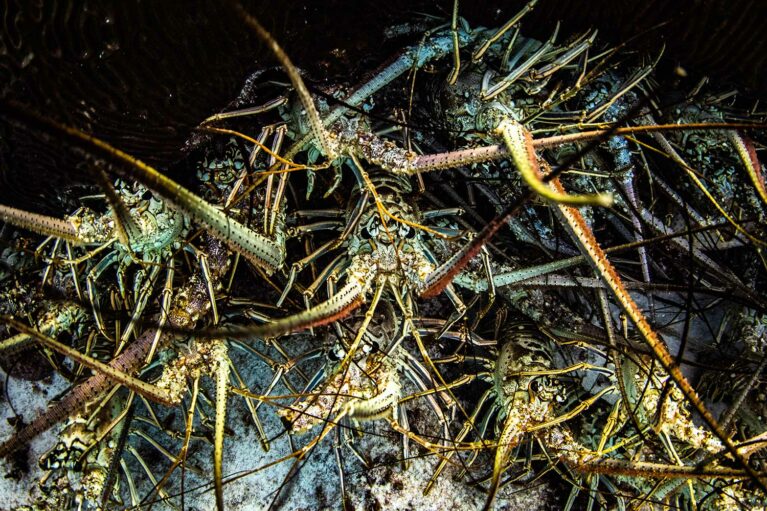 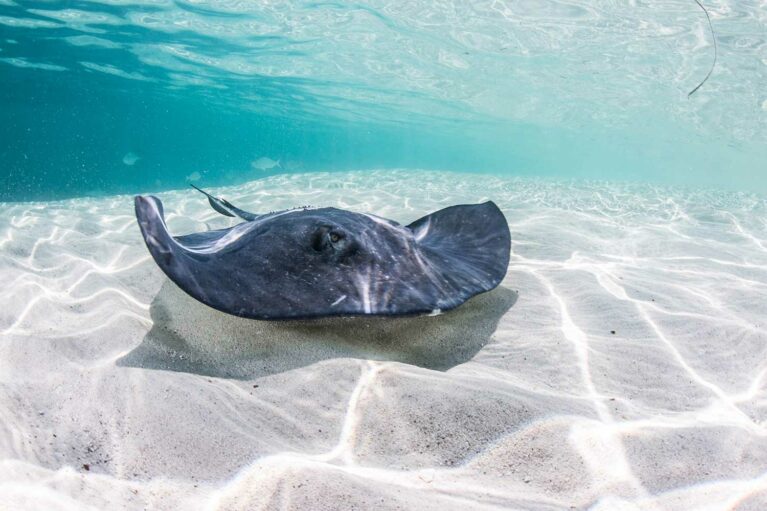 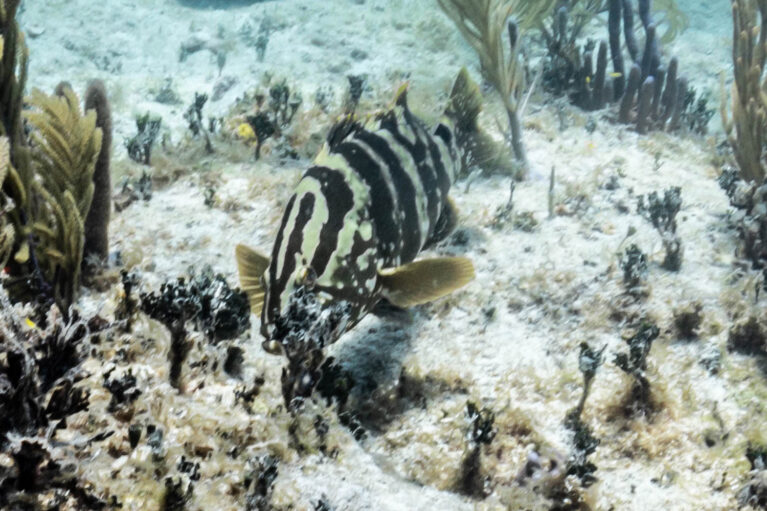 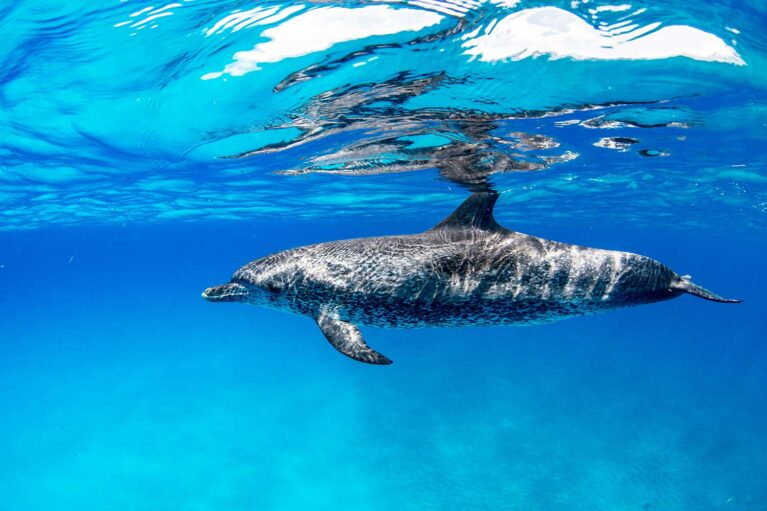 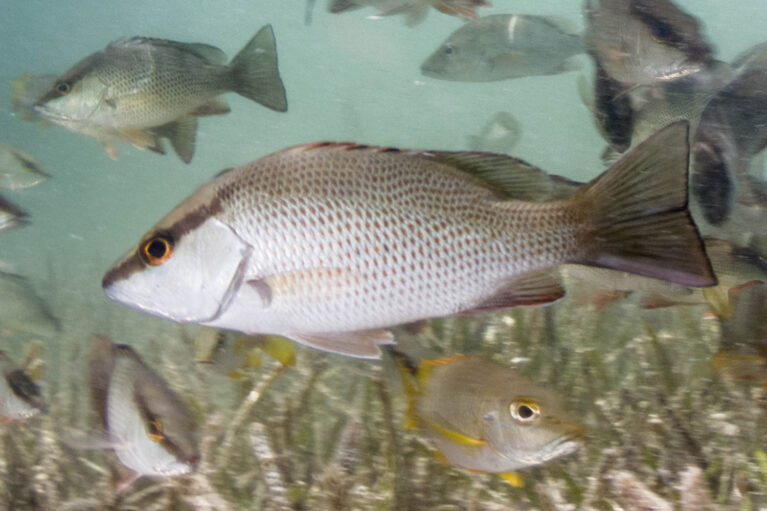 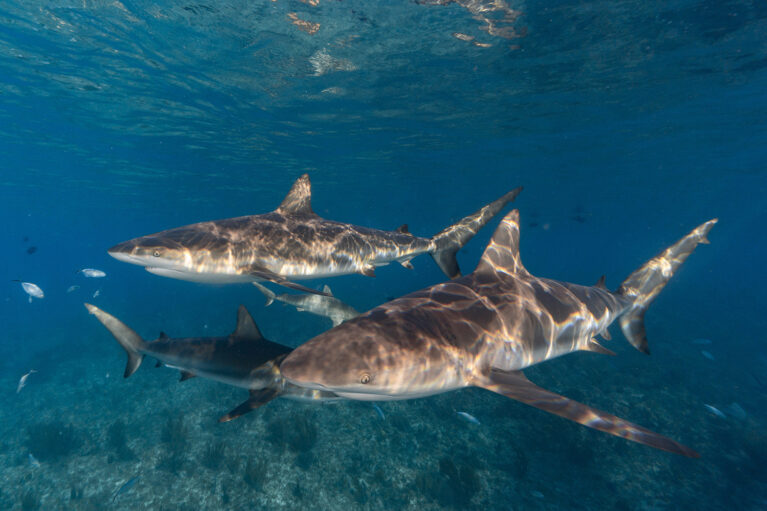 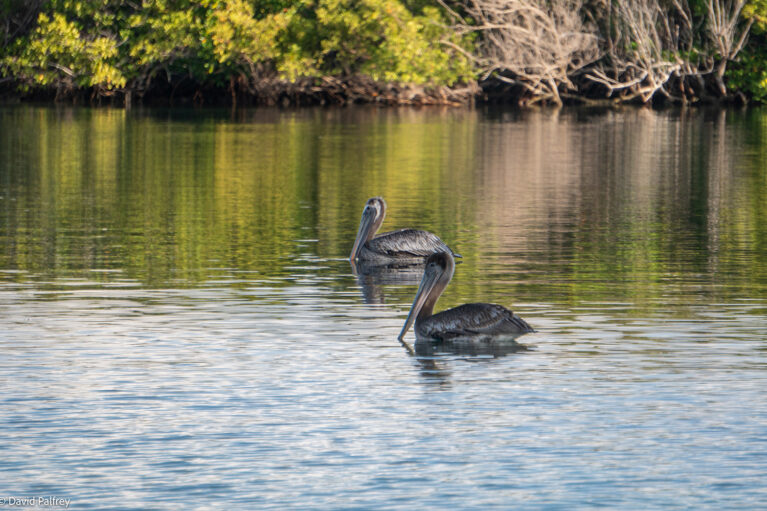