The charismatic sawfish with their elongated sharp-toothed rostrum is one of the most critically endangered family of fish on the planet. Comprised of five distinct species, this family of rays has sparked increased conservation efforts throughout the globe over the past 15 years. Today, SOSF project leader Dean Grubbs from Florida State University is working to better understand sawfish populations, behavior, and reproduction in the Florida Everglades and a remote Bahamian Island named Andros. 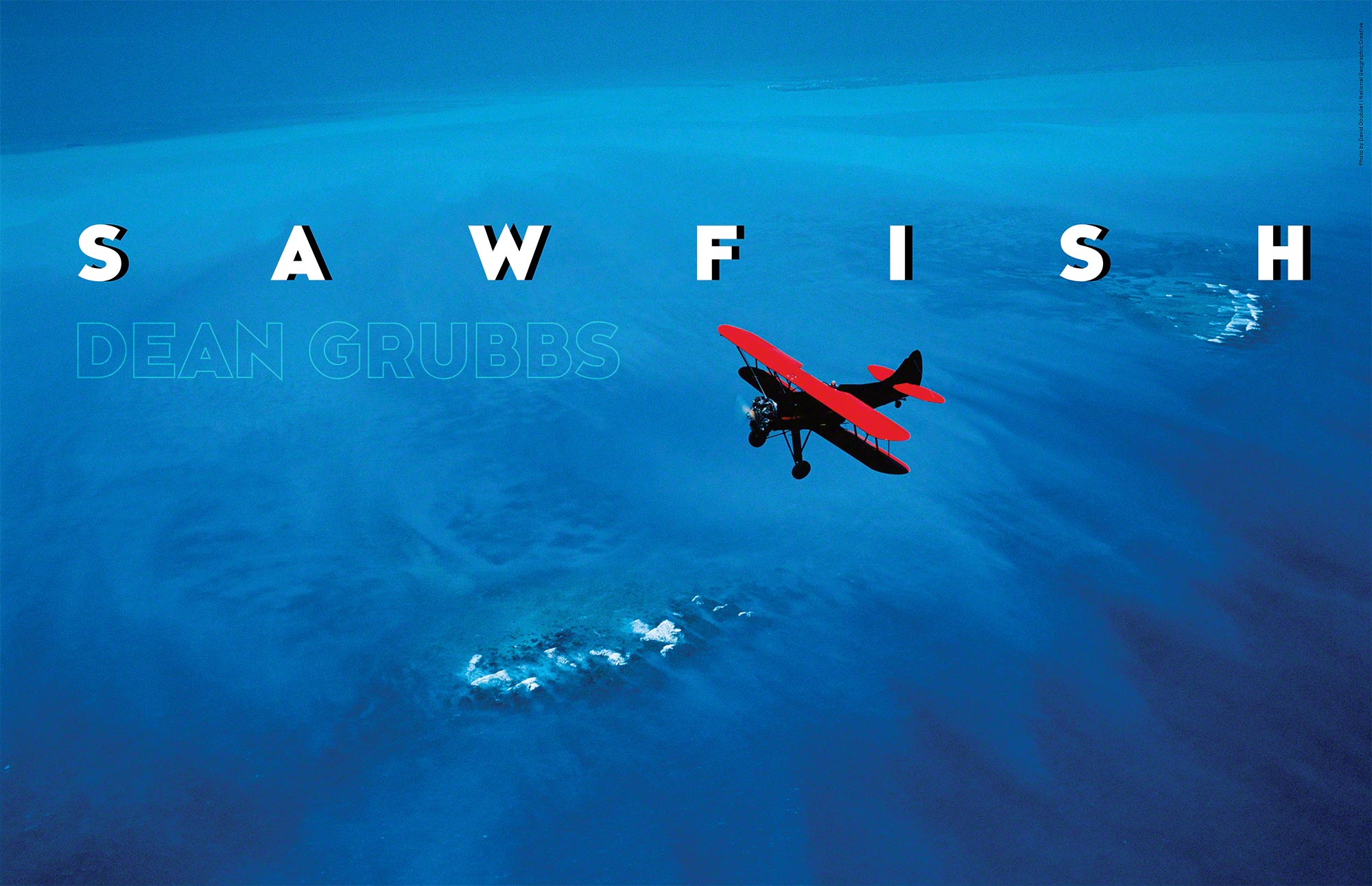 For this project, which began in 2010, Dean and his colleagues have been primarily interested in the smalltooth sawfish — a species which resides solely in the Atlantic Ocean and the only sawfish native to the United States and the islands of the Greater Caribbean Basin. These locations are believed to be the primary remaining stronghold of the smalltooth sawfish in the Atlantic.

To date, more than 50 adult sawfish have been captured and tagged in the Florida Everglades. However, Dean and his team have had more difficulty locating and tagging them in the waters surrounding Andros Island. This may have to do with the shallow, inaccessible, intricate network of cays and interconnected channels the animals reside in. Finally, in December 2016, these researchers captured the largest sawfish on record for the Bahamas, totaling 14 feet in length. First captured in Bimini in 2002, this sawfish was nicknamed ‘Genie’ after famous shark researcher, Eugenie Clark. Aside from miraculously recapturing the animal 14 years later, this milestone was made even more historic when the sawfish gave birth to five pups right in front of the researchers! This was the first time a sawfish birth had ever been recorded in the wild and provides evidence that these animals use the Bahamian waters to deliver their pups. Genie was first caught in Bimini in 2002. Genie was last detected by tracking receivers in Bimini in September 2017. 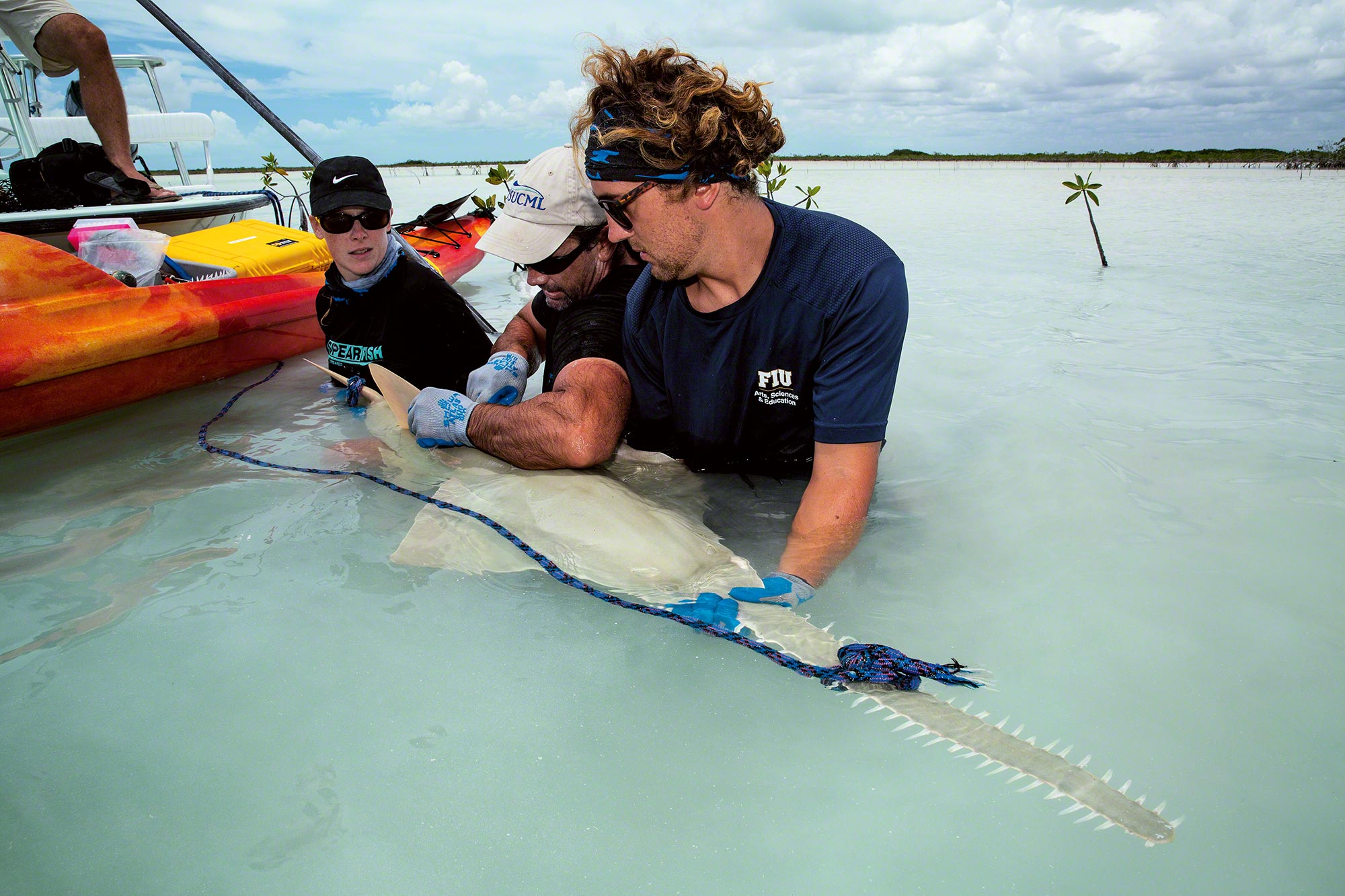 Habitat loss from urban development, agriculture, dredging, bycatch and the diversion of freshwater are the main causes of sawfish population declines throughout the world. Luckily for smalltooth sawfish in the Florida Everglades and Andros, Bahamas, key habitat areas are protected from human development — a factor which may allow them to begin recovering in these locations. Florida, in particular, has shown smalltooth sawfish population recovery since the 1990’s thanks to a ban on entanglement (gill) nets that decreased accidental catches.

SOSF project leader, Nick Dulvy and his colleagues have coined the term ‘lifeboats’ to describe regions where there is hope that sawfish populations may recover and their extinction be prevented. Clearly, Florida and Andros are important areas for the smalltooth sawfish and deserve our protection. With additional research, these locations may be proven as ‘lifeboats’.

To find out more about the mysterious sawfish and the work SOSF project leader Dean Grubbs is doing to help save them, check out the full feature story in Issue 8 of Save Our Seas Foundation Magazine.