Today is a watershed moment in the shark conservation world. All 56 species of requiem sharks (Family Carcharhinidae) and five species of small hammerhead sharks (Family Sphyrnidae) (with the bonnethead shark as the lead proposal) have been listed on CITES Appendix II. The decision comes after anonymous votes were counted at the CITES COP19 in Panama, with an overwhelming majority in favour of adopting the proposals with a 12-month delay. The results can still be reopened next week during the plenary session. However, if formally adopted, this measure affords a degree of regulation, and unprecedented precautionary protection for these sharks. The listing is a leap forward in halting unsustainable trade in their meat, fins and other products. Ensuring improved surveillance of the international trade in shark products is undoubtedly a good thing; the melancholy note to any successful regulatory or protection measure lies in the continued need for management in a major biodiversity crisis. That said, the global political recognition of both the threatened status of sharks and rays, and their critical value to the healthy functioning of our planet (and our futures), is a win that merits celebration today. 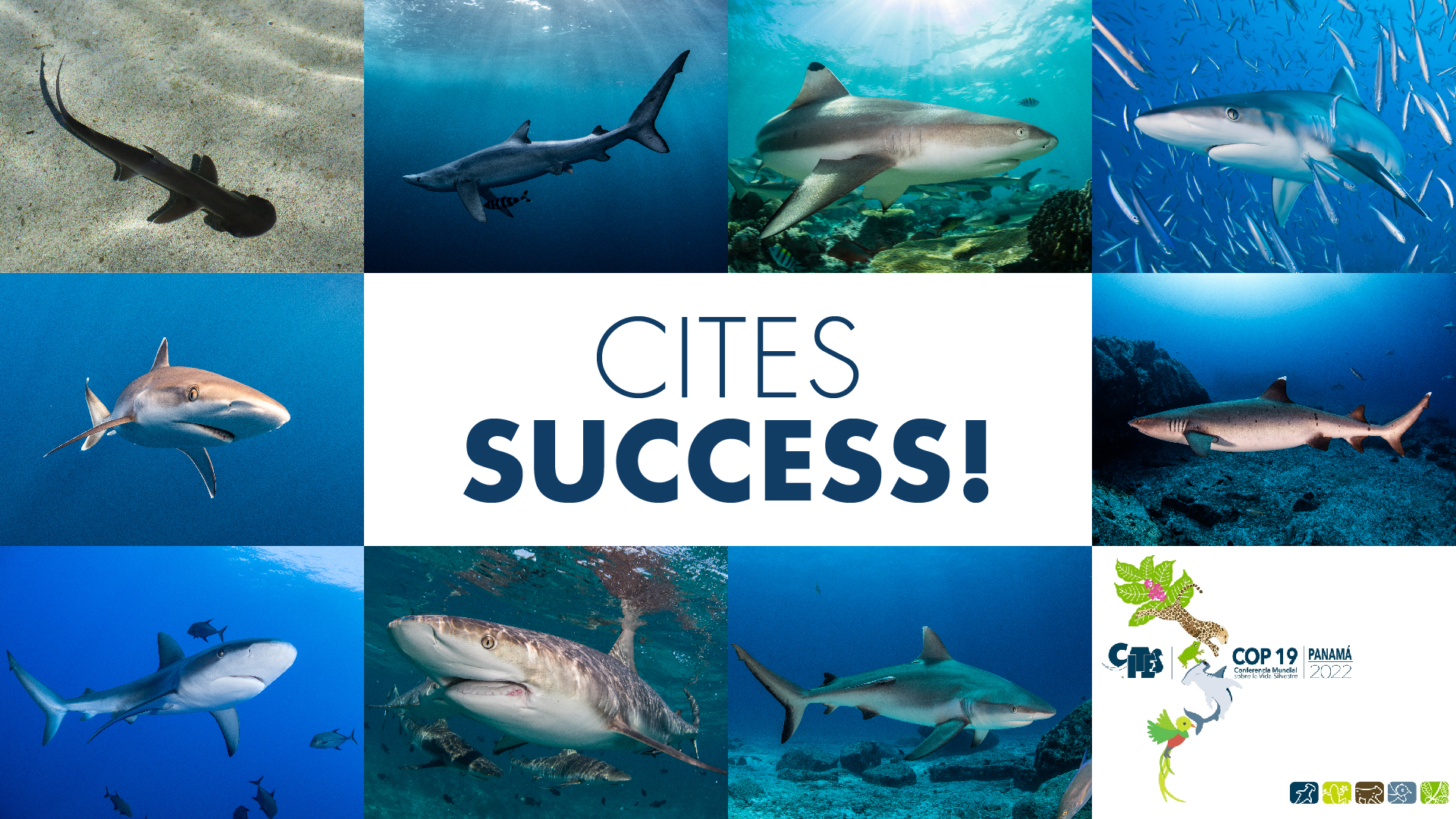 Which species are now protected?

The requiem sharks are one of the largest families of sharks in the world. Nineteen species were listed as lead proposals and are some of the most threatened species that remain in trade today:

Speaking from the Convention, where Sarah Fowler is in the EU delegation (one of the proponents of the shark listing proposals), Sarah said:

“I had, at times, been worried that we might not reach the necessary two-thirds majority vote for the requiem sharks – particularly the lookalike species. Reaching 75% of the votes in secret ballot (a margin of ten votes) was a testament to the dedication of the shark alliance countries that have worked together for sustainable fisheries and trade, and to protect the livelihoods of their coastal communities.”

The Endangered bonnethead shark Sphyrna tiburo, (Sphyrna tiburo (Bonnethead Shark)) was the lead proposal for the small-bodied hammerhead sharks. With up to 80% of its population having declined in some areas and disappeared entirely in others, the bonnethead shark exceeded the requirements for listing on CITES Appendix II.

What does a listing on CITES Appendix II mean?

Listing shark species on CITES Appendix II means that any future and further trade in these species should be stringently monitored. From now on, any countries trading in shark products from the listed species need to be able to demonstrate that the trade is legal and sustainable. Before issuing export permits, countries must prepare documents called legal acquisition findings (LAF) and non-detriment findings (NDFs), which means they must be able to demonstrate that the species was caught legally and international trade will not endanger its survival.
You might want to revisit how this works by listening to Save Our Seas Foundation (SOSF) scientific adviser and vice-chair of the IUCN Shark Specialist Group for international treaties Sarah Fowler in an episode of The Whole Tooth podcast.

Why is this a landmark CITES listing?

Until now, species that look alike could be mixed on the international market. That is, a CITES-listed, highly threatened species could still be traded under the name of a non-listed species because the ability to distinguish their fins, meat, or other products at a border post is low, even if the whole animal is easy to identify. This keeps endangered species in circulation, despite protective listings. The inverse problem could also arise: because threatened species have been listed, the demand for non-listed species and their appearance on the international market could also rise. This has, to date, been a major flaw in the efficacy of CITES for sharks. However, today’s result is unprecedented in its adoption of the precautionary approach: all requiem sharks and small-bodied hammerhead sharks, regardless of whether they were lead species or not, have been listed (the remainder all as look-alikes). This should close the loophole that allowed listed species to creep back into trade and will stave off the decline of non-listed species that are overfished to compensate for listed species.

There is also a human factor to this listing, and it lies in relieving the burden of work for beleaguered border officials. Requiem sharks are among the most traded species in the world. Many of the species in trade are also highly threatened. Viewed in combination with the bonnethead shark and guitarfishes, the numbers of endangered species in circulation have been so high that it is likely that every shipment arriving at border posts contained threatened species (only some of which were CITES-listed). After today’s vote, it is plausible that every container of shark products arriving at a border will contain CITES Appendix II species. This means that every container will need to have a permit, improving monitoring of the entire fin trade. It is a critical step to reducing the current burden on border officials, who currently have to search every single shipment for listed species.

And finally, there is a philosophical angle to today’s outcome. Listing requiem sharks and small-bodied hammerhead sharks on CITES Appendix II this year is a precautionary measure. Many, but not all, of the species in these families are highly threatened. However, we are often left having to play ‘catch-up’ in conservation, responding to catastrophic declines in populations only once we have been able to demonstrate how dire the situation is. The listing today is historic because it protects sharks before their numbers drop so low that many would have to be entirely banned from capture. This makes sense for holistic sustainability; when we respond in time to serious conservation information, we can prevent far greater economic and livelihood repercussions for people who depend on sharks, fisheries and the sea.

Once a species is listed on CITES Appendix II, governments must be able to show that any trade in the products of that species is legal and sustainable and that it adheres to CITES regulations. Countries that wish to continue to trade these species will need to start preparing their NDFs. This requires time and often funding, an obligation that is often cited as burdensome for developing nations where resources are stretched and threatened biodiversity is high. Much work has been done for previous CITES listings to develop NDF tutorials and direct research and funding towards CITES-listed species.

“The only amendment to the requiem shark listing proposal, tabled by the government of Panama, is to delay implementation by 12 months, instead of the usual 3 months from the end of the Conference. This will be a very busy year! Parties are already requesting training for their wildlife, fisheries and customs staff, so that they can develop NDFs and issue export permits in good time.” Says Sarah

What is the long-term vision of a CITES listing?

Requiem sharks and the bonnethead shark are integral to the healthy functioning of some of our planet’s most important marine ecosystems. The intricacies of their roles in these habitats we are only just beginning to understand – and yet we do know to some degree that we rely on these sharks to ensure that coral reefs can provide jobs, food, medicines, storm protection and climate change mitigation for us. We also rely on these sharks to keep seagrass meadows functioning. The latter are phenomenal ocean ecosystems that help store excess carbon dioxide from the atmosphere, an invaluable process that will help us adapt to and survive our changing climate. Listing sharks and rays on CITES is, in the short-term, about ensuring their survival. But in the long-term, every conservation decision we make has repercussions for us and the future for our children. The supposedly cooperative and forward-thinking spirit of a voluntary international treaty can oftentimes lose its lustre. It’s therefore an inspiring injection of hope when the original aims of a tool like CITES rule the day, and our collective futures – ours, sharks, and our oceans – are prioritised.