In conversation with Pippa Ehrlich

AS A FIRST-TIME NATURAL HISTORY FILMMAKER, PIPPA EHRLICH TOOK ON THE CHALLENGE OF CO-DIRECTING A FILM ABOUT AN OCTOPUS.
THE RESULT, MY OCTOPUS TEACHER, HAS WON ACCLAIM AROUND THE WORLD. PIPPA TALKS TO A FORMER COLLEAGUE AT THE SAVE OUR SEAS FOUNDATION.

How did you get involved in My Octopus Teacher?

Five years ago a friend of mine, Ross, showed me a San-Bushman painting that depicted connections between people and animals and it just blew my mind. He’d come across the painting through his work with a filmmaker called Craig Foster. After asking if I may join them on their regular dives, one day I found myself on a False Bay beach with Craig and Ross. I have been diving in the Great African Sea Forest since my early 20s, but on that day I felt I was entering a brand-new place – as if I’d put on a pair of magical goggles. I then started diving regularly with Craig, allowing my body to adapt to the cold and learning to track animals underwater. After about six months, Craig told me he wanted to make a new film and asked if I would like to help. He’d mentioned his experience with the octopus but hadn’t said too much about it. When I read the treatment for the film I knew there was a special story here and that I really wanted to be part of the project. 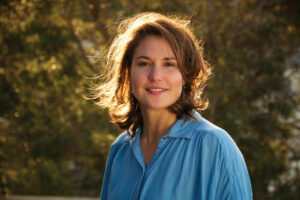 What was your role in the film?

Initially, it was a loose collaboration. I thought I’d just be carrying Craig’s tripod, but soon I sat down with Edit Suite and after going through all the footage I became the editor.

The octopus story had already been shot, but we also needed general visuals of the kelp forest and other animals. And we needed to put Craig in the environment. So I started shooting. Later, when we decided to tell the story through Craig’s interview, he became more of a subject than a director. And I took over the directing with James Reed.

Did your experience at the Save Our Seas Foundation influence your approach to the film?

Absolutely. If I hadn’t had those four years at the Save Our Seas Foundation, I could never have made this film. Firstly, talking to the foundation’s project leaders around the world was like taking a crash course in marine biology. Learning so much about the ocean and its creatures prepared me to tell an in-depth story about the natural world. The other thing I realised at the Save Our Seas Foundation – and it saddened me a little – was that in my conversations with scientists they would share their experiences in wild, incredible places with all kinds of creatures. Their eyes would glisten and their voices would crack, and I could feel that they genuinely loved what they were doing and the creatures they worked with. But when it came to writing, they often struggled to express such feelings because they felt safer in the realm of facts.

Science is absolutely crucial. It’s a foundation for our understanding of nature and it’s critical for finding solutions to what’s going on in the world. But we also desperately need to grab the attention of people outside the scientific community and, as Jane Goodall says, if you want to change people’s behaviour you have to speak to their hearts. These biologists had such incredible stories, but they weren’t comfortable speaking from their hearts. That’s what made this film so exciting for me: it was an opportunity to tell an emotional story about a human’s relationship with a marine creature. 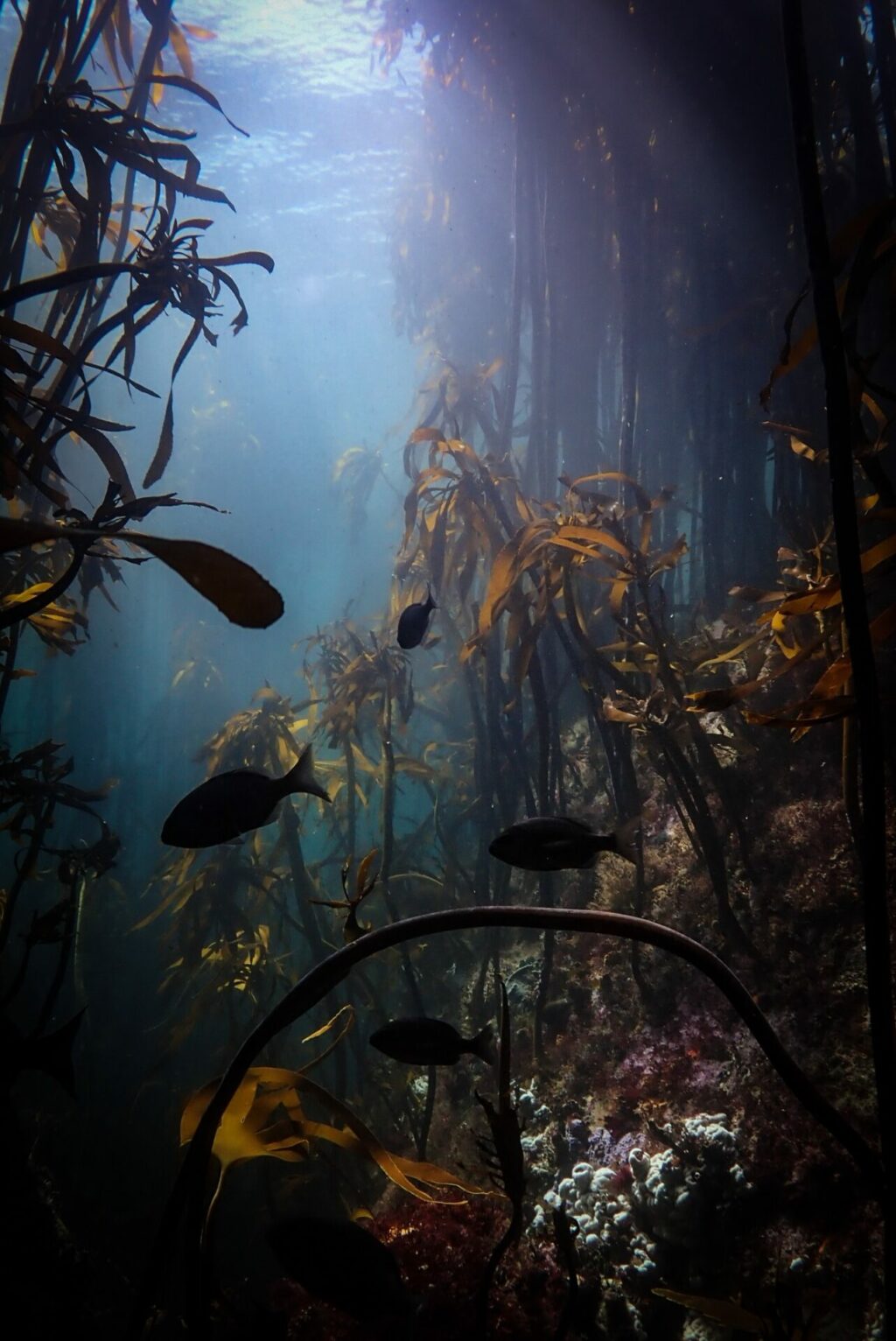 ‘Craig’s story suggests there is so much magic right in front of us.’

How conscious were you of anthropomorphising the octopus, and the relationship between it and Craig?

We were very conscious of this. We were lucky in that we had a human character who could tell his story. Everything unfolds through Craig’s voice and the story you see is an interpretation of what he saw and felt during this year of his life and how he interpreted the animal’s behaviour and her responses to him. The film is not scripted and we are clearly telling a subjective story. Craig didn’t name the octopus because he felt this would undermine her wildness.

We also did our best to get the most appropriate experts involved. We had numerous scientific advisers and a wilderness psychologist on the project, and we flew Professor Jennifer Mather, a leading cephalopod specialist, to Cape Town. She is an ‘octopus psychologist’ and she watched the entire cut with us, commenting on all the animal behaviour she saw. She also shared her views of how an octopus experiences the world. There are certain facts that we know: this is a creature that has lost its shell in evolution, allowing it to grow a bigger brain. This tells you that it has a huge capacity for curiosity, but is also very vulnerable. An octopus’s whole life is a balance between curiosity and fear, so it has developed ingenious tools for protecting itself, like the amazing armouring behaviour we see in the film. Because octopuses only live for a year and a half, they need to be learning machines.

Why do you think this film has resonated so strongly with viewers?

I think it’s partly because of the time we are in. People are feeling disconnected and afraid and are questioning where they find meaning in their lives. Craig’s story suggests that there is so much magic right in front of us, if we take the time to look. We made the film with the intention of giving our audience a glimpse of the experiences we have when diving, so we made it as immersive as possible with everything we did, from the way we shot to the sound and music we used. I think it helped viewers to journey beyond their four walls at a time when many people in the world needed that.

It’s also the subjective, emotional approach. We knew audiences would fall in love with the enchanting and intelligent octopus star and be moved by her story, but she is really a symbol of the natural world. Human beings have had a love affair with nature since before we were even human and the film triggers that ancestral memory. We may forget from time to time, but we depend on nature for our survival.

Connection to nature has always been a critical part of not just our physical well-being, but our mental and spiritual well-being too.

This is an unusual conservation film in that it doesn’t have an overt call to action. Why is that?

This was the biggest debate during the filmmaking process. At the time, there was an issue in False Bay where the octopus lived: octopus traps were entangling and drowning young whales. This made for a strong conservation story, but I felt it would make the film too issue-driven, we would be creating an enemy for the audience. That means that people can take themselves out of the story and blame other people for the environment being destroyed. But actually, this is something we are all part of. We all need to take responsibility.

That said, there are many films that do tell issue-based conservation stories, like David Attenborough’s excellent A Life on Our Planet. We just had a different goal. We wanted to leave people walking away from their screens with a sense of awe and wonder, and motivation to build their own connection with nature in whatever way they choose. We’ve been very surprised by the film’s performance in impact award categories around the world. This is not a traditional impact film, but these ideas around connection and love and the fact that we need nature are very powerful and for some audiences quite novel. I hope this film has had some impact on the world and how we think about ourselves in relation to nature.

Now that the film is out, is there anything that you would like to have done differently?

I do have one regret. I love pyjama sharks. They are my kelp forest spirit animal, but I’m afraid the film has tarnished their image a bit. We cut a beautiful scene of a pyjama shark pup growing inside its egg and then hatching, which we’d hoped would stimulate some empathy for these beautiful but vulnerable sharks. They are also the reason for the octopus’s ingenious defence strategies: it has to deal with predators like pyjama sharks. If there were no pyjama sharks, there would be no armouring behaviour. People have criticised Craig for not protecting the octopus from the shark, but when you spend as much time underwater as he does, you learn to respect and have empathy for all the creatures of the kelp forest. You might have a personal relationship with one special animal, but is it fair to undermine another one? That’s what we want people to ask themselves. 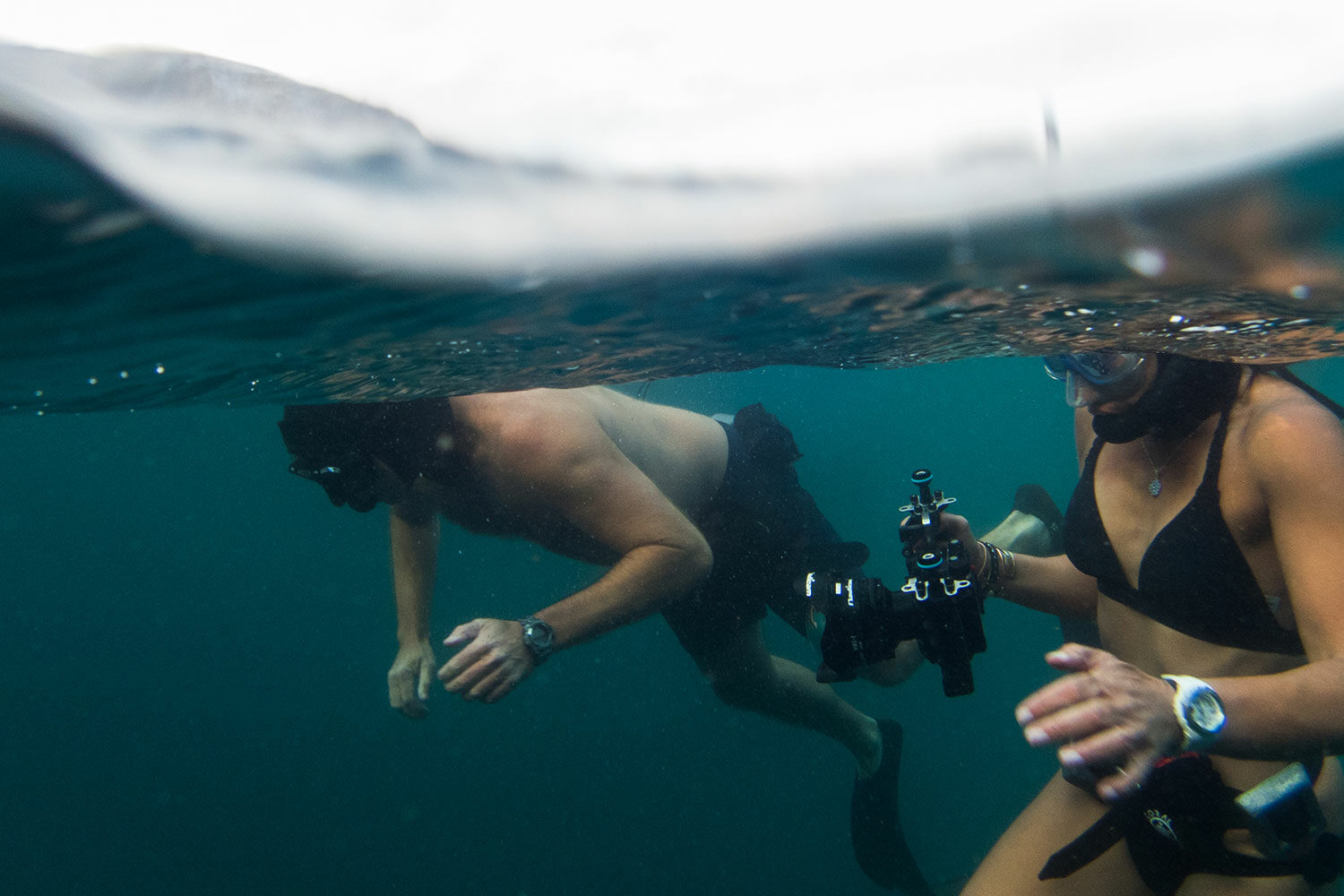 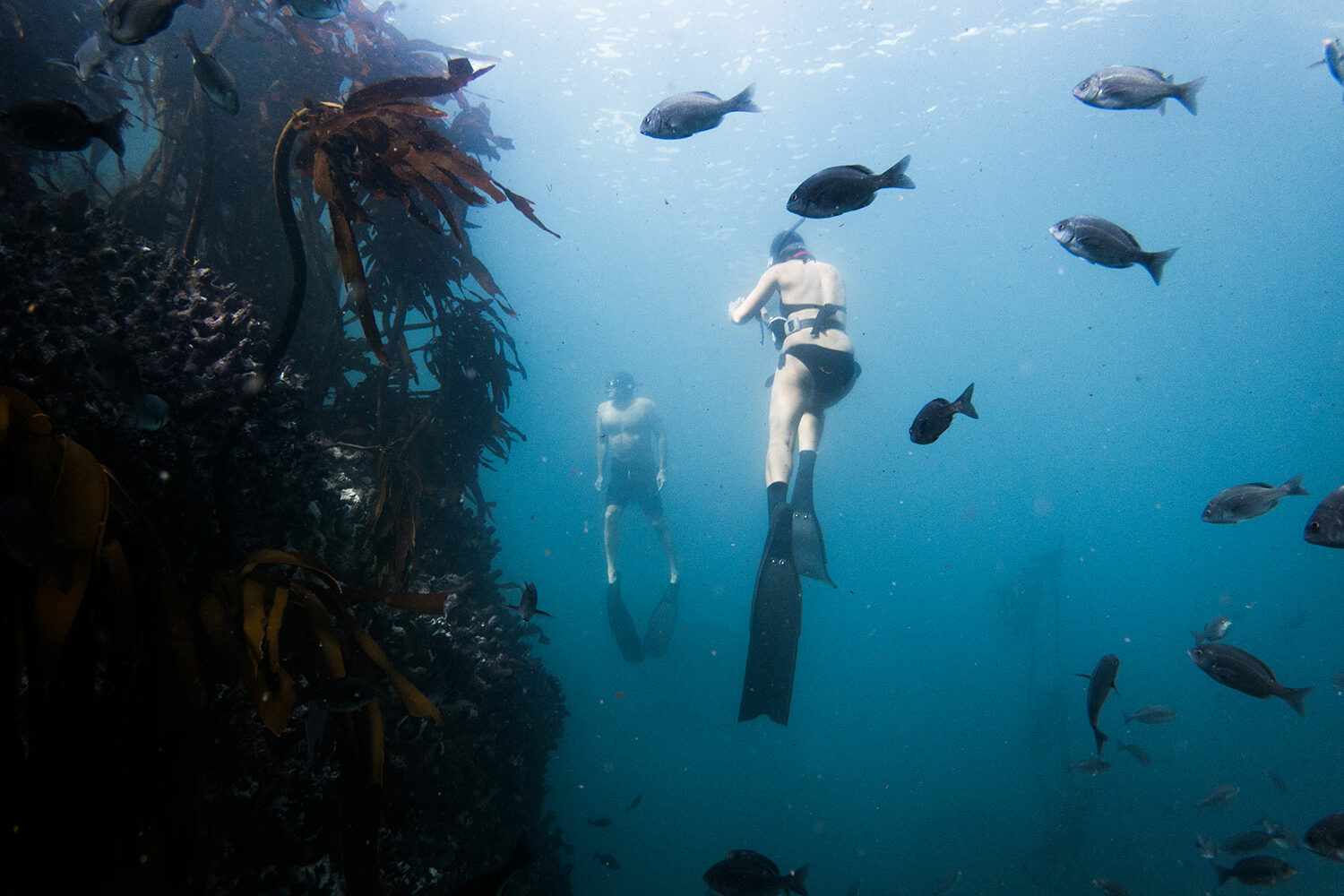 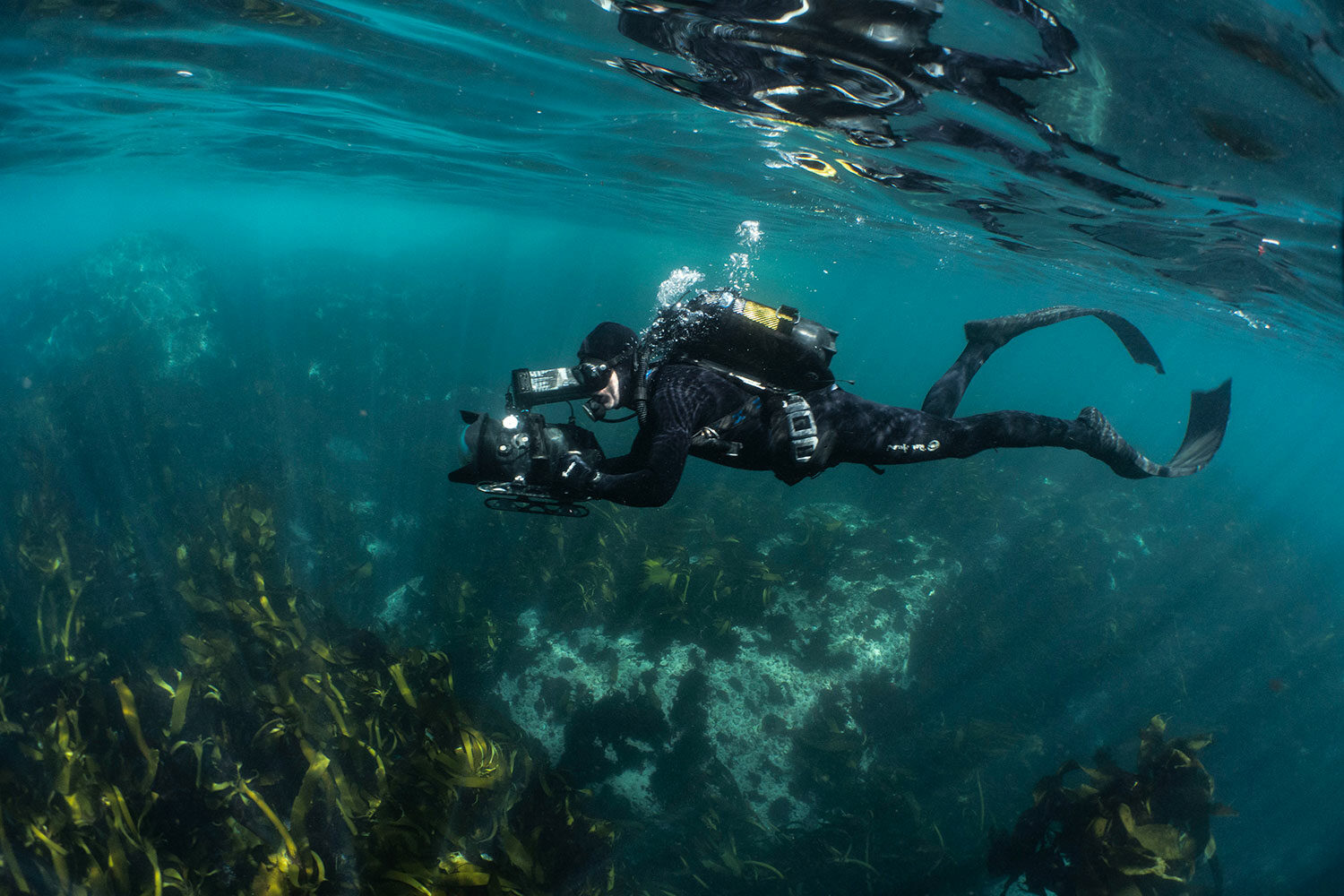