How many sharks are caught each year?

Compared to other commercial fisheries, the shark-fin industry is opaque, secretive, and often operates in a legal grey area, exploiting loopholes in anti-finning laws and keeping few records. In addition to this, reporting can be unreliable and misleading, as member countries of the UN Food and Agriculture Organisation (FAO) report shark catches with varying degrees of detail and accuracy.

The combination of these factors has made it difficult to quantify the global exploitation of shark populations, and has led to significant variation in the numbers that are quoted on the subject. These range from 10 million a year (United Nations) to more than 100 million (various sources), and the discrepancy has hampered efforts to agree on the scope of problem. 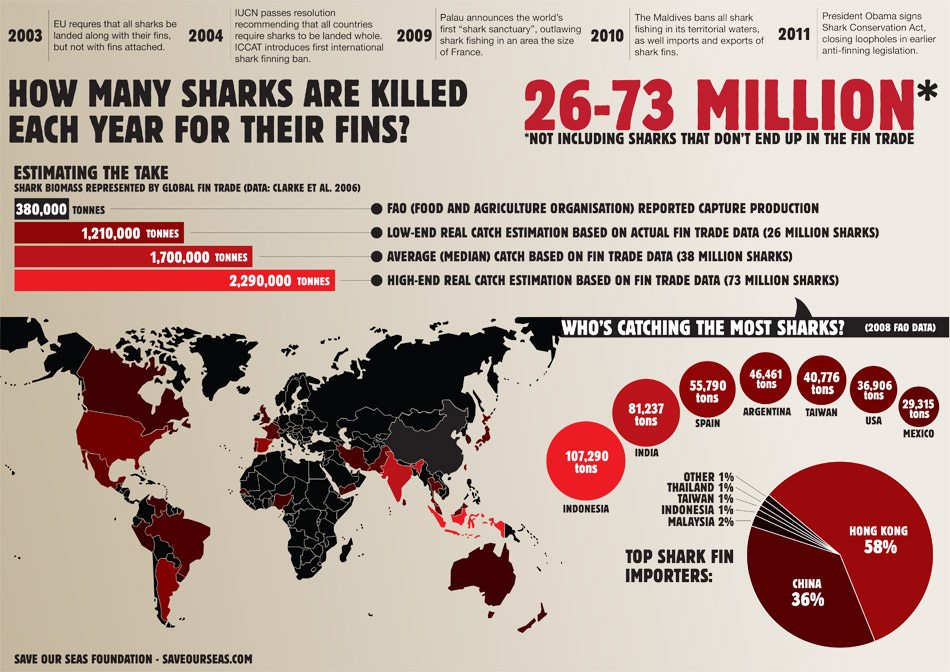 If the numbers vary so much, where does the range of 26-73 million come from?

In 2006, a group of researchers led by Shelley C. Clarke published a study that presented the first – and only – quantitatively-derived assessment of the number of sharks ending up in the fin trade. By using fin auction records sourced in Hong Kong, the world’s largest shark fin trading hub, they were able to estimate the global shark catch to a level of accuracy that had been previously impossible, as well as calculate what the uncertainty of that estimate was. They came up with 26 to 73 million sharks per year, with an overall median (average) of 38 million per year.

How do these numbers compare to FAO data?

Why are the FAO numbers so much lower?

The most likely explanation is a high frequency of shark finning at sea, where the fins are removed from the shark and the mutilated animal is dumped back overboard, often still alive. Though shark finning is prohibited in several countries, including the USA, EU, South Africa, Brazil and Cost Rica, investigations have shown that the practice continues where enforcement is lax.

Removing the fins at sea and discarding the carcass wastes around 95% of the animal, but this frees up space on the boat for more fins, which can fetch up to US$1000 per kilogram. In comparison, prawns retail at around US$6 per kilogram.

What about sharks caught that don’t end up in the fin trade?

The authors of the 2006 study admit that these numbers may underestimate global shark catches. For example, they do not take into account domestic production and consumption of shark fins by major fishing countries such as Taiwan and Japan unless the fins are exported for processing and re-imported. Also, the numbers do not include those sharks which are caught as bycatch and discarded whole. Therefore, the actual number of sharks caught worldwide every year could be more than 73 million..

Demand for shark fins is depleting the oceans of their top predators. This can have a destabilizing effect on the marine ecosystem as a whole, and potentially threatens yields of other commercially important species. Without accurate, species-specific shark catch data, the lack of which is one consequence of finning, sustainable management of shark fisheries is impossible.