Cape Hangklip at the southwestern tip of the Cape Peninsula of South Africa has tricked many a travel-weary sailor of yesteryear. Often enough, in fact, that they named the bay into which they mistakenly retreated False Bay. For early mariners on their return leg from the east, it was all too easy to navigate into the nearly 1000 km2 bay hemmed in by mountains on either side, instead of Table Bay that lies a little further west. Today, there’s no mistaking South Africa’s largest bay: its waterways bustle with fishers, tourists and ocean lovers alike. Now, scientists have pooled their knowledge to chart the past three decades of rapid change in a region that has been used by human-beings dating back 10 000 years. They synthesised all the research done by dozens of scientists and organisations around the bay and showed that our changing climate, surging human population, burgeoning coastal development and rampant overfishing had all changed the functioning of this important coastal ecosystem. Navigating the future of a complex region that still underpins the wellbeing of its citizens, the authors report, will rely on working together. Management approaches, they write, must integrate considerations for both people and biodiversity, and cooperation on interdisciplinary research can help balance the goals outlined for human development, and the protection of the environment and the services it provides. 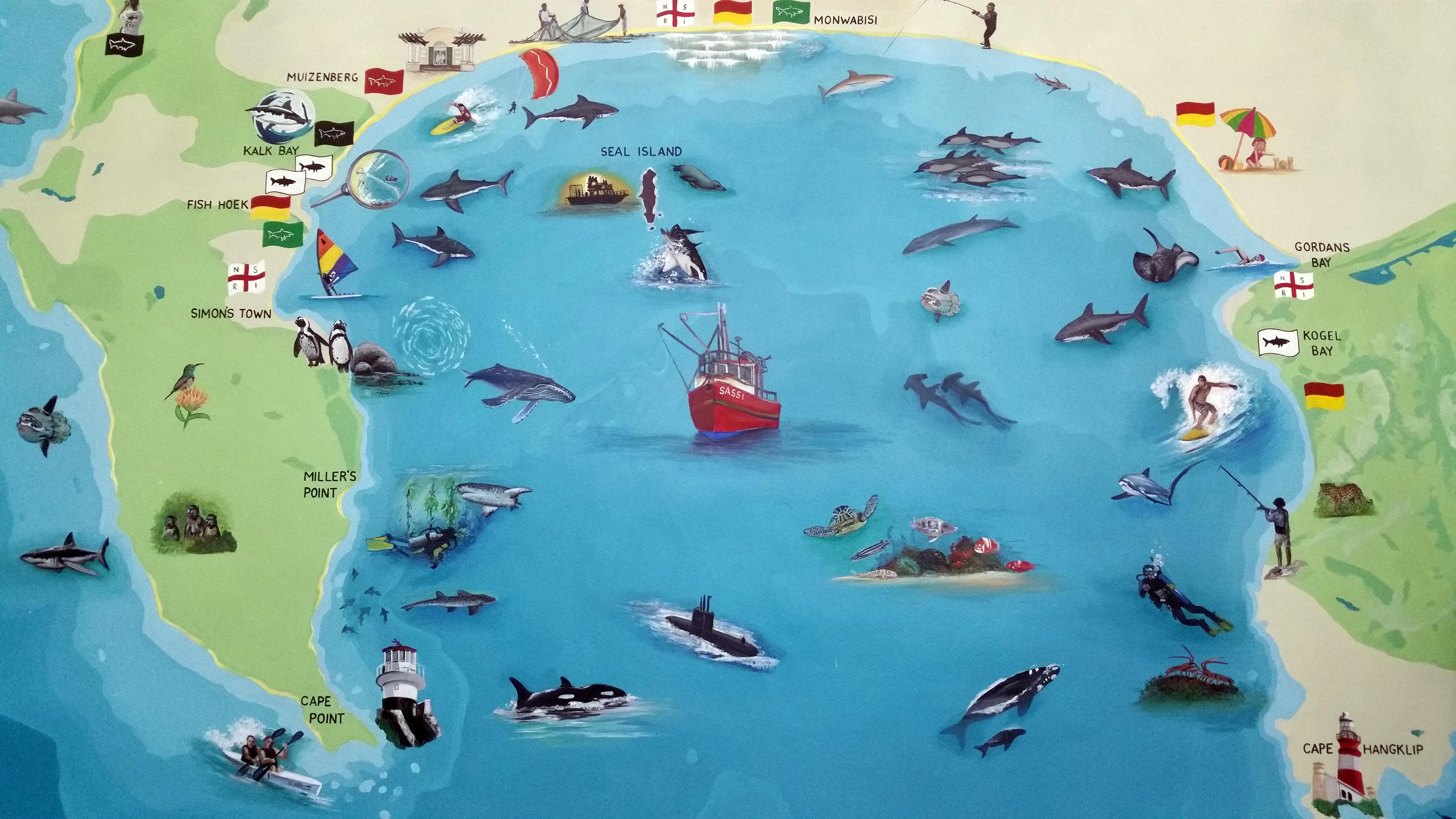 Mural of False Bay. Illustration © Save Our Seas Foundation

Maya Pfaff, a scientist from the South African government’s Department of Environmental Affairs, led the review published this month in Elementa: Science of the Anthropocene. The list of contributing authors included former SOSF Shark Education Centre manager Eleanor Yeld-Hutchings, and white shark scientist Alison Kock, whose work has informed the Shark Spotters programme. From oceanographers to social scientists, environmental economists to fisheries ecologists, the diverse group of regional experts set out to follow up on two previous symposia that had turned the research spotlight on False Bay: one in 1968, and another in 1989. Much has changed in the bay – and in South Africa at large – since the research gaps, priorities and opportunities were first identified and discussed. 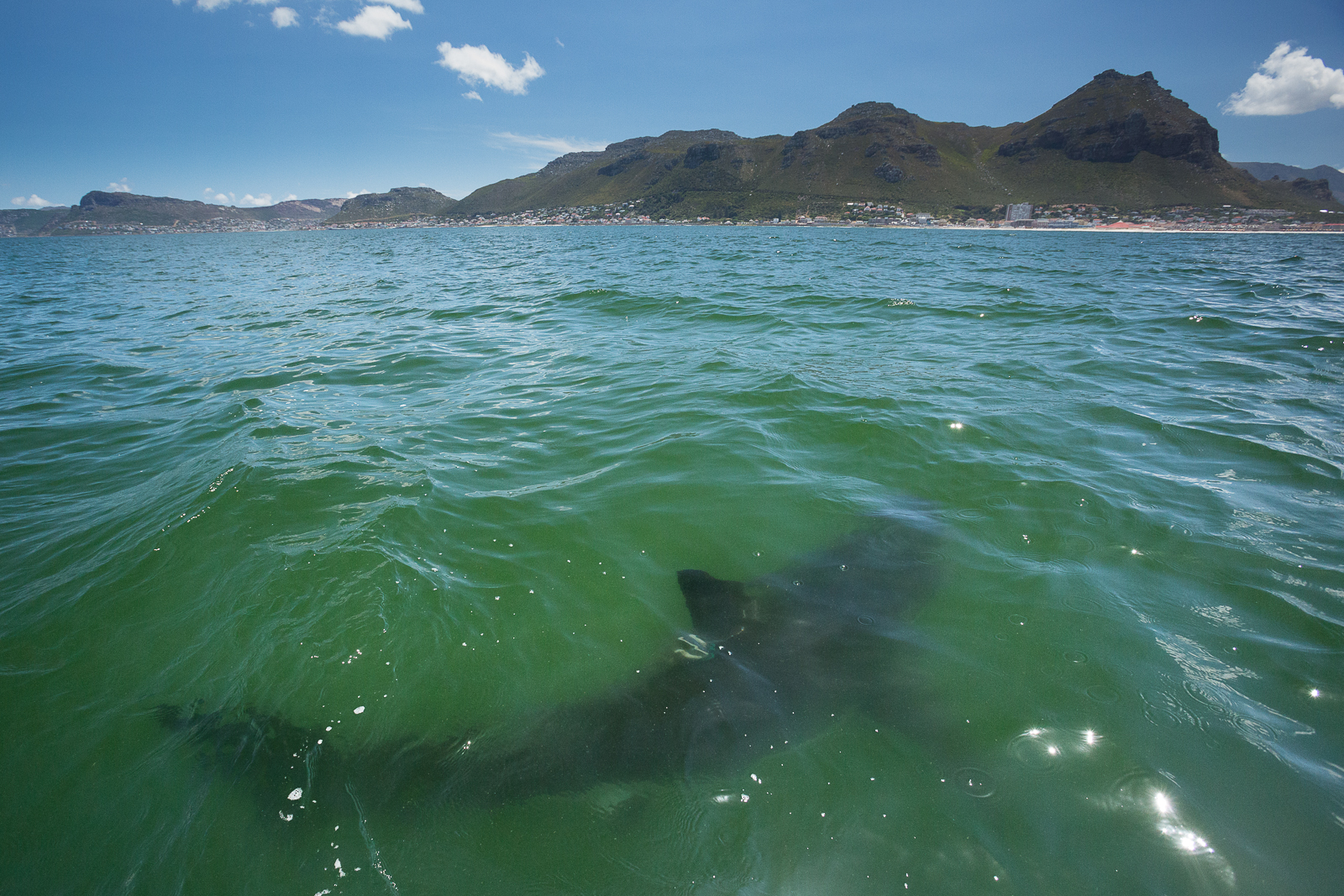 A white shark is seen in front of the populated coastline of False Bay during a Shark Spotters research trip. Photo © Mac Stone | Save Our Seas Foundation

The first democratic government was elected in 1994 with Nelson Mandela as the country’s leader, and the Apartheid regime was formally dismantled. However, much remains to redress for the living conditions, service provision and opportunities for most South Africans – and False Bay is nothing if not a microcosm for many of the issues that play out all along the country’s coastline. For instance, the review reports high levels of illegal fishing, even in the designated protected areas in False Bay, that are cause to revisit effective enforcement of regulations. However, as the authors of the report caution, the way we do so needs to keep pace with our increasing understanding that a more human-centred approach must be the way forward for False Bay – one that acknowledges that the grave historical inequities of this segregated society persist today. The authors suggest that a shift from a traditional “top-down” approach to management in the bay, towards a more inclusive co-governance approach, could help integrate more fairness, accountability, transparency and adaptability. “In general, creating a balance between historically disadvantaged and privileged societal and racial groupings remains the central challenge of South Africa’s political and social system, despite considerable transformation since 1994”, they write. 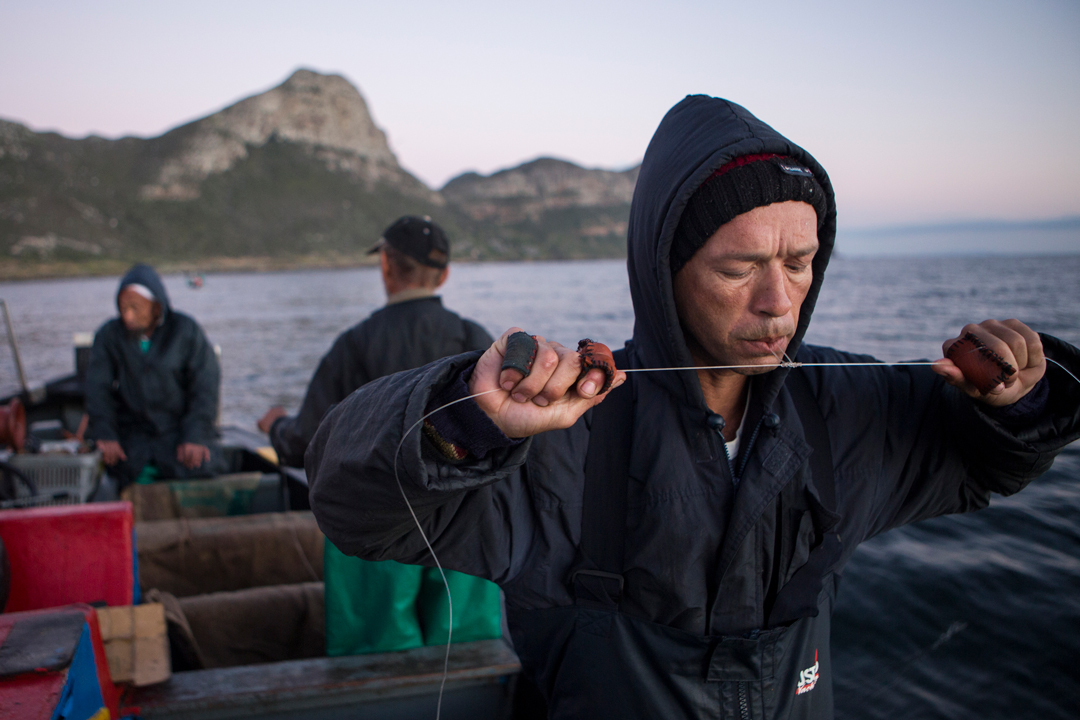 Garth Henry ties a fishing line on hand-line fishing boat Kalky's 5. Henry has been a fisherman for 20 years. Photo © Joris Van Alphen | Save Our Seas Foundation

Upwelling-inducing winds (those that move the ocean’s surface waters further offshore, with the result that cold, nutrient-rich waters are swirled from the depths in replacement and drive the abundance of life found here) have increased in the region, while rainfall seems to have been reduced. The knock-on effects of this are many, varied and complicated: waters have cooled, and there are likely more nutrients available in the system. Kelp, rock lobsters, seabirds and pelagic fish have moved eastwards, along with several alien invasive species. High numbers of beach-goers and fishers, bait harvesting, pollution and coastal development have combined to ensure that the sandy beaches of False Bay are heavily impacted. On the shore, the abundance of white-fronted plovers has declined by 59% in the bay, and numbers of the giant isopod Tylos granulatus have also dwindled. In a study by Linda Harris and her colleagues, Muizenberg beach was identified as “the most impacted beach in the Western Cape Province”. Fishes caught by hook and line have continued to decline in numbers in False Bay. Many of these, report contributing authors Sven Kerwath and Steve Lamberth, have crashed to critical levels – perhaps the result of the continued effort from shore-based angling and boat-based linefisheries (the latter has changed little in 300 years of operating in the bay). However, the yellowtail (Seriola lalandii) has recovered, which came about after the purse-seine fishery was closed in the early 1980s. 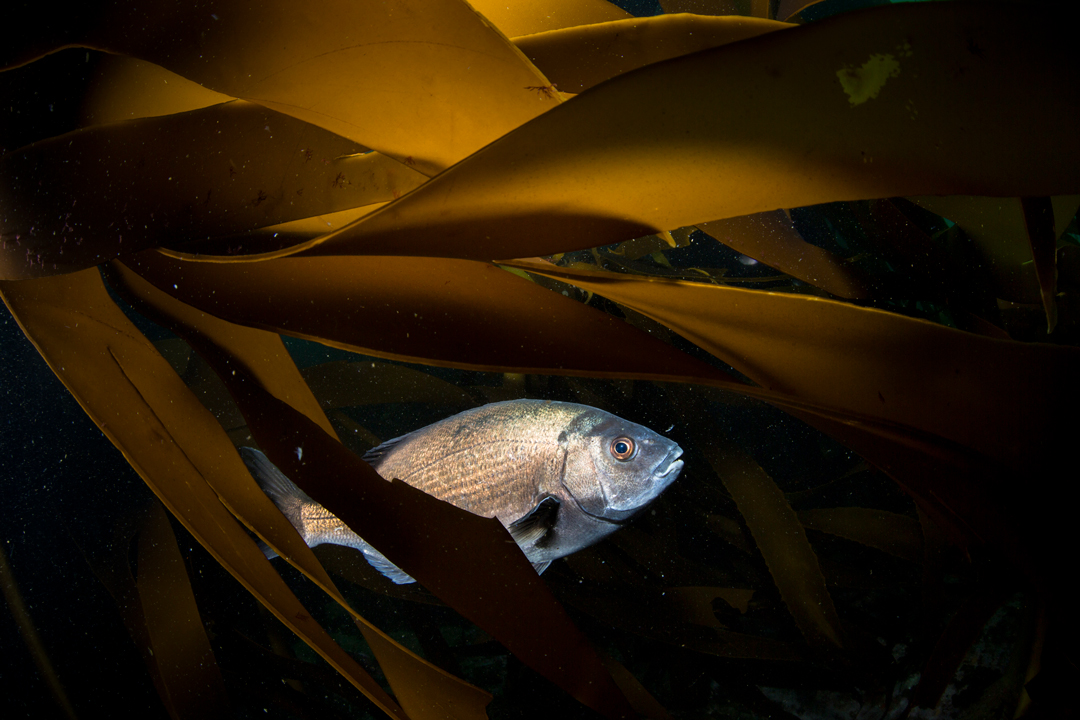 A hottentot seabream emerges from the kelp in the on the False Bay side of the Table Mountain National Park Marine Protected Area. Photo © Joris Van Alphen | Save Our Seas Foundation

Sharks are an important and iconic part of the rich marine biodiversity of False Bay. With 22 different shark species, 14 batoids and one chimaera reported from one study, an emerging market for chondrichthyans, coupled with the increased targeting of their populations to replace other bony fishes that have declined in False Bay, are a concern for the future. The bay is famous as a hotspot for the white shark (Carcharodon carcharias) in particular, and juveniles and sub-adults between 2 to 5 m in length use the region. These sharks are present all year, but move within the bay seasonally. Understanding the population trends for white sharks in False Bay is complicated: at Seal Island, numbers are estimated around 723 sharks, with anywhere between 12 and 287 individuals present in the bay in any given year. Between 2016 and 2018, white shark numbers were reported at an all-time low. The reason behind this is still unclear. Alison Kock notes that it may be that prey has been more abundant further east along the South African coast, shifting white shark distribution over this period, and the arrival of orcas (Orcinus orca) targeting sharks as prey for their livers might also play a role. To better decipher what’s going on with one of the most important top predators in the region, the scientists agree that we need more research into their role in ecosystem functioning, and coherent strategies to monitor the sharks, rays, skates and chimaeras into the future. 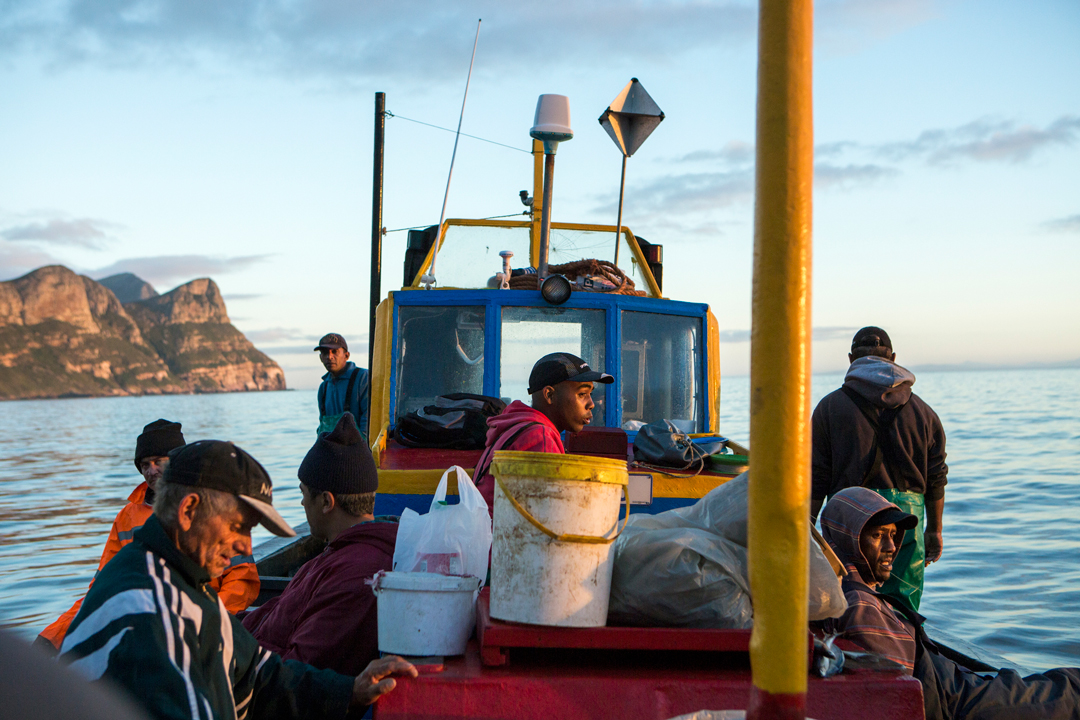 The human population around False Bay has more than doubled since the 1980s, as more people move into urban areas from rural regions. This trend, write the authors, “… has led to intensified exploitation, coastal developments and pollution, largely as a result of poor servicing of sewage, solid waste and stormwater, especially for the rapidly expanding informal and backyard settlements”. For all the change and challenges, environmental education has been key to generating increased awareness of the bay’s value. Innovative conservation programmes have complimented the proliferation of ecotourism and ocean sport activities, and the authors note that: “The formation of the Shark Spotters and its adoption by the City of Cape Town in 2004 was another big step forward in terms of balancing the needs of both people and white shark conservation by proactively reducing the interaction and conflict between recreational water users and sharks, while contributing to research on shark behavior (sic) and ecology”. Tourism, and the non-consumptive use of the coast, makes this False Bay vital to the regional economy and national interest. Jane Turpie, one of the contributing authors, reports that: “The False Bay coast is estimated to generate over R900 million (ca. US$ 63 million) per year in direct expenditure by domestic and overseas tourists. Nearly 80% of this amount is along the west coast of the bay”. 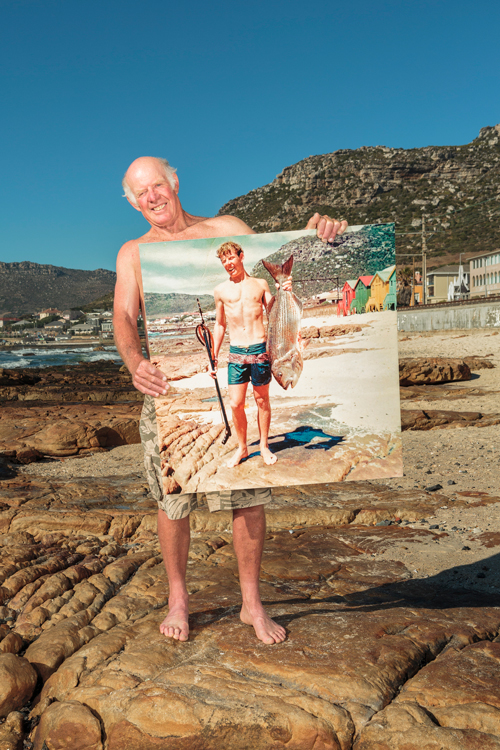 In December 1968, Geoff Fridjhon posed for a photo holding a large white musselcracker Sparodon durbanensis he had caught while spearfishing off Dalebrook beach. A fish of this size would have been close to 30 years old. Forty-six years later Fridgeon stands in the exact same spot holding an enlargement of the photo. Today the species has all but disappeared from False Bay. A white musselcracker can take more than five years to reach sexual maturity, which makes the species highly susceptible to overfishing. Photo © Joris Van Alphen | Save Our Seas Foundation

The review synthesizes many recommended priorities for future research and monitoring in False Bay, across a host of different sectors and stakeholders. These range from standardizing and coordinating the monitoring of the oceanography, to the application of new technologies to help manage large datasets and increase the coverage of the bay and the investigation into the sustainability of fishing practices in the area. Job creation, citizen science projects and regular knowledge-sharing forums can help integrate people, their livelihoods and interests into a shared future in the region. In a bay where history, culture, ecology and economics collide, many voices need to be heard, to support a holistic approach that puts transparency and cooperation first. 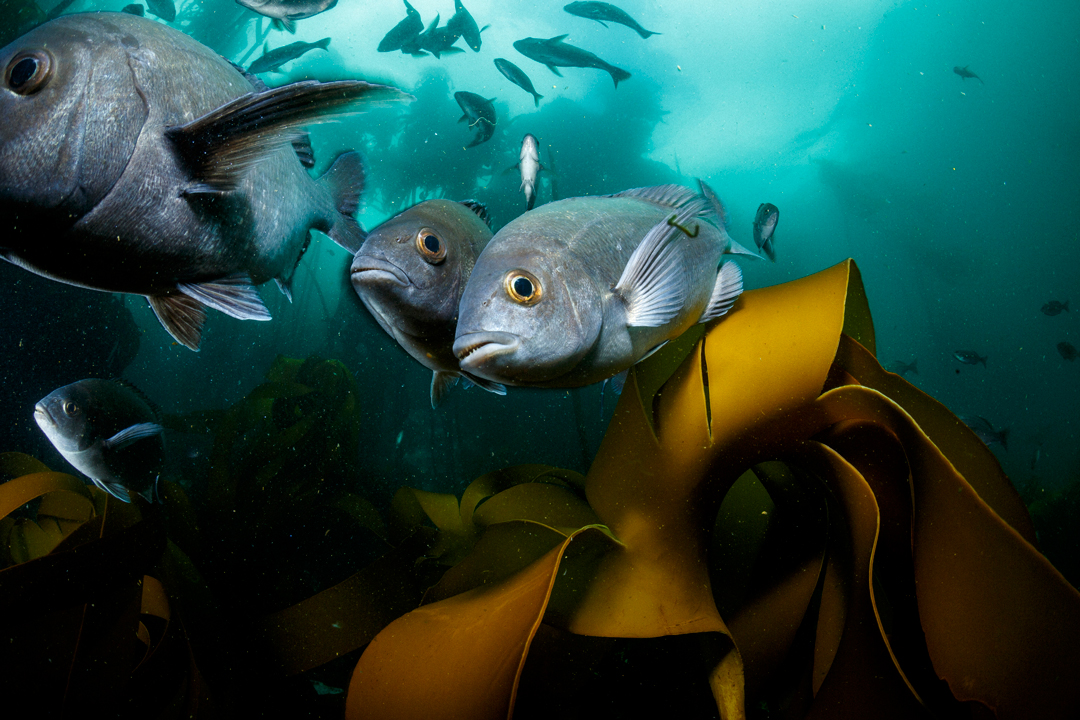