Our keynote speaker, Dr. Christopher Lowe, described how major advances in our knowledge of shark behaviour have been achieved over the last 25 years thanks to the evolution of some key technologies. The original interest to better understand shark behaviour was driven by the military’s interest in protecting personnel and equipment from sharks. Early behaviour research focused on sharks’ sensory systems and basic biology, subjects about which very little was known.

Sharks are global travellers and observing them in the wild is no easy task. The biggest change to shark behaviour research arrived with the advent of acoustic and satellite telemetry. These technologies, which use tags to record a wide array of sensory data, enable scientists to track the exact locations of where individual sharks travel and the temperature, depth, and light levels that they experience on their journeys. Through telemetry we have expanded our knowledge of movement patterns, feeding and mating behaviour, as well as an understanding of the physiology that drives these behaviours. There has been a growing trend in the number of scientists using telemetry technology and in fact, over 20 per cent of the talks at this conference include the use of telemetry. On your next dive if you are lucky enough to come across a shark decorated with a research tag it could belong to one of the scientists attending the conference here. Blacktip reef sharks, whitetip reef sharks, whiptail stingrays in the Amazon estuary, shovelnose guitarfish, manta rays, bull sharks, blue sharks, whale sharks and white sharks are the main characters of some of the tags here that are well on their way to unraveling some of their species’ mysteries.

<!–more–>Dr. Lowe did however warn us about his “shiny new hammer” theory. (You can drive in a screw with a hammer, but it may not always be the best tool.) “Scientists must focus on hypothesis driven questions or, at up to 2,000 USD a tag, they may find themselves on very expensive data fishing expeditions,” said Dr. Lowe.

SOSF scientist Dr. Andrea Marshall (also known as the Manta Queen, from the 2009 BBC documentary) presented her work on seven years of observations of the size, population structure and migratory behaviour of the newly described giant manta ray (Manta birostris). From her base in southern Mozambique Dr. Marshall has identified over 130 individuals at an inshore aggregation site, which supports both feeding areas and cleaning stations. Preliminary data from two satellite tagged individuals have demonstrated that the species is capable of international migration – a crucial consideration for future regional management plans. As well as discovering the species Dr. Marshall has also discovered that this manta is one of the  deepest (reported) diving fish in the sea.

Dr. Jeurg Brunnschweiler later revealed his results on the small-scale movement patterns of bull sharks in the Shark Reef Marine Reserve off the southern coast of Viti Levu, Fiji. More than 60 bull sharks fitted with acoustic tags collected this data, while 14 pop-up satellite archival tags were deployed between 2004 and 2009 to monitor the movement of bull sharks away from Shark Reef and their passage through the water column.

In the beginning shark behaviour research resulted from the need to answer, “How can we protect humans from sharks?” The tide has since turned and, with as many as 73 million sharks killed each year, today we are all asking, “How can we protect sharks from humans?” Collecting and analyzing all this data is a giant step towards providing some answers to this question.

The day ended with the Oceania Chondrichthyan Society (OCS) dinner.  Not only was it an evening of mingling with some of the brightest and most passionate minds in shark science, but we were also treated to the presentation of a new shark species Pseudogaleocerdo idioti (a rather cuddly, fluffy, and soft-toothed type of tiger shark). 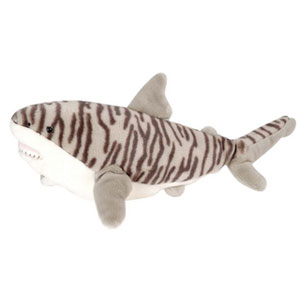