New research from the Save Our Seas Foundation D’Arros Research Centre, in collaboration with the Marine Biological Association of the UK, enhances the design of a marine protected area.

How do you decide on the size and shape of a marine protected area (MPA)? Over 9,000 MPAs have been established worldwide, varying immensely in size from less than 1 km2 to over 600,000 km2. The location, size and shape are usually determined by what you want to protect, but are rarely based on the movements of the target species. Although there are very large, blanket MPAs intended to protect entire regions (e.g. Chagos), MPAs are typically implemented for quite specific targets, with most being less than 3 km2 in size.

In the Seychelles, for instance, MPAs have traditionally been established to protect particular seabird colonies, coral reefs, or turtle nesting beaches. As such the MPAs in Seychelles typically only extend ~400 m offshore (up to 1 km at the largest in Aldabra), as this has been deemed sufficient to cover the reefs and nesting beaches for turtles.

However, a reserve designed for one species may fall short of protecting others, and therefore the ecosystem as a whole. Sharks, for example, are important predators that help promote ecosystem stability through the pressure and risk of predation on their various prey. Meanwhile, hawksbill turtles sculpt the reef as they forage, and mediate competition for space between sponges and hard corals. Yet both may range beyond the boundaries of MPAs established for other species, risking continued exposure to fishing pressure. 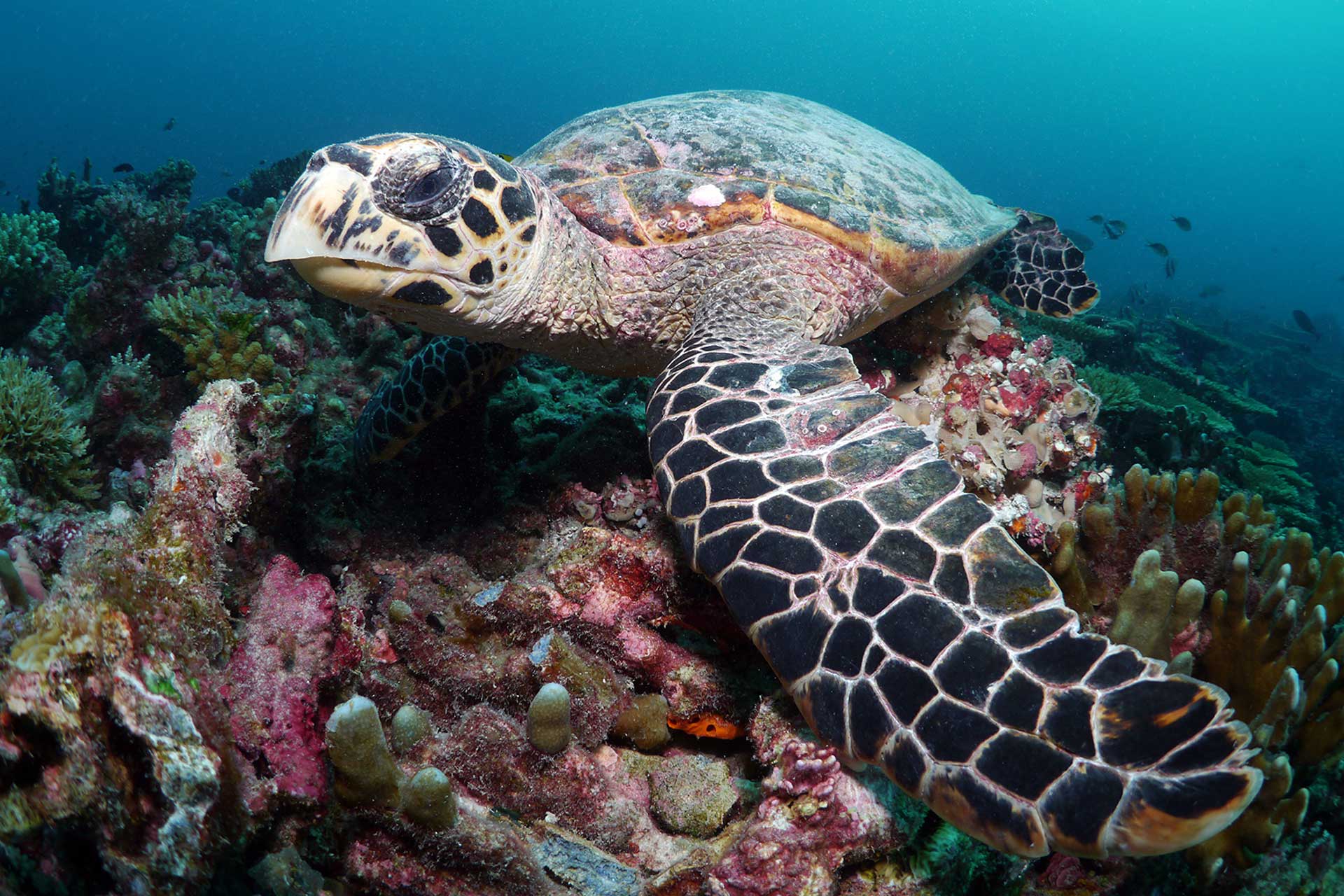 D’Arros and St Joseph are home to a high abundance and diversity of shark species, so the Save Our Seas D’Arros Research Centre (SOSF-DRC) team set out to assess how sharks and turtles might use an MPA based on the current best model in Seychelles – 1 km from the beach at Aldabra – and how this could be modified at D’Arros to provide better coverage of shark and turtle movements.

“We tracked over 140 sharks and turtles with acoustic tags around D’Arros and across the Amirantes for over three years. This provided an abundance of movement data that really helped us delve into the habitat preferences of the different species and examine how effective different MPA designs might be” explains James Lea, lead author on the new study published in the Proceedings of the Royal Society B.

The team discovered that the current best boundary in Seychelles – 1 km from the beach – falls short of protecting several important habitats frequently used by sharks and turtles around D’Arros and St Joseph.

“This is because of the unique topography of the islands” reveals Dr Rainer von Brandis, Director of the SOSF-DRC and co-author on the study “St Joseph atoll in particular has an expansive reef flat that can exceed 1 km width, so if an MPA boundary of 1 km is measured from the beach it fails to cover all of the reefs surrounding the atoll and all of the lagoon within it.”

The team showed that the lagoon in particular was critical nursery habitat for a variety of species, including blacktip reef sharks, sicklefin lemon sharks and hawksbill turtles. But now with an appreciation of shark and turtle movements and local topography, the team were able to test how the potential MPA boundary could be improved. Instead of measuring the 1 km from the beach, they instead took it from the edge of the reef flat, which is exposed at low tide. This pushed the boundary out across the reefs and the entire lagoon, and increased the MPA size by over 50% to 65 km2.

“This slight tweak to the boundary definition made a significant difference to the MPA’s size and efficacy” says James Lea “Coverage of shark and turtle movements increased by an average of 34%, with numerous individuals now spending all of their time within the confines of the larger MPA.”

Indeed, this larger MPA design went on to become the D’Arros and St Joseph Special Reserve, providing a rare example of how understanding animal movements can help inform conservation policy directly. It is hoped that protection of such an important nursery habitat – the only atoll of its kind in the Amirantes, and one of very few across all the Seychelles – may help promote recruitment into local shark and turtle populations.