What is a blue-green algal bloom?

A bloom is used to describe an event where millions of microscopic, single-celled plants called algae, normally present in waterbodies, reach concentrations high enough to discolour the water (read more). In the case of blue-green algae,  the cells that are usually present in aquatic environments grow in numbers higher than normal, and a bloom can cause clear water to become cloudy in a matter of days. The water may look green, form a scum at the surface and might turn blue and smell bad when the algae are dying off. Winds tend to push some floating blooms to the shoreline of lakes and along rivers where they become more noticeable to human-beings. 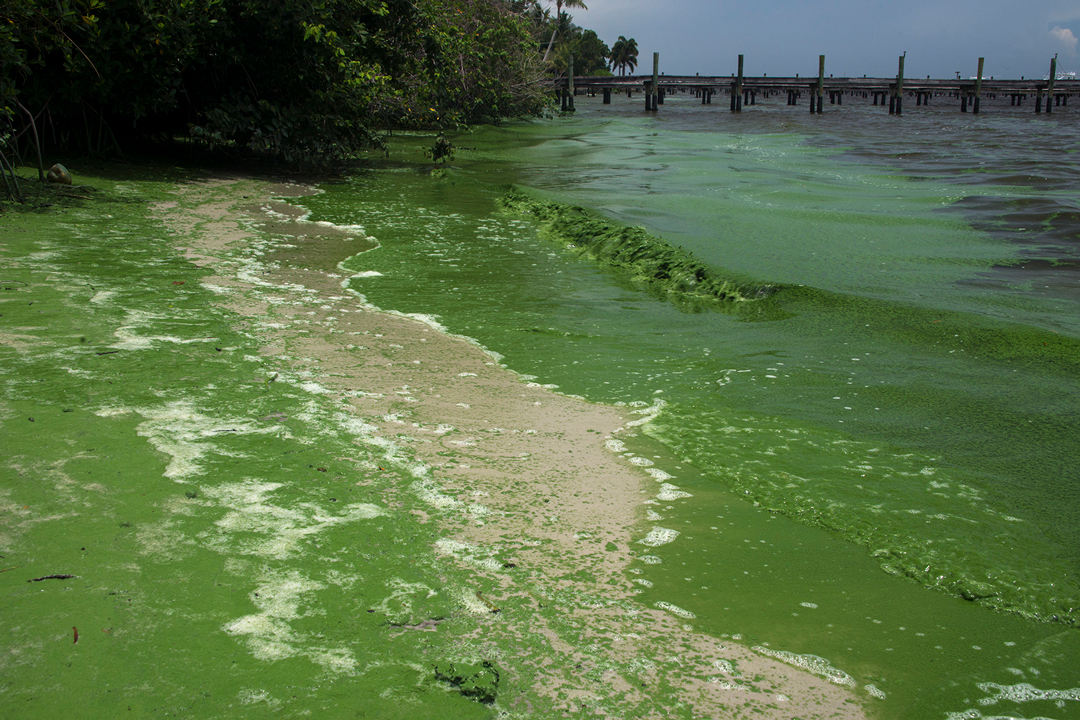 Who is the guilty single-celled organism?

Tiny, aquatic plants called cyanobacteria are responsible for blue-green algal blooms. These single-celled organisms are photosynthetic: that is, they make their own food using energy from the sun, just as plants on land do. They’ve been found to share some characteristics with bacteria, hence their rather odd name for tiny plants. In Florida, three particular species are notoriously common and may sometimes release toxins: microcystis, anabaena and cylindrospermopsis (read more). 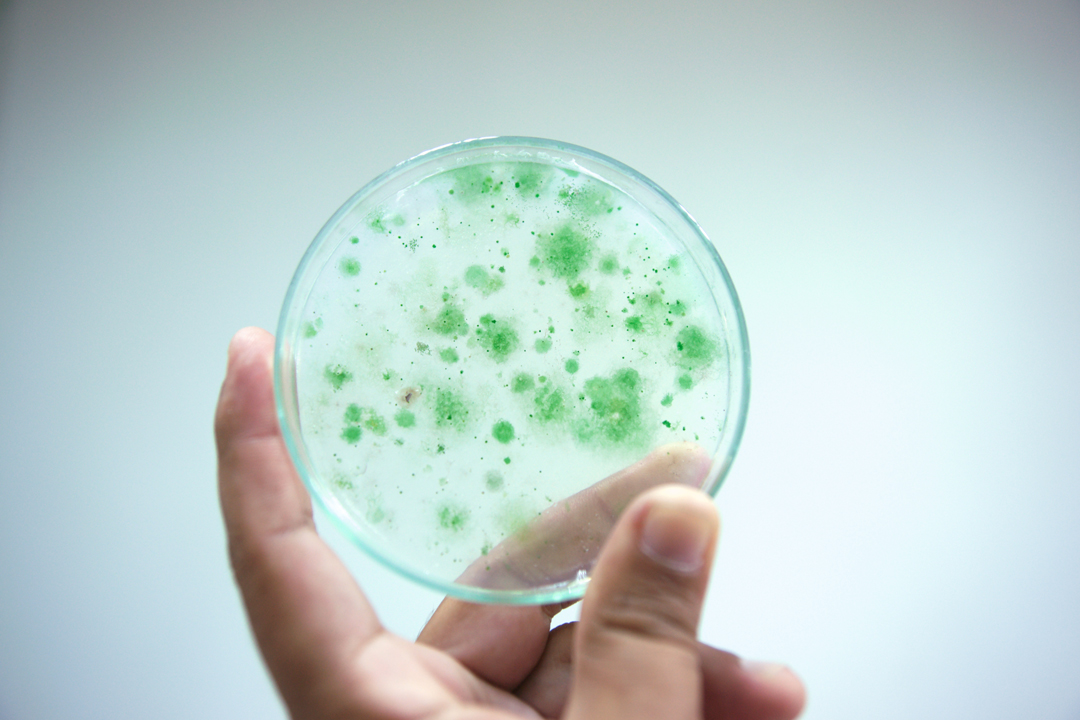 What’s the difference between a blue-green algal bloom and a red tide?

Both phenomena are caused by microscopic, single-celled organisms. The cyanobacteria responsible for blue-green algal blooms are occasionally found in the ocean, but more often than not, they only reach high enough levels to constitute a “bloom” event in lower salinities.  They cause algal scum to form at the water’s surface in freshwater systems like lakes and rivers.  Conversely, the dinoflagellate species that cause red tides is only found in saltwater and so this is a marine phenomenon (read more).

Cyanobacteria are normally found in waters around Florida and are part of a healthy, functioning natural environment. These tiny plants are the building blocks for life on earth, and they’re a necessary part of the food chain. Their typical concentrations are low enough not to discolour the water, or come into noticeable contact with people and animals. Sometimes, a suitable combination of conditions come together to boost algal numbers to bloom concentrations: for instance, sunlight, warm water and increased nutrients such as nitrogen and phosphorous. Blooms can happen at any time, but are common in late summer or early fall (read more). 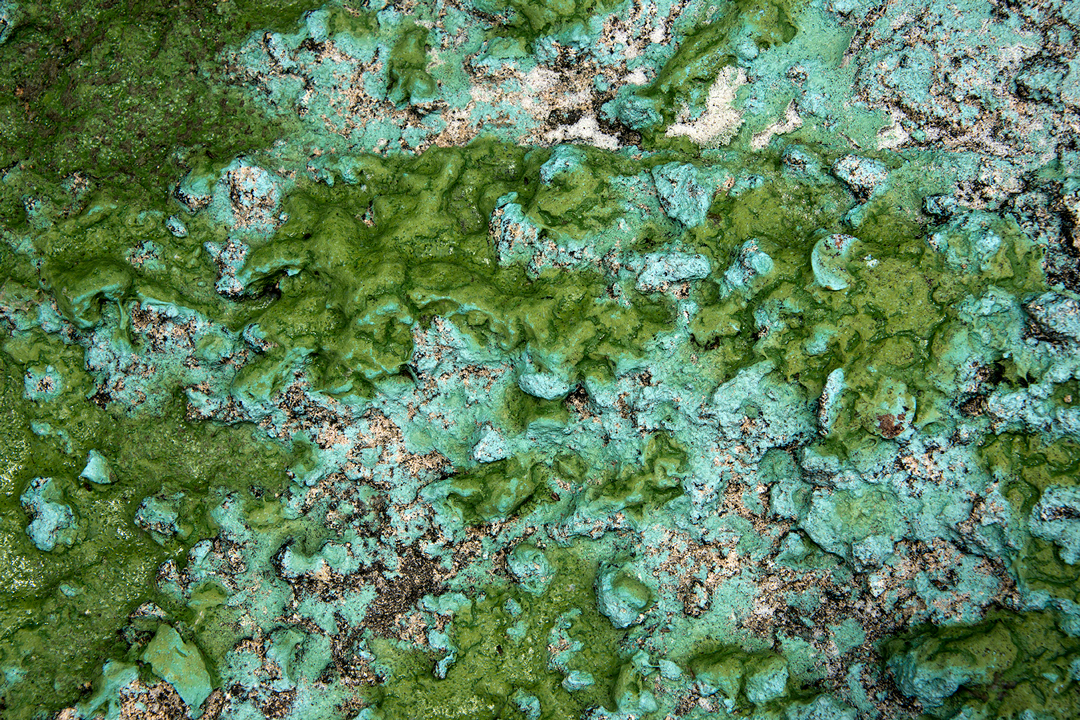 Some species of cyanobacteria contain toxins that can range in their intensity and impact, from gastrointestinal complications to respiratory problems, and even the death of animals (read more). Cyanobacteria in high concentrations can affect the liver, nervous system and skin. When blooms are present, the Florida Department of Health recommends that people avoid these areas and are careful with swimming in or drinking from water containing blue-green algae (read more).

Why is everyone talking about these blooms?

Blue-green algal blooms have persisted in estuaries on both coasts downstream of the St. Lucie and Caloosahatchee watersheds and from Lake Okeechobee (read more). In these cases, the link has been made between polluted runoff into these freshwater systems, and the blue-green algal blooms. The levels of nitrogen and phosphorous, two major fuelling factors that contribute to blooms, are especially high in these lakes and rivers because they run off from neighouring farmland and their fertilizers, as well as improperly managed septic systems.  These blooms persist at the same time that a long-lasting red tide impacts the Florida coast. Governer Rick Scott declared a State of Emergency in seven Florida counties (covering Palm Beach, Martin, St. Lucie, Glades, Hendry, Lee and Okeechobee) in July.