Did you know that we have large underwater forests around the shores of Cape Town?

I am referring to the plants (known as seaweeds or algae) that grow in the sea.

The kelp weed or sea bamboo (Ecklonia maxima) is the largest algae and resembles a tree growing on land. It has a long thin stalk and may grow up to 15 metres tall. 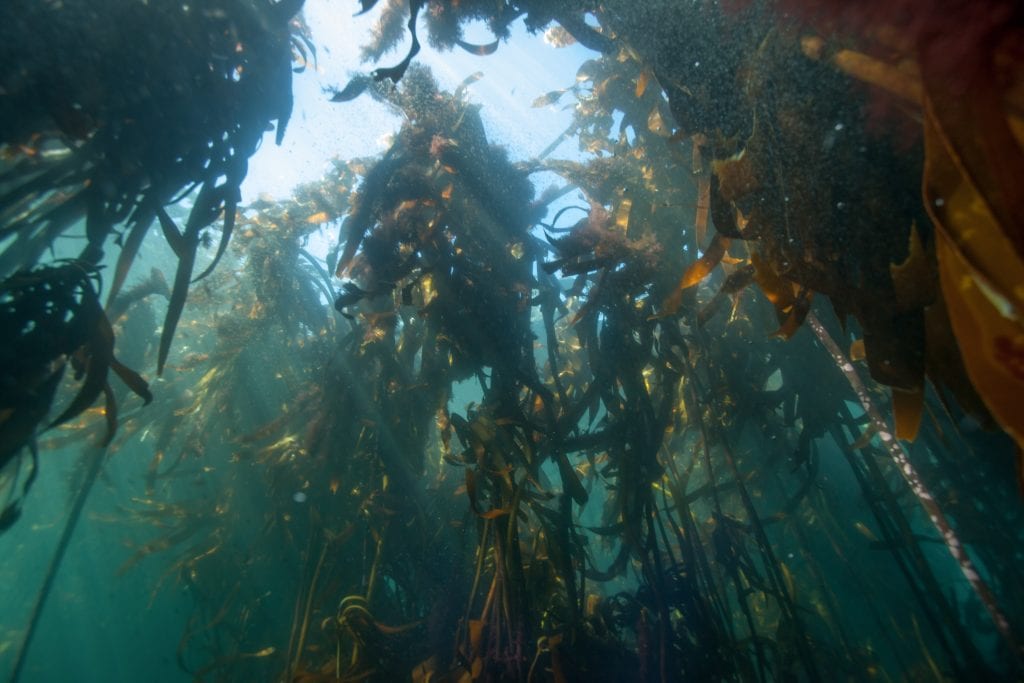 Kelp forests break the force of waves near the shore and provide shelter and food for many marine animals. 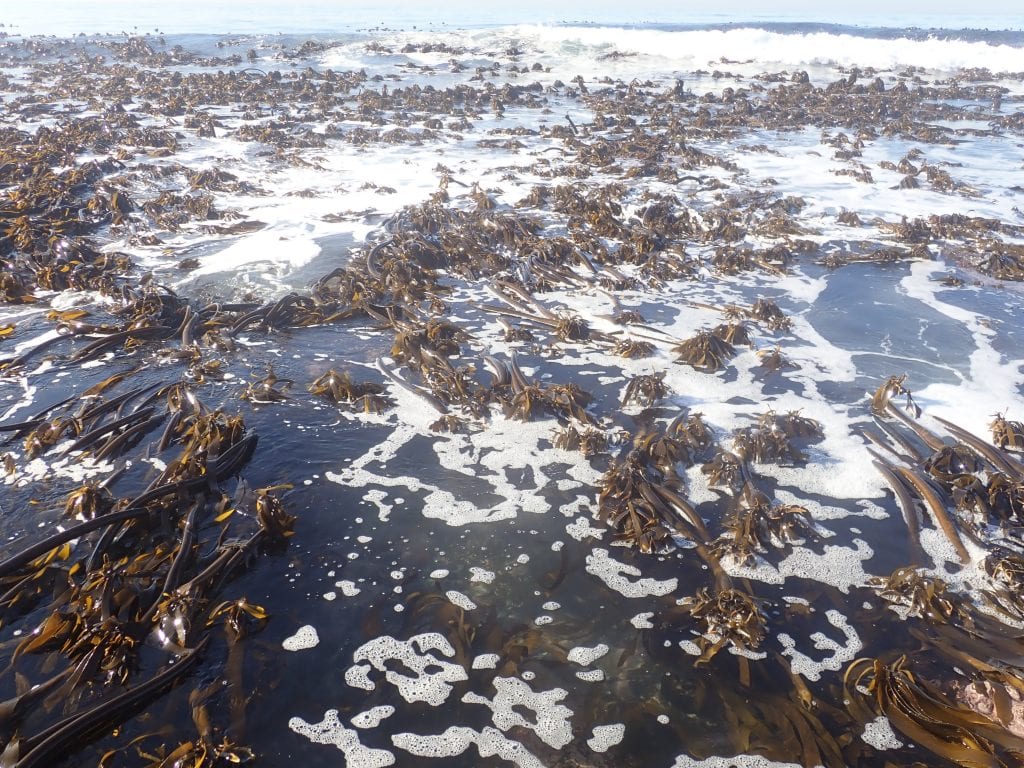 Instead of strong winds, kelp has to cope with powerful waves bashing it against hard rock. Kelp is covered in a slime called mucus. This slime helps it slide over sharp rocks reducing damage to the plant. 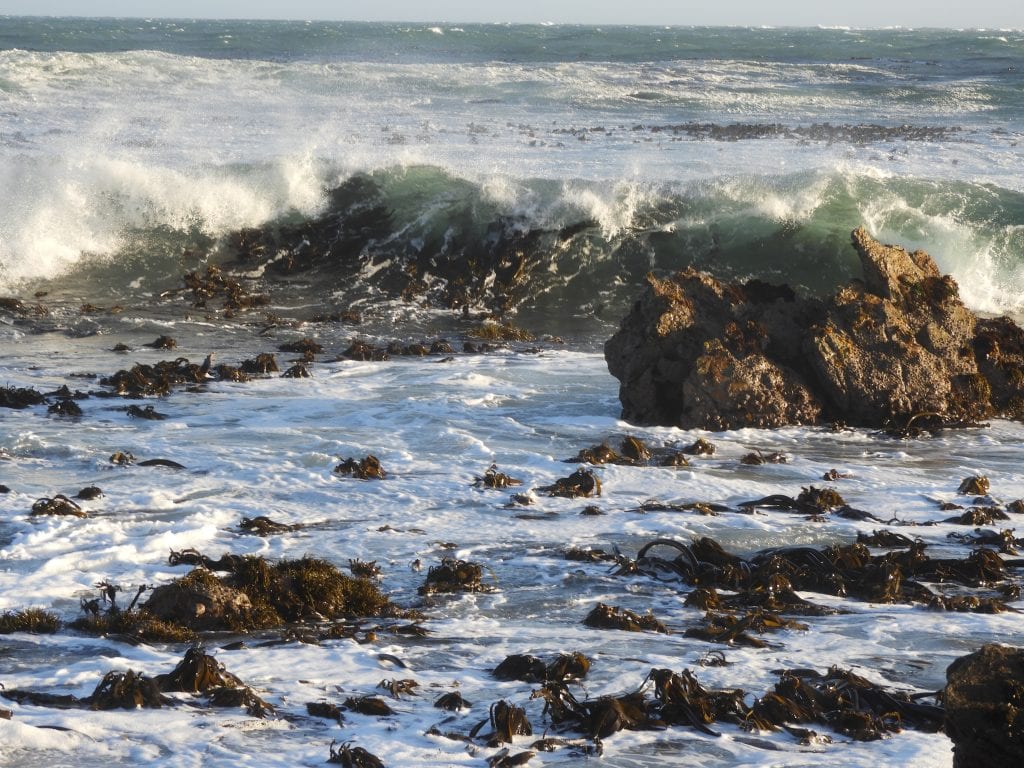 Plants growing on land use their roots to anchor them in the soil. The roots spread out far and deep into the soil to find and absorb water and mineral salts. The stem is strong to hold the plant up in the air and filled with tissue to transport water from the roots to the leaves. 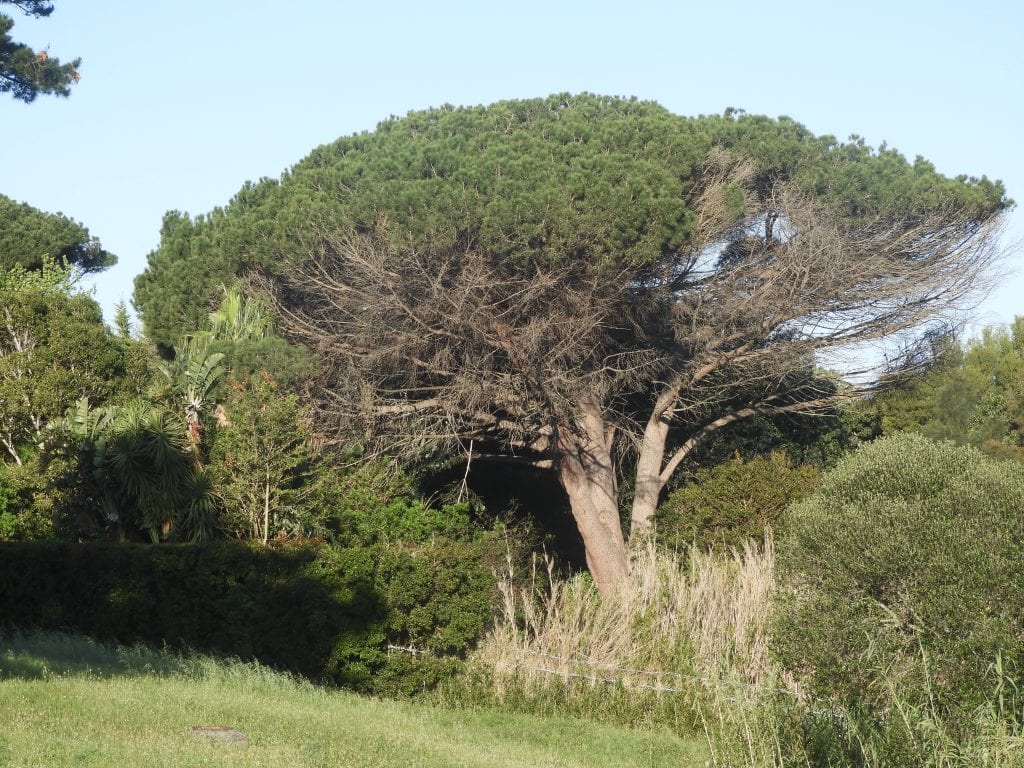 Unlike terrestrial plants, algae take water and mineral salts in through their leaves from the surrounding water so their roots don’t need to do this job. Their roots are small and known as holdfasts. The roots secrete a strong glue which fastens them to solid rock. The photograph above shows the holdfast of a large kelp plant and a new kelp plant just starting. 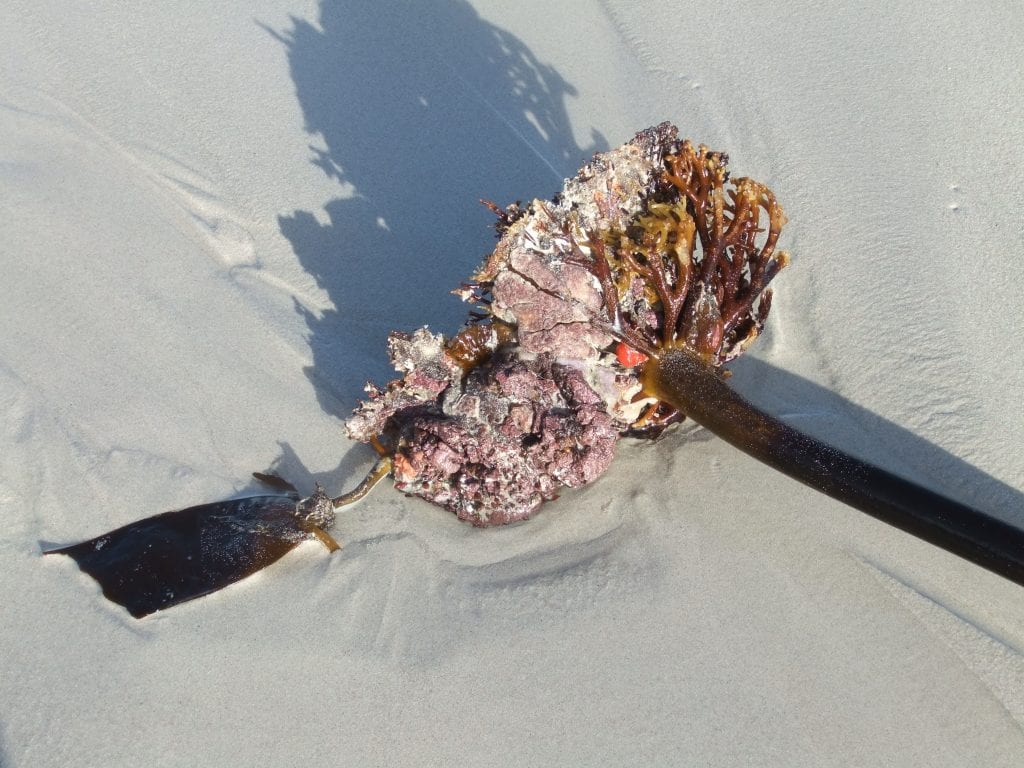 The kelp stem does not need to transport water from the roots to the leaves so it is a hollow, air filled tube known as a stipe. The stipe does not need to hold up the leaves because they are supported by the surrounding water. This photograph of a whole kelp plant shows how small the holdfast is and how thin and pliable the stipe is. 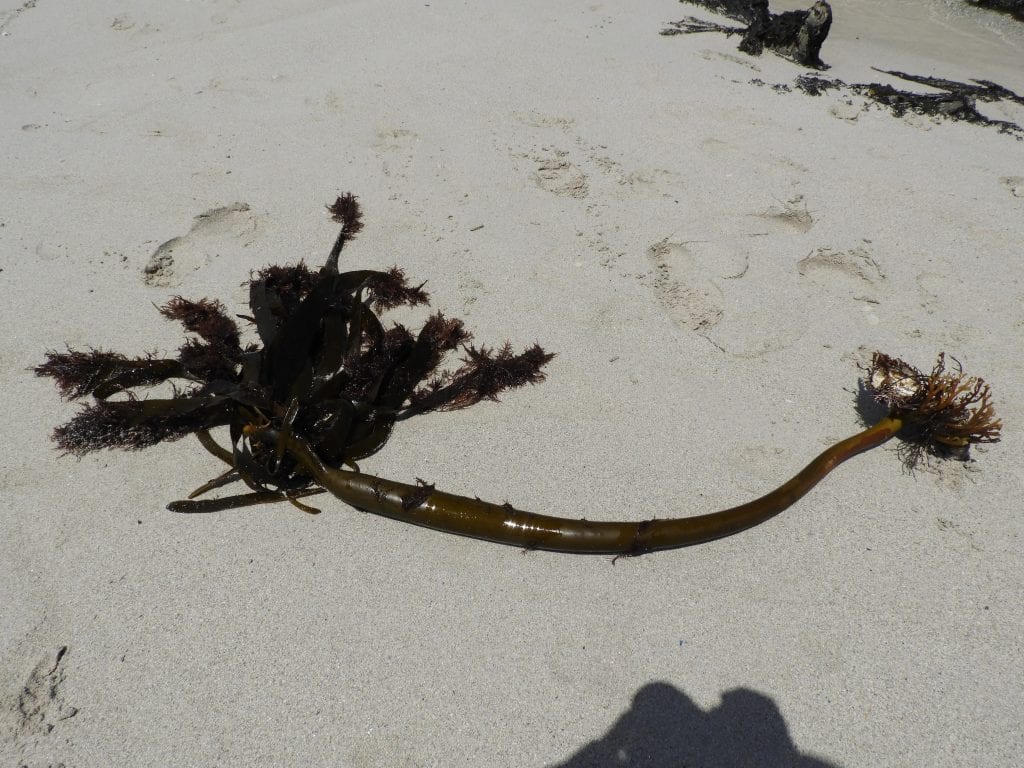 Kelp washed up on the beach. Photo © Tom Campbell

Kelp leaves are long and thin and called fronds. They have been recorded growing up to 13 mm per day! Small pieces of plant are continually broken off the tips of the fronds when they are bashed against rocks by wave action. These pieces are food for millions of little floating and sedentary sea creatures. Can you see a second type of frilly seaweed growing on the kelp fronds? A plant growing on another plant is called an epiphyte. 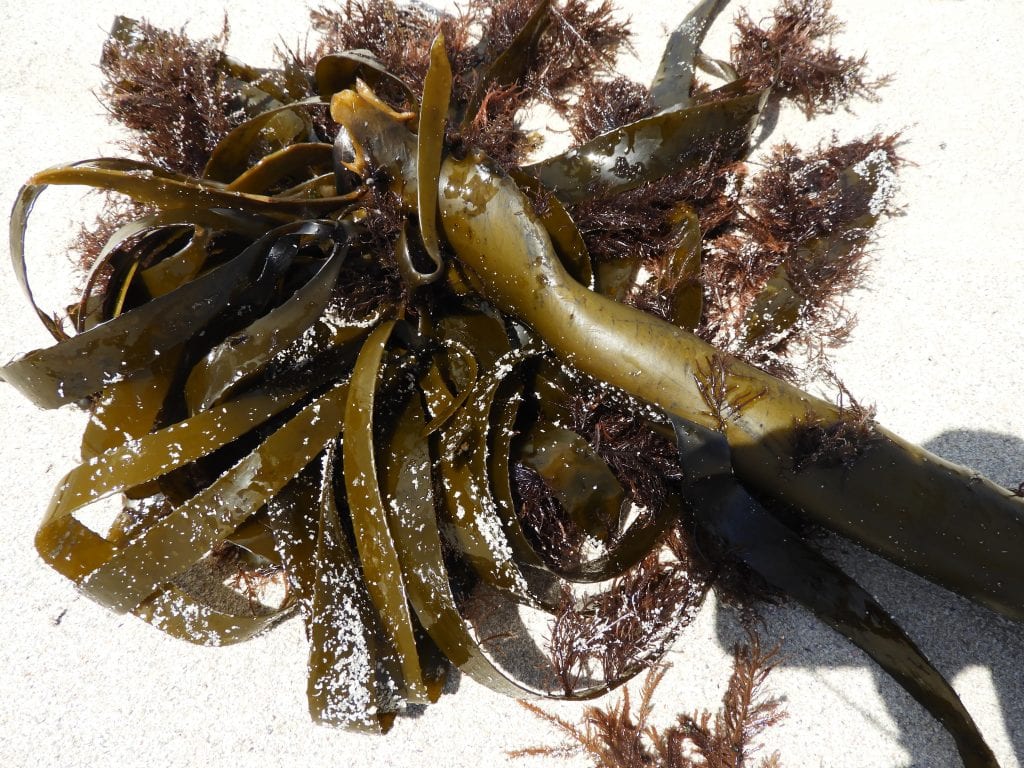 When there are storms, whole kelp plants break off the rocks. The air-filled stipe ensures that the dead plant washes up on the shore. Humans don’t like the smell, but the rotting plant provides food for millions of little creatures. 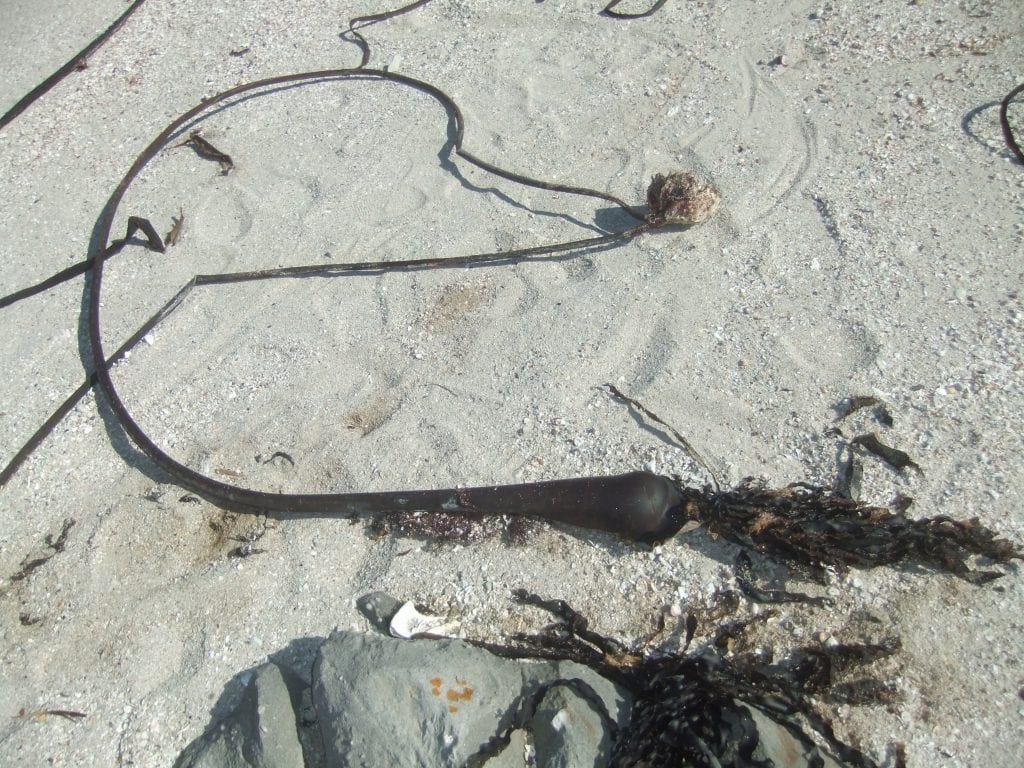 If you move a piece of dead kelp on a sandy beach you are sure to disturb thousands of beach hoppers (amphipods) which were busy feeding on it. They form the base of a food chain for a variety of larger animals, for example birds. Can you spot the oyster catcher chick hiding in the kelp fronds on the beach? 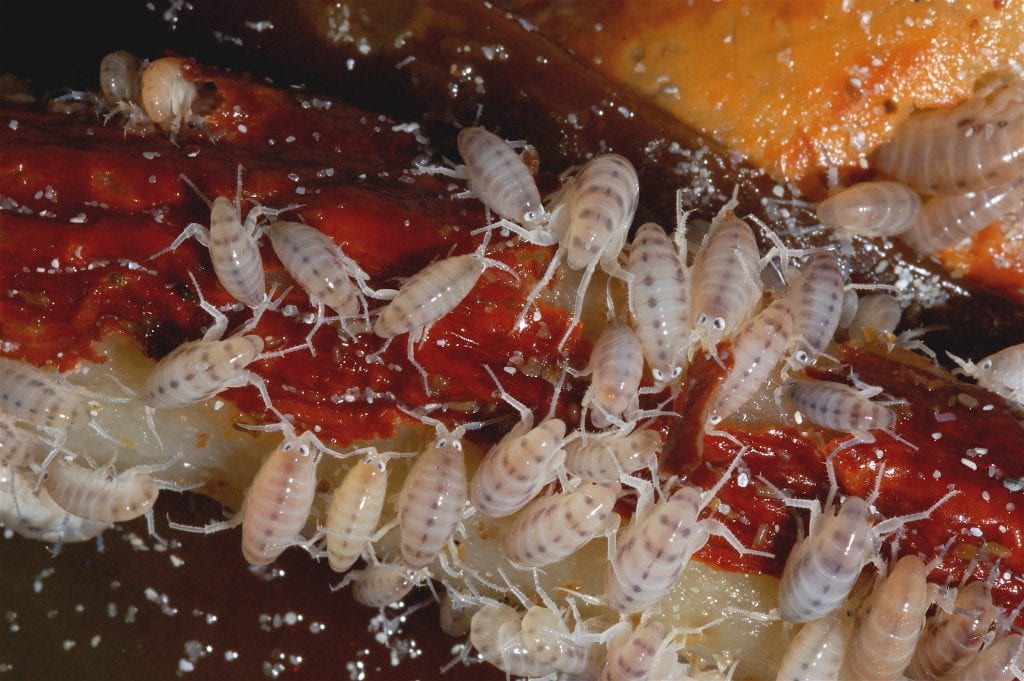 Beach hoppers feeding on a piece of washed up kelp. Photo © Charles Griffiths 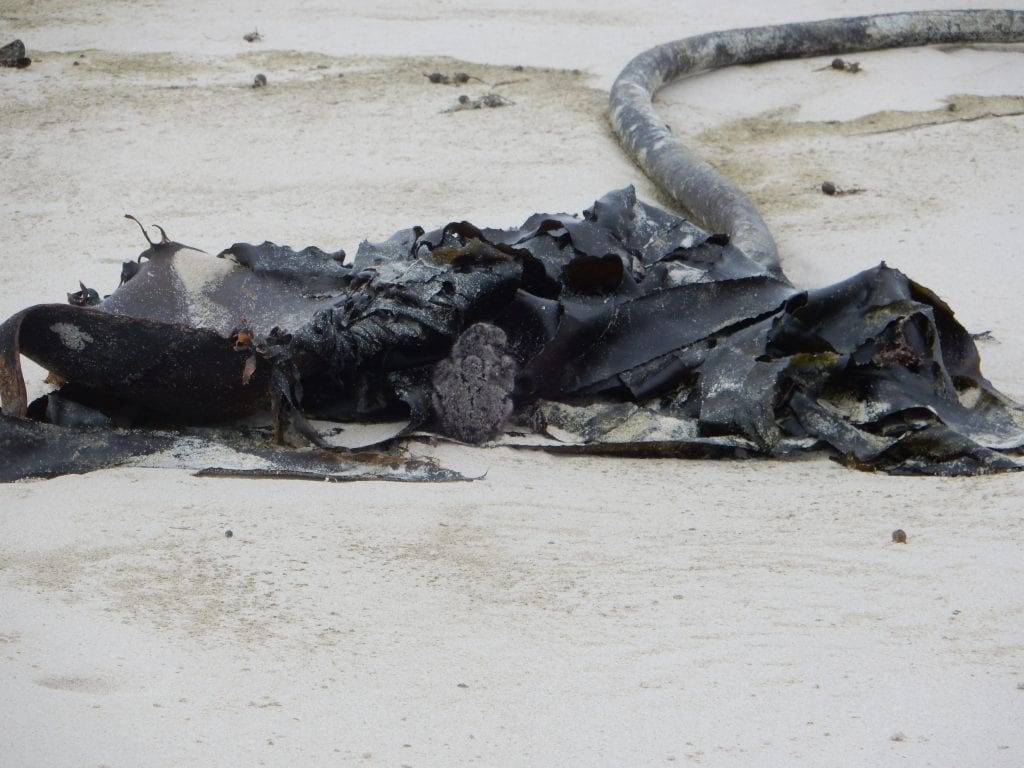 As you can see, kelp is used for food and shelter by many marine organisms, but did you know it is also harvested by humans? Products made using kelp extracts include: fertilisers, ice cream, lipstick, paint, cement and toothpaste!