During the South African winter, the Shark Education Centre held a shark colouring competition that gave kids the chance to win some awesome prizes! The colouring pages for the competition were the stripped-down versions of artwork by British illustrator, Marc Dando. Marc’s shark artwork will be unveiled before the end of the year in the form of a poster containing the 13 most common shark species in False Bay. 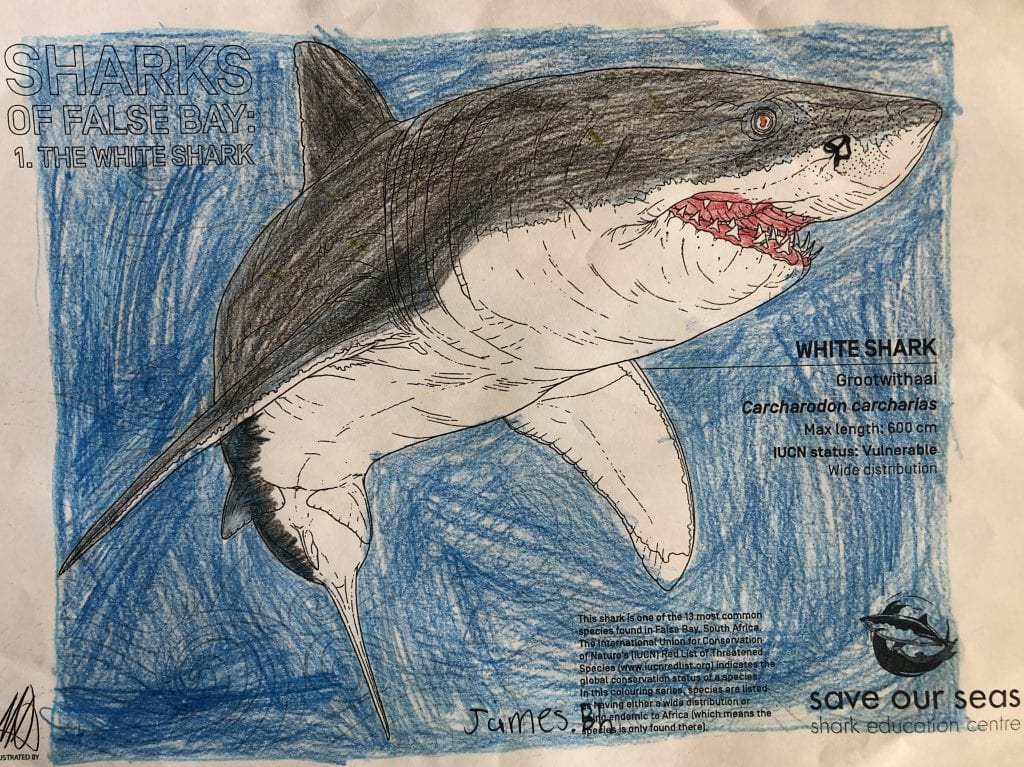 The colouring competition got a great response, with youngsters all over the Western Cape clearly eager to get their hands on some shark merchandise. There were opportunities to colour in some of False Bay’s most iconic and well-known shark species including the white shark, spotted sevengill cowshark, puffadder shyshark and pyjama catshark. 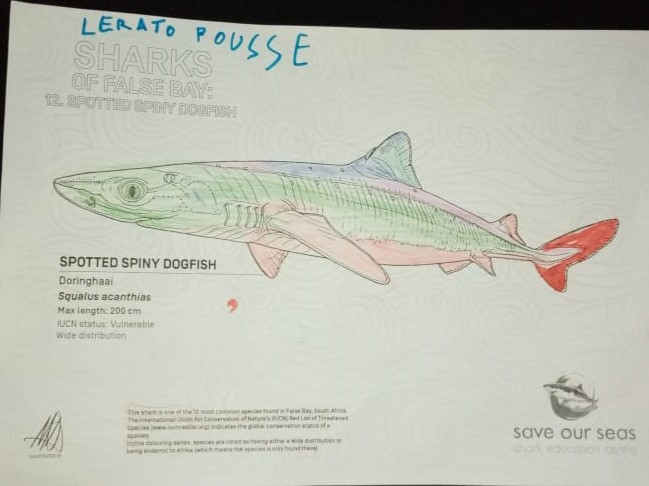 A whole host of artwork was received, sporting sharks with varying colour compositions. It was a breath of fresh air to view the creativity and imagination of the participants.  The two schools that submitted the most entries were Star of the Sea Convent Primary School and Bridge House. 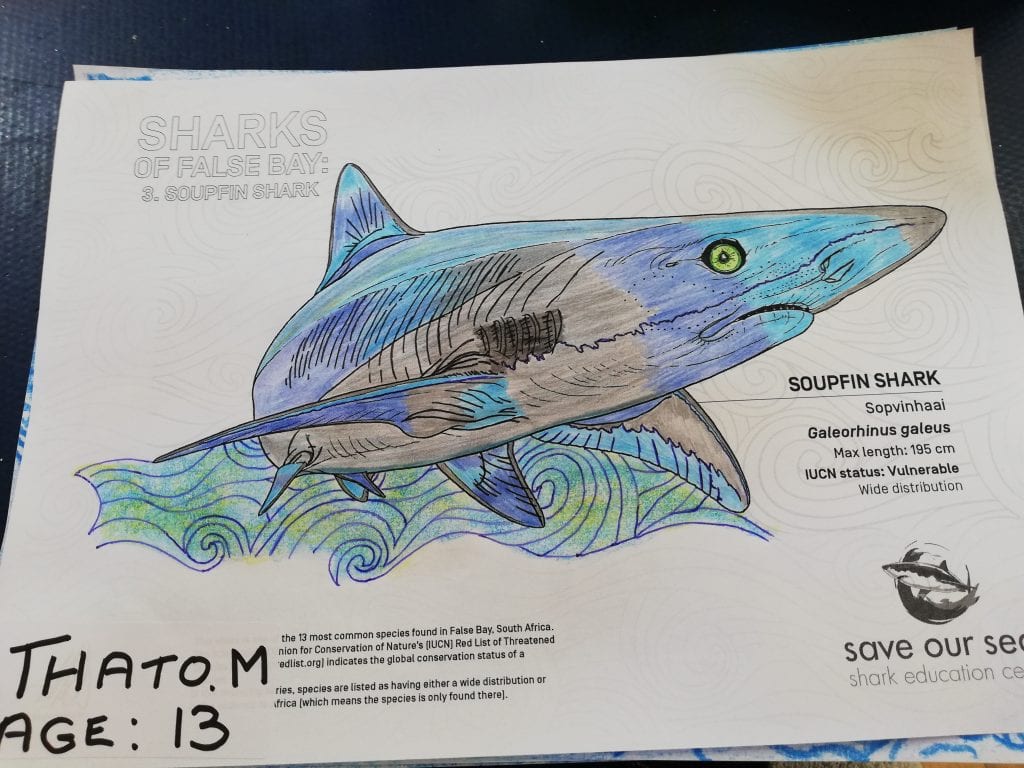 After the submission deadline and all the artwork had been received, five winners were chosen. The winning pieces were chosen by our panel of judges and were based on creativity and colour. Artwork featuring the same shark species was first judged against each other and then against the other species so that all winning submissions represented a different shark. The youngest winner was 5 year-old Lerato who submitted a spotted spiny dogfish with colours that subtly represent the South African national flag. The oldest winner was Thato, 13, who submitted a shimmering soupfin shark. The other winning artwork included a beautiful orange and yellow puffadder shyshark from Nsako, a pyjama catshark swimming in a sea of pink and purple from Manon and a white shark with an ominous-looking red mouth from James. For their efforts, they won a Shark Education Centre cap and a poster featuring the 13 most common species of sharks in False Bay. 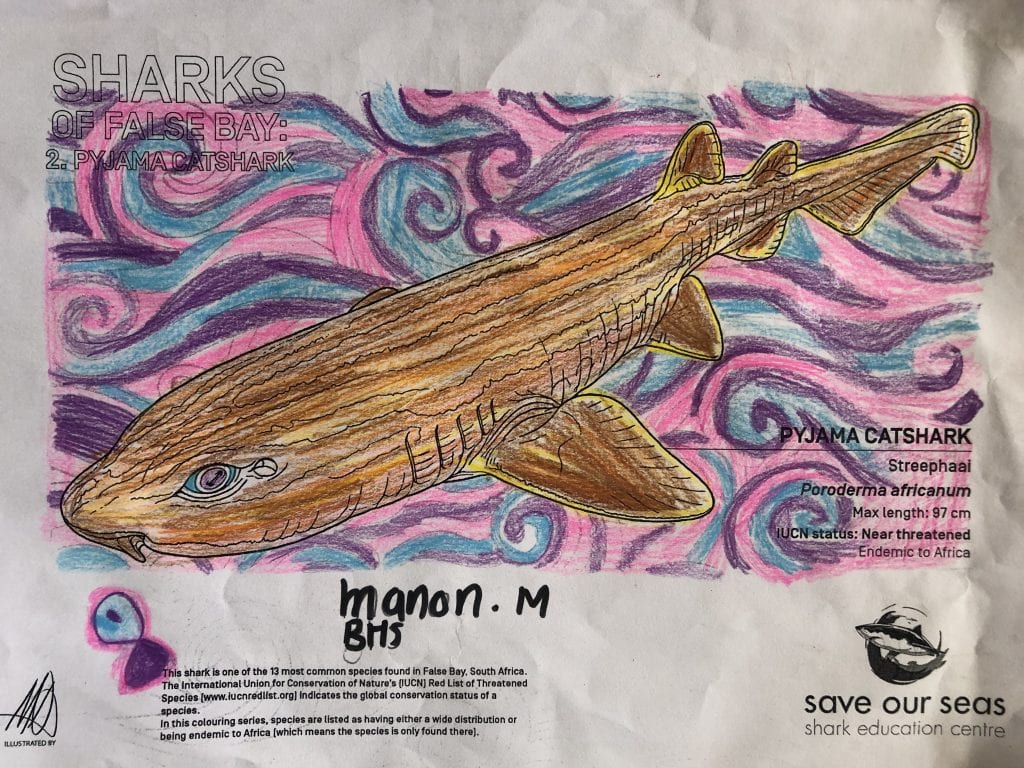 We would like to thank all of those that submitted their artwork during the competition. Keep your eyes peeled for future Shark Education Centre competitions and you could win yourself some JAWSOME shark prizes!